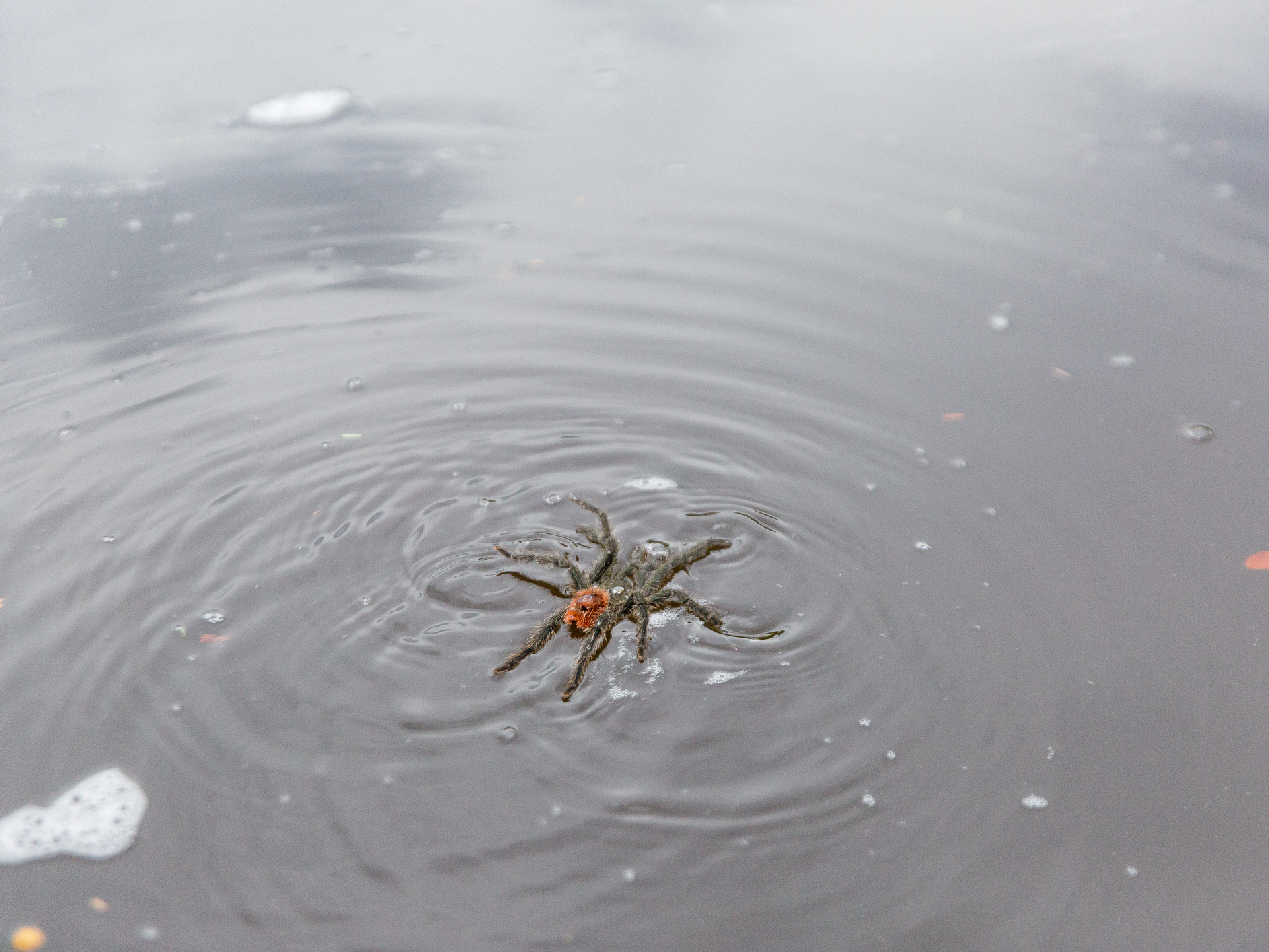 Tarantulas are big hairy spiders that are a nightmare to some while a matter of fascination to others. These big spiders are commonly seen in the rainforests and jungles of South and Central America, Africa, and in the southern part of North America.

It is interesting to note that Tarantulas have been on this planet for millions of years. It is their ability to adapt quickly to changing environments and to live in harsh terrains that have helped them survive.

So, can tarantulas swim? Yes, Tarantulas can swim. But that being said, they aren’t excellent swimmers. Most of these species swim only when they accidentally fall into the water or are being chased by predators. They make use of their long legs to paddle across the water while the air pocket created between their abdominal hairs help them stay afloat.

Many researchers think that it is the ability of tarantulas to swim that has helped them migrate to different islands.

A tarantula’s ability to swim has been a matter of fascination to many people owing to its large size. There have been several kinds of research happening on the Tarantulas’ ability to swim.

These researches did come out with some interesting findings.

In this article, we will look at these findings of their ability to swim and other important aspects of them.

Can all tarantulas swim?

Now that you know tarantulas, in general, can swim, the next obvious question would be whether all of them can swim or not.

There are about 800 documented species of tarantulas all around the world, and all of them can swim. Though they are all capable of swimming, how good can they swim varies with the species?

For instance, the Maningrida diving tarantula, a tarantula that lives in burrows is capable of diving underwater. This fascinating tarantulas are excellent swimmers and are even capable of breathing underwater when they dive. This shows the extent to which tarantulas have adapted themselves to their living environment.

The Maningrida diving tarantulas coat themselves with a waxy secretion that keeps them dry while protecting their book lungs. Apart from this, they are also capable of coating themselves with air bubbles, which they use to breathe underwater.

That being said, you can’t expect all tarantulas to dive underwater. But yeah, they can all survive an accidental fall into the water and swim to the nearest surface.

Can a tarantula survive a fall into the water?

Well, it depends on what heights do they fall from and the type of tarantula you have. Terrestrial Tarantulas, in general, are found to have a fragile exoskeleton that can’t survive even a small fall.

Even a fall from your waist height risks the tarantulas rupturing their abdomen. It doesn’t matter whether they fall on the land or the surface of the water; they won’t survive it.

It is for this reason why experts advise people to be careful while handling a terrestrial tarantula. This isn’t the case with arboreal tarantulas that are found in the wild. These tarantulas have a lighter build, and they can survive a fall even from a treetop.

How do tarantulas breathe while in the water?

Before we proceed to discuss how tarantulas breathe in the water, it is important that we have a brief idea of the respiratory system of spiders and how they function normally.

Not just the tarantulas, spiders, in general, have a pair of lungs known as “book lung” located on the dorsal side of their abdomen.

Their lungs are called book lungs because of the presence of thin and soft plates that resembles the pages of a book. These plates come in contact with the surrounding air through the slits in its abdomen. These slit openings expand and close like a human lung does when we breathe.

So, when a tarantula is swimming on the water’s surface, the book lung opens to water, and it can’t breathe.

Tarantulas have found out a unique solution to tackle this problem. When a tarantula swims, it coats its abdomen with water bubbles, and the slits of the book lung open up to this bubble, and gaseous exchange takes place. But it is important to note that though they can breathe on the water surface, tarantulas don’t prefer swimming.

In many studies that were conducted to learn more about the swimming behavior of tarantulas, it was found that tarantulas aren’t fond of water.

It was also found that the receptors on the legs of tarantulas known as the hygroreceptors could identify the moisture, causing an aversion to water. Only when the spider was threatened or when it suspected danger did they step into the water to escape.

Yeah, tarantulas can float. You might know that if you have seen a tarantula, they have tiny hairs called setae on their body. These hairs are primarily used as sensors, but they also can trap air between them.

Due to the presence of trapped air between these setae, a tarantula can float with ease. It is these air bubbles that are trapped in their setae they use to breathe while they are in the water.

But these hairs must be kept dry for them to keep the bubbles trapped in, right? So how do they do that? These tarantulas can keep their setae dry because of the waxy cuticles that can effectively waterproof them. If you take a tarantula out of the water, you can see that they remain dry.

If you have seen a tarantula, you might understand that most of them are large and weigh considerably. You can’t expect the big tarantulas to float in water only with the help of these trapped water bubbles.

The larger tarantulas can’t float on water as easily as the smaller ones. Even if they are capable of floating, they can’t float for longer periods. The bigger ones’ curl in its legs and stay still in the water.

Not all tarantulas can dive underwater except the burrow-dwelling spiders, also known as the diving tarantulas. As their name suggests, these big guys live in deep burrows that remain submerged during the rainy season.

What makes these diving tarantulas different from others is the fact that they have a very low metabolic rate than the terrestrial tarantulas. It means that they can considerably reduce their oxygen demand and stay submerged for long.

It is estimated that the diving tarantulas can remain submerged for 24 hours straight by surviving using the trapped air. Beyond which they must resurface for air.

How do tarantulas swim?

When it comes to swimming, only a few animals are capable of using their usual motor movement on land to propel themselves through the water. Tarantulas aren’t one among them.

These giant spiders do not use their normal walking pattern; rather they have adapted to a different style to propel themselves through the water.

The major difference lies in the way they use their pair of hind legs. When walking on land, it is this pair of legs that gives them much of the driving force for locomotion. While swimming, this pair of legs are trailed backward and pulled along with them and serves only a minor role in swimming.

It is the anterior three pair legs that do most of the job while a tarantula swims. These legs that are slightly angled act as crude pedals. By angling their legs, tarantulas make use of more surface areas of their legs to propel forward rather than moving their legs up and down, similar to how they use while walking.

It is this ability of tarantulas to change their limb movements in the water that helps them swim. It is also interesting to note that tarantulas can still swim even if they lack one or two legs. They are capable of changing their swimming pattern to compensate for the absence of one or two legs.

This flexibility in limb movement has puzzled the scientific community, and a lot of research has gone into it too. The prevalent school of thought regarding this flexibility points out to an adaptation they picked while being an arboreal insect.

What Does Spider Poop Look Like? (Spider Droppings Pictures)