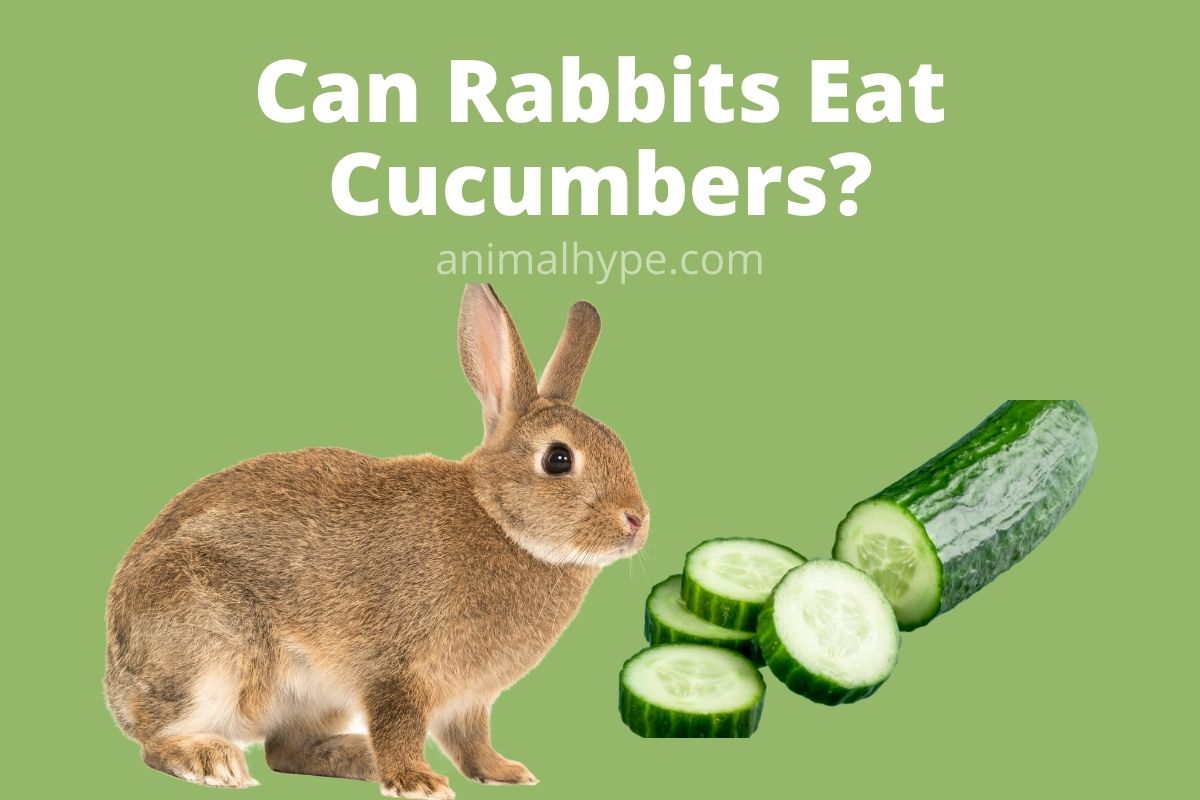 Many people are often intrigued by the idea of having a pet rabbit. Of all the small mammals that can make a good house pet, rabbits are at the top of the list. It’s not so surprising that many people are asking “Can rabbits eat cucumber?”. After all, it is a common vegetable.

Can rabbits eat cucumbers? Yes, cucumbers are a healthy and refreshing snack for rabbits when fed in limited quantities. All parts of cucumbers including cucumber skin, seeds, flesh, leaves, and blossom can be eaten by rabbits without any problems. Cucumbers have low fiber content and are rich in water hence feeding too many cucumbers can lead to digestive problems in rabbits.

The lush green color and crispiness of cucumbers make it an appealing snack for rabbits. However, before you rush out and give your rabbit a whole cucumber treat read on to know more about feeding cucumbers to your little pets.

Are cucumbers healthy for rabbits?

Before you add any new fruit or vegetable to your pet’s diet, your first concern should be its impact on their health. The same is true for cucumbers.

To learn whether these fruits are healthy for your rabbits or not, let’s first take a look at their nutritional composition:

The nutritional value of cucumbers

Health benefits of cucumbers for rabbits

I’m sure cucumbers are sounding just fantastic for your little pets so far.

How many of you have heard of the term “peristalsis”? It refers to the wave-like muscular movements inside our digestive tract, which helps the food inside move smoothly.

It might come as a surprise to many, but unlike humans, rabbits do not have peristalsis. This is why they need a diet that contains plenty of fibers and little sugar for their digestive tract to function smoothly.

While cucumbers do contain fibers, the amount is far too small to meet your pet’s needs. On the other hand, the sugar content of cucumbers is higher in comparison. This makes cucumber’s fiber-sugar ratio quite the opposite of what is ideal for your pets.

In moderation, it might not be a big deal for them. However, if they’re eating too many cucumbers, it could lead to digestive and gastrointestinal problems.

Cucumbers contain too much water.

While water is great for keeping the rabbits hydrated, you must not forget that cucumbers are not the only source of water for them. Too many cucumbers will, therefore, add more water than their body needs.

This can be problematic for your furry pets, for they could easily suffer from diarrhea, ironically resulting in dehydration.

Are cucumber seeds safe for rabbits to eat?

As a pet parent to a rabbit, you must know that they are quite fond of different kinds of seeds in the wild. This means that unless a seed contains some toxic chemical or compound, it can certainly be fed to them.

So, are the seeds present inside cucumbers safe for your furry pets? Yes. These seeds are harmless for all birds and animals and are also far too soft to create a choking hazard for the rabbits. In fact, these seeds make eating cucumbers more fun for your pets. So, the next time you’re feeding cucumber to your pets, don’t bother with removing its seeds.

Can rabbits eat the skin/peel of cucumbers?

So far, we’ve learned that rabbits have no trouble eating the flesh and the seeds of the cucumber. But what about its outer skin? When we eat cucumbers, we peel them to get rid of the skin and eat only the flesh within. Do you need to do the same for your furry pets? No, you don’t.

It might come as a surprise to you, but unpeeled cucumbers are healthier for your rabbits than peeled ones. Wondering why? It is because the highest fiber concentration of cucumber lies in its skin. And because rabbits require a high-fiber diet, leaving the cucumber peel out of their meal would not be sensible.

If you’re worried about the risk of pesticides sprayed on these peels, you should purchase organic cucumbers instead of commercially grown ones.

What about the leaves of the cucumber plants? Are they edible to rabbits?

Since rabbits are herbivores that eat several plants in the wild, it is only natural to wonder whether the cucumber plants are safe for these furry little creatures.

The answer to your question is: Yes, cucumber plants are edible to rabbits. In fact, the plants (leaves, vines, and blossoms) of cucumbers are more nutrient-dense for the rabbits than the fruit themselves.

If you give your pets a choice between the two, they will be more inclined towards eating the plants than the cucumbers.

Can you feed Lebanese cucumbers to rabbits?

Lebanese cucumbers are a small, nearly seedless variety of cucumbers that have originated from Lebanon. These cucumbers have a smooth outer skin and a distinct aroma and are rich in Vitamins A, B6, and C.

Can you feed lemon cucumbers to rabbits?

The term “lemon cucumber” creates a lot of confusion for those who haven’t seen them before. Are these cucumbers citric? Do they taste like lemon? Are they full of juice?

Lemon cucumbers are actually cucumber varieties that range between lemon-yellow and pale-green in color and are round in shape (almost as big as a tennis ball).  They do not taste anything like a lemon but have a mild cucumber-like taste instead. There are a couple of advantages to growing these cucumbers; they’re less likely to develop a bitter taste and can easily grow in cooler climates.

As far as your furry pets are concerned, there’s no reason why they can’t eat lemon cucumbers. These cucumbers have more or less the same nutritional value as regular cucumbers and are also more aptly sized for your rabbits.

Is it okay to feed cucumber juice to rabbits?

Just like cucumber, its juice is also safe for your rabbit’s consumption. However, if you think from a health perspective, raw cucumbers are healthier for them than the juice, since it has a higher fiber content. This is why you should only feed them cucumber juice once or twice a month.

Also, make sure the cucumber juice you’re feeding them is homemade and not store-bought. It is because store-bought juices are manufactured strictly for human consumption and contain many additives and preservatives to give them a longer shelf life. While these chemicals might be harmless to us, to the rabbits, they can be lethal. Therefore, as a safety measure, avoid feeding store-bought cucumber juice to rabbits.

Pickled cucumbers for rabbits: safe or not?

While pickled cucumber is a popular snack among us, feeding it to your pet rabbits would be unwise. Not only are pickled cucumbers processed foods, but they are also highly acidic (as they’re stored in brine or vinegar), which could be disastrous for the fragile stomach of your furry pets.

Can I feed grapes to my rabbit?  Yes. Because rabbits are drawn to all things sweet, they would eat grapes gladly. Moreover, the small size of these fruits makes them even more appealing to your furry pets. However, you might want to keep an eye on how many grapes they’re eating since too much sugar is detrimental to their health.

Is it okay to feed rice to rabbits? No. Unfortunately, rice is not a grain that you should be feeding your pets, either uncooked or cooked. It contains too much starch, low (almost negligible) fiber content, and an overall low nutritional value. Moreover, some pet owners also claim that rice gives stomach ache to their rabbits.

Just like humans, rabbits love to munch on crunchy, fresh cucumber too. Not only are they nutritious, but they’re a healthy treat for them.

However, you should ensure that it doesn’t become a routine part of their diet and you have to exercise moderation while giving cucumbers to your bunny. Cucumbers contain too much water and not enough other nutritional values for a rabbit to survive on.