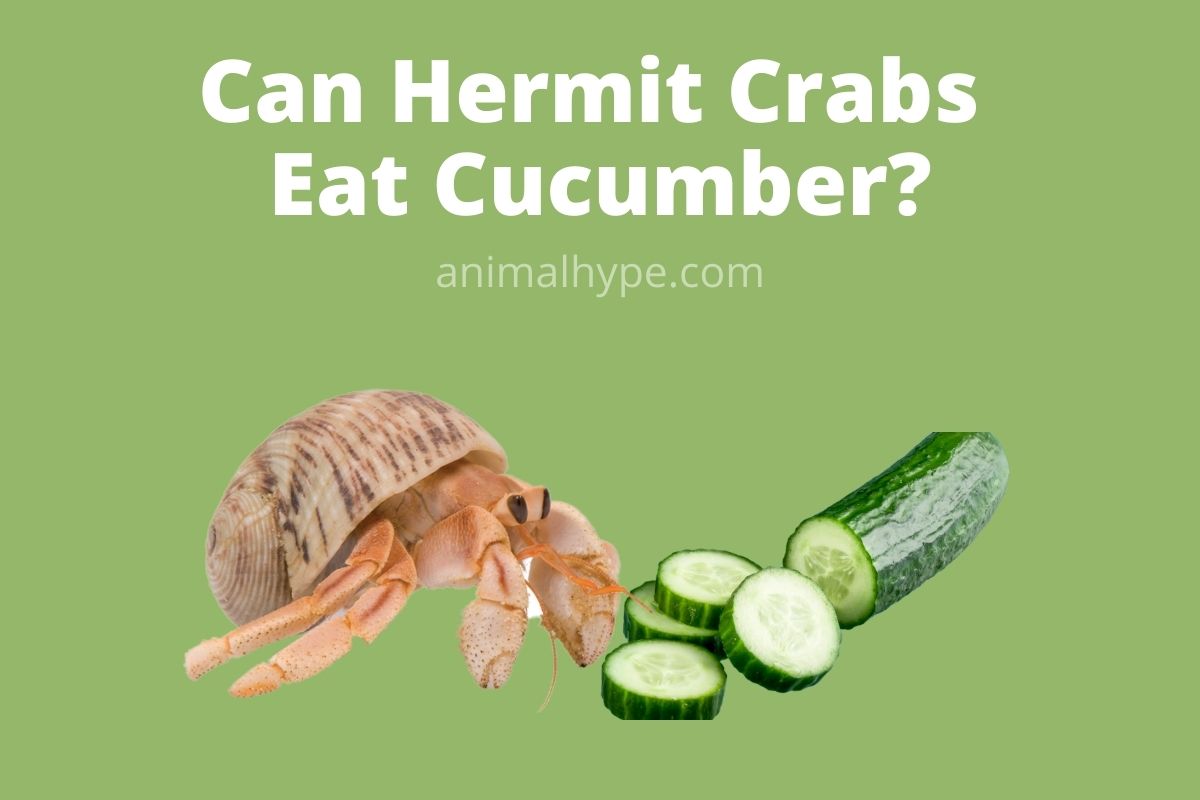 Hermit crabs are crustaceans, part of the arthropod family. Caring for a hermit crab can be fun and easy, especially if you give them a treat once in a while. When it is hot outside and you are trying to figure out what to feed your hermit crab, what better treat is there than cucumbers?

Can hermit crabs eat cucumbers? Hermit crabs absolutely love eating cucumbers because they are light and refreshing. Not only are cucumbers healthy for them, but they’re also easy to digest. Hermit crabs can safely eat cucumber along with its seeds and peel. Make sure that the cucumber is organic and free from any chemicals.

Cucumber is very healthy food for hermit crabs, but you should feed them unpeeled cucumbers. Peel and seeds are ok, but if you want to be careful, simply remove them.

In this article, we will discuss everything you need to know about feeding cucumbers to hermit crabs.

Many studies have shown that hermit crabs choose to eat food based on its smell. Although cucumbers do have a smell due to the presence of phytochemicals in them, it is a very faint smell, somewhat similar to celery.

Therefore, there is a chance that your hermit crabs might not find cucumbers appealing. However, if you’re keen on feeding cucumber to your little pets, you can add a little bit of applesauce, honey, or peanut to it to pique their interest.

Is cucumber healthy for hermit crabs?

As a pet parent, whenever you’re about to introduce something new to your pet’s diet, whether or not it will be beneficial to their health should be your prime concern. Have you been wondering if adding cucumbers to your pet’s diet would be healthy for them? If you have, don’t worry. All your queries will be answered in this section.

Before we begin to talk about cucumber’s health benefits for your pet crabs, let’s take a look at the nutritional value of these veggies in the table given below:

Now, let’s explore how your pet crabs can benefit from eating these nutritious fruits:

Most of us think of cucumbers as healthy and harmless fruits that can be consumed without worrying about moderation, both for us as well as for our pets. So, what could be problematic about feeding these fruits to your hermit crabs? The answer to this is simpler than you think.

Indeed, cucumbers don’t contain anything that can be harmful to your pets. The only problem with these fruits is that if you start feeding them to your hermit crabs too frequently, they might get bored of it.

It has been seen in many studies that hermit crabs can remember what they had eaten today and can easily get bored if they’re eating the same thing repeatedly. It’s because, in the wild, they’re scavengers and hardly eat the same thing twice, which is why they’re used to having a varied diet and expect the same in captivity.

If you feed them cucumbers only once or twice a week, it will keep their interest piqued. It shouldn’t be challenging for you either since there are many other options for treating these little guys that you can go with.

Most of us peel off the outer skin of cucumbers to make them “cleaner.” However, it might come as a surprise to many, but the skin of a cucumber is where all its nutrients are concentrated.

Its thin, green skin is rich in beta-carotene, an antioxidant essential for your healthy eyesight and immune health. Cucumber skin is also rich in insoluble fibers that promote your digestive health and prevents constipation.

Cucumber skin offers the same health benefits to your pet crabs, which is why it is healthy for them. However, before you feed them unpeeled cucumbers, make sure that the cucumbers are organic.

Organic cucumbers are grown in a controlled environment and are safe from all toxic chemicals such as pesticides and insecticides. These chemicals are often sprayed on commercially grown cucumbers and can be lethal to your pet’s health if ingested by them.

What about cucumber seeds? Are they edible to hermit crabs?

Hermit crabs are small animals that can easily choke on the seeds of any fruit or vegetable they eat. This is why it is essential to learn about the ill effects of the seeds of cucumbers before feeding these to them.

Can the seeds present in cucumbers cause any harm to your pet friends? No, they cannot. The small, white seeds are far too thin and soft for the hermit crabs to choke on. Moreover, these seeds are quite nutritious; they’re rich in antioxidants and vitamin K, both of which can be very beneficial for your pet crab’s health.

So, the next time you’re thinking of feeding cucumbers to your pets, don’t be bothered by their seeds.

Can you feed dehydrated cucumber to hermit crabs?

Although hermit crabs would be happy with eating fresh cucumbers occasionally, it is always a good idea to mix things up once in a while. As a hermit crab owner, being creative is one of the most effective ways to keep your pets happy.

But what other way can you feed them cucumbers in? Well, if you have a dehydrator at home, I have a great idea for you.

All you need to do is cut a cucumber into thin slices and dehydrate them; you’ll get crunchy cucumber chips that your pets will enjoy a great deal. Another advantage of dehydrated cucumbers is that they have the same nutritional value as of fresh cucumbers, except for the water content.

Is it okay to feed pickled cucumber to hermit crabs?

Since cucumbers are safe for hermit crabs, have you ever wondered if pickled cucumbers can also be fed to them? If you have, let me stop you right there to tell you that feeding pickled cucumbers to your pet crabs is not a good idea.

These cucumbers are fermented in brine, with salt, sugar, and many other spices added to them to enhance their taste. And as you must already know, spices are not a part of hermit crab’s natural diet and shouldn’t be fed to them.

Can I feed blueberries to my hermit crabs?  Yes, hermit crabs can safely eat blueberries. They’re attracted to the sweet taste of blueberries, and the vitamins, minerals, and antioxidants present in these fruits can make their brain and exoskeleton healthy.

Will hermit crabs eat oats? Yes, hermit crabs enjoy eating oats. Oats are rich in fibers and several other nutrients, making them a healthy treat for your pets. To make oats more palatable for them, you can add honey or fruit slices to them.

Cucumbers are easy to digest, which encourages more frequent feeding, and are also cool treats for hot days. When choosing a cucumber for your hermit crab, look for one that’s dark green, firm, and smooth. This indicates that it’s free from chemicals like wax or pesticides.

I might have gone a little overboard with the information provided but that’s because the topic is just too interesting not to share all I know about hermit crabs.

Hermit crabs are a simple and easy pet to look after and they’re not expensive either. I hope it gave you a few mini-aha moments and some practical tips.

Thanks for reading! If you have any questions about any other topic not covered here, please let us know via email.

Hermit Crab Molting: Everything You Need to Know