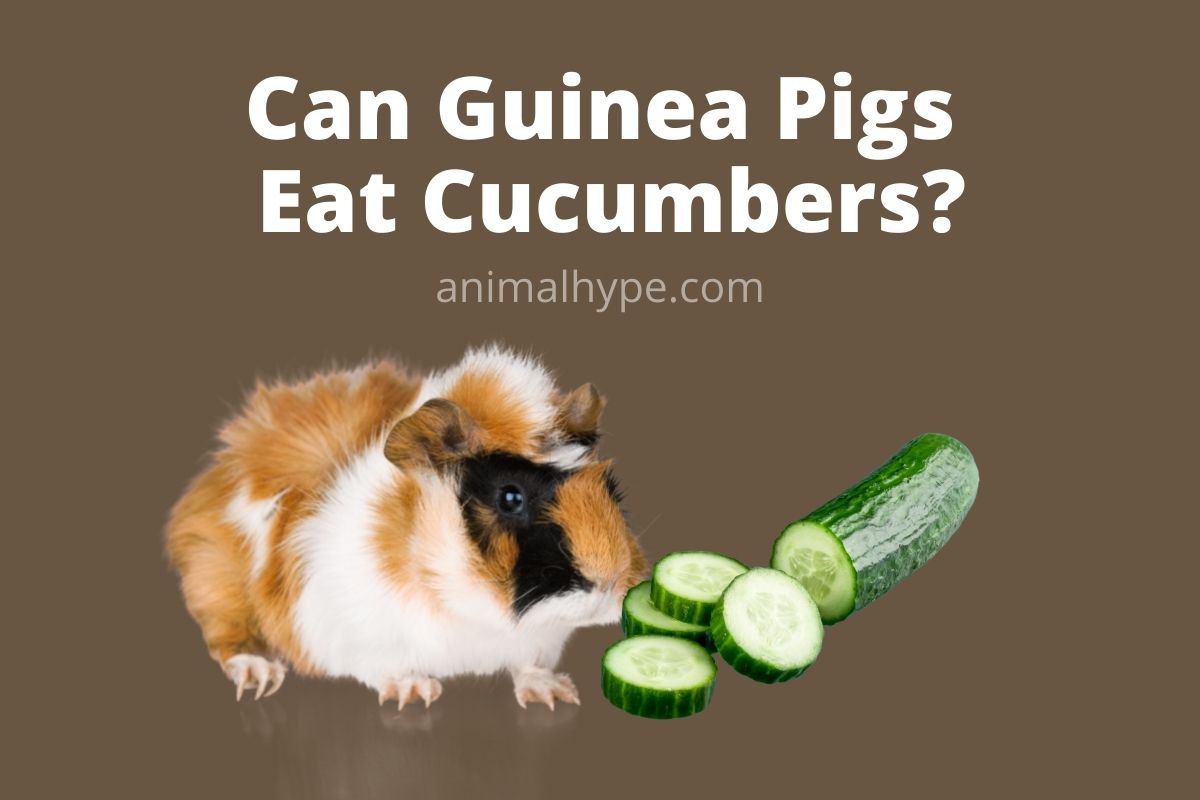 It might come as a surprise to many, but cucumbers are botanically classified as fruits. However, due to their diverse use in the culinary world, most people consider them to be vegetables. While these fruits have only goodness to offer us, it is natural to wonder if your pet guinea pigs will benefit from eating them as well.

Can guinea pigs eat cucumber? Cucumbers are healthy and hydrating treats for guinea pigs. They can eat all parts of the cucumber, including flesh, skin, seeds, and leaves. However, overconsumption can be detrimental to guinea pigs’ health, so practice moderation.

Cucumbers are very healthy treats. for guinea pigs. Guinea pigs can also safely eat other cucumber varieties, like the lemon and the Lebanese cucumbers. They are hydrating, and their crunchy texture is appealing to the guinea pig’s cheek teeth. Also, their vitamin C content is a great benefit for these small animals. However, do be careful not to overfeed them with cucumbers. It contains a lot of water, and it can cause diarrhea if consumed in large quantities.

Stay with me till the end to learn everything there is to know about feeding cucumbers to guinea pigs.

The nutritional value of cucumbers

Let’s take a look at the nutritional composition of these fruits to understand their nutritional value better:

Are cucumbers good for the health of guinea pigs?

Now that you’ve taken a look at the nutritional composition of cucumbers, let’s dive into what these fruits have to offer to your pets:

The only problem that your pets can have from cucumbers is when they start overeating them:

Are the seeds of cucumbers safe for guinea pigs to consume?

As we’ve mentioned above, cucumbers are basically fruits. And when it comes to feeding fruits to your pets, the seeds are often the most worrisome part. Some fruit seeds and pits contain toxic chemicals to your pets, while others are too large or tough and can pose a choking threat.

We know that cucumbers have an uncountable number of seeds, and removing them can be very tedious. Therefore, before you go through all that trouble, let’s find out if it is even necessary or not?

No, it isn’t. The seeds present inside cucumbers are just safe for your pet’s consumption are they are for your own. They’re free from any kind of toxic chemicals and also thin and soft, a little too soft to pose a choking threat for them.

What about cucumber skin? Can guinea pigs eat it?

When the guinea pigs find cucumbers in the wild, do they wait for anyone to peel them for them? No, they simply eat it whole. There’s no reason why you should expect anything different from your pets living in captivity.

Cucumber peel is not only harmless but also rich in fibers and other nutrients. Therefore, an unpeeled cucumber would be a healthier treat for these little guys than a peeled one.

Some pet parents peel cucumbers for their pets to protect them from any toxic chemicals that might be present on the surface. So, if you want to be extra cautious, you can do so, too.

Can guinea pigs eat the leaves of the cucumber plant?

Have you ever seen a cucumber plant? It is a vine with curling tendrils and broad leaves that are arranged alternately. It might come as a surprise to many, but these leaves, when they’re young and tender, can be consumed by us.

But what about guinea pigs? Can they eat these leaves? Yes, they can, but in moderation. While eating cucumber leaves occasionally would cause them no harm, there is one thing you should know about these leaves.

They have emetic properties, which means that you will feel like vomiting if you eat them in large quantities. And even though rodents like guinea pigs can’t throw up, they will feel nauseated and even suffer from gastrointestinal issues if they’re eating too many cucumber leaves.

When feeding cucumber leaves to your pet guinea pigs, always go for the younger, fresh leaves and wash them with water thoroughly beforehand.

The term “mini cucumber” is not a scientific one. It is basically a commercial name used in stores, given to cucumbers that are harvested before time.

As expected, mini cucumbers are small, thin, and seedless versions of cucumbers with extra-thin skin, which is also safe for your pet’s consumption. These cucumbers are quite juicy and have a lower calorific count and fat content, making them an even better choice for guinea pigs.

When you hear “cucumber,” a green, almost cylindrical vegetable appears in your head, right? Well, lemon cucumbers are none of those things. Instead of having an oblong shape, these cucumbers are round (the size of a tennis ball), range between yellow and pale green in color, and have a tender, sweet flesh.

The nutritional value of these cucumbers is somewhat similar to the regular cucumbers; but, since they’re grown as a novelty, they’re more expensive. For your guinea pigs, they’re as safe and healthy as regular cucumbers.

Lebanese cucumbers are a variety of nearly seedless cucumbers that originate from Lebanon, as their name suggests. These cucumbers are significantly smaller than regular ones and possess smoother skin and a distinct aroma.

Lebanese cucumbers have a lower calorific count and a rich source of Vitamins A, B6 (Pyridoxine), and C. They’re both safe and healthy for your pet guinea pigs.

Can you feed pickled cucumbers to guinea pigs?

Pickled cucumber is an almost ancient snack that is still enjoyed in many parts of the world. To make these, raw cucumbers are peeled, washed, and fermented in a solution of brine or vinegar for months.

Feeding even a single bite of pickled cucumbers to your little pets is a bad idea for several reasons. Not only are these cucumbers highly acidic, but they are also processed foods, both of which can have a disastrous impact on the sensitive digestive system of your guinea pigs.

Is it okay to feed cucumber juice to guinea pigs?

If, as a fruit, cucumber can be a healthy snack for your pet rodents, there is no reason why they can’t enjoy its juice occasionally as well. However, if you’re thinking about feeding cucumber juice to them, here are a couple of things that you might want to keep in mind.

First and foremost, the cucumber juice you’re going to feed your pets should always be homemade and not bought from a store. This is because store-bought juices are manufactured solely for human consumption and contain several additives and preservatives that could harm your little pets.

Also, when feeding them cucumbers and their by-products, make sure that they’re eating only fresh cucumbers 80% of the time, with cucumber juice once a month. It is because most of the fruit’s fiber content is lost in blending. This means that the raw cucumbers are more nutritious for your pets than their juice.

Cucumbers are a delicious treat for guinea pigs, as well as all of the other members of the Cavy family.

By now, you should have a good idea of whether or not guinea pigs can eat cucumbers. Hopefully, you also have some good ideas for how to use this information in your own life. From deciding if your partner wants to take on a pet to look after your current pets, it’s good to know the facts. Now you have them all!

We hope the information we provided was helpful. If you have any questions about can guinea pigs eat cucumbers or other fruits or vegetables, please ask us via email. We are here to help you out!