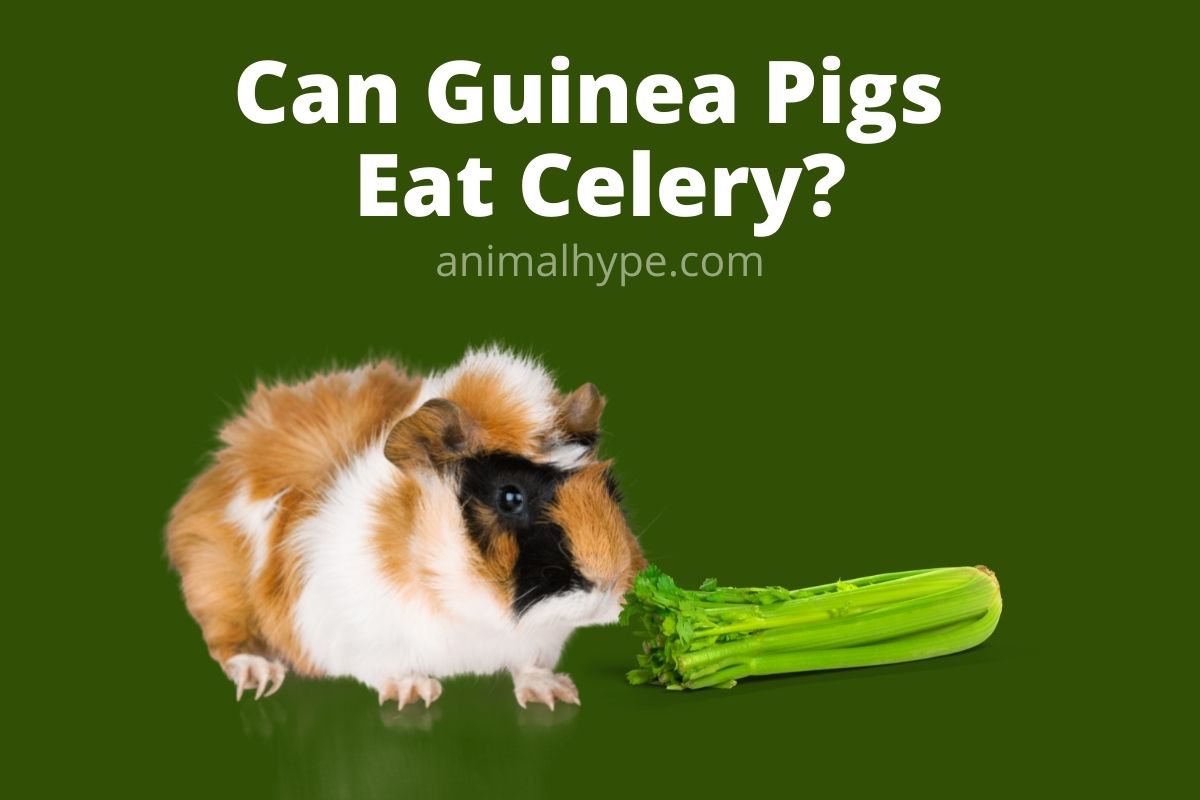 Guinea pigs are becoming increasingly popular pets as they make excellent family pets and are easy to look after. Part of good pet ownership is knowing exactly what kinds of foods and treats you can give to your animal. The wrong food and treats could be harmful or fatal to them. So, can guinea pigs eat celery?

Yes, celery is a great source of vitamins, minerals, and fibers that is a delicious and refreshing treat for guinea pigs. The roots and stalks of the celery are edible to guinea pigs. In rare cases, they may have an allergic reaction to celery so be careful when feeding it the first time.

Celery is safe for guinea pigs to eat in moderation. While celery is not as nutrient-dense as other leafy greens, it still has a lot to offer to your little pets. It has many nutrients and minerals such as Vitamin C, Vitamin K, Potassium, and Folate. You might want to feed them celery in moderation, for it can impact your pet’s health negatively if consumed too often.

Today, we are going to talk about everything you need to know before you include celery in the diet of your pet guinea pigs. Any doubts or queries you might have had about it will be cleared below.

If you’re feeding something to your cavy for the first time, it is normal to feel clueless about how they feel about it, particularly if it is a vegetable. Because while these little guys would easily eat any fruit for its sweetness, vegetables are just not that appealing to them with their negligible sugar content.

What about celery? Do guinea pigs like eating it? There’s no general answer to this question since all guinea pigs have an individual taste; some might like munching on celery, while the others won’t even touch them.

The only accurate way of finding out is by serving it to your pet and checking how they react to it. If they eat it without making a fuss, that’s great. But if they leave it untouched for a long time (4-6 hours), it’s a clear sign that they don’t like it.

The health benefits of celery for guinea pigs

If you’re still with me, it is most likely because your pets have enjoyed eating celery. Now that you’ve gotten that out of the way, you must learn a little about what these veggies have to offer your guinea pigs.

Is celery simply filling up their bellies, or does it add to their health as well?

Before we proceed to talk about it, let’s take a quick look at the nutritional composition of celery in the table below:

While there are many ways in which eating celery can benefit your guinea pigs, you must remember that too much of anything can be bad. This is even more relevant if you have a pet as small and fragile as a guinea pig.

But what are the risks with overfeeding celery to your pets, you ask? Well, here are a few you need to look out for:

When you feed your pet celery for the first time, you should look out for any strange reaction in them for the next couple of hours. And if you notice something, you must feed them plenty of water and avoid serving them celery again.

It is because celery can potentially cause an allergic reaction in guinea pigs in some rare cases.

If we’ve learned anything in the last section, it is that making celery a part of your pet’s daily diet is a bad idea. It should only be fed to them in moderation.

There’s a chance that your pets might like munching on celery and seem to be asking for more, but because they cannot think for themselves, the job falls upon you.

I would recommend you to feed your guinea pigs celery not more than twice or thrice in a week, with every serving measuring half a cup. An even healthier way of feeding them celery is to add a couple of more vegetables with it.

While most of us find the celery stalks too fibrous to eat, your guinea pigs might have a different opinion about them.

Most guinea pigs can safely eat celery stalks in moderation. However, if your pet has a history of bladder stones, it is perilous for them to eat these stalks.

Do you need to de-string these stalks for your pets?

Whenever we eat celery stalks, it is common to de-string them since they get caught in our teeth while chewing the stalks.

Do your pets share the same problem? No, they don’t. You must not forget that the staple diet of guinea pigs is hay, which is far stringier than celery stalks.

If your pets can eat hay without trouble, there is no way the strings present in celery stalks would bother them.

Is it safe to feed celery root to guinea pigs?

Also referred to as “celeriac” or “knob celery,” the celery root is a root vegetable with a rough, bulbous shape and is consumed raw and cooked. While these are edible to your guinea pigs, you will need to wash them thoroughly due to the possibility of fertilizers and pesticides in them.

Also, make sure these are only fed to them as occasional treats (once a month).

Cooked celery for guinea pigs: safe or not?

While your pets can enjoy both raw and cooked celery, the former is a better alternative for them for two reasons.

First, guinea pigs are not used to eating cooked food, which is why you should avoid adding cooked food to their diet as much as possible.

Second, since cooking celery can dilute all the heat-sensitive nutrients present, cooked celery will have a lower nutritional value than the raw one.

Now that we’ve covered almost all grounds let’s discuss how you should feed celery to your little pets.

In this article, we cover the nutritional values, benefits, and risks associated with feeding your cavy with celery. We can also talk about some of the things one needs to know before deciding to give celery to their fur babies.

This post has hopefully provided you with all the information you need to make an informed decision about feeding celery to guinea pigs. But don’t stop there. Knowledge is just the beginning. The next step is taking that knowledge and using it. Put efforts into applying what you learn and continue educating yourself to stay ahead of the curve.