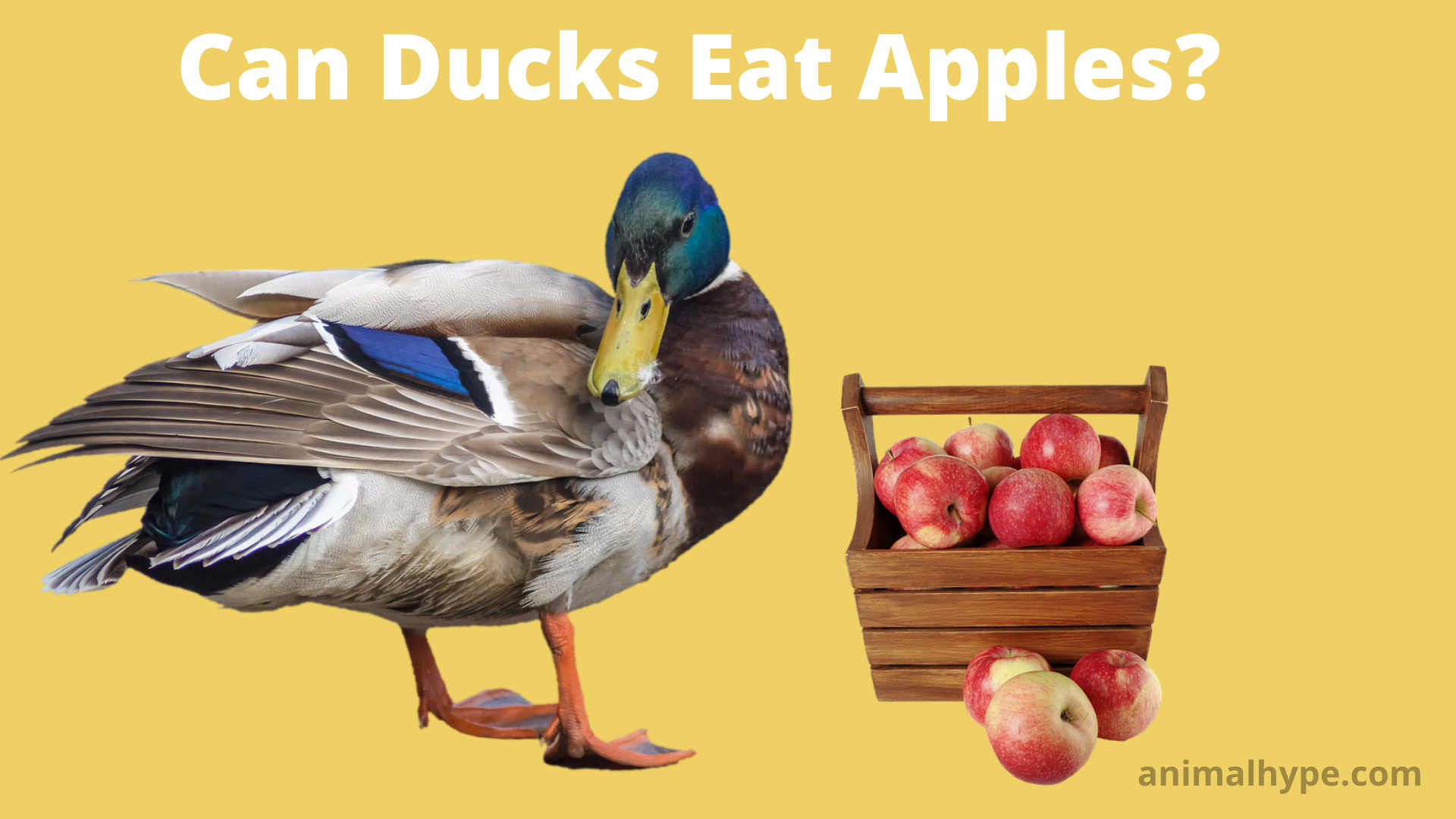 Ducks are one of the trickiest pets to raise and keep, and it’s mainly because of their feeding habits than anything. Ducks can survive on a lot of food, but so many of them are harmful to their health. Apples are often the go-to choice for the owners to feed the ducks as the birds seem to be quite happy, munching on these. But what are the facts behind it?

So, can ducks eat apples? Yes, ducks can eat apples in a regulated quantity and without seeds. The regulation on the number of apples, even though it seems to be a favorite treat, is chiefly dependent on two factors – Sugar content and seeds. Many people feed their ducks, applesauce, or just the apple peels for easier digestion. Apple seeds contain cyanide which is poisonous for ducks.

Ducks have an affinity towards everything sugar-like and sweet. Fructose containing food components are snackable duck food and apparently filling.

As for pets and domesticated ducks, food is quite a challenge, as natural foraging gets restricted to an extent. Therefore, it becomes quite a task to feed and maintain their health. The ducks are known for their habits of eating anything and everything without judging.

Apples, mangoes, bananas are considered as ‘treats’ in the duck diet and are fed occasionally to the pets. Apples in their raw or cooked form are given to the ducks. However, these red, succulent fruit shouldn’t dominate more than 10% of their diet.

Apples shouldn’t be fed as a whole. Chop it up or mash it. You can also soften it on a stovetop to almost banana-like consistency. Anyway, apples are hard fruits and can quickly get stuck in the slender throats of the pets, leading to their death.

Therefore, it’s better to slice them in sized bite pieces for the convenience of the bird’s beak. Furthermore, such big fruits, if given whole, will pose difficulty in breaking down in the stomach.

Why or why not Apples?

Fruits are something that ducks enjoy thoroughly. Walk up to any duck breeder, and they will tell you the same thing, but is it a good idea to feed your duck abundant amount of fructose-laden fruit like apples?

The answer is NO. In spite of what the popular notion goes, Vet’s strongly suggest against stuffing your duck with apples, as it contains sugar, which leads to inevitable obesity. As many might say that fruits are good for ducks as it helps them gather energy, But, according to the experts, the stored and accumulated energy does more harm than good.

Apple pits and seeds are traps for ducks. They often get clogged in the duck’s slender neck and results in choking if not immediately tended to. Also, apple seeds and seeds of other stone fruits like avocados contain a small amount of cyanide and, thus, should not be a part of a duck diet.

In some cases, it has been heard that apples make ducks’ throat go itchy. Mangoes and other citrus fruits have shown a trait of slowing down the metabolism process of the ducks. Aftermath of acid reflux and stomach pains are also observed.

Apples are rich in anti-oxidant, carbohydrates, sodium, and fiber. A small average apple has 83% of water content. With a high sugar component, even the apple peels have quercetin. It helps in cell regeneration and stimulates the production of good bacteria in the guts of the pets.

Different Ducks and Their Foods 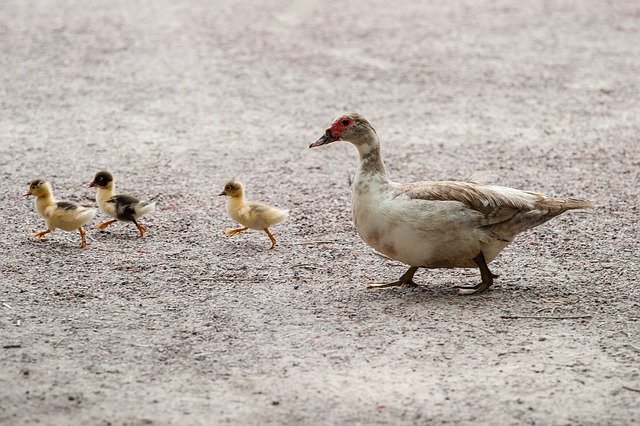 Ducklings are voracious eaters. They thrive on proteins for their growth, and not surprisingly, the protein content requirement in their body is 20%.

Thus, feeding ducklings is quite different from feeding a grown-up duck who would actually consume anything.

These little birds can be domesticated and put under a routine if a surveyed diet is maintained right from the very beginning.

Protein and niacin rich waterfowl starters are grits and crumbles for ducklings. It contains the right amount of nutrients for the webbers to play around.

Chick Starter is considered as the most favorable substitute among all the duck food, and it is medicated and recommended by experts. Although, it has plenty of protein, brewer’s yeast to the mix to boost up the niacin content.

Juvenile ducks are quite volatile in nature. It may seem a bit of a hassle in the initial days, but they are as adorable as the little ducklings. Their feeding capacity has a slight bit of alteration from the previous stage.

They need less protein content in their diet, about 15%. Too much protein can have an adverse effect on the angel wing on them.

Flock raiser feed is the choicest food supplement that many farmers opt for while feeding these teenage ducks. Furthermore, this does not need any other added supplement. A single-serve of ladle makes up for an entire meal.

Adult laying flocks are fully grown and need a lot of nutrition for laying eggs. Here, the protein requirement goes up to 17-18%, and calcium supplements are no joke by themselves. Even chicken stock feed suffices if you cannot get your hands on the duck variant.

From boiled eggs to cracked corn and some fruits like apples and bananas are a good way to go when feeding female waterfowls.

Even more so, green veggies like lettuce, kale spinach, and beans can be added to the diet to spruce it up. Cracked corn, as it seems, must not be given to the ducks as it shows certain dysfunction of the gut bacteria and, in turn, affects their overall health.

Broiler Ducks are usually kept as rearing and poultry stock. They are the ones who end up on the tables of the restaurant and are known for their prized ‘Foie Gras‘. They are usually given a diet of high protein and vitamins.

American Pekin ducks are known for their meat and taste. Therefore, the larger the protein intake, the better the meat quality. They are fed organic foods over bugs and other insects. Carrots, crumbles, pellets, and mashes substitute the worms and are strictly monitored for any disease, on a regular basis.

Foods other than apples

Grits are one of the foods for the ducks of any age. It’s not only filling but aids their metabolism process too. Ducks are known to gobble rocks and specks of dirt.

As ducks are inhabitants of both the land and the water, their diets are also structured to support food from both the areas.

For instance, Mallard ducks eat fishes, frogs, and even small birds sometimes. Oyster shells are enriched with calcium, which makes the egg covering quite sturdy. Keep in mind to remove the mustaches or the whiskers before feeding.

Vegetables are also a healthy choice for feeding the ducks. Chard, Lettuce, Collard greens, cabbage, and all kinds of leafy vegetables make for a great salad even in a duck diet. Peas, carrots, turnips, broccoli can also be added but in limited quantity. However, these veggies must be grated, shredded, or mashed for easy consumption.

Grains, mainly whole, are great for your duck. They must be cooked or boiled are viable ‘treat’ options. Brown rice, whole wheat, quinoa, oats, millets are as nutritious to the duck as it is to us. Sprouted grains such as green lentils, alfalfa, and other related variants can also be given occasionally.

Even some small fishes and eggs can be included. Though it should be minced and boiled. In the case of a female duck, a whole hardboiled egg can be given in the daily diet as it aids in the embryo formation and facilitates egg production. As per the guidelines of the doctors, a meat diet cannot dominate the diet.

In a rustic setting, the food can be thrown in their grazing or rearing area. Poultry stock has all the facilities to adhere to the right breeding and raising of ducks. However, in a restricted space, it is indeed very difficult to find a proper feeding space.

Here, you can take the help of some appliances which are readily available in the market.

Poultry feeder – It is a covered tool that allows the owner to feed the right amount to the ducks without making a mess of the surrounding. Moreover, it can be refilled with the stipulated amount every time so that your duck isn’t over or underfed at any point.

Poultry waterer – Water is a crucial component of any diet. But most of the pet owners overlook it especially, the duck breeders, as they believe that since ducks are swimmers, they can fend for their own water. The focus is on clean water over anything.

A waterer is a cylindrical structure where water is kept in a shielded way to feed the ducks. It also ensures minimum wastage. Many ducks fall sick by drinking polluted and contaminated water.