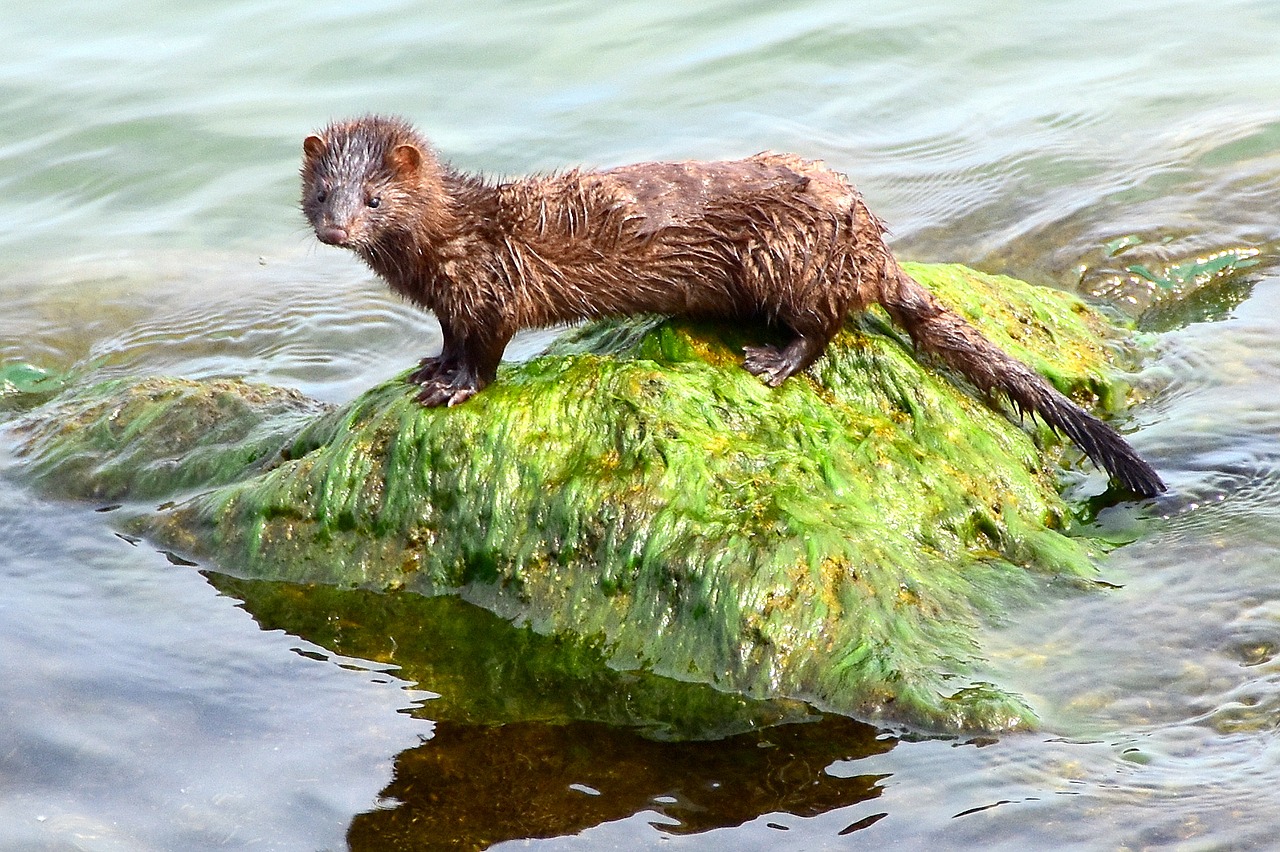 Minks are mammals with valued fur. They are small in size with long and lean bodies. Their legs are short and they have pointed claws and snouts.  They have a long and thick tail, one-third of the body length is just of the tail.

Mink is an interesting creature about which most of you would want to know.

In this article you’ll get to read about Minks in complete detail, as to what they eat, can they kill other animals, where they live, their predators, etc.

So, what do minks eat? Minks are carnivorous mammals that are active during the night. They love to prey on a creature of their size or smaller; like Chicken, Rabbits, Frogs, Mice, Muskrats, Water Fowl, Water Beetles, Crayfish, Snakes, Earthworm, Insects, Grasshoppers, and even Birds. It kills the prey by attacking its neck first. Some species of Mink also consume vegetables or plants.

Mink’s diet keeps changing with the change of season. They do not hibernate but they do store the extra or leftover food in dens. These dens are dug by them near river banks.

They can also use hollow logs as dens. When they are not in a mood to work hard, they use abandoned dens of Muskrat and Beaver. To avoid predators, they don’t use the same den for a very long time. They keep changing their den often.

Minks hunt down a variety of species starting from terrestrial vertebrates, to aquatic crustaceans, to birds. They are also a threat to the chickens kept in the houses as pets.

The most preferred prey for Minks is a muskrat. A Muskrat can give a tough fight to a mink that is trying to prey on it. Minks can catch muskrats more easily in water because Minks are faster in water.

They use all their four feet for propulsion whereas the muskrat uses only its back feet and tail that acts as a rudder to swim and escape their predator.

As a mature and healthy Muskrat is difficult to catch, Minks target the weakened and diseased ones. They also consume dead Muskrats if they are very hungry and if the meat is fresh.

They weigh from about 700 to 1,600 grams and are 46 to 70 centimeters in length. European Minks are smaller; they weigh about 440 to 739 grams and are somewhere around 31 to 38 centimeters long. Both these species can be found near water bodies that are lined by trees such as lakes, ponds, streams, etc.

They hunt and mark their territory during the dawn and dusk hours. Their homes are dens made by digging or some hollow wood logs. Minks like to make their dens cozy. They add leaves, grass, and fur from their prey to make the den warm and nice.

Minks are loners or in simple words, solitary creatures that come together only when they have to mate. They are shy creatures who lose all inhibitions only when their curiosity is aroused.

The male minks can’t tolerate other male members of their species. Fights between Minks are a very common sight. They mark their areas with strong-smelling substances that are released from there scent glands.

When Minks find their preferred meal, they don’t start eating the prey from any part, they first bite down on the neck of the prey and kill it. They are adept climbers and swimmers. They can climb walls that are very high and can also swim underwater at a depth of 100 feet. They can even dive to a depth of 5 meters.

Mink spends ample time in the water in search of food. It can hunt many sea creatures by diving deep inside the water. Just like a skunk, Minks can also spray anything that threatens them with a foul-smelling liquid. The only difference in this spray technique of skunks and Minks is that minks do not have the ability to aim its spray whereas skunks do that have that skill.

The happiness of Mink can be made out by the purring sound (like a cat) it makes. Minks have very strong communication ways. They communicate using visual signals, sounds, and odors. For finding mates and heading home they rely heavily on smell. When they move around, they are fairly quiet.

Minks and their Offspring

Minks mate during the January to April months. They might have multiple partners.

The American mink species have a gestation period of 40 to 75 days whereas the European Minks gestation period lies between 35 to 72 days. Mink babies are called kittens and at one time the female can give birth to one to eight kittens.

Mink kittens are weaned at the age of 6 to 10 weeks. The duration for which they stay with their mother depends on the species.

Mink Predators and how Minks save themselves from them

Minks don’t really have several predators. They are clever enough to outsmart most of their predators. Being fearless and aggressive creatures their natural enemies are very few.

Very occasionally Minks are killed by bobcats, coyotes and a few other carnivores. The biggest threat for minks remains humans. Never do Minks hesitate from fighting a predator much bigger in size. Mink kittens can be taken by a few predator birds and snakes.

The secretive and agile nature of Minks saves them from its predators. Also, their fur color makes them blend well with the natural background hence it’s easier to avoid most of the enemies. Their vision, hearing power, and the smell is excellent.

They have a bounding gait that makes them move from one place to another even faster. They can remain in warm water for up to 3 hours but lesser in cold water. When snakes try to attack the young ones of Minks, they will fight back and kill the snake. They do not consume snakes.

Mature Minks have 34 teeth in total with 4 canine teeth that they use to kill their prey or fight their predators. The five toes on each foot are webbed which helps them in swimming. The tail is fully furred hence they are saved from supersaturation of the skin on remaining for long hours in water.

The peculiarity about Mink Fur

The fur color can be seen from brown to black. The fur is very thick and soft. The hair in the fur has an oily guard which makes the fur waterproof.

The oil obtained from the Mink Fur is the closest in its composition to the oil in the human skin. It is used by many people around the world on their body and faces.

This Mink oil contains 17% of palmitoleic acid. This acid is a very essential Omega 7 fatty acid that the body of humans also produces. Many times Minks are trapped by humans only for their fur.

The Male Mink can travel up to 25 miles or more in search of food. They have many dens in that area which they use to rest and store food. Female Minks only travel about 20 acres and that too in the night.

It is believed by many wildlife researchers that the Male Mink returns from its travel once every week. They follow the same route and search the same area for food as it is believed to be safer and protected on the paths seen before.

Minks can stalk and trail its prey on land and even in water. They are opportunistic hunters who startle their prey, fight them, and eventually kill them. They are only occasionally active in the day but mostly they hunt and travel in the night.

Do Minks eat Chicken? Yes, Minks do eat Chicken but they don’t consume every chicken they prey on. They are known vicious predators of not just chicken but other birds too. They sometimes drink only the blood of chicken or their prey and that in itself acts as a motivation to kill all birds in their area.

Do Minks kill Cats? Yes, Minks can kill Cats and also rabbits or any other creature of that size easily.

How to keep Minks away? Minks can be dangerous for your pets. They can be kept away by closing the tiniest entry spaces. Put thin wires that are used in chicken coops to keep them away from a certain area. Metal flashing and expanding foam can also deter them.

Can Minks Climb? Yes, Minks can climb about anything, from walls to trees to buildings. They can even pass through a two-inch hole. They are good at digging too and can dig under the fence.