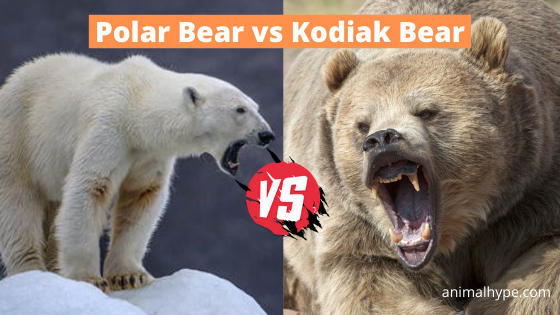 The Polar Bear and the Kodiak Bear are two of the largest bear species still alive. What if the two beasts went head to head in an intense battle never seen before? Who do you think will prove to be the mightier bear and win the title of the ultimate champion among its species?

Both animals are massive in size, easily towering above the average human. The Polar Bear and the Kodiak Bear have no natural enemies. They are top predators who rule the wilderness they inhabit. But who will prove to be the mightier beast? Let’s find out.

Let’s get to know the two bears

The Polar Bear lives in the Arctic Circle region—one of the coldest areas on Earth. They have a thick coat of fur which insulates them from the cold. White in color, they easily blend in with the surrounding snow and ice. Underneath their fur, they actually have black skin, which absorbs the sun’s warmth better.

Kodiak Bears are only found in the Kodiak Archipelago towards the Southern part of Alaska, USA. This is where they get their name from. They are a subspecies of the brown bear, also known as Kodiak Brown Bear or Alaskan Brown Bear.

A full-grown Kodiak Bear weighs between 700 to 1500 pounds at the most. It stands tall with a head and body height of 8 feet. The shoulder height can measure up to 4 ft 4 inches. A Kodiak Bear’s average lifespan is about 20 years.

70% of Polar Bear’s diet consists of meat. They primarily hunt seals as the Arctic region is home to plenty of seals. They may also prey on birds, bird eggs, walruses, narwhals, and beluga whales. Polar Bears have been observed to feast on dead whale carcasses as well.

Living near the coast, the Kodiak Bear loves to gorge on salmon. When it’s not the salmon season, they can survive on vegetation like fruits, nuts, roots, berries, or seaweed. They also prey on rodents, deer, and mountain goats from time to time.

Comparing features of a Polar bear and a Kodiak bear

Strengths and weaknesses of the two predators

Who has the better odds in a fight between a Polar Bear and a Kodiak Bear? Let’s weigh their strengths and weaknesses to find out. 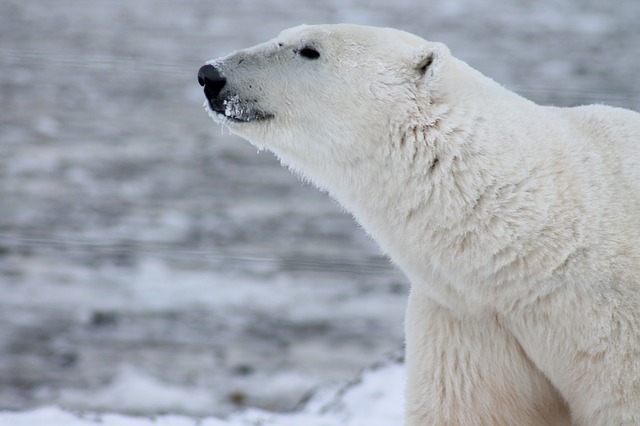 When it comes to bite force, Polar Bears take the lead again. They have one of the strongest jaws with a bite force of 1200 pounds per square inch. A Kodiak Bear can boast a bite force of only 930 pounds.

Speed is an essential factor in any fight, whether it is to outrun your enemy or sweep in and grab your prey. The top speed of a Polar Bear is only 25 miles per hour. On the other hand, a Kodiak Bear can reach a top speed of 30 miles per hour, effectively outrunning the former in a hypothetical battle.

If it comes to a fistfight, a Kodiak Bear’s claws can do a good amount of damage to any opponent. They have long and straight claws measuring between 3 to 5 inches. In comparison, a Polar Bear’s claws can measure up to 3 inches only.

Owing to its huge size, a Polar Bear has massive paws which maybe nearly 12 inches wide. A Kodiak Bear’s paws are slightly smaller with a width of 9 inches. 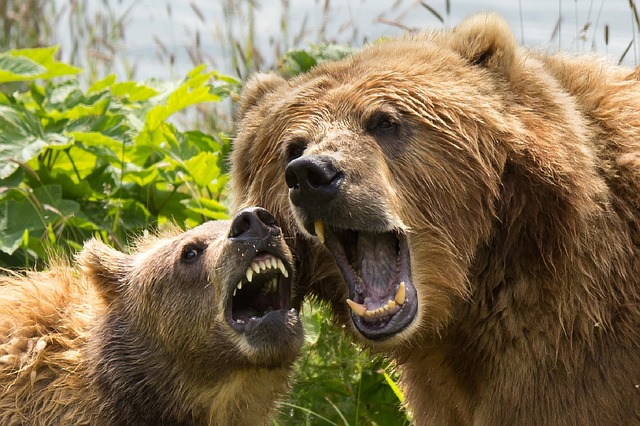 If we compare appetites, a Kodiak Bear consumes nearly 20,000 calories of food in a day. A Polar Bear, although bigger in size, needs only about 12,000 calories on an average day. This is because they don’t move around a lot, preferring to conserve energy for seal hunting.

Finally, who is the deadliest bear of the two? If we look at the stats of humans attacked by bears every year, the numbers are pretty low for both. Only 1 person every year is reportedly injured by Polar Bear attacks. Kodiak Bear attacks come to a total of 1 to 3 persons every year.

Polar bear vs Kodiak bear: Who is our ultimate champion?

Looking at their strengths and weaknesses, our two fighters seem well-matched for each other. A hypothetical fight between a Polar Bear and a Kodiak Bear is sure to be an intense one! But who will take the winning trophy home and become our ultimate champion? Any guesses?

Size matters, doesn’t it? A Polar Bear is the bigger and heavier beast of the two. In fact, it is the largest of all living bear species. Weighing a massive 1600 pounds at most, fate may definitely weigh on the Polar Bear’s side.

However, a Kodiak Bear does prove a tough opponent. It is faster than the Polar Bear, boasting a top speed of 30 miles per hour. Kodiaks are also known to be deadlier when it comes to attacks on humans.

A Kodiak Bear has long and sharp claws measuring up to 5 inches in length. With their huge paws and deadly canines, they can surely hold their ground if it comes to a grueling fistfight.

When it comes to hunting skills, Polar Bears are way ahead of the Kodiaks. Kodiak Bears mainly rely on easily found vegetation for food, whereas meat is the major part of the Polar Bears diet. They are experienced hunters with an exceptional sense of smell and powerful paws to nab any prey.

Kodiak Bears are not great hunters. They live near the coast and have plenty of food sources available to them. They don’t waste their energy hunting. In fact, they are quite non-aggressive and live in close proximity to humans.

Will a Polar bear and Kodiak bear ever meet in real life?

Nope. Not a chance. Polar Bears inhabit the Arctic Circle region, where temperatures are very low, and floating ice sheets surround them. On the other hand, Kodiak Bears are solely confined to the Kodiak Archipelago in Alaska, USA.

The possibility that the two bear species will ever meet and go head to head is almost zero. They live far apart, belonging to two different climatic and geographical zones on the planet. A battle between the two can only be a hypothetical one.

Polar Bears inhabit one of the coldest environments on Earth. The harsh climate and scarcity of food options make survival a real challenge in the Arctic. Only those who can adapt can survive in such a habitat, and the Polar Bear is one of them. It is the top predator of the Arctic, with no natural enemies.

Polar Bears have better hunting skills than the Kodiak Bear. In fact, they are the most carnivorous of all bear species. On the other hand, Kodiak Bears prefer a vegetation diet, eating whatever they can easily find. Living in close contact with the human population in the Kodiak islands, they have also become used to eating garbage. They lack the sharp hunting skills of the Polar Bear.

Therefore, we have finally arrived at our final verdict. Both Polar Bears and Kodiak Bears are perched on top of their food chain in their natural habitats. But the Polar Bear proves to be the ultimate champion among its species.

Hence, in a hypothetical battle between a Polar Bear vs a Kodiak Bear, the most likely winner is the Polar Bear—the King of the Arctic Circle!