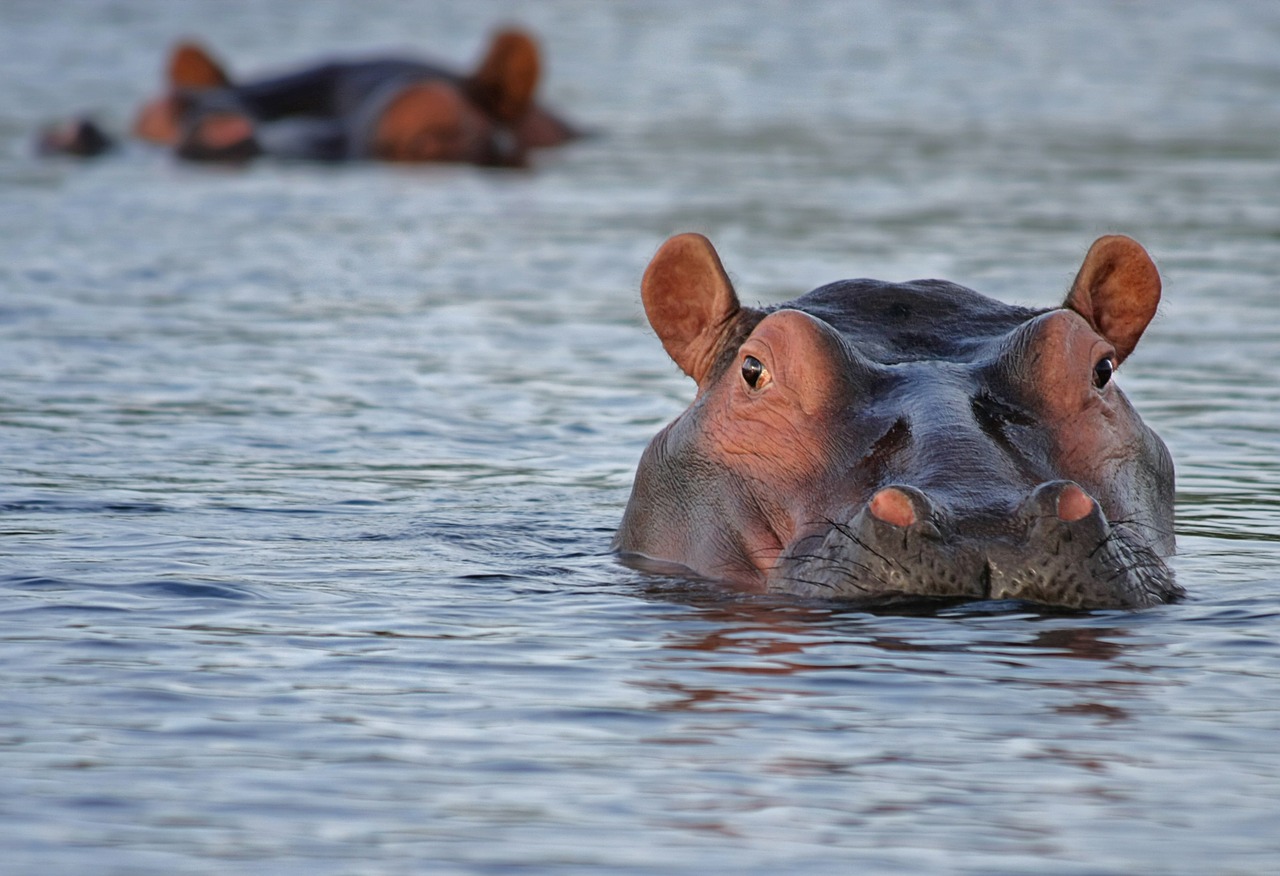 Wildlife brings numerous unbelievable realities into existence every day. One of such wildlife mystery is Hippopotamus Amphibious. Hippopotamuses aka Hippos are semi-aquatic mammals. It means that these mammals (i.e.., Hippos) inhabit in water bodies but not completely. Hippos settle half of their bodies in water to adopt an aquatic lifestyle. Among the lovers of nature and wildlife, one question whether hippo actually swims or not remains the same!

So how fast can a hippo swim? Hippopotamuses can swim at a speed of 8 kilometers per hour under water. Because the weight of hippopotamus is at least 1500 kg, it is considered a difficulty to swim underwater with no natural gills.

It is noteworthy to mention that these amazing creatures of nature do not inhabit in any water bodies but only slow-moving rivers and lakes. Hippopotamuses are mostly found in the rivers and lakes of Sahara desert in Africa.

Let’s take a look at various subjects that supports the theory of Hippopotamuses, their semi-aquatic lifestyle and swimming underwater.

Given the average body weight and body structure as non-comparable to any aquatic mammal, hippos still survive and live most of their lifespan in water bodies. In fact, hippos cannot swim but they actually move their bodies underwater and survive via charging through the water bodies according to the climate required.

According to various studies, it has also been concluded that hippos are willing to hold their breath for minutes which allows them to not only dwell their bodies partly in an aquatic environment but entirely as well.

Hippos hold their nostrils closed while they settle down their bodies underwater and hold their breath for over 5 minutes. While moving underwater, hippos may jump back at the surface of the water to breathe. This is how hippos survive underwater their whole lifespan.

Why Do Hippos Swim Rather Than Live On The Ground?

The ‘hippopotamus’ is a Greek word which stands for “river horse.” The fact that hippos are not comparable to a horse in the context of weight, body structure, and lifestyle, these cumbersome animals are still called river horses because of their survival and unique verve underwater.

Hippos have an exceptional skin type that demands wetness through a dry season. It is noteworthy to mention that hippos do not sweat in order to gain a cool and calm impression within their body system. Hippos cannot survive too long on the ground as their bodies start to dehydrate and in the absence of sweat glands, there is a higher chance of blood sweat.

Yes! Instead of sweating, hippos’ body pours sweat blood which further transforms into a layer of mucus. It helps to moist the body. In fact, blood sweat layers on the hippo’s body decrease the potential of diseases and deadly infections from dirty water bodies.

As per studies, it has been concluded that at an average level, a hippo lives 16 hours underwater per day and only reaches the ground to hunt for food. Their primary food is grass.

More often than, human being find it very irrelevant and miraculous that Hippos can swim and live underwater for more than 75% of their lifespan. However, it has a scientific explanation behind it. Hippos gain neutral buoyancy underwater beside their round and heavy physique.

Hippos have a natural osteosclerotic disorder in their appendicular skeleton i.e.., their bones harden abnormally and the bone density elevates. This disorder leads to extra bones weight along with body weight. Thus, using their bone weight and elevated bone density, hippos gain neutral buoyancy underwater and swim/walk underwater without any resistance.

In the absence of osteosclerotic skeleton, hippos would need to struggle to adopt a semi-aquatic environment because a large amount of energy would be required to linger underwater and light-weight bones can lead them to drown in water bodies in no time.

Indeed, studies state that due to osteosclerotic disorder leading to the extra heavy physique, hippos position three feet at the ground while walking. In simple words, hippos are not themselves willing to handle their heavyweight and walk on the ground for a long time.

Hippos need the support of 3 feet on the ground and one to step to walk. As compared to the struggled walking, hippos swiftly go swimming in water bodies to reach one place to another. For example, when it comes to the change in the climate, hippos leave the dry habitat and move to a cooling habitat through river bodies.

More often than not, hippos only consider to leave a habitat when it is no more “wet-dry season” as completely dry habitat can lead to lack of vegetation i.e.., starvation and body overheating for hippos. Hence, hippos shift from the dry location before lakes and rivers dry out.

It usually comes out as an extensively outstanding lifestyle adaptation that even after being only semi-aquatic mammals with a uniquely heavy physique, hippos actually sleep underwater. An adult hippopotamus can hold his breath for about 30 minutes under water.

Hence, while sleeping underwater, hippos jump to the water surface after a gap of 20-30 minutes due to body reflexion, inhales fresh air and dwell back into the deep water. It is noteworthy to mention that during this underwater respiratory process, hippos do not wake up from their sleep.

Hippos’ osteosclerotic appendicular skeleton i.e.., abnormal body and bones weight allows the body to settle down in the aquatic environment for hours without any struggle.

Can Hippos Swim In The Ocean?

The general answer is No, as most hippos can’t swim in deep water. As we have discussed above, hippos actually do not swim, they walk underwater. For that reason, if the water depth is quite large such as in the ocean, hippos are unable to go beyond one certain level.

The surprising fact is that a few subspecies of hippos have actually evolved to swim in deep water due to their less density body structure.

According to various studies, it has been concluded that Hippos can swim in the ocean only when there is a stable water level. Few wildlife researchers around the world have come across timelines where Hippos have been recorded swimming in the oceans like the Atlantic Ocean.

Hippos can be found in sea and oceans of southern Africa. Undoubtedly, oceans are quite large and deep, it is difficult for hippopotamuses to swim through it. However, a countable population of Hippopotamus is caught inhabiting in blue waters of the bay.

Hippos can manage to float their bodies in the deep water of the ocean and body reflexion helps in jumping to the surface of the ocean water after every period of a few minutes.

Hippos cannot drown in water bodies as the heavy bone structure helps the body to stay at the water surface and evaluated body allows a balanced walking underwater. It is noteworthy to mention that Hippos’ ability to move in locomotion style also allows Hippos to sleep underwater without drowning.

How Do Hippos See Underwater?

It is quite amazing to learn that Hippopotamus amphibious can see underwater. In fact, when hippos dwell their heavy bodies underwater, a pair of clear membrane covers the surface of eyes and allows hippos to see underwater. These membranes are naturally built-in and appear like ‘goggles.’

Thus, even though hippos need to close their nostrils and ears underwater to protect themselves from drowning or water entering into ears, they can easily keep their eyes open, watch and observe the underwater aquatic environment clearly.

Hippopotamus diets include small grass and reeds grown in the grasslands surrounding the water bodies. Hippos do not eat aquatic plants in water as they cannot manage to eat with their nostrils and ears closed. Also, hippos graze on grass on the ground only.

They graze on grass mostly at night time for around 5-6 hours and dwell back into the water bodies before sunrise. When it comes to the scarcity of vegetation due to dry season or climatic condition, hippos eat meat or even birds around their territory.

In such bad climatic conditions, hippos can eat aquatic plants; however, aquatic plants are much less in portion as compared to a regular diet for hippos. It causes the population of hippos to change to a different location.

Can Hippos Live Without Water?

Hippos are semi-aquatic and hence, water bodies are considered as a significant part of their lifestyle. Hippos are found only in a surround with the dry-wet season as it allows access to eatable vegetation and slow-moving water bodies to protect the body from overheating.

Hippos do not have sweat glands, thus, they do not sweat and the body remains highly heated if not dwelled into water bodies. Therefore, hippos cannot live without water. Indeed, hippos more often graze enough food and store in their stomach for days to avoid leaving river bodies.