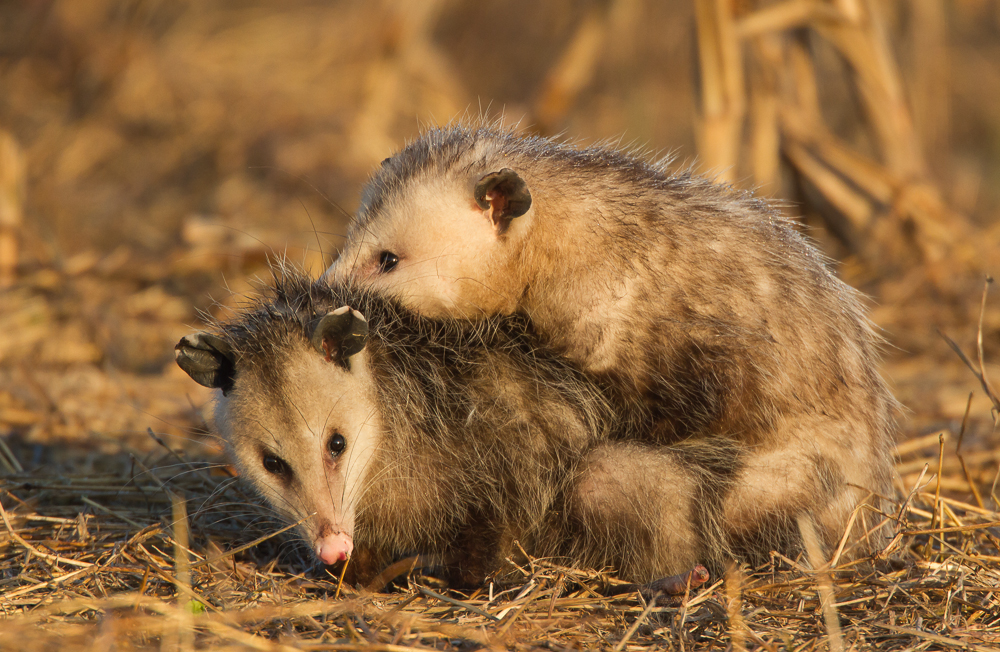 So, how do opossums mate then? Actually, the forked penis of the male is correlated with the structure of the female reproductive tract, which branches into two parts a short distance from the outside opening, and opossums mate in the same way as do other animals.

People usually give a funny answer to how opossums mate one of which is shared below.

At the time of mating, according to one story, the forked organ of the male is inserted into the nostrils of the female, and the male cells or sperm are deposited within the nasal passages. The female then supposedly thrusts her nose into her pouch and blows vigorously. In this way, the male cells are deposited in the pouch where it is believed, fertilization of the eggs takes place and the young pass through their complete development.

The male opossum does have a forked reproductive organ, but reproduction does not take place as outlined above.

However, what actually happens afterward is almost as amazing as the story just related. After they are conceived the developing young ones remain within the body of the female for about 12 days and are born in a very immature stage of development.

Each of the young (from eight to as many as twenty-one) is actually smaller than a honey bee, and so unlike the adults in appearance, that no one unfamiliar with this type of reproduction could possibly recognize them as opossums.

At one time it was thought that the female helped the young into the pouch, but direct observation has since revealed that they clamber into it by themselves, using their strongly developed front legs to scramble through the hair.

Once within the pouch, each of_the young opossums swallows one of the nipples or teats, attaching themselves so firmly that it is almost impossible to pull them loose. If there are more young opossums than there are teats, which happens occasionally, only those fortunate enough to locate a mammary gland will survive; the extra infants will all die.

After remaining within the marsupium for about 70 days, the young emerge but remain with the mother for some time. As she travels from one place to another they cling to the hair of her body.

Sometimes the female curls her tail over her back and the young attach themselves to it by their own tails and dangle head downward.