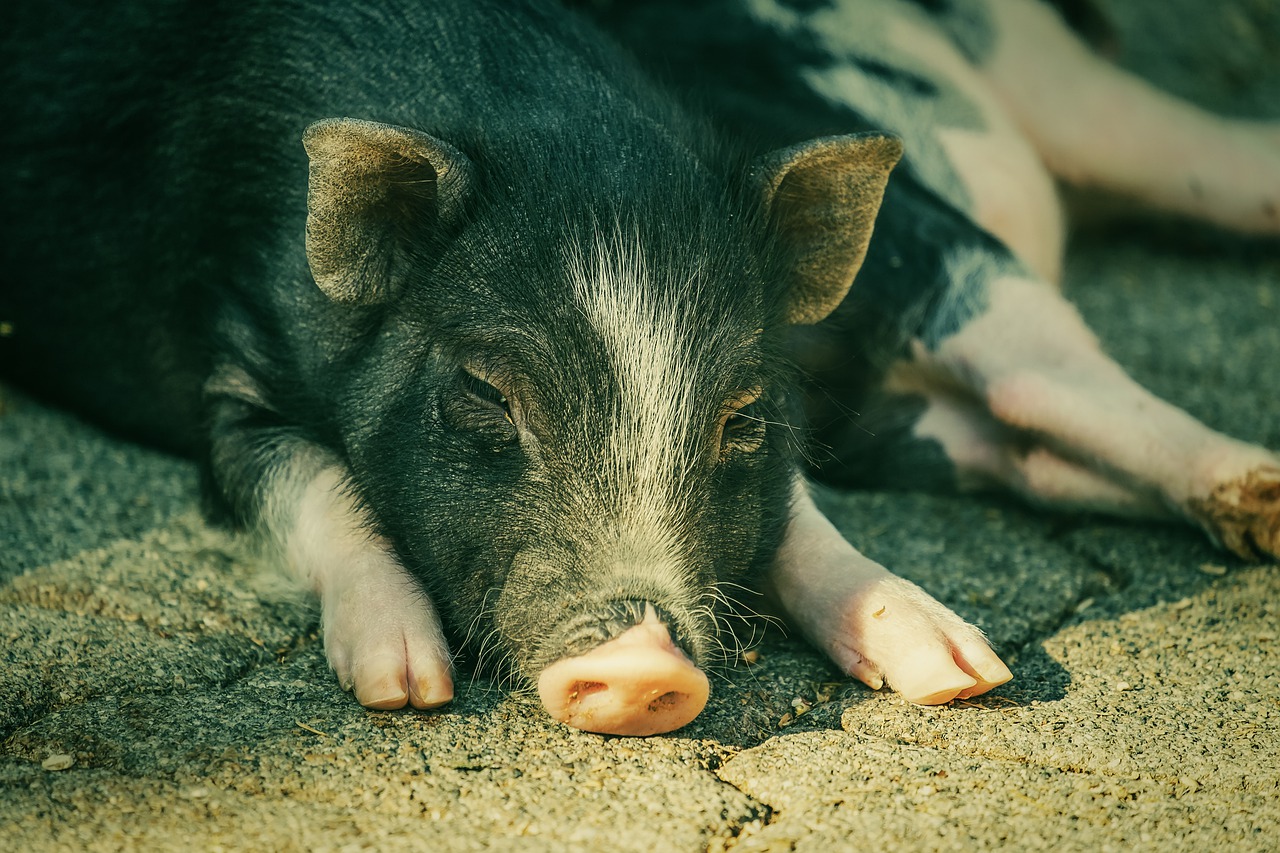 Animals like goats, cattle, deer, and other animals known as even-toed ungulates, have cloven hooves called trotters. If you are wondering whether pigs have hooves, this article is going to answer your question, so keep reading it until the end.

So, do pigs have hooves? Yes, pigs do have hooves. These hooves have two main toes, and the frontal toes are slightly pointy and cloven in the middle. These small appendages appear both on domesticated pigs and their wild ancestor, the boar.

A pig’s hooves are made of a material called keratin, which also makes up the parts of many other different animals, including human hair and fingernails. Having cloven hooves provides a pig with the balance on rough and uneven ground, but there are also many other uses a pig has for its distinctive hooves.

When searching for food, pigs are similar to dogs in that they will often use their powerful nose to root around in the dirt and sniff for items with a strong sense of smell. However, for a pig to discover a hidden treat underground, it’s not the nose, but the hooves that become its most important tool.

The pig often has to walk quite a distance when searching for food, whether on the farm or in the wild. Historically pigs were also used for truffle-hunting, an activity which required them to go for long periods in the forest to search for a valuable type of fungi for their human owners to sell.

The pig’s hooves come in handy, especially for soft, spongy terrain and long distances. Offering balance, length, and a lightweight yet tough and sturdy design, a pig can travel quickly on the ground, often not suitable for many other types of animals. This is especially true when it comes to muddy areas and swampland.

While human beings usually need a thick pair of waterproof rubber boots or an all-terrain vehicle to get through heavy mud, the pig has adapted to be able to get through mud quickly with the use of its two-toed cloven hooves. The hoof has evolved over time on pigs and boars to bear weight in the center, a trait that allows for easier maneuvering on soft ground.

Hooves offer convenience for a pig as well in terms of physical care. While many domesticated pet pigs require a hoof trim from their owner every now and again, most pigs continually wear down their hooves as they grow from simple regular activities, meaning less time needing to be spent on maintaining their feet.

Because both wild and domestic pigs frequently forage and wallow in mud, it is easy for them to wear down their hooves without causing much damage to their feet altogether.

This is particularly advantageous when it comes to needing time to look for food and water, which these animals can spend more time doing without needing to look after their hoof growth. Because a pig has relatively short, stubby legs, its hooves allow it to swiftly travel through thick brush and soft terrain due to their lightweight, keeping balance while still being able to stay very close to the ground where they like to forage.

The pig has evolved much like a domesticated beagle dog this way, with short but sturdy legs, small, fast feet, and a keen sense of smell when it comes to sniffing out food and objects.

A pig’s hooves are not only about food and foraging, though. When it comes to being a pig, there are a lot of predators to watch out for, and a pig can move incredibly quickly when in distress. Trotting forward on its hooves at a balanced angle so that it almost appears as if it is skipping instead of running, the pig can quickly dash back and forth, hide beneath large objects and move indoors when a predator comes by Using their nose and hooves, they can shove things aside in anger, as well as kick in self-defense.

While wild boars and warthogs often use their teeth and tusks as a defense instead, domesticated farm pigs and pet pigs have evolved to lose their wild tusks, and their best defense is to kick anything or anyone that tries to grab them.

Getting kicked by a pig definitely isn’t fun – in fact, it can cause serious injury depending on where a pig kicks a person or predator, especially to the head – but it gives the pig time to escape.

Although at first glance it may not seem like a pig’s hooves are all that special or important, they provide a pig with one of the essential tools in its life, serving many purposes beyond what might usually be expected. As pigs have become our companion animals and livestock, their hooves have become even more of a day-to-day necessity for all of their typical activities.

Do Pigs Hooves Need To Be Trimmed?

Pig’s hooves grow with time, and at one point in time, it can overgrow such that it makes it difficult for a pig to walk. Therefore, it is advised for pig owners to trim the hooves from time to time. For young pigs, it is suggested to use a file on their nails for trimming, whereas you can use clippers for adult pigs.

Hooves should be cleaned very carefully before trimming them. Also., it is advised to rub the belly of pigs while trimming the hooves as it helps them to relax. After cutting the dead nails with stainless spring, the cutter doesn’t forget to smooth them with a nail file.

As pig hooves are made up of keratin that is also present in nails, it doesn’t hurt pigs while their hooves are getting trimmed. But make sure you don’t over trim the hooves as it’ll then going to hurt pigs during walking.