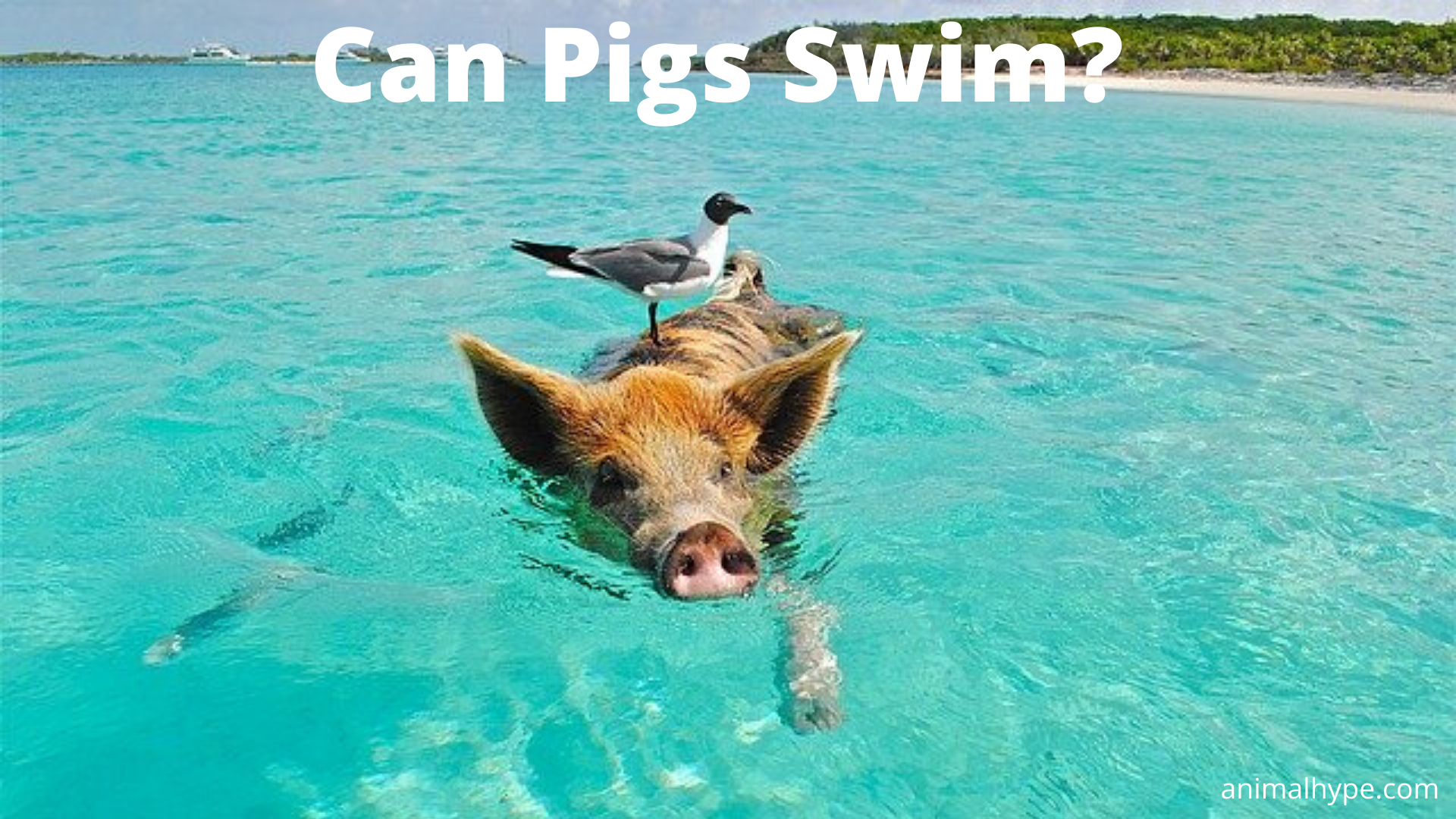 But have you ever spotted a pig taking a dip in clear water? If you have spotted one, have you ever thought whether they could swim or not?

We all have heard the urban myth that pigs are mammals that cannot swim. But is it true? Let’s find out.

So, can pigs swim? Yes, pigs are excellent swimmers. Irrespective of whether they are pets, domesticated or wild, they all swim well. It is rather interesting to note that pigs love clear water more than muddy waters that have earned them the reputation of being dirty.

Pigs are excellent swimmers that can be seen swimming across rivers and streams in search of better foraging & mating lands in its natural habitat. Like most other domesticated animals, pigs can naturally stay afloat, and all that they have to do is to doggy paddle to swim.

That being said, it is important to note that there would always be a stark contrast between a wild pig and a domesticated pig when it comes to swimming.

In this article, we will have a look at the pigs’ ability to swim and discuss some interesting facts about it.

Can pigs stay afloat in the water?

Yeah, pigs can stay afloat in water with ease. In fact, not just the pigs, all mammals excluding two are naturally buoyant. Mammals, in general, have a decent-sized lung and hence a considerable lung capacity. Owing to which they have an increased buoyancy.

Apart from this, mammals, in general, accumulate fat under their skin. If you didn’t know, fat isn’t as dense as water, which means that fatty mammals will have better buoyancy in water.

Pigs are naturally buoyant and don’t mean that they can stay afloat in the water while keeping still. They would still have to paddle with their limbs to balance themselves in water. 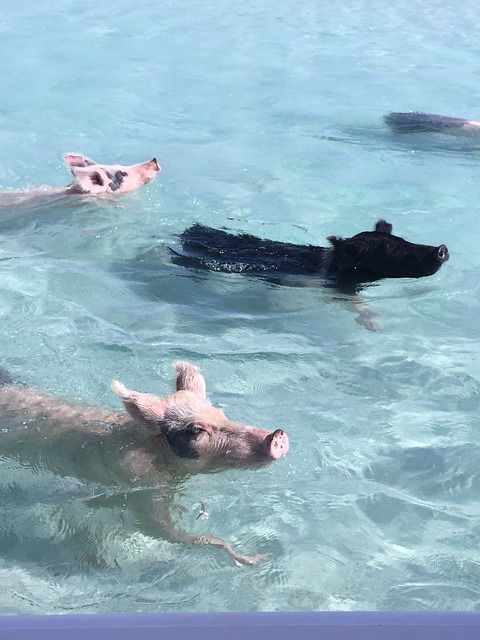 Pigs are excellent swimmers by birth. It is just that most pigs don’t realize it until they step into the water. The ability of pigs to swim right from birth can be traced back to their ancestors, who were living in the wild.

Living in the wild is a constant tussle which only the ablest one can survive. Swimming is one of the important skills that are needed for survival in the wild.

The wild pigs’ ancestors had to migrate over the years in search of better foraging grounds and habitats. Swimming being a skill needed to survive, somewhere down the evolutional lane, it became a part of their genetic code.

Can all pigs swim?

When it comes to the domesticated pigs, they are provided with everything necessary for their survival. This isn’t the case with the ones in the wild who have to migrate constantly for survival.

Due to these reasons, a pig living in its natural habitat would be better equipped and prepared to swim than the domesticated ones.

Swimming is a physically daunting task that needs good muscle strength and stamina. These are the traits pigs in the wild possess, making them better swimmers than the domesticated ones.

This means that you can’t expect the domesticated ones to swim a long distance. All they can do is paddle to safety if they accidentally fall into the water or maybe go for a casual swim to battle the scorching heat. 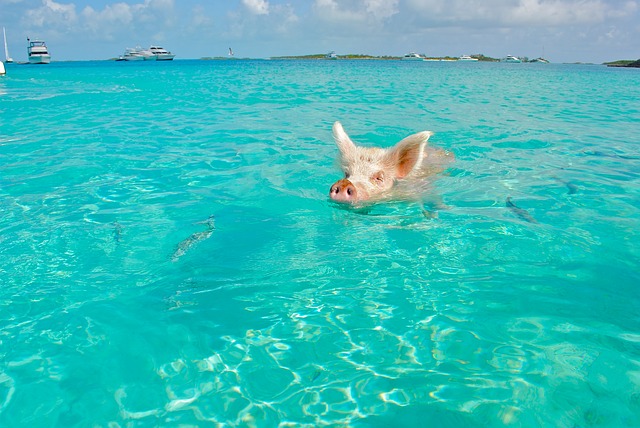 Sounds quite bizarre for a creature who spends most of its time wallowing in muddy waters, right? To better understand a pig’s affinity towards swimming, you should understand how important is it for them to spend time in the water.

Unlike humans, a pig cannot control its body temperature by sweating because they lack sufficient sweat glands. And most of the existing sweat glands might be blocked.

Instead of relying on the sweat glands, the pig keeps its body wet by wallowing in muddy water. By doing so, it coats its skin with mud that has better water-retaining capacity.

When the body temperature of the pig increases, the water in the mud absorbs it and evaporates, helping them maintain optimum body temperature. Though it may seem to us that pigs enter the muddy water to play in the dirt, they step into it for the water content in the mud.

This is why we say that pigs enjoy swimming. Going swimming would be the ideal getaway for them during a hot sunny day. It is important to note that pigs would still prefer to wallow in muddy waters because of the better water retention capacity of mud.

What are the water activities for a pet pig?

Now that you know pigs love swimming, you might be wondering what the water activities that you can treat your pet pig with are? Worry not for we have you covered here.

Don’t worry; we aren’t going to ask you to take your pig to a beach for a casual swim or a sunbath. Even a small pool of water like an inflatable kiddie pool would do the job.

Fill the kiddie pool with water and throw some tasty treats like apple slices on the water. Your pigs would have a happy time wallowing and eating these treats.

If you were to let your pig into the swimming pool, you could throw some toys on to the water for the pig to play with. Contrary to what most people believe, pigs are intelligent animals, and they love mental stimulation. Having toys in the water will be an incentive for your pet pig.

That being said, it is not advisable to let the pig swim in the swimming pool unless you plan on emptying the pool every time after the pig swims.

As said earlier, pigs are found to be carriers of many deadly diseases. There is a high chance of humans contracting these diseases through direct contact. Letting your pig swim in the pool increases the chances of direct contact.

Do pigs cut their throats when swimming?

No, the pigs don’t cut their throats while they swim. This is another urban legend about pigs that most people still believe. The origin of this myth can be traced back to a poem written by Samuel Taylor Coleridge, and it goes like

Down the river did glide, with wind and with the tide
A pig with vast celerity
And the Devil looked wise as he saw how the while
It cut its own throat

So that’s all it is, nothing more than a poet’s wild imagination!

Is it safe to swim with pigs in the Bahamas? 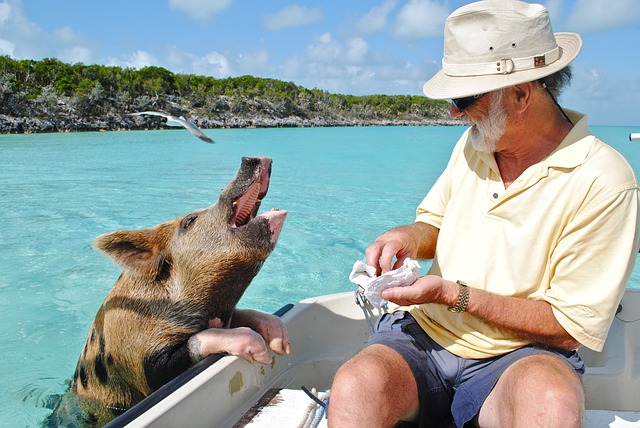 The swimming pigs of Bahamas have become quite an attraction for the tourists. Tourists from in and around the country flock to the location to swim with the seafaring swine. But most people don’t understand the risk involved in it.

In most of these tourists’ spots, it is the wild boars that swim with the tourists and not the domesticated and trained ones. Wild boars are known to be extremely aggressive and are capable of causing serious injuries with their tusks.

Though most tour agents promise the tourists that it is perfectly safe to swim the pigs, it really isn’t.

Apart from the risks of being attacked, the major threat lies in contracting zoonotic diseases from the pig. Pigs are found to be carriers of many deadly bacterial and viral infections that can potentially be life-threatening.

Most of these infections are spread to humans when they come in direct contact with the fecal matter of pigs.

Every time you swim with these wild pigs, you risk contracting deadly zoonotic diseases from them.

Do Pigs Have Hooves?