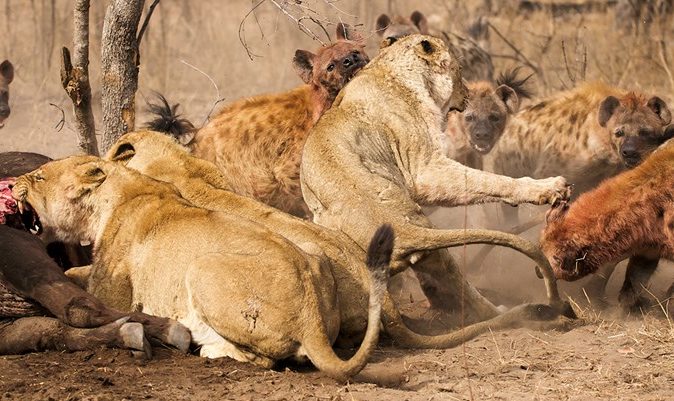 Lions and hyenas are portrayed as two fierce enemies engaged in a relentless battle over the African landscapes.

When it comes to the food chain in the wild both lions and hyenas are apex predators living in the same area, compete for the same food and sometimes even scavenge the same remains.

The reason why lions and hyenas end up fighting is that they eat the same food and both are competition to each other. If you have seen the Disney movie “the lion king” you might have seen Mufasa tearing the herd of hyenas apart.

But is that really the case? Do lions kill and eat hyenas?

Yes, it is true that lions eat hyenas but it isn’t a common thing. Lions end up killing hyenas to cut down the competition for food. Lions see hyenas and other apex predators as a threat to their territory and life which explains why lions kill them. It is important to note that lions don’t kill hyenas to eat them. In most cases, lions are seen to leave the hyenas to die rather than eating them. Some biologists believe that lions do not like the taste of hyena meat while some say it is because hyenas aren’t a nutritious diet for them.

Why do lions and hyenas fight?

Both Lions and hyenas are apex predators who live in the same region, compete for the same food. This competition for resources is found to fuel a relationship characterized by animosity.

It is a common behavior seen among animals especially in the case of apex predators. When lions and hyenas cross each other’s’ path they react with hostility. This doesn’t require any apparent reason.

Lions are extremely powerful and all that it takes in 2 male lions to fight a group of 20 hyenas. There have been many instances where male lions are found to take pleasure in harassing or killing hyenas. Sometimes lions are found to leave severely injured hyenas to die rather than killing them.

Looking back in time, it is interesting to note that this tussle with lions and hyenas’ dates back to more than 12,000 years.

Archaeologists who were excavating in central and western Europe have found lion bones in hyena dens. This clearly states that lions and hyenas could never get along well for ages.

Yeah, lions are sometimes found to eat hyenas. In fact, when in a mood, lions can sometimes eat an entire clan of hyenas without consideration.

That being said, it is important to understand that lions do not hunt down hyenas as prey. The reason for this is because hyenas are predators like the lions and hence are not a nutritious diet for them.

More than that, hunting down a deer or other prey is far easier than hunting a hyena.

Also most carnivorous animals are very selective when it comes to the taste of the food they eat.

Similarly, lions too are choosy when it comes to the food they eat.

In fact, a lion’s aversion to the taste of some meats has intrigued biologists. Most biologists believe that the reason for this taste aversion is because they are more susceptible to contracting parasites and diseases from other carnivorous.

This explains why lions kill hyenas to reduce the competition for territory and food and not for food. That being said, only the weak and old lions among the pride eat hyenas when the situation demands or only when they are starving.

Who usually wins in fights between lions & hyenas? 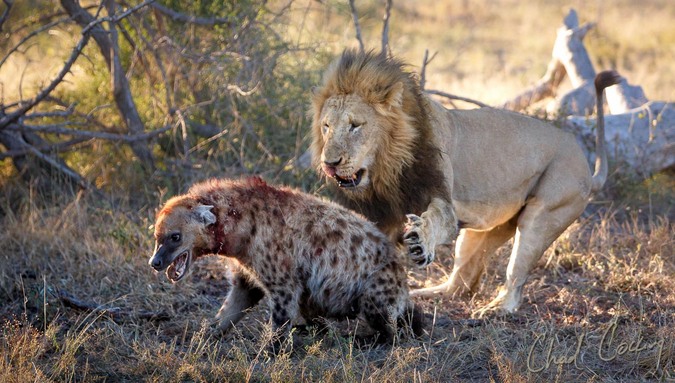 Considering the size and the mightiness it has to be lions, right? Though lions are much stronger than hyenas sometimes lions don’t stand a chance against hyenas.

Most of us have the impression that hyenas are cowardly scavengers as they are portrayed in stories and movies. Well, it isn’t true because hyenas are accomplished hunters, and 75% of their diet constitutes of the kills they themselves make.

When it comes to a fight, lions do have an upper hand considering their strength. On an average lion weigh 400 to 420 lbs and to put it in simple words, lions can crush the skull of a cow juts by a swipe of its paw. This makes lions mostly rely on their strength for hunting and fighting.

This is not the case with hyenas because they are more intelligent and they rely on teamwork when it comes to hunting down prey. Hyenas target its prey and they attack in groups by isolating its prey from its herd.

This teamwork is also seen when hyenas fight lions. Hyenas attack lions in a group of big numbers. Because they come in a group or 15 to 20 Hyenas are not intimidated by the size of the lions.

Lions and hyenas mostly fight for food. Hyenas do not attack a pride of lion rather they choose to attack the loner in the pride. Hyenas come with a group and slowly isolate the lion from their pride.

Once the lion is alone hyenas surround it and start attacking from all sides. Even though they are a group 15 to 20 it is not going to be easy to bring the lion down because a bite or a swing of its paw can be lethal. In fact, A group of 2 lions is more than enough to fight 20 hyenas.

So yeah, in a fight, lions always have an upper hand but that does not make hyenas any less lethal.

Is it true that lions steal hyenas’ food?

Yeah, lions do steal hyenas’ food. Finding it quite hard to believe right, especially an animal as mighty as the lion?

It is important to understand that in the wild as far as the apex predators are concerned, the lesser energy the dissipate the better it is. Imagine the case of a lion ambushing a wild buffalo, chasing it, and pounding on it to land a killer blow, this entire process isn’t easy. They dissipate a lot of energy to find a meal.

As discussed in the previous section, hyenas and lions share the same territory and they hunt the same prey. Considering the advantage lions have over hyena, it is easier for a lion to fight off a clan of hyenas to steal their food rather than hunting on its own. And it saves a lot of energy too.

Are lions and hyenas enemies?

No, lions and hyenas are not enemies as portrayed in most cartoons and movies. As discussed in the previous sections lions and hyenas live in the same territory, hunt the same prey, and hence are competition for each other.

When it comes to life in the wild lesser the competition, the better the chance of survival. As far as lions and hyenas are concerned they are a threat to their survival and they tend to fight with each other every time they cross each other’s path.

So yeah, as said lions and hyenas are not enemies rather they are simply following the theory of evolution; survival of the fittest!