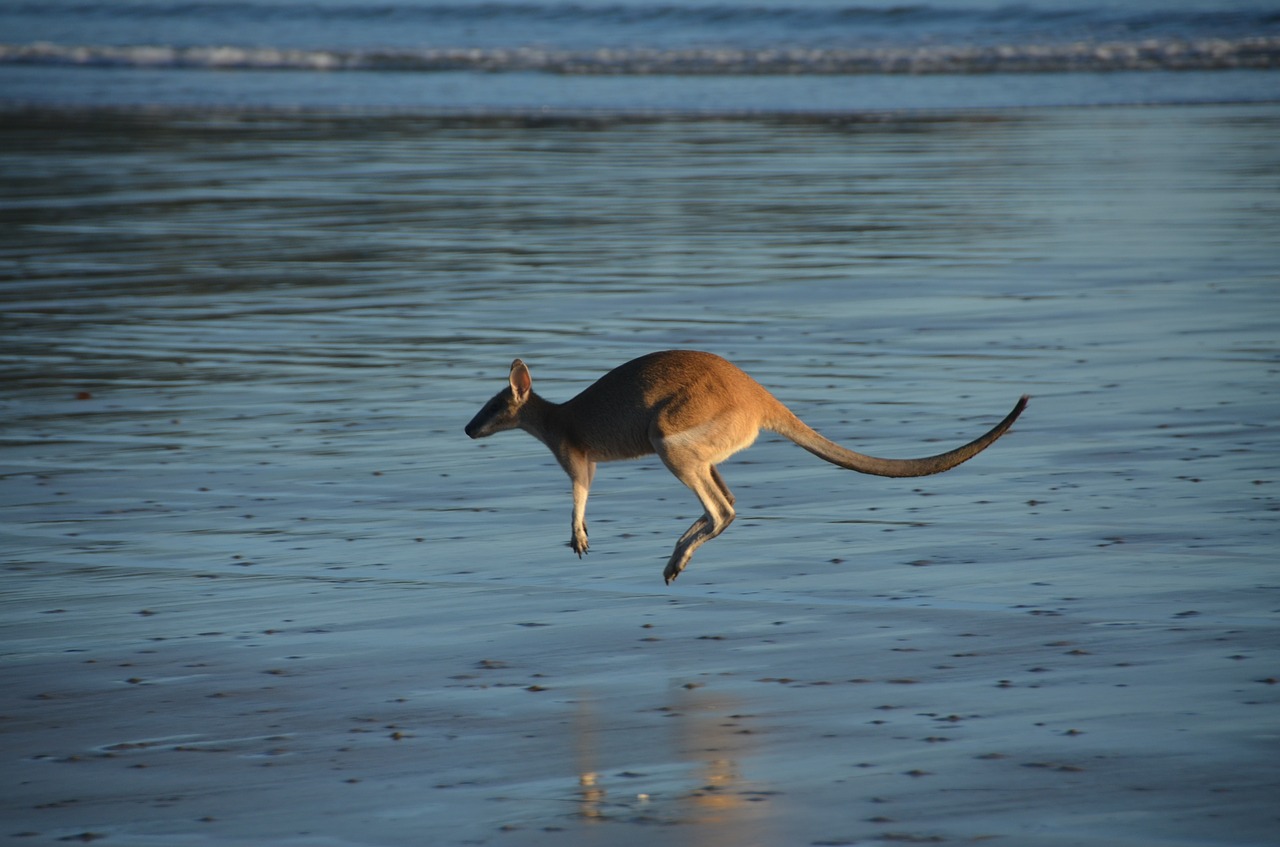 Last weekend, I was at Cape Hillsborough beach enjoying the hot sunny weather and a serene view of nature. I was shocked to see a couple of kangaroos near the shore trying to go into the water to get something. Well, it was very fascinating and made me wonder whether kangaroos can swim. I did some research myself and here is what I found.

So, can kangaroos swim? Yes, kangaroos can swim very nicely and at quite a fast speed. Kangaroos are often seen swimming in order to cross the rivers. They do dog paddle movements using powerful back legs which helps them to swim perfectly.

Most of the people on seeing tiny forelimbs generally assume that kangaroos are unable to swim. But contrary to that kangaroos turn out to be expert swimmers. I myself have seen a kangaroo swimming in water about 22 feet deep.

Even though the forelimbs are quite weak in comparison with rear legs, but still these greatly improve the balance of a kangaroo in water. The buoyancy felt by kangaroos is very high in water which results in a high pace swim action.

How do kangaroos swim?

Kangaroos belong to the Macropodidae family in which most of the members generally live in dry grasslands and plain land. Macropods, in general, are poor swimmers but a kangaroo makes itself an exception with mind-blowing swimming technique.

Kangaroos have developed this ability of swimming due to the adaptation over the years defending themselves from predators. If a kangaroo is chased by a predator, it prefers to go into the water where it is nearly impossible for them to get caught.

The ability of kangaroos to swim also had a great effect on migration. The kangaroos’ subspecies are found on isolated islands which is a very interesting subject of study.

Another fascinating thing about kangaroos is that their legs move independently in the water while swimming. If we observe a kangaroo on land then we can easily see that it is nearly impossible for it to move legs independently due to which they prefer to jump instead of walking.

But in water, legs are supported more by the buoyant force helping them to paddle their legs quickly. With those broad feet, they push a significant amount of water in each paddle and this helps them to swim with a great pace.

Why do kangaroos swim?

Kangaroos swim to defend themselves

An incident in 1966 reported that a couple of kangaroos chased by dogs. Frightened kangaroos entered into the river and swim 2 miles when they get out on another shore. A detailed study of long-distance swimming by kangaroos is not yet done but this incident shocked many people who underestimated these marsupials.

Even young kangaroos show instinctive swimming capabilities in the water. They don’t inhale water and keep their head straight above the surface to breathe. Then they smoothly swim with paddling.

Kangaroos swim to get rid of itches and wounds

Most of the kangaroos suffer from the attack of ticks, mosquitoes, and scratches and wounds from the claws of other wild animals. These all make their skin very itchy and more prone to skin infections.

Hence, it is also one of the reasons when kangaroos feel like taking a dip in water to take a bath and clean the body. It gives them pleasure and they thoroughly wash their wounds and scratches so to avoid any infection.

Can water fill into the pouch of a kangaroo?

This is another interesting question people ask knowing that a kangaroo can swim. Female kangaroos carry their babies in the pouch and if they swim there is a danger of baby kangaroo drowning.

This is the major reason why female kangaroos with young babies in their pouch avoid swimming. But there are some cases seen where female kangaroos with very young little babies swim in order to avoid getting hunt by the predators. When it came out of the water, the baby was not even wet.

Researchers explain that due to the presence of strong muscles in a kangaroo pouch seals it from getting water to enter. But this is only possible when the baby is younger than a certain age. If it goes over that age, the mother kangaroo won’t be able to seal the pouch completely and the baby can drown.

Therefore female kangaroos always won’t always have an option to go into the water if getting chased by dogs.

Can red kangaroos swim? Yes, red kangaroos are expert swimmers and can swim at an impressive speed. Like other types, Red kangaroos also don’t love entering into the water but can enter and swim when being chased by the predators.

Can sharks and crocodiles attack kangaroo in the water? Yes, many incidents have been reported where kangaroos took a dip in the river or lake and ended up getting eaten by the crocodiles. Once a kangaroo swimming in the sea was reported to get attacked by a shark.

Can Kangaroos Be Taught to Box?

How Are Kangaroos Born?