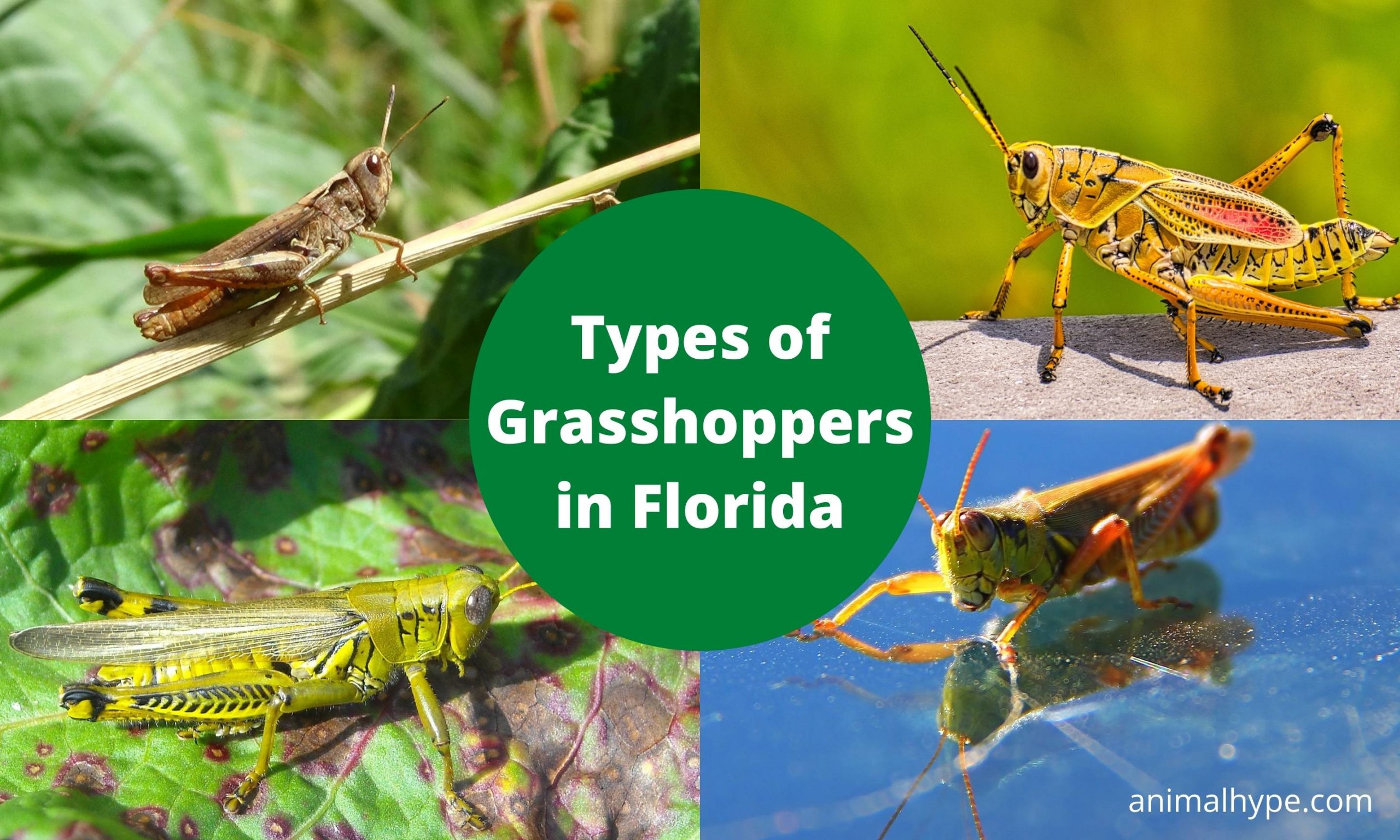 The state of Florida is well-known for its picturesque landscapes as well as its flora and fauna. While most of you might already know about the animals and birds commonly found in this state, how many of you have an idea about the types of grasshoppers that inhabit it?

It might come as a surprise to many that Florida is home to over 70 recognized species of Grasshoppers, out of which some are even endemic to the state.

In this article, we are going to talk about 18 species of grasshoppers that you can commonly spot in Florida: 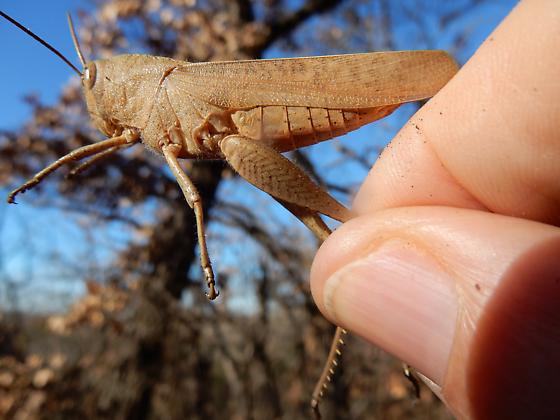 These grasshoppers have a reddish-brown body with a narrow brown line drawn along their head and pronotum.

They do not possess the prominent yellow dorsal stripe that is common to all the other members of their genus. That, along with their smaller size, is what sets them apart from the rest of the Bird Grasshoppers. 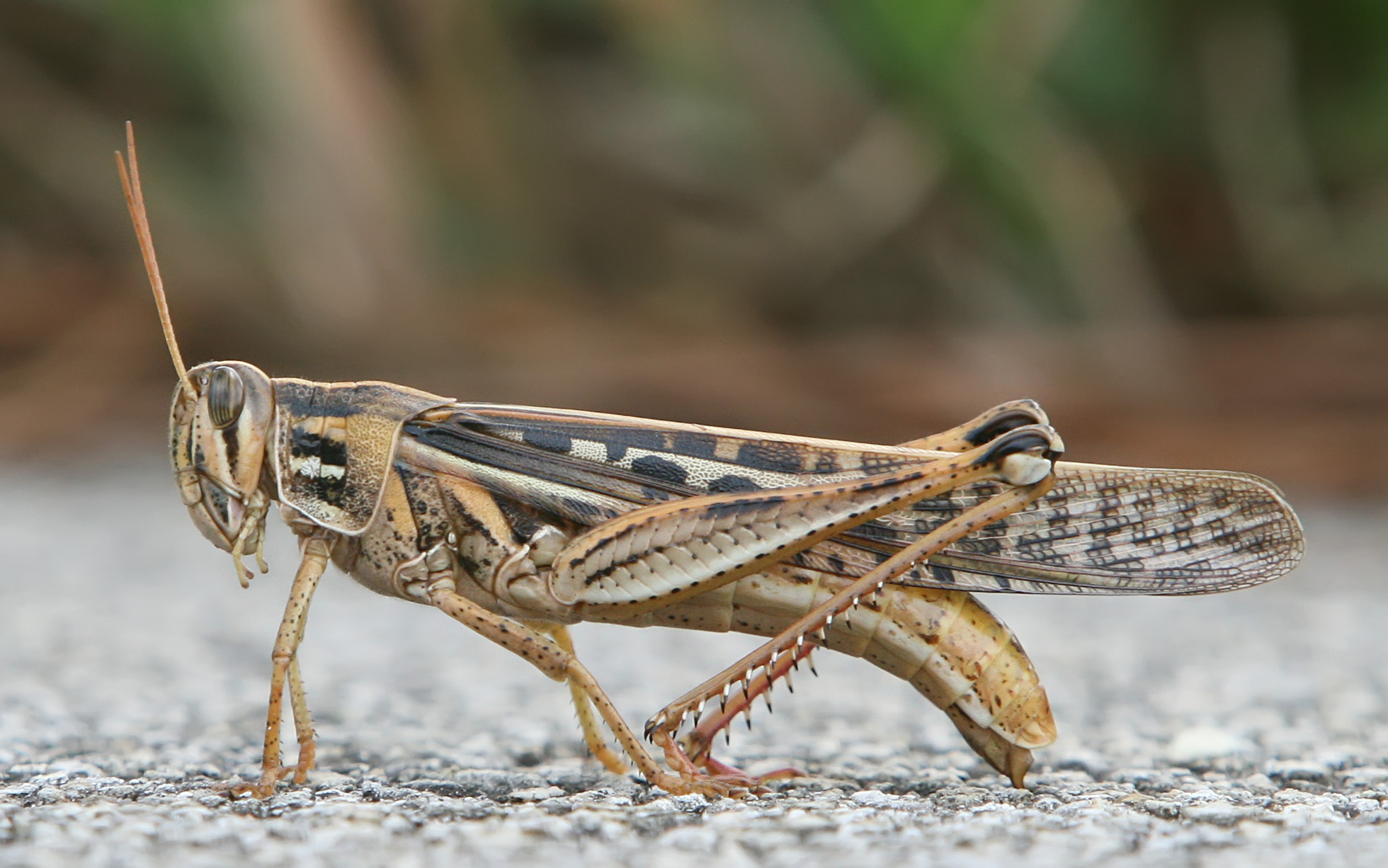 These grasshoppers have a large body and powerful wings. Although the adults display sexual dimorphism in their size, with the females being the larger ones, they share a similar appearance. Both sexes have a yellowish-brown body with pale wings that are covered with dark brown spots.

The nymphs appear very different from their parents and undergo a change in their coloration as they mature. 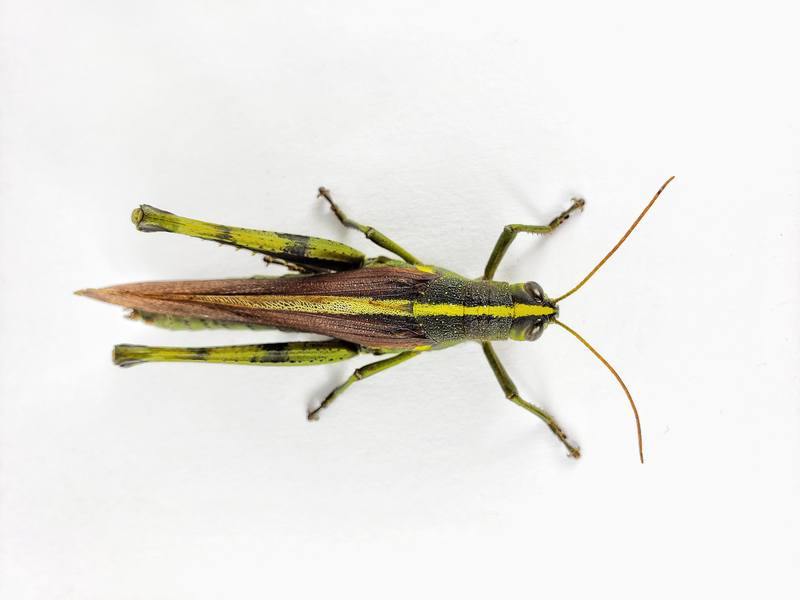 These grasshoppers have a green body with a pale-yellow dorsal stripe running along its length. Their forewings are olive-green in color. Occasionally, the dorsal stripe is absent in the females, that possess brownish spots on their forewings instead. Both sexes share the same coloration, with the males being slightly smaller in size.

Named after the Rosemary bushes where they like to hide, the Rosemary Grasshoppers are a species of nocturnal grasshoppers that are found only in Florida in the United States.

These grasshoppers have a slim body colored in mottled grey and brown with a greenish tint on their abdomen.

Along the length of their body runs a pale vertical stripe that seems more faded near their wings. Both sexes appear somewhat similar, except the females are slightly larger in size.

These grasshoppers’ body color can be highly variable, but the ones commonly spotted in Florida are usually golden or rusty brown in color, lending them their name. Other color variations are those that have an olive-brown body with a vertical yellow stripe running along its length. 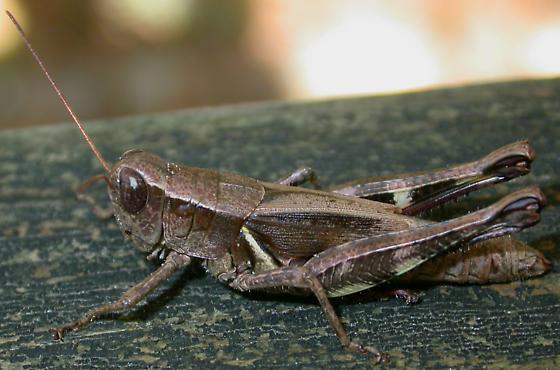 These Grasshoppers have a small but heavy body, with their forewings reaching an intermediate length. However, these wings do not serve any purpose since they are one of the flightless grasshoppers.

The color of their body is brown with either yellowish or greyish markings both on their forewings and upperparts. The stripe running between their eyes and pronotum is dark but often insignificant. Both sexes appear to be similar, with slight differences in their size. 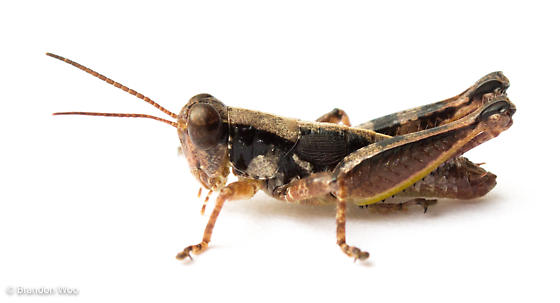 Found throughout the Florida peninsula, the Florida Least Spurthroat Grasshoppers are a species of spurthroat grasshoppers that are endemic to Florida. They primarily inhabit the wiregrass patches in open woodlands.

Florida Least Spurthroat Grasshoppers are the smallest members of their genus and possess short forewings. They have a reddish-brown body with their dorsal parts covered in a greyish or purplish hue and yellowish-brown undersides.

They are sexually dimorphic, with the males being smaller in size and having a shiny-black stripe behind their eyes, which is absent in the females. 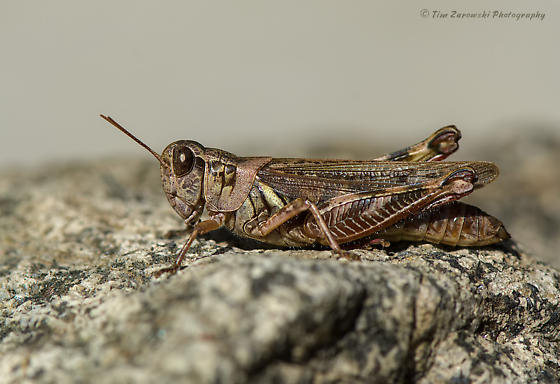 Found throughout North America, the Migratory Grasshoppers are a species of Spurthroat Grasshoppers that prefer to inhabit crop fields and weedy pastures.

In the western parts of the United States, these grasshoppers often acquire a high density and undergo a behavioral change. Like locusts, they begin to move in groups and travel vast distances, which lends them their name.

The Migratory Grasshoppers have a greyish brown body with a bold black stripe extending from their eyes to their pronotum. Their forewings are long and brownish in color and have a row of brown spots drawn on the center. There are few differences between both sexes aside from their size. 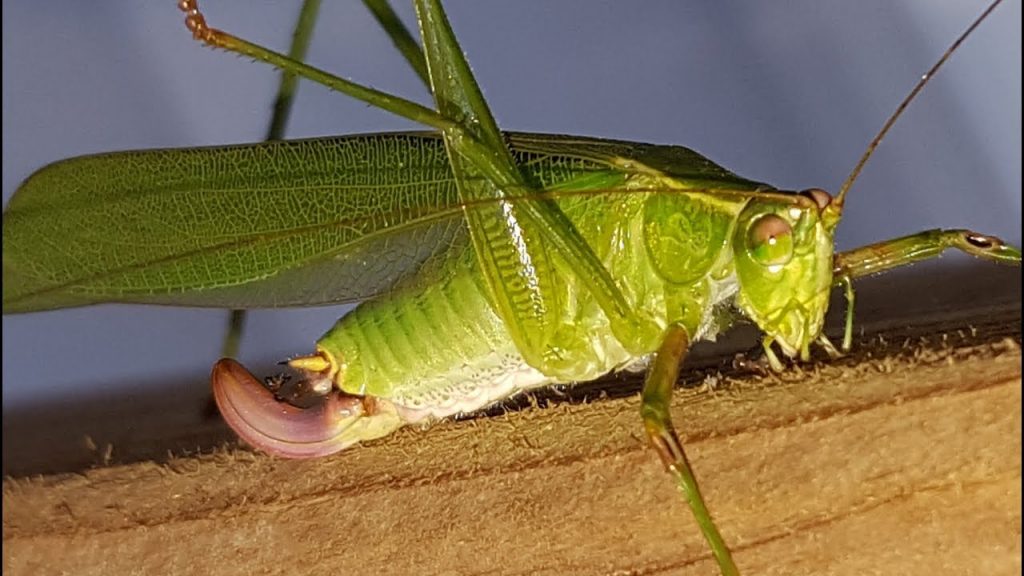 Often found inhabiting the dense shrubbery growing alongside swamps and streams, the Larger Fork-tailed Grasshoppers are a species of Spurthroat Grasshoppers that are also known as “Fork-tailed Locust”.

These grasshoppers have long wings and a brown body with an occasional reddish tint on their upperparts. Their wings are darker near their point of attachment to the body and grow lighter towards the end.

They are sexually dimorphic, with the males being smaller in size than their female counterparts. The males also lack the furcula that the females possess.

As their name suggests, the Longheaded Toothpick Grasshoppers are slender-bodied grasshoppers that have an elongated head. These grasshoppers inhabit pine Flatwoods, tall grasses, and pond margins and are found in most of the south-eastern states of the United States.

The Longheaded Toothpick Grasshoppers have a brown body with an occasional greyish tint to it. Unlike their body, their legs and forewings are often partly green in color. This unique coloration allows them to camouflage themselves in grasses as well as pine needles.

These grasshoppers are flightless but possess short forewings. Their face is remarkably slanted, with two sword-like antennae attached to the head. Both sexes look alike except for minor differences in their size. 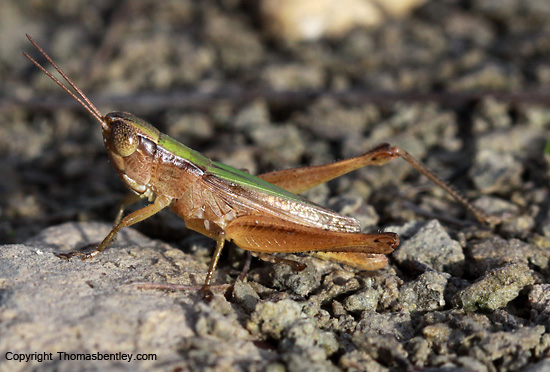 Found in moist habitats such as salt marshes and swamps, the Elegant Grasshoppers are a species of Slant-faced Grasshoppers. These grasshoppers are commonly seen in the southern as well as eastern parts of the United States.

Although they have a somewhat attractive appearance, the Elegant Grasshoppers do not really live up to their common name. They have a grass-green or brown body with a slanted face coupled with a large, rounded head.

Two dark stripes run between their eyes and forewings, which can vary greatly in length. The males are much smaller than their female counterparts and have a slenderer body. 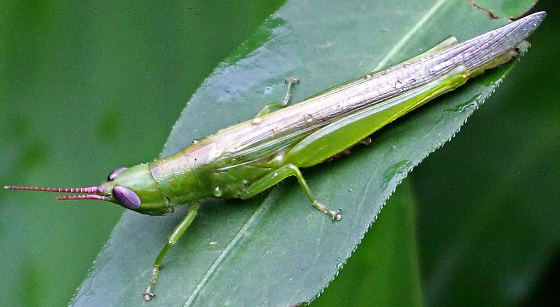 These grasshoppers have a slender and elongated body with a pointed head and a pair of sword-like antennae. In appearance, they might resemble the gomphocerines, but the location of their spine sets them apart.

They have a green or brownish-green body with either a dark or a pale dorsal stripe. Both sexes are similar in appearance; only the females are slightly larger. 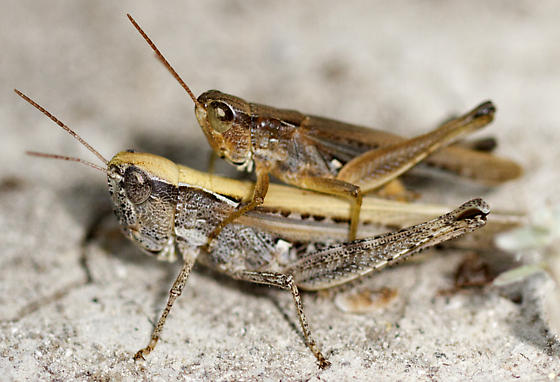 These grasshoppers can have a highly varied appearance. The ones that are more commonly spotted in Florida have a brown or green body with black triangular marks drawn over their pronotum’s posterior margin.

In the center of their forewings, you can find a series of small, rectangular spots which lends them their name. Both sexes are more or less similar in appearance, with the females being slightly larger in height. 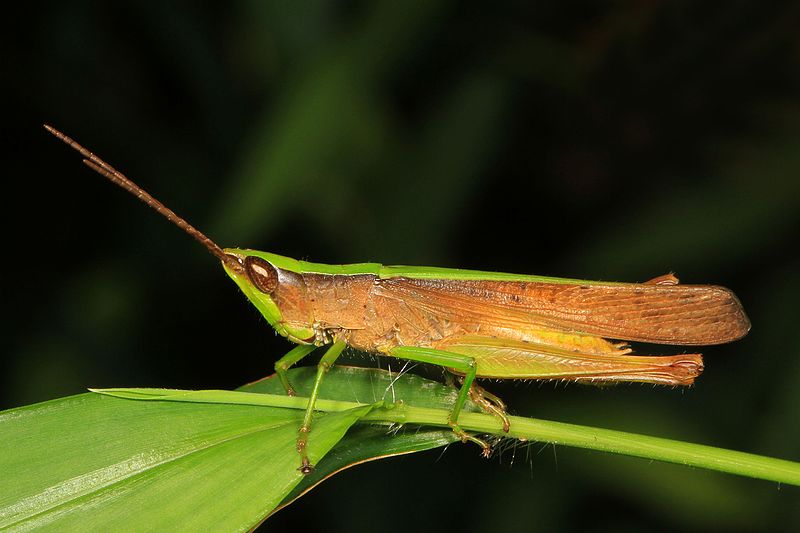 The Clipped-wing Grasshoppers are the only species of silent Slant-faced Grasshoppers that are endemic to the United States. They are usually found inhabiting tall grasses alongside water bodies such as rivers and ponds.

These grasshoppers are sexually dimorphic, with the females being larger than their male counterparts. They can either be green or brown in color, while the males always have a brown upper body with green laterals. Their antennae are typically shaped like a sword and are rusty brown in color.

Clipped-wing Grasshoppers can be distinguished from the other long-winged grasshoppers of Florida by their angled tip forewings. 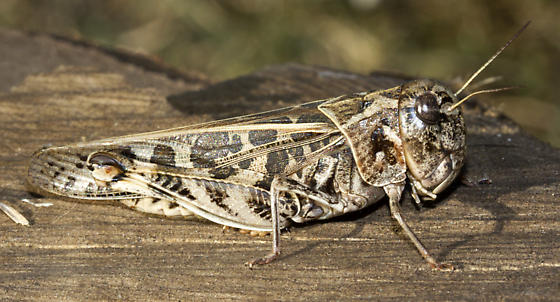 Although these Grasshoppers are powerful fliers, they are often referred to as “Clumsy Grasshoppers” because of the clumsy movements of the egg-laden adult females.

The Wrinkled Grasshoppers have a large, robust body with an unusually large head and a vertical brownish-yellow face. The rest of their body is either grey or brown. The pronotum of these grasshoppers has a coarse or wrinkled appearance, which lends them their name.

You can notice two prominent yellow spots on the sides of their pronotum with an X-shaped marking on the top, which is more commonly seen in males. Their wings are translucent with a dark coloring along the veins. The females are larger in size than males. 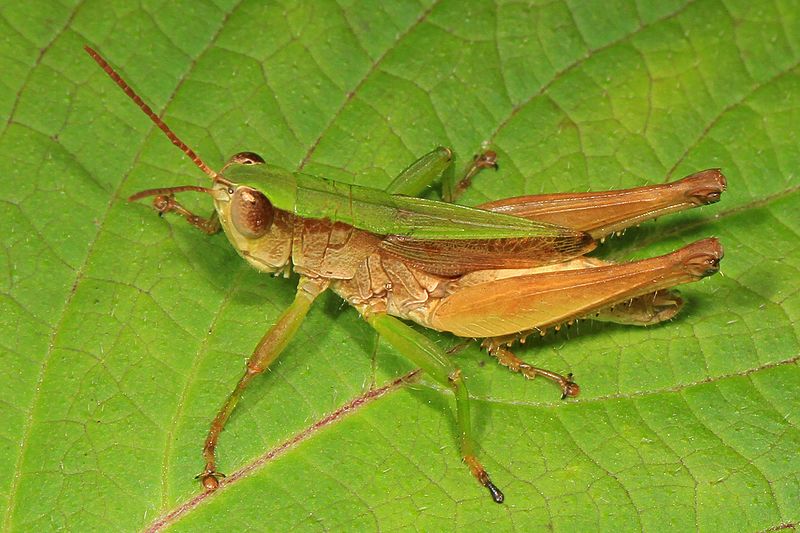 These grasshoppers inhabit a wide range of habitats and are found in knee-high grasses, roadsides, fields, pastures, lakesides, pond sides, and wooded areas.

These grasshoppers display sexual dimorphism, with the females being larger in size than the males. The females have a more uniform coloration than their male counterparts and are either brown or green in color.

Found all over Central and North America, the Green-striped Grasshoppers, are a species of Grasshoppers that tend to inhabit moist areas, such as hay meadows, pastures, roadsides, etc.

Green-striped Grasshoppers display a strong sexual dimorphism both in their size and coloration. The females are larger in size and have a mostly green body. In comparison, the bodies of the males are smaller and brown in color.

While the females have a long and thick abdomen, the males have thicker legs and a larger head. Both sexes have yellowish wings, brown antennae, and a profound green or brown stripe near their front wings. The nymphs adopt the coloration of their mothers.

They are mostly found in woodlands, wasteland, and crop fields. Although these grasshoppers are flightless, they have small, non-functioning wings that are more like a decorative organ.

You can never mistake South-eastern Grasshoppers because they are considerably larger than all the other locusts and grasshoppers that inhabit Florida. As if their gigantic size wasn’t enough, these grasshoppers’ body color also makes them extraordinary among the other members of their family.

The adults can have various colorations: an orange body covered in black markings, a black body with yellow or reddish stripes, or a black-spotted yellow body. On the contrary, all the nymphs have a black body spotted with bright colors.

Types of Grasshoppers in Florida (to sum up)

Contrary to their name, all the grasshopper species have wings, and more than half of them can fly. Most of their species are diurnal in nature and be found hopping or flying around during the day.

Compared to their close relatives, the locusts, these little insects have a moderate diet and rarely cause a problem for our farmers.

Traditionally, they are believed to be the symbol of good fortune and prosperity in most parts of the world and are even kept as pets by the Chinese!

If you go through our article carefully, you will notice that it is very easy to identify them and distinguish between the different species commonly found flying around the state.