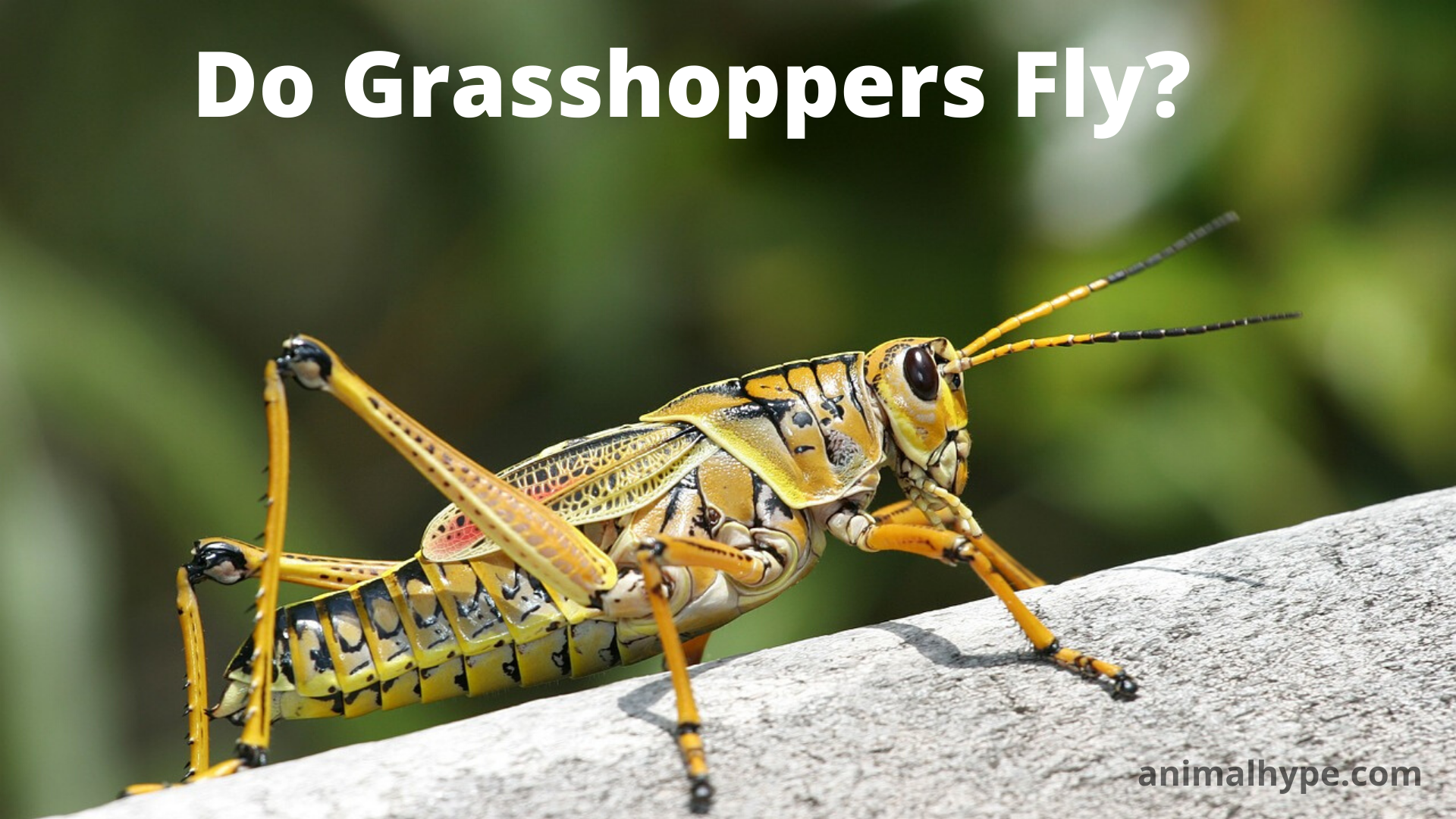 Grasshoppers have properties that go far beyond their call of duty. For instance, it is quite easy to believe that these insects will go just by their name, and their locomotive trait will only be to hop. But is it really the case? Let’s check whether or not grasshoppers can fly.

So, do grasshoppers fly? Yes, grasshoppers can also fly, besides hopping and walking. Their flight might not be of long term and prominent wings, but they do take flight when the situation demands. This also substantiates the fact that they migrate in swarms. They have strong wings, which helps them to fly in search of food or mate.

Some insects have shown surprising traits that have left entomologists in a rut and confusion. Grasshoppers in their many variations can fly, swim, walk, and hop. 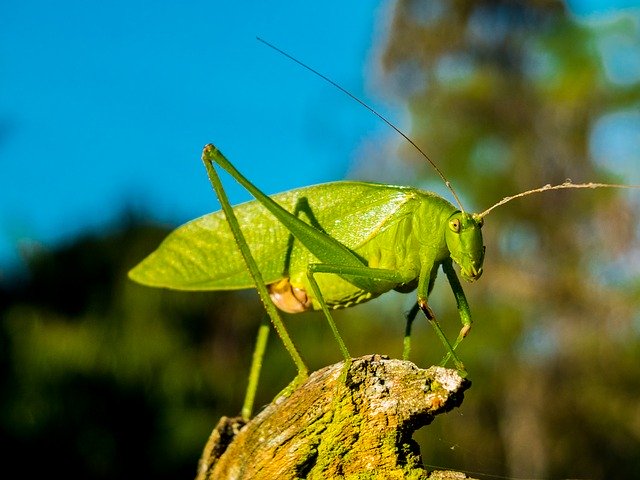 1. Grasshoppers are herbivorous insects that can fly at a high altitude of 280m or 920 feet.

2. Locusts, which are also known as flying grasshoppers, can go up to 1000m or above when the updraft is favorable.

3. They showcase a remarkable speed of 100kms per day while covering an area of 10-250 km square.

4. It can leap up to a range of 20 times its own body, that is to say, if they were to participate in Olympics, we know whom should we place our bets on.

5. Jumping or hopping of Grasshoppers are mainly supported by their legs. So stronger the limbs, higher the jump!

6. In their migration season, they can take a single jump covering the entire football field.

7. Grasshoppers who fly in swarms are known as Locusts.

Many people have a misleading notion that Grasshoppers can only jump and not fly, but that is not the case. When push comes to shove, these insects can fly with their strong wings to escape predators and in search of food.

They are avid fliers in the insect category. So there is no need to get nervous, the next time you see a flying grasshopper.

Belonging to the order Orthoptera, the little insects have an interesting build. Their exoskeleton is designed in a manner of armor and motion.

They have their forewings right at the back, i.e., in an anterior position.

Sometimes the wings can vary in number according to the species, but typically it’s two. The next are gena, frons, clypeus, labrum, palp, which are all situated on the upper side of the body.

Egg, nymph, and adult are the three stages of development of the grasshopper.

First, a female grasshopper lay eggs during the autumn season around the end of September till October. These eggs hatch in the spring.

Nymphs, which resemble small grasshoppers, come out, and their wings are yet to form. Shedding their skin five or six times these nymphs mature into fully grown Grasshoppers.

The process is quite similar to that of crickets or flying ants. It inhales a lot of air so that their cuticle tears open, and when all the cuticle falls off, they grow wings onto their back.

Grasshoppers belong to the phylum Arthropoda and class Insecta. Class Insecta consists of all the insects found all over the world. Their legs are six-jointed, which enables them to employ the ‘catapult’ mechanism. Kind of like frogs.

To jump, grasshoppers have to first flex their legs and then use the flexor muscle as a springboard to jump. Then it relaxes its muscles and releases the stored energy. This pushes the grasshopper back up into the air.

Types of Grasshoppers and their Wings

These grasshoppers are 1.3cm to 2.55cm when they are fully grown and are Green and pale in color. Their wings are distinctive than the meadow grasshoppers, which are of the same appearance. Along the margins of the wings, Marsh hoppers have white streaks. The wings also have a protrusion at their body juncture. The wings are sturdy and powerful.

Found mostly in the UK, Asia, and North America, these grasshoppers are long season grasshoppers. Their nymphs hatch early in March and mature into adults by July. Brown in color, they have textured or mottled wings. They often swarm due to their flying potency and strong wings. Surviving on grass, they are found in dry and arid areas and survives till December.

The most common type of species found in Asia and Europe. They are inhabitants of wet and swampy areas. They feed on long grass, and their green body helps in camouflaging from predators. Most of these grasshoppers’ wings’ are actually useless as they do not support their body in aerial movement. They hatch their eggs in spring and survive till winter.

They feed on long grasses and are found in shrubs and trees. They do have wings that are long, brown, and carved. Solitary species, unlike most of its brethren.

Green body with brown markings on them, these grasshoppers have brown or yellow eyes. Their wings are smaller than their bodies but fully functional, and they can fly quite fast. They live in wet areas and are 0.8 inches long. Common green grasshoppers can withstand extreme conditions too.

Quite infamous for their crop-destroying swarms, these are the most commonly found locust in Asia, Africa, and the Middle East. The most massive crowd recorded is of 40 billion, and their wings are sturdy and powerful to sustain flights over hundreds of kilometers. They feed on stems, crops, flowers, leaves, and even tree bark. In 2020. India faced one of the most vicious attacks of locust swarms.

Natives to the southeast US, these are also known as Florida Lubber, the Graveyard Grasshopper, the Black Diablo, or the Devil’s Horse. They are large in size and has a colorful body. Wings are small in size, nearly half the size of the body. However, the wings are not operative, and they cannot fly.

Found in Mexico and some parts of the US and are quite large compared to the rest of the variants. They hunt for wood in broad daylight. Although they are commonly known to travel in solitude, swarming isn’t unheard of these desert locusts. Despite the presence of wings, they cannot fly because their body weight is more than their wings can support.

Pygmy Grasshoppers, or Pygmy Devils, lives near riverbanks and wet marshes. Probably, the smallest of all the species, these are green, gray or brown in color. Given that their wings are way larger than their body, they are quite the fliers. They take a long period to be hatched and grown. The mating period usually begins in August, and youngs take birth in the following summer.

Interesting facts on the Flying Grasshoppers 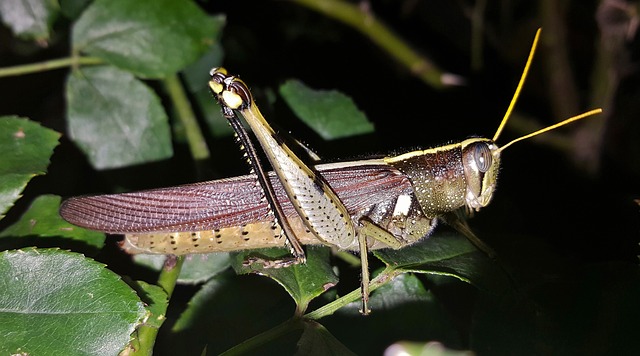 Ears of the grasshoppers are located in the posterior region of the body. In most cases, their abdomen, which is placed right below the wings is where the ears are. Eardrums or ears are called as ‘Tympana.’ These help them in tracking other grasshoppers and dangers.

Most grasshoppers are quotidian, which means they are active in the day and docile at night. Sunlight is their source of energy for daily activities. Perhaps, this is the reason why pesticides are sprinkled on locust swarms at night.

Songs of grasshoppers range from melodic to downright eerie. They can detect slightest bass alterations with their tympanas. Different grasshoppers emit different sounds or distinctive rhythms. Male and female grasshoppers have separate songs. Females attract mates through their songs while the males are known to be entirely out of tune.

Migration in grasshoppers are quite common, and those whose wings can function takes part in the traveling. And they move in a group of millions and billions. Bible wasn’t that far off to call them ominous as when these swarms pass over a region, they cover the sunlight and render the place into momentary darkness.

The defense mechanism of the grasshoppers called ‘spit brown juice,’ which are toxic in nature. These brown colored liquid, quite akin to tobacco juice, is one of a kind as they not only protect but also kills certain predators.

However, it’s not all bad with grasshoppers as they feed on toxic plants and weed out these from the good cultivation.

A fun fact is, the brighter the body, the more toxic the insect. They harness these toxins as a shield against predators. Grasshoppers can feature in Jurassic park movies, yes they are that old. The first fossil dates back to the Carboniferous Period, which is 300 million years from the present. Some grasshoppers are edible and also make for great chutneys!