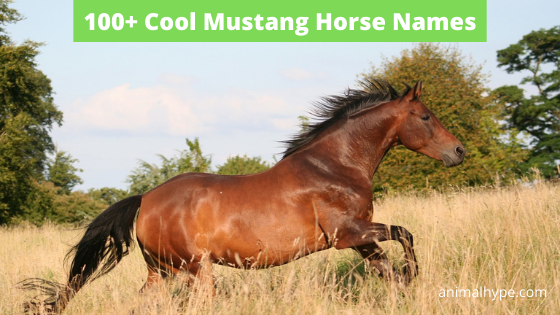 Mustangs are wild horses who roam the grasslands of the American West. They are of Spanish descent. Mustangs were brought to America by Spanish colonizers in the 16th century. They are known for their strength and endurance. These lovely animals are popularly known as “mesteno” or “mustango” in Spanish.

Mustangs are usually called wild horses because they are free-roaming animals. They come in many colors, from brown to chestnut, with spots, patches, or stripes. Cowboys in the West who caught, tamed, and sold Mustang horses were called “mustang runners”.

If you love horses and have got a gorgeous Mustang of your own, naming it may be a tricky thing. Well, leave your worries at the door. We have an exclusive list of Mustang names for you to help you pick only the best for your beast! 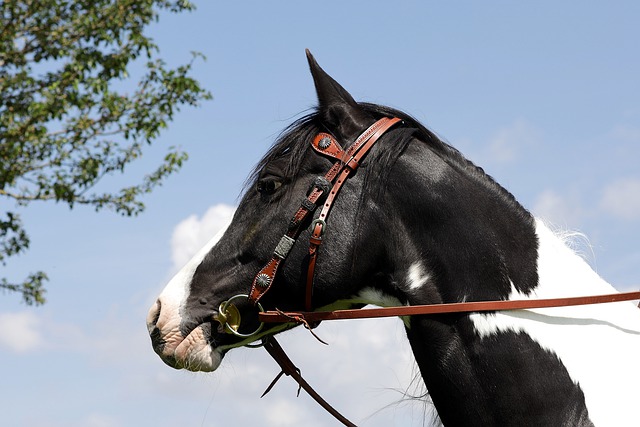 Wild Horse — Mustangs are free-roaming beasts of the wild West. Why not give your horse a name that aptly sums up its spirit?

Sweetheart — The best pet name for a beautiful mare.

Beau — It means “handsome” or “pretty” in French.

Dazzling Desire — Perfect for a gorgeous wild horse like the Mustang.

Whirlwind — Does your horse run faster than the wind? Then why not call it the Whirlwind?

Tumbleweed — Let’s hope your horse does not tumble like a tumbleweed!

Dynamite — Mustangs are tough creatures with strong legs and hooves.

Wild Beauty — Mustangs are wild horses with beautiful almond eyes that may be brown, blue, grey, or green.

Wild Ryder — One that complements the free spirit of your beast!

Lightning — If your horse can ride like lightning, maybe that’s what you should call it.

Borak — An Arabic word which means “the lightning”.

Jewel Pony — For the jewel of your stables.

Freedom — What can be a better name for a free spirit like the Mustang?

Monarch — The king of your stables.

Atlas — That’s a name that stands for strength and endurance. In the Greek myth, Atlas carried the weight of the world. It’s the best match for a strong and sturdy Mustang! 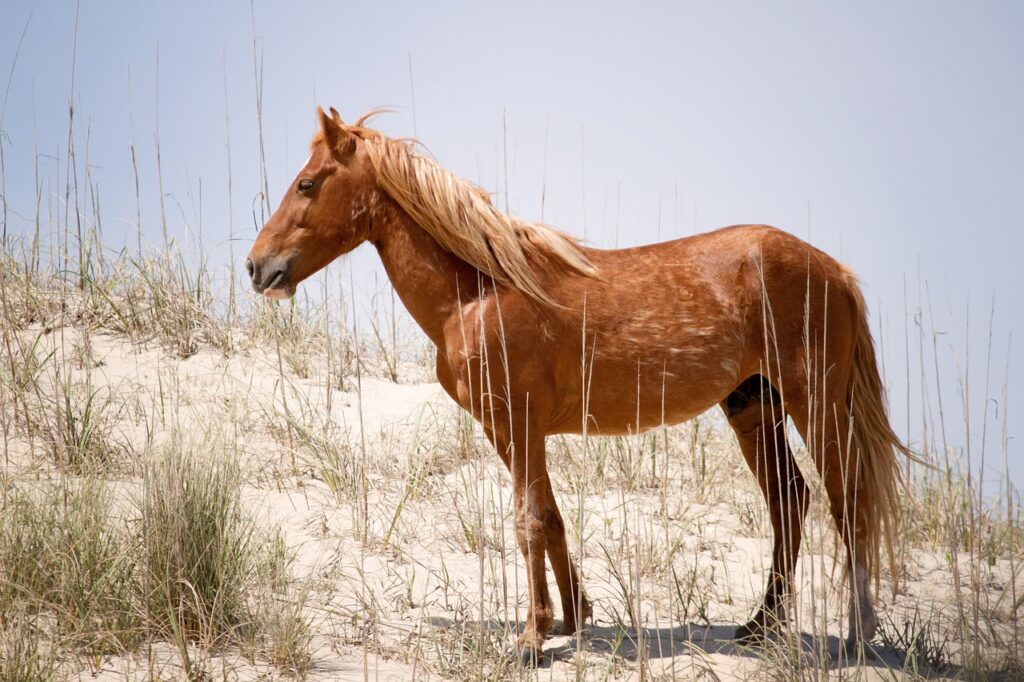 Hidalgo — The film Hidalgo retells the legendary story of the American distance rider Frank Hopkins and his Mustang Hidalgo.

El Diablo — A wild racehorse who stars in 1932 the film The Devil Horse.

Gunpowder — The temperamental horse from The Legend of Sleepy Hollow.

Shadowfax — Remember the ethereal white horse from Lord of the Rings? He’s the lord of all the horses and runs faster than the wind. If you’re a Tolkien fan, go ahead and name your horse after the exotic Shadowfax!

Philip — He’s a talking horse who is ridden by Edmund in the classic movie The Chronicles of Narnia. If your horse can talk in neighs and whinnies, why not call him Philip?

Pie — The horse from the 1944 film National Velvet.

Tornado — He’s a fast and strong horse who is ridden by Zorro in The Mask of Zorro and other films.

Cisco — The horse from the movie Dance with Wolves.

Seabiscuit — That’s a film based on a true story. Seabiscuit was an undersized racehorse who inspired many with his unexpected success on the tracks.

Spirit — The horse from the animated movie The Stallion of Cimarron.

Pilgrim and Gulliver — The horses from the movie The Horse Whisperer. It’s a beautiful film about the bond between a horse and their owner.

Thunderhead — A colt from the film Thunderhead, Son of Flicka.

Dollar — The horse from the John Wayne movie The Shootist.

Checkers — The pony from the film Moondance Alexander.

Duke — From the John Wayne movie Ride Him Cowboy. He rescues and trains a wild horse named Duke, who is being falsely framed for murder!

Gypsy — The horse from the film Gypsy Colt. 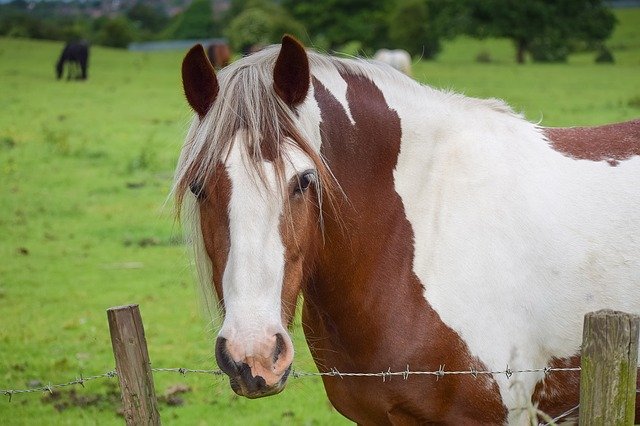 Bolt — A punny name for a horse who is eager to break into a gallop!

Thunder — For the Mustang who’s a tough guy!

Black-Jack — That’s also the name of a famous black gelding who once served in the United States military service.

Mosaic — The perfect name for a Mustang’s coat!

Amigo — A horse can be a man’s best friend!

Merry Legs — For the swift-footed Mustang!

Achilles — A gorgeous thoroughbred who features in The Hunchback of Notre Dame.

Destiny — The gorgeous noble white horse from Enchanted. Prince Edward rides Destiny and sweeps Giselle off her feet in this adorable Disney film!

Maximus — He is Rapunzel’s horse in the Disney movie Tangled.

Pegasus — The loyal companion to Hercules.

Angus — He’s a faithful Shire horse who is Merida’s companion in the Disney film Brave.

Buck and Patrick — Two stallions from the animated Disney film Home on the Range. While Buck loves to daydream, Patrick is a serious fellow!

Phillipe — He’s a Belgian Draft horse from Beauty and the Beast. He is a courageous fellow and a most loyal companion to Belle.

Frou Frou — A kind and beautiful horse from The Aristocats.

Jaq and Gus — The beautiful white horses who drive Cinderella’s carriage. They are actually her pet mice who transform into horses to take Cinderella to the ball.

Khan — The dark horse who is Mulan’s trusted companion in the Disney movie Mulan.

Bullseye — All the Toy Story fans must be already familiar with Bullseye, the loyal and goofy stuffed horse.

Buttercup — The adorable unicorn from Toy Story 3 who has a plush white coat, pink nostrils, and a golden horn.

Captain — The grey horse from 101 Dalmations.

Cyril Proudbotton — A Disney horse from The Adventures of Ichabod and Mr. Toad.

Liberty — A compliment to the wild spirit of a Mustang horse!

Bonita — A lovely Spanish name that translates to “pretty”.

Silver Lining — For the silver lining of your life!

Rosie — A lovely name for a chestnut mare.

Snowflake — For the unique horse in the whole wide world.

Daisy — For the horse with long legs!

Arabella — It has a Latin origin and means an “answered prayer”.

Apple-oosa — Appaloosa is a horse breed with a distinctive spotted coat.

Wild Honey — The perfect name for a wild Mustang mare.

Queen — For the queen of wild horses.

Lola — Although it means “sorrows”, Lola is a lovely name for any pet!

Merry — For the upbeat horse in your stables!

Stormy — For all the wild ones!

Mr. Darcy — For the Pride and Prejudice fans!

Chief — What do you call a Mustang, who is his own boss?

Jose — A name of Spanish origin.

Santiago — An old city in Spain.

Alejandro — It means “Defender of mankind” in Spanish.

Black Beauty — The horse from the novel of the same name by Anna Seawell.

Amalthea — The ethereal white unicorn from the animated film The Last Unicorn.

Calypso — A nymph who lives on a mythical island of Ogygia in Greek mythology.

Caspian — After the beautiful Caspian sea. Prince Caspian is also a character in The Chronicles of Narnia films.

Duchess — If you have a royal Mustang on your hands!

Goliath — A suitable name for a wild American Mustang.

Zeus — The king of all gods in ancient Greek mythology.

Apollo — One of the most powerful gods in Greek mythology. Apollo is the god of prophecy, music, arts, archery as well as knowledge!

Hera — The all-powerful queen of the gods in Greek mythology.

Caleb — Joshua and Caleb were the only two members from the group of Israelites who entered the Promised Land.

Some Interesting Facts About Mustang Horses

Mustangs are an interesting breed of horses, commonly known as wild horses or feral horses. They are found in a variety of colors and patterns. Here are some interesting facts about these small but sturdy creatures:

Mustangs get their name from the Spanish word mustengo. It means “ownerless beast” or “stray horse”.

Mustangs were brought over to North America by Spanish conquistadors in the 16th century.

Mustangs can be found in a variety of colors. They may be brown, chestnut, black, and even palomino. Some also have striking coat patterns, spots, or patches.

Most Mustangs have brown eyes. But some may also have beautiful blue, grey, or green eyes.

They usually measure up to 15 hands and weigh 900 pounds at best.

These classic wild horses are known for their endurance. They get their sturdy legs and hooves from roaming the harsh and rocky terrain of the American West for over 300 years.

Cowboys who would catch, tame, and sell wild Mustangs in the West were known as “Mustang runners”.