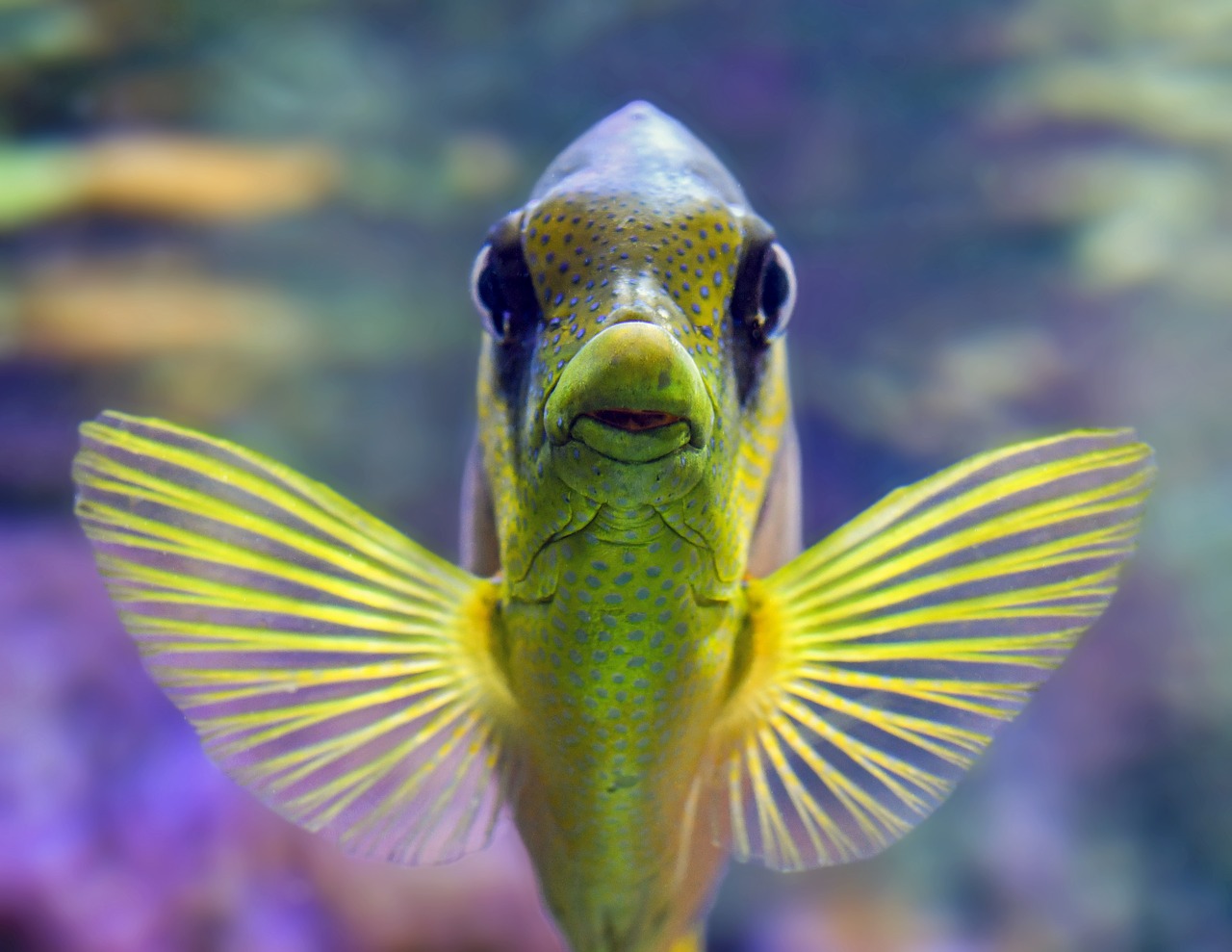 If you are a big fan of exotic and expensive fish and keep looking at their pictures over the internet, then you are in the right place. In this article, I’ll list down the top 10 most exotic aquarium fish in the world that will mesmerize you with their breathtaking appearance and characteristics.

So, relax in your bed and enjoy the article. 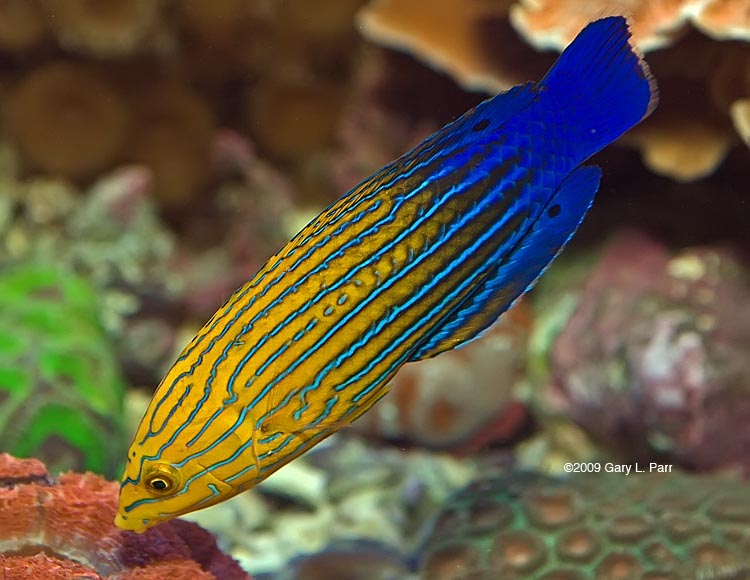 Feminine Wrasse fish is named after a pretty female for its beautiful coloration that includes a bright shining yellow body with electric blue stripes that extends and merge into a solid blue tail.

These fishes live throughout the South of Pacific from Australia to Easter Island.

If you want to show off to your rich friends by keeping her in your aquarium, it would probably cost you anywhere around $600 to $900.

With beautiful big lips and strong teeth, it swims so gracefully in the water that it resembles a confident and well-behaved royal princess walking gracefully in her own palace. 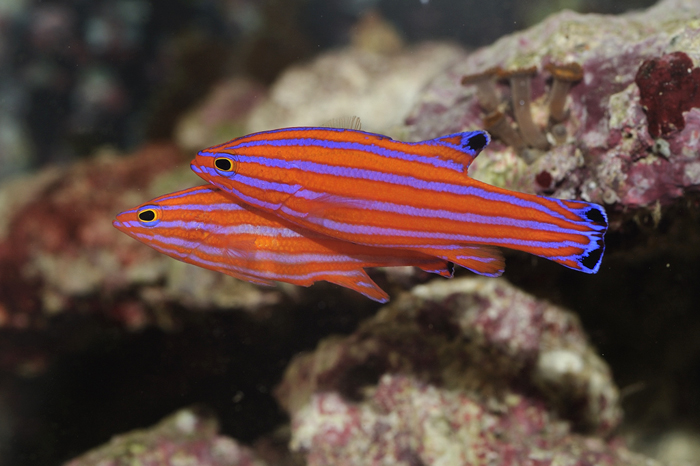 The next fish on the list is one and only Candy Basslet. The scientific name for Candy Basslet is Liopropoma Carmabi.

Candy Basslet fish comes from the Caribbean and most often found in southern parts of the Caribbean. It has its preference for deepwater habitats and likes to hide in and out of holes.

This makes it difficult to catch this fish as you have to dive deep, and you should know how to catch this fish. In the US aquarium market, this fish generally costs around $1000. Occasionally, you can find a deal for around $750 to $900, but in Asia, it’ll surely cost more than $1000.

Like the Feminine Wrasse, it has a beautiful coloration with a bright yellow body and attractive purple stripes with a flag tail, which makes it totally worthy of being on this list.

With that beautiful, classy look, it can decorate your aquarium like never before. Definitely check it out if you ever get a chance to see it. 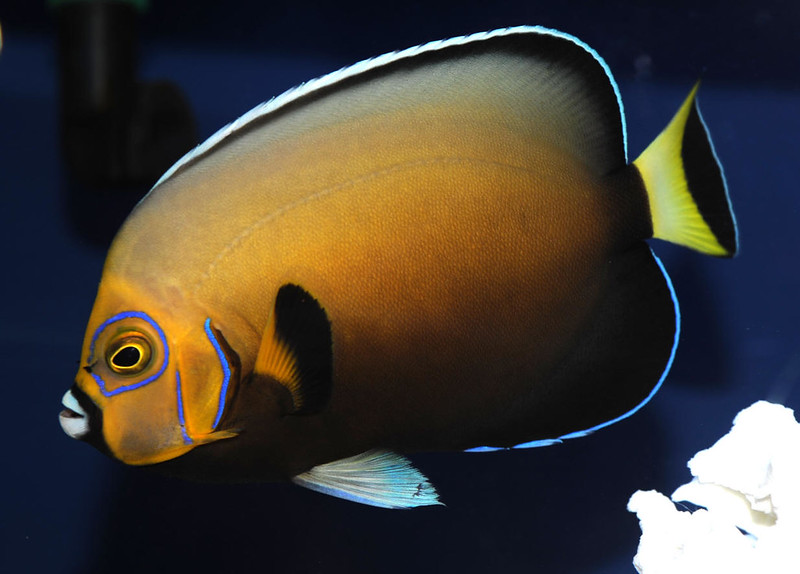 The next fish on the list of most exotic fish is Conspicuous Angelfish, also known as Chaetodontoplus Conspicillatus.

This is a very enigmatic fish that ranges from the East coast of Australia up to New Caledonia. Most of the Conspicuous Angelfish for aquariums generally hail from New Caledonia.

One thing that really fascinates me about this fish is that it has an inverted price structure so, smaller the fish the costlier it is. This is due to the fact that smaller specimens adapt much better to aquarium life. It is among my all-time favorite rare aquarium fish.

The fine scales present on its body make its body color look so smooth that you can’t resist admiring its beauty. It generally costs between $1500 and $2000 for a big one and around $2000 for a small Conspicuous Angelfish.

If you see this fish in person, you’ll agree that it is worth that price. 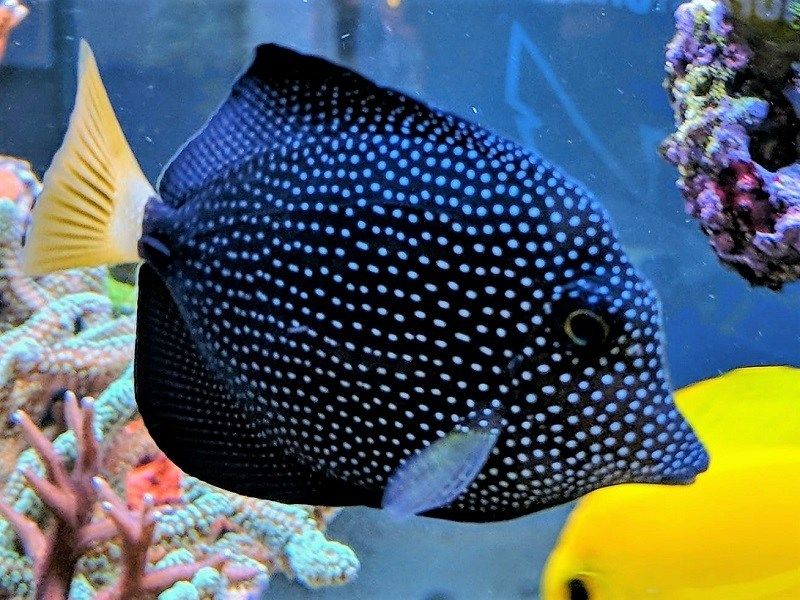 Now we have the first sturgeon fish on our list. This fish is definitely kept as a status symbol. The Yellow Tang is available widely in our aquariums and can be bought for just $50. Another version would be the Red Sea Purple Tang that costs around $200, but if you want the super exotic ultimate surgeonfish, then you have to go with the Gem Tang.

This is the fish that I dreamed of since I was a kid. If you are a big fan of exotic fish, you might have seen the pictures of gem tang in books. The price of this fish varies a lot, depending on where you live.

One of the reasons for their inflated price is that they are seasonal and considered solitary, which means they aren’t easy to find, and when you do find one, it is usually alone. Also, there is a massive demand for this fish in the UK, and due to scarcity, prices have risen up too much.

Gem Tangs are easy to recognize with a beautiful Black colored body adored with white speckles on it and a yellow tail. A few years back, they were scarce and difficult for hobbyists to get one, but fortunately, these days, they are becoming widely available.

Fortunately, considering their price tags, their care requirements don’t differ significantly from other Zebra Tangs and are actually pretty handy fish. All you need to do is to provide them with clean water, a nutritious algae-based diet, and suitable tank mates. 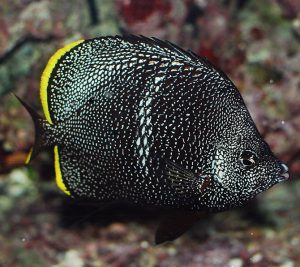 The dorsal fins and tail fins are edged with a bright yellow color, which brings a nice contrast of color on its body. The reason for this fish is in very high demand is that this fish is hardy and a great aquarium fish.

It is easy to keep and have a great personality, and outside Japan, you might expect this fish to cost between $2000 and $2500. If it is a small fish, then it is going to cost a little bit more because those are rarer.

This fish is not rare because it is a status symbol, but due to its gorgeous body shape and color and also because not many of them are shipped out of Japan, but this fish definitely deserves to be on this list. 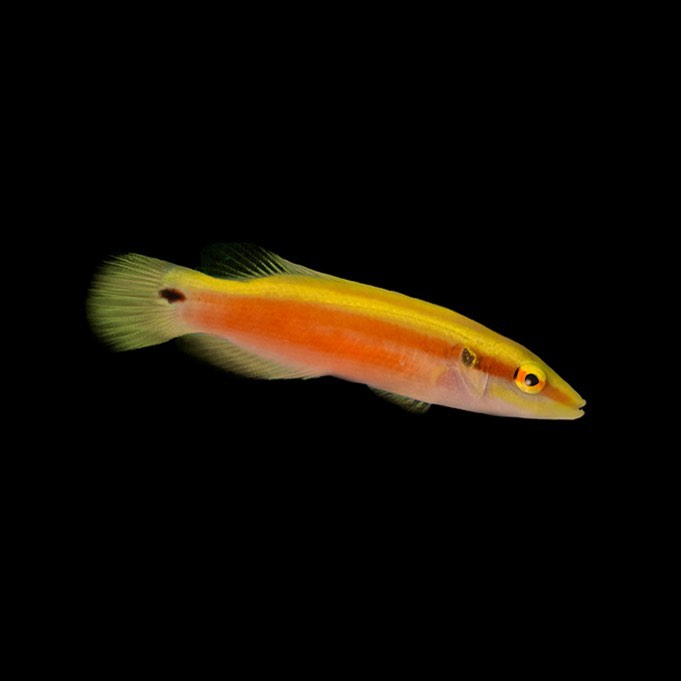 Number five on the list is the Sunrise Hogfish. Bodianus Sanguineus, commonly known as Sunrise Hogfish is a beautiful species of hogfish that is endemic to the Hawaiian Islands.

What makes this particularly exotic and expensive is that it lives really deep, so divers have to risk their lives just to get to this fish. But once these fish are collected, it is completely worth it. This is a hardy aquarium fish that is suitable for a wide range of different aquarium environments.

When it comes to food, Sunrise Hogfish is also not very picky and eats all kinds of foods. It has a nice looking red body with a yellow stripe going straight towards the dorsal.

An average price for a Sunrise Hogfish might range between $2500 and $3500. Well, that’s quite a bit of money for a red-colored fish with a yellow stripe.

There are only a few people in the world who are capable of going and diving in that deep to catch this fish in Hawaii. The risk to their lives is reflected in the fish price. 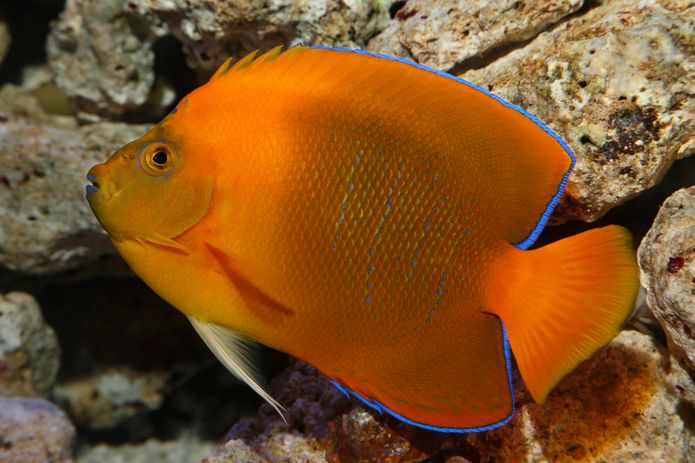 Clarian Angelfish, with a scientific name as Holacanthus Clarionensis comes predominantly from the Pacific coast of Mexico.

Up to a few years ago, all of these fish were wild-caught, but since June 2013, Bali Aquarich in Indonesia has been very successful in breeding a lot of these fish for the global aquarium market, but that has not really changed the price tag associated with this fish.

Like many other species, smaller Clarion Angelfish sells for a higher price than their adult counterparts. A captive-bred specimen from Bali Aquarich would cost around $3000 in the USA and probably more in some other countries.

One of the reasons for the huge demand for this fish and expensive price tag is its solid reddish-orange coloration, and red color is associated with wealth and prosperity in Asian cultures, particularly China.

Clarion Angelfish comes with a nice looking brownish-green head and a small mouth. They have a bright orange color behind their head and a strong red-colored tail at the end, which makes it one of the best-looking fish. 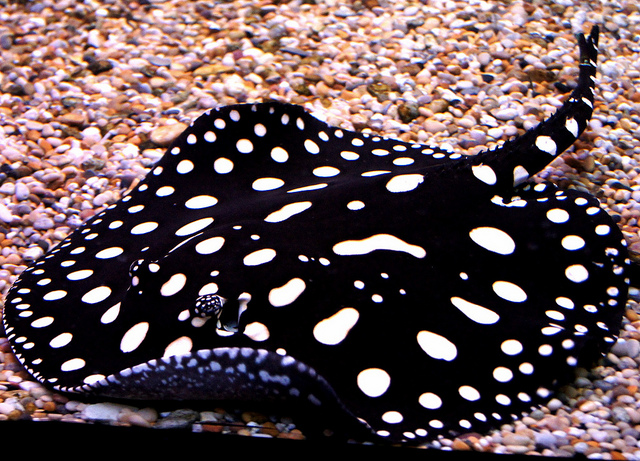 The next fish in the first freshwater fish on our list. Black Diamond Stingray hails from the Amazon River Basin, Brazil.

This fish was virtually unavailable up until 2008. The Black Diamond stingray is the special form of Leopoldi species, and it is recognized by its black body with white spots.

The species is considered rare in its native environment of Brazil, but thankfully most aquarium specimens are now captive-bred. The color combination is totally amazing, and it can bring anyone’s attention to it with that dark black body with beautiful white patterns on it.

Black Diamond Stingrays are generally bought in pairs, which can cost fish keepers around $10,000 per pair as they can earn more money by breeding and selling them. 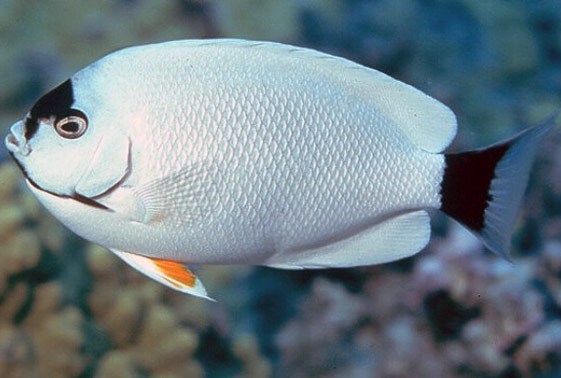 Masked Angelfish is truly a masterpiece created by nature. This fish is among the list top 5 most expensive aquarium fish in the world. What makes this fish very expensive is the high demand due to its very beautiful white coloration.

The most attractive white marble coloration on its body and a dark black coloration near its eyes gives it truly an angelic look.

Most of the Masked Angelfish in the aquarium marked today are captive bred, but due to continuously increasing demand of these fish, prices have not gone down. Angelic white coloration of these fish is different from all other species of Angelfish, and its beauty is truly mesmerizing.

These fish show a juvenile coloration with a pure white body and a dark eyes stripe, but as they mature, the male Masked angelfish will have a little variation in color. 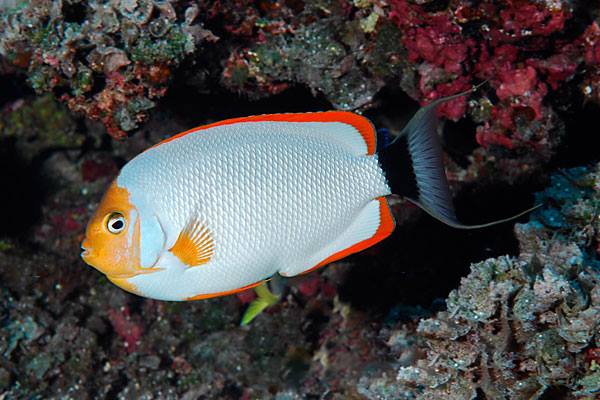 Adult male Masked Angelfish also have a solid white body but with a pleasant bright yellow-orange dorsal fins and a yellow face. 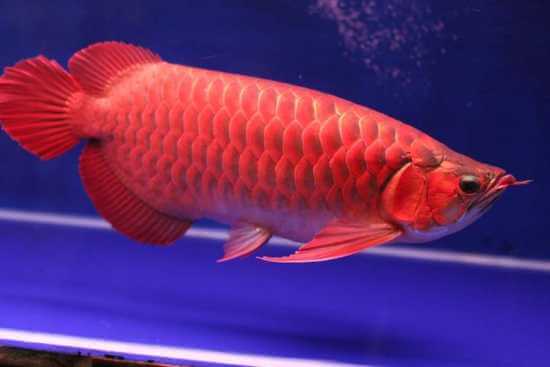 As we save best for the last, we showcase you the Red Asian Arowana fish, aka Dragon Fish that hails from various parts of Southeast Asia and Indonesia. Red Asian Arowana is the most expensive and exotic pet fish in the world.

This fish is very rare in its native habitat. Hence, almost all Red Asian Arowana available today are captively bred and are sold for more than $10,000.

Asian Arowana fish come in many colors, but as red color is the most desirable, it can cost you more than $50,000. The demand for Red Asian Arowana is pretty high in Asian countries, especially, China.

Also, due to the Endangered Species Act, Asian Arowana cannot be brought legally to the United States, so if you dream of owning a Red Asian Arowana, you can’t fulfill it unless you move to Asia.

Well, that concludes the list of top 10 exotic fish in the world. I hope you enjoyed reading about these amazing fish breeds as much as I enjoyed writing about them.

What Do Starfish Eat? Feeding Starfish In Aquarium