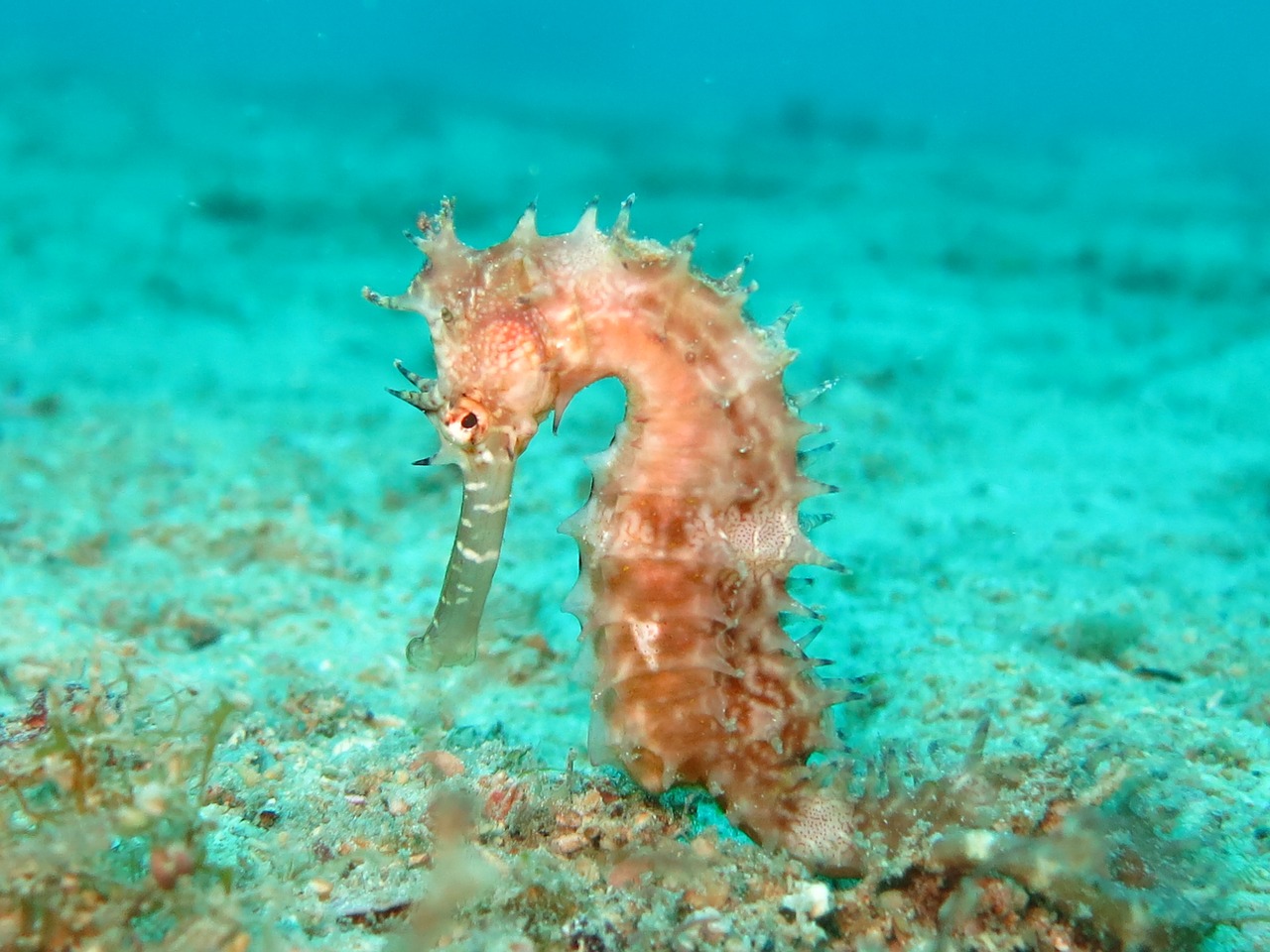 Seahorses are a fine example of nature’s exuberance of evolution, these tiny creatures resembling the Knight in a chess game are most commonly found living in coastal sea waters. The exquisite grace and perfection with which they float among the coral reefs & seagrass beds on the hunt for plankton and small fishes is truly a sight to behold.

The way magnificent creatures appear to float around peacefully through the coral reefs or grass beds is truly a sight to behold. Though they are not generally aggressive they are no less than a lethal hunter.

Sea horses are truly an enigma of the marine ecosystem. Though they are fishes their digestive system, the way they consume food, their hunting techniques they all drastically differ from their close relatives.

A predator without teeth?

The genes responsible for developing mineralized teeth and enamel are not found in sea horses. Down the evolutionary lane, they developed long tubular snouts with a small mouth and no teeth.

Unlike the other fishes that use their mouth to catch prey, sea horses use their long snout to suck in their prey like a vacuum cleaner.

These teeny weeny creatures with a small mouth and a long snout mainly eat planktons, small fishes, copepods, brine shrimps, mollies, side swimmers, guppy & rotifers. Basically, anything that crawls at the bottom of the ocean or floats in the water is potential prey for them.

Let us have a close look at the way the hunt & digest their prey.

Sea Horses are one among the marine life forms with the ability to change its color and they do it for all sorts of reasons. They may change color to mimic other organisms, to blend in with their surroundings, to deter predators or to pound upon their prey stealthily.

Sea horses have sack-like organs called chromatophores embedded beneath their skin. Each sack contains 1-4 pigments which are controlled by the contraction and relaxation of the tiny muscles controlling the chromatophores. The intensity of contraction or relaxation results in the different colors being displayed in varying intensity.

The chromatophores are controlled in 2 ways:

How do sea horses hunt?

Sea horses are not good swimmers neither are they swift but they know to make the best out of their stealth. It is for this reason they are most commonly found anchored to corals or seaweeds using their prehensile tails.

When a Sea Horse spot a prey they move slowly and silently towards the prey without alerting them. Once the prey gets into their kill zone they rotate their neck and bring the long snout close to the prey and slurps them in.

Preparatory: This phase involves stealthily approaching the prey without alerting it. Once the prey is in the kill zone the neck is flexed ventrally and the long snout is brought close to the prey.

Expansive: In the expansive phase buccal cavity is expanded, head in the lifted position, and the prey is sucked into their mouth.

Recovery: Once they have swallowed the food the hyoid apparatus, head & jaw are brought to their original position.

Sea Horses are not always into aggressive hunting. It is seen that the presence of vegetation around them greatly influences their eating behavior.

When in areas with a small vegetative cover they prefer to stay anchored to corals or seaweeds and wait patiently for the prey to walk into their kill zone. In places, with extensive vegetation, they keep an eye open for prey they are even found feeding while swimming through these regions.

How often do Sea Horses eat?

Another puzzling fact about sea horses is the absence of a stomach. Whatever food they eat it goes straight to the digestive system and the nutrients are absorbed fast. In order to survive, they have to eat constantly.

The digestive system of a Sea Horse

The digestive system of a sea horse is fairly simple. They don’t have a mouth, teeth or stomach, unlike other fishes. Which means the food is not broken down until it reaches its intestine. It is for this reason sea horses have to eat constantly for survival.

The process of excretion in a sea horse

“Did you know that sea horses do a special 360-degree movement to excrete the waste from their body?”

Can I feed a Sea Horse in captivity?

It is possible to keep a sea horse in captivity but it is not for inexperienced keepers. Sea Horses are not used to eating frozen food or fish food rather they only eat prey that is alive. If you are so keen on having them in an aquarium