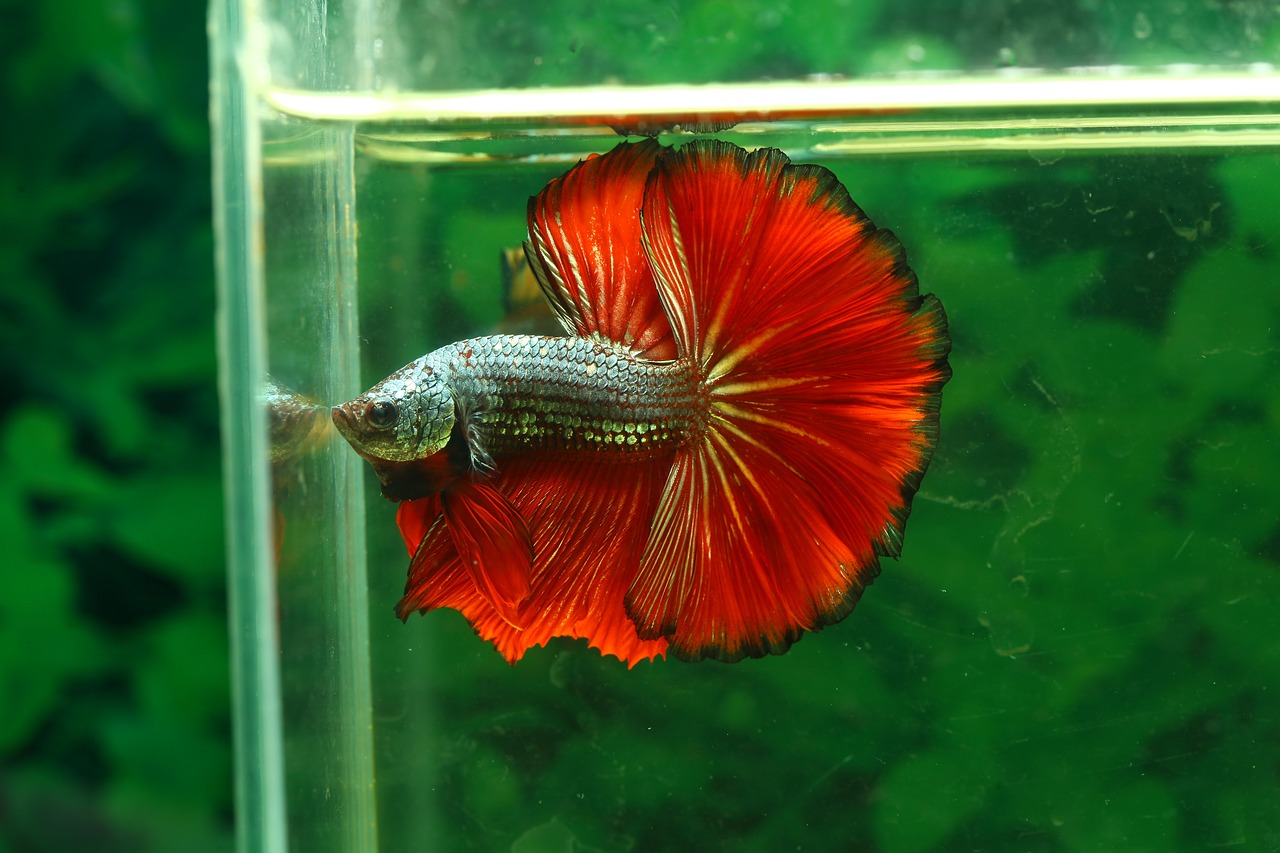 Well, it is perfectly justifiable because you don’t see them sleep anytime. All you can see is them floating in the water or behind some toys inside the aquarium and the moment you put your hands in the water you can see them swimming swiftly. This behavior makes most pet owners confused as to whether betta fish sleep or not.

In this article, we will discuss in detail some stunning facts about the sleep of a betta fish.

Yeah, betta fish too sleep like all other species. But unlike others, betta fish are light sleepers. They can’t just go and have a deep sleep because they may end up being an easy snack for the predators. This is why we prefer the word “power nap” instead of sleep.

The reason why most pet owners are doubtful about a betta fish sleeping is that they seem to be knowing even the slightest movements surrounding them.

This behavior does not change even when they are in a safer environment like an aquarium. This alertness is imprinted in them and these natural instincts do not go away easily.

Another reason why most pet owners do not see a betta fish sleeping is that they are not nocturnal species. Which means they are active during the day and sleeps at night.

Eyes of a betta fish are very sensitive to light. Even if you sneak up to a sleeping betta fish at night the moment you turn on some light they’ll wake up.

How do betta fish sleep?

Betta fish are known for the bizarre postures they sleep in. The can be seen floating in the water, dangling upside down, sleeping in their sides on aquarium floors, sleeping on leaves, and so on. In fact, it doesn’t matter how much postures we identify, the betta fish will something new the next day.

It is important to note that these bizarre ways in which they sleep play an important role in their survival. As mentioned in the previous sections, betta fish are virtually defenseless against predators. Their only way of defenses is to swim away swiftly and hide somewhere.

While sleeping they always sleep in these bizarre postures to deceive their predators by pretending to be dead. If you have closely observed a betta fish taking a nap, you will know how still they remain. The only part that moves will be their gills. Most predators are fooled by this trick giving the betta fish a better chance of survival.

How do I know if my betta is asleep and not dead?

If your betta is asleep, chances are that the moment you go anywhere near the aquarium it is going to wake up and swim. 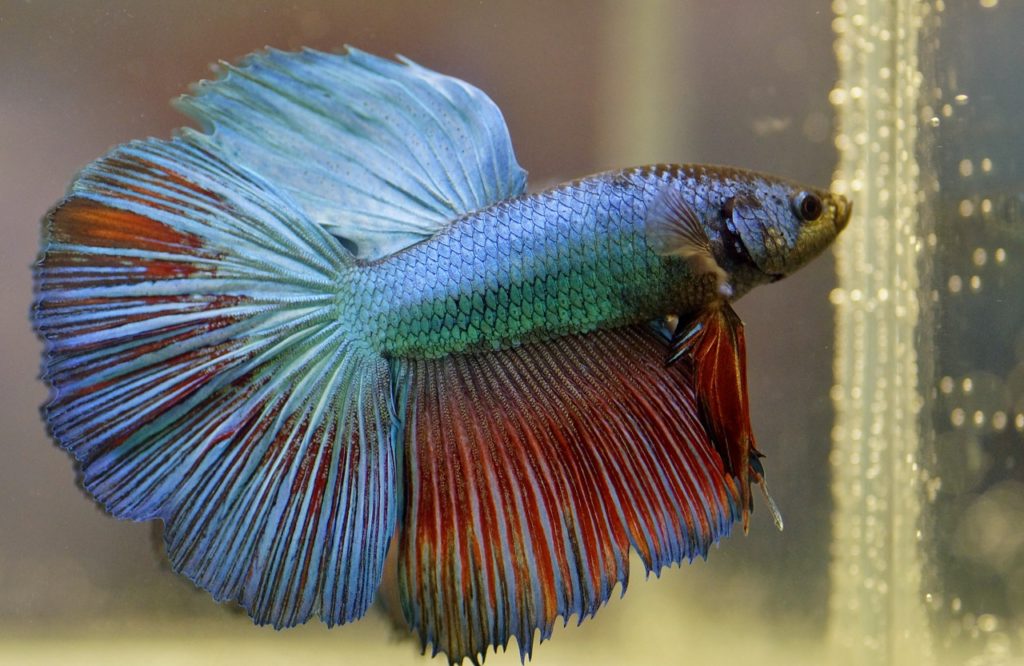 Do I have to worry if my betta fish rest on their sides?

No, you don’t have to worry because it is quite a common behavior seen among betta fish. But that being said if you find your betta in this posture for a longer period, it might be an indication that something is wrong.

For instance, if your betta has swim bladder disease, it might have trouble remaining upright as the disease affects its ability to remain buoyant. The betta fish may show the same symptoms in the event of ammonia poisoning too.

Is it normal for a betta fish to sleep on the aquarium floor?

Yes, it is quite normal for a betta fish to sleep on the aquarium floor. But as discussed in the previous section, you need to make sure that they don’t remain as such for a longer period.

Is it true that betta fish sleep on leaves?

Yes, betta fish sleep on leaves. In their natural habitat, betta fish hide inside thick vegetation behind aquatic plants before they take a nap. They are found to do the same even when they are in a safer environment such as an aquarium.

Having plants inside an aquarium is going to make them feel home and while providing them with great support and helping them stay comfortable.

Do betta fish change color when they sleep?

Yes, betta fish change color when they sleep. They turn pale while they sleep and it is a normal behavior seen among betta fish. As discussed in the earlier sections the only defense a betta fish has against its predators is to hide. Which makes a betta fish most vulnerable to attack when they are asleep.

It is for this reason betta fish turn pale to make them difficult to spot by the predators. In their natural habitat, they turn pale and hide inside thick vegetation while they sleep for additional protection.

So, next time you see your betta fish in a pale color, do not worry!

Do betta fish sleep only when it is dark?

If you have a pet betta fish in your aquarium, you can give th3m 8 to 10 hours of darkness by turning off the lights or covering their aquarium.

Why is my betta fish sleeping all the time?

Before we proceed further you need to be aware that each betta fish may sleep for different durations of time. The only thing to keep in mind is that if your betta is sleeping during the night and active during the day there is nothing you need to worry about.

But if you feel that your betta fish is not active during the day and is sleeping then there must be something wrong. We will discuss the different possibilities in the following section.

Inadequate lighting inside the aquarium

The sleep cycle of a betta fish is very much dependent on the illumination inside the aquarium. If the aquarium is not sufficiently illuminated or you keep the aquarium there isn’t enough lighting, your betta fish may feel that it needs to sleep more.

If you find your betta fish sleeping for longer periods adjust the lighting and use bright lights.

When the water inside the aquarium is too cold your betta might go into a temperature shock or its metabolism slows down. Either way, he is going to be less active because his body cannot produce sufficient energy when the temperature is too low.

This means he is going to end up sleeping more to conserve energy. It is advisable to have a heater for your tank, especially during winter.

Excessive sleeping might be a symptom of poor health or some diseases. If you find them sleeping too much you should look for swelling, spots or sores and treat them accordingly if you find one.

Your betta may be old

If you have had your betta for some years, excessive sleeping is normal because betta fish need to sleep more when they are old. The best thing to do is to not disturb them when they are asleep.