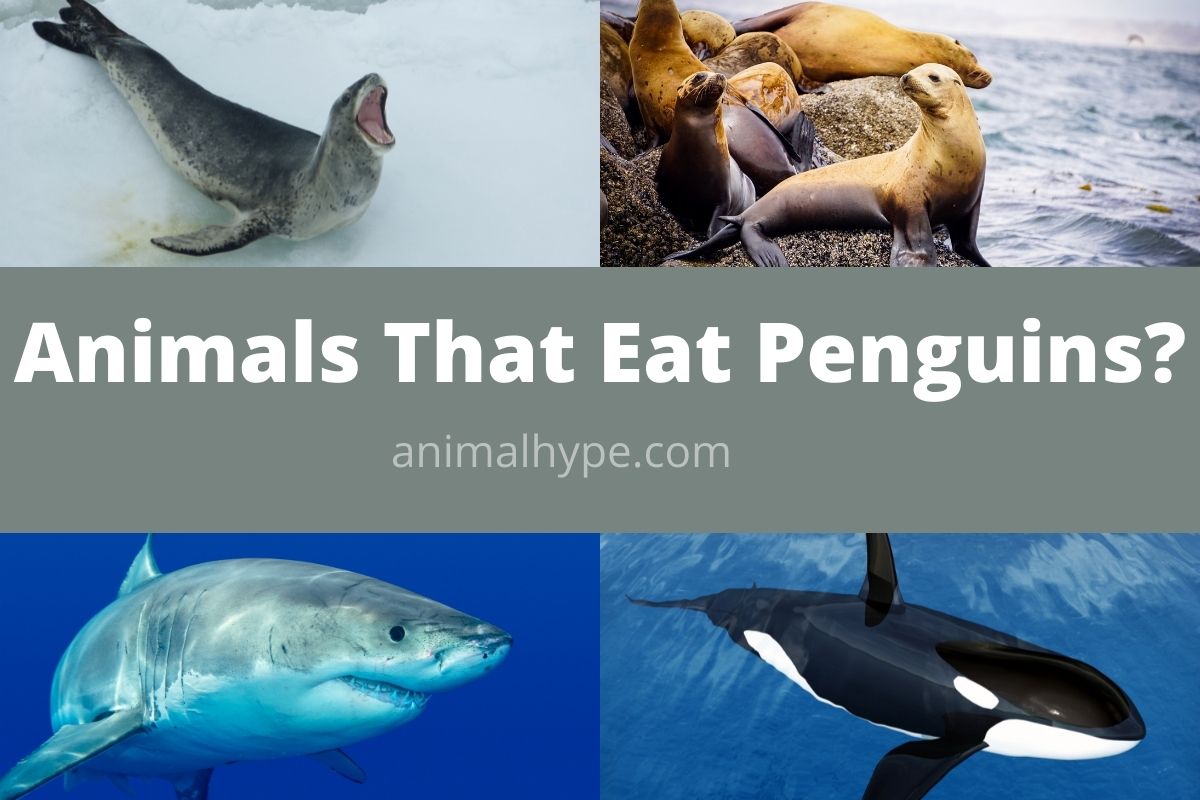 Penguins are often cited as the most adorable creatures in nature, so imagine my surprise when I discovered that penguins have many natural predators. In fact, they have a lot of predators. Think about that for a moment – you have predators too!

So what eats penguins? In the marine environment, seals, sea lions, and sharks are the primary predators of penguins. On land, Armadillos and Tasmanian Devils are the prominent penguin-eating mammals. Avian predators like skuas, falcons, sheathbills, and petrels hunt penguins and their chicks as well as eggs.

Penguins are a group of aquatic birds, which have their webbed feet, yellow-black eyes, and black and white coated bellies. Just like other species of birds, penguins also experience deaths due to predators. Penguin predators can be broadly classified as terrestrial (land) based predators and aquatic (water) based predators.

In this article, we will learn more about the major predators of penguins in different landscapes and locations. They might encounter some of the penguin predators listed below in one or more places in their geographical range.

Marine Mammals that prey on Penguins

Commonly known as “Sea Leopard,” the Leopard Seals are a seal species found in Antarctica closely related to the Ross Seals (Ommatophoca rossii).

With only the Orcas as their natural predators in the marine world, they are the second-largest seal species in Antarctica, smaller than the Southern Elephant Seal (Mirounga leonina).

These seals are perhaps named after the leopards due to their distinctively long body, which is quite muscular compared to the other seals.

The most remarkable feature of their body is their skull, which is very much like that of the reptiles, having an elongated shape and massive jaws. It is these jaws that make enable them to become one of the alpha predators in their environment.

While the young leopard seals mostly feed on squid, krill, and fish, the adults have a quite diverse diet. Penguins are their primary prey; they actively hunt and feed on 6 different penguin species that are listed below:

Other than penguins, they’re also known to feed on other seal species, such as Crabeater Seals and Weddell Seals, occasionally.

Also referred to as “Killer Whales,” the Orcas are a species of toothed whales that belong to the oceanic dolphin family. Being the largest family members, these whales are apex predators, with no natural predators of their own.

Orcas have an easily recognizable body with black upperparts, white underparts, and two white patches, each near an eye. Although these whales have a diverse diet, each whale (or group of whales) picks a prey they feed exclusively on; it could be seals, fish, or other dolphin species.

At times, the Orcas have also been found attacking other, larger cetaceans. But since it is a more time-taking process, they generally prefer to hunt smaller and weaker animals, such as penguins, walruses, seals, sea lions, and otters.

The Fur Seals are a subfamily of seals recognized by the thick underfur, externally present ears (pinnae), whiskers around their mouth (vibrissae), and long, muscular limbs.

Both sexes of the fur seals are significantly sexually dimorphic, with the males being about 3-5 times larger than their female counterparts.

Although the diet of these seals varies for different species, penguins are prey to many species. The New Zealand Fur Seals are an example of one such species.

Like the Fur Seals, the Sea Lions are another subfamily of seals belonging to the same family (Otariidae).

These seals have characteristically thick fur, a big chest and belly, long fore flippers, external ears, and the ability to walk on all four limbs.

There are seven species of sea lions in the world, one of which has gone extinct:

Most sea lion species are not fussy eaters when it comes to their diet and would feed on anything they can catch within their range.

Some of their prey are lamprey, herrings, dogfish, salmon, clams, anchovy, and squid. Although seabirds, dolphins, and penguins are not a part of their primary diet, some sea lion species occasionally prey on them.

Sharks are a large group of fish belonging to the subclass Elasmobranchii. The skeleton of these fish is made of cartilage, with about 5-6 gill slits present on the side of their head and separate pectoral fins.

There are over 500 different shark species that have varying sizes and geographical locations. Several shark species are also apex predators in the marine world and tend to consume any marine creature they can find.

The Great White Sharks (Carcharodon carcharias), the Hammerhead Sharks (Sphyrnidae), and the Tiger Sharks (Galeocerdo cuvier) are some shark species that prey on penguins commonly.

Terrestrial mammals that prey on Penguins

Named after the island they originated in, the Tasmanian Devils are the largest extant carnivorous species belonging to the marsupial family.

Earlier, these marsupials were only found in Tasmania but have now been introduced to New South Wales.

Tasmanian devils are about the size of a small dog, with a large head and a tail that is about half as long as their body length. Their entire body is covered with a black fur coat, except for the uneven white patches on their chest and rump. Unlike other marsupials, their forelegs are slightly shorter than their hind legs.

These marsupials are opportunistic feeders that tend to eat more carrion than living animals. Small, native mammals like Potoroos, Wallabies, and Bettongs and sheep, rabbits, reptiles, birds, and frogs are a part of their primary diet.

Although penguins are not included in their regular diet, the Little Penguins (Eudyptula minor) have become their prey on some occasions.

The Armadillos are a group of New World placental mammals that are endemic to the Americas. There are currently 21 extant armadillo species in the world.

These small-to-medium-sized mammals are famous burrows and have sharp claws that help them in digging their underground homes.

Despite their poor eyesight, their immaculate sense of smell enables them to hunt efficiently.

The Magellanic Penguins (Spheniscus magellanicus), a South American penguin species, are the only penguin species present in the same geographical location as the armadillos. Although adult penguins are safe from these mammals, they cannot be said about their eggs and chicks.

Birds that prey on Penguins

Sheathbills are a family of wading seabirds that breed on the Antarctic Peninsula and the subantarctic islands. There are only two species in their family:

These birds have a stout body covered with a thick, white plumage; both species appear similar except for their different-colored faces and legs.

The diet of these birds is more or less alike as well; they’re opportunistic feeders and scavengers that eat seal pups, chicks, and eggs of birds like penguins and cormorants.

Besides, they’re also known to feed on small invertebrates, carrion, and feces.

As the name itself suggests, the Giant Petrels form a genus consisting of two species that are the largest among all petrels, namely:

The former is slightly larger in size than the latter. These birds resemble the albatrosses in appearance, except for their bill; while albatrosses have tube nostrils separated on either side of their bill, the nostrils of petrels are joined together.

Giant petrels are opportunistic feeders that feed both on land and at sea, unlike the other procellarids. Penguins, seals, and their carrion make up a large part of these birds’ diet.

The Skuas are a group of 7 predatory seabirds that are known for their aggressive disposition.

The diet of the Skuas generally includes fish, mollusks, crustaceans, squid, krill, seabirds, their chicks, and eggs. The major penguin-eating skua species are the Chilean Skuas (Stercorarius chilensis) and the Brown Skuas.

Historically known as “Duck Hawks” in North America, the Peregrine Falcons are large, crow-sized birds of prey with widespread distribution.

The head, back, and wings of these birds range between slate-blue and blackish in color, with rusty white undersides and dark brown bands on their chest.

Both sexes appear similar but are sexually dimorphic in their size, with the females being 30% larger than their male counterparts.

Peregrine falcons are powerful hunters that primarily feed on medium-sized birds, occasionally preying on reptiles and small mammals. These birds are believed to feed on 1/5th of the world’s bird species, and the penguins are included in that group.

Penguins are a cold-blooded aquatic bird that lives in the milder parts of Antarctica (the continent) and the southernmost parts of Australia. They spend most of their time in the water and sometimes come to shore to sleep. This is when other animals will hunt for penguins.

Penguins are all known for their adorable and funny personalities. It may be hard to imagine that penguin predators are out there in the ocean, but as you know now there are plenty out there.

So here we are at the end of the article. Thanks for reading all the way to the end and we hope this has been helpful. If you do have any other ideas for blog post ideas please don’t hesitate to let us know.

Don’t forget to share it with your friends! Thanks again for reading!