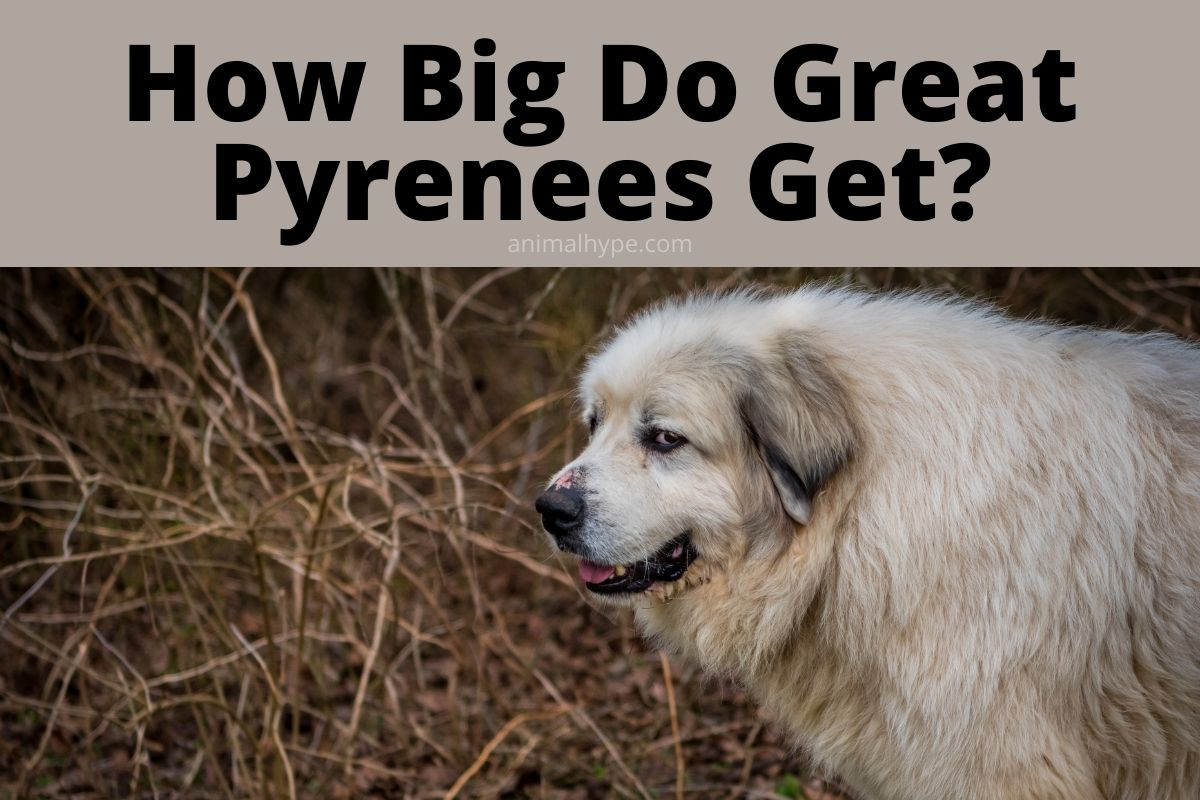 Known for getting along with children, the Great Pyrenees are a large breed of mountain dogs with a long history of being the livestock guardian for our cattle. While these dogs are referred to as “Pyrenean mountain dog” in Europe, they are popular in North America by the name of Great Pyrenees. If you try to break down their American name, you will that the “Pyrenees” comes from the Pyrenees mountain range where they were originally bred. And, the “Great” in their name is indicative of their magnificent size.

In the past, the Great Pyrenees have served humans successfully as their livestock guardian. Today they are among the best therapy dogs, showering their owners with love and affection.

In this article, we’re going to talk about how big these dogs can get, how much time it takes them to their full size, and the factors that contribute to their growth.

The Size Of The Full-grown Great Pyrenees

Among all the dog breeds, the Great Pyrs are one of the giant breeds, belonging to the category of extra-large dogs. However, this comes as a surprise to many, because these dogs often seem smaller than they actually are at first glance. This is because of their seemingly gentle features and personality.

If you ask someone to compare the size of Great Pyrs to a Bullmastiff, Newfoundland, or a Saint Bernard, they will more likely say the former are smaller, but they would be wrong.

The Great Pyrenees have their average height ranging between 25-32 inches. Their maximum height is the same as a Great Dane, which is considered the tallest dog breed in the world.

Both sexes of the Great Pyrs differ slightly in their height. While the adult males’ height ranges between 27-32 inches, the females are about 25-29 inches tall.

How Long Does It Take Great Pyrenees To Be Fully-grown?

The Great Pyrenees take a substantial amount of time in reaching their full potential. This is common in the other extra-large dog breeds as well.

Although each individual dog’s growth varies slightly, on average they take about 2 years to grow fully. Moreover, they reach their full height relatively early, in the first year itself, but continue to put on more weight until they are two years old.

As we have mentioned before, both the Great Pyrenees’ sexes have a vast difference in their weight. The females seem lightweight in front of males with an additional 40-50 pounds on them.

Below, we will take a look at the growth rate of the males and females separately:

According to the table above, a male Great Pyrenees should weigh somewhere between 37-39 pounds when they are 3 months old.

In the next six months, they gain about 60 pounds more, and by the time they’re 9 months old, they’ve usually attained about 100 pounds.

From here to the point when they gain full maturity, the males put on only about 10-15 pounds.

Just like the males, the female Great Pyrenees also attain about 70-80% of growth when they are 9 months old. At this time, they are 69 pounds. After this, they only gain another 15-18 pounds until they reach full maturity.

When you compare the data given in the two tables, you can find the drastic difference between the weight of both sexes. For instance, even at the mere age of 3 months, the males have a good 10 pounds over their female counterparts.

The mental maturity of the Great Pyrenees also plays an important role in their full maturity. This refers to the stage when these dogs start behaving like an adult dog instead of a puppy.

The Great Pyrs reach their mental maturity at the age of 2 years as well. This would mean that at the age of 1 year, your Great Pyrs pup would already reach its full height, and be about 30 inches long and weigh about 77-105 pounds, but would still be a puppy.

When they are puppies, handling the Great Pyrs can be a challenging task for most dog-owners due to their large size and heavy body. If you are considering getting yourself a Great Pyrs, it is a fact that you should carefully think about beforehand.

Factors That Contribute To The Growth Of The Great Pyrenees’ Size

Although we have looked at the average figures of weight and height of all Great Pyrenees, each individual dog differs slightly from the others. This is because several factors determine the height and weight of an individual dog.

Below, we are going to take a look at two of the most important factors that contribute to the growth of a Great Pyrenees’ size:

Lineage and parental breeding play a key role in the size of the offspring.

The Great Pyrenees are an old dog breed, dating their origin as far back as 3000 years. Since we cannot be sure about the breeds that came together to parent these massive dogs, we also can’t say if they have a role to play in their size.

Another key factor in the size of the Great Pyrenees is nutrition. It goes without saying that nutrition plays an essential role in the growth of all dogs, including Great Pyrenees, especially when they are growing up.

However, in the case of the Great Pyrenees, being careful about their diet is even more essential. Over-feeding these dogs can quickly lead to several health problems, obesity being one of them.

We have curated a chart for you in order to help you provide the right nutrition to your Great Pyrenees until they reach full maturity:

Are Great Pyrenees friendly with cats? Yes, these large dogs have an amicable personality and get along quite well with most animals, including cats and other household pets.

Are Great Pyrenees noisy pets? Yes, these dogs can be noisy because they tend to express their feeling through their voice. They might bark while guarding your house, and also when they want to grab your attention.

Is training Great Pyrenees a difficult job? Training little Great Pyrs can be tricky because they can easily be distracted while learning new things. They are also difficult to handle because of their large size. But with the right guidance, you will be able to train them properly.

Conclusion: How Big Do Great Pyrenees Get?

To sum it up, the Great Pyrenees are among the largest dog breeds in the world. These dogs grow as tall as about 32 inches, just like the Great Danes, with their maximum bodyweight reaching over 120 pounds.

Moreover, Great Pyrs are not just large as adults, but as puppies as well. By the time they complete the first year of their lives, these pups are already at their maximum height, with a weight ranging between 80-100 pounds.

Although both sexes have the same white fur-coat and look mostly alike, you can easily differentiate between them based on their size. While having slight differences in their height, both sexes have a monumental difference in their weight. At their full maturity, the males are about 30 pounds heavier than their female counterparts.

Because of their incredibly large size, even as pups, it is not particularly easy to bring them up. Moreover, they also need proper training and socialization from a young age, or they can become very aggressive. Anyone wishing to own a Great Pyrenees must be aware of these things before bringing one home.

However, if trained properly, these dogs can be extremely affectionate and bond with children as well.