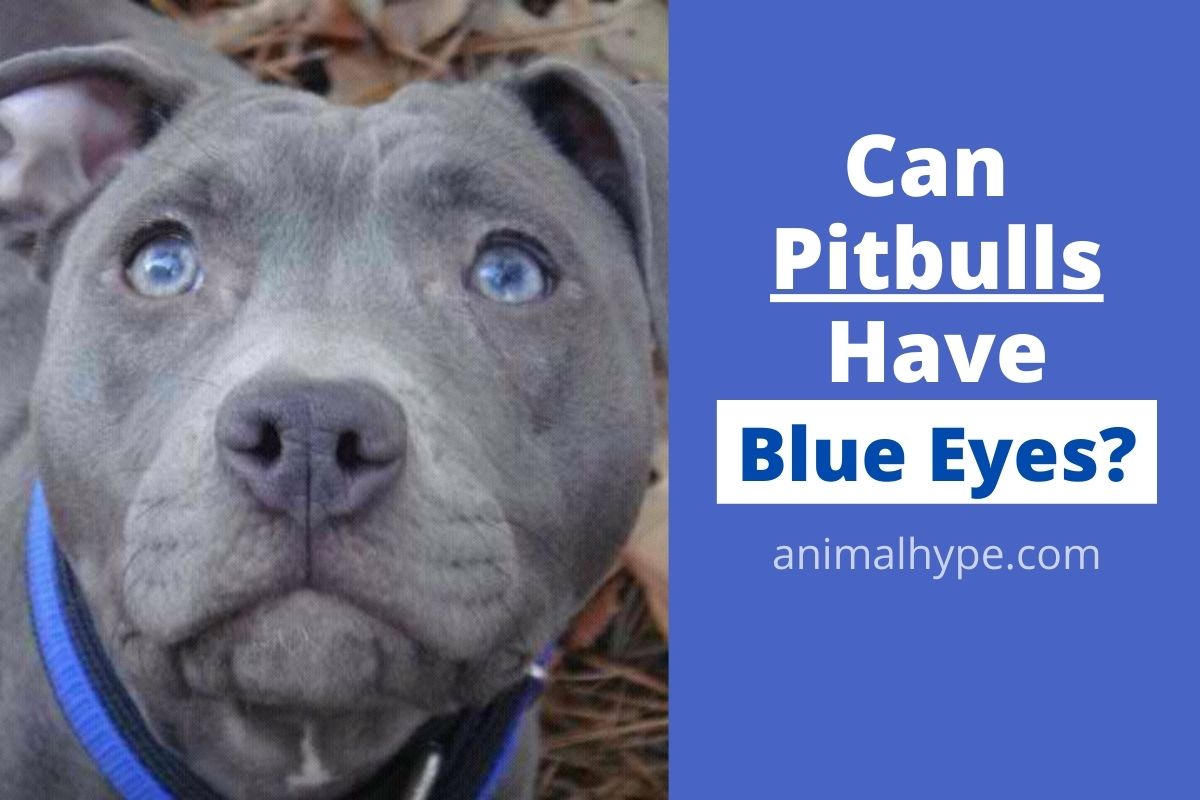 Blue eyes.  Have you ever seen a dog with blue eyes? It’s always brown, right? Wrong. Some dogs can have blue eyes and you may be surprised to learn that Pitbulls are one of them.

Pitbulls truly encompass everything that a loyal dog should be! They have big personalities that love spending time with their owners. Their hilarious and affectionate behavior is infectious and plays a big part in the reason why they make such great pets.

So, can Pitbulls have blue eyes? Yes, Pitbull puppies at birth are born with blue eyes. However, as they grow older, the blue coloration disappears. Adult Pitbulls may show signs of permanent blue eyes, but it is rare.

Continue reading to understand the when, why, and how behind Pitbulls with blue eyes!

About Pitbulls With Blue Eyes

While most Pitbulls are brown-eyed, factors like genetics and pigmentation can alter that characteristic. Let’s take a look at why Pitbulls develop those piercing blue eyes.

Melanin production and genetic make-up determine the color of the eyes and skin for dogs. The lower the melanin level, the higher the chances are that your Pitbull will have blue eyes.

ALX4 gene is necessary for mammalian eye development. There is still some mystery surrounding the influence of this gene on blue eyes.

A study by a DNA testing company, Embark Veterinary, analyzed the genetics of 6,000 dogs. It was found that a mutation of the ALX4 gene strongly correlates with the occurrence of blue eyes.

So, if you come across a Pitbull with the mutated ALX4 gene, it may be prone to have permanent blue eyes.

If you see a dog with a swirly and patchy coat, chances are they have the merle gene. Merle gene or the M locus gene is known to dilute the pigmentation around the nose, eyes, and fur.

The uniquely marked patches that intermix colors like tan, white and black, are a direct result of this gene! Pitbulls whose genetic makeup is made up of the merle gene have a higher probability of developing blue eyes.

Families that actively look out for Pitbulls with unique appearances may not mind the presence of the merle gene as such. However, this particular gene can increase the likelihood of health risks like blindness and deafness.

An overview of the dog’s genetic heritage may help make more sense of what issues your blue-eyed Pitbull might face.

What does it mean if a Pitbull has blue eyes?

Say, your Pitbull is now entering the stage of adulthood and still has blue eyes. There is a lot to be said then for the circumstances of having a Pitbull with permanent blue eyes.

Here are a few points that you can definitively state for blue-eyed Pitbulls.

It is excluded from the standard.

Many breed clubs and standards do not recognize blue-eyed Pitbulls as a standard for Pitbull characteristics.

The Pitbull breed is not known to carry the merle gene or blue color causing genes. That means the genes may have found their way into the bloodline and the blue-eyed Pitbull is not a purebred.

Breeders may have adopted a breeding method to specifically have Pitbulls with blue-colored eyes.

The importance given to color completely disregards the health of the Pitbull. As a result, the doggo industry does not recognize blue-eyed adult Pitbulls as a standard.

Merle genes can alter melanin levels for skin color. Eumelanin is a type of melanin responsible for the black pigment in a dog’s coat.

Apart from affecting the color of the eyes, the merle gene also does not allow for full black pigmentation of the coat. This results in blue-eyed Pitbulls having coat colors like grey, tan, brown, and white.

Blue eyes do not necessarily indicate the presence of health issues. You can have a perfectly healthy blue-eyed Pitbull! However, it cannot be denied that Pitbulls with blue eyes come with vulnerabilities due to the merle gene.

The merle gene puts them at higher risk for developing health problems in the future, in comparison to brown-eyed Pitbulls. These Pitbulls may develop ear and eye defects that will require special care and attention.

As said before, genetic heritage is the best determinant to figure out if your Pitbull will develop health problems in the future.

What are the risks involved with Pitbulls with Blue Eyes?

So, let’s take a look at what health risks are involved with owning a blue-eyed Pitbull!

In general, the Pitbull breed has predispositions to congenital deafness. In addition to that, if your Pitbull carries the merle gene, their chances of developing deafness increase!

Another gene linked to causing hearing problems is the piebald gene. Piebald gene is responsible for unpigmented or multicolored spots on your dog’s coat.

Both merle and piebald genes are linked to deafness since they reduce the presence of mature melanocytes. Melanocytes are melanin-producing cells present in the inner ear.

To rule out any hearing issues, you can conduct either a hearing test or a genetics test on your Pitbull.

Eye vision defects are more likely to occur in blue-eyed Pitbulls carrying the double merle genes, i.e., the M/M trait. Double merle genes are passed on when both parents are carriers of the merle gene.

Pitbulls with double merles can suffer from vision defects like complete or partial blindness.

As already mentioned, merle genes affect the pigmentation of both skin and eyes. An extreme pigmentation loss can result in albinism. Your Pitbull will have little to no color in their eyes and skin! Albino Pitbulls typically have a white coat, pink nose, and blue eyes.

Albinism is also associated with deafness and vision problems. Albino Pitbulls with blue eyes have incredibly sensitive skin and eyes.

So if you do decide to adopt one, make sure to go through the special care guidelines given for this particular dog.

You may wonder why an eye color calls for so much concern. Although the color may not seem important, blue eyes can actually make dogs vulnerable to ultraviolet radiation!

Pigmentation in the eyes and skin is there to protect you from the light damage of the sun. The lack of pigmentation in their eyes means the blue-eyed Pitbulls are susceptible to light sensitivity.

That is why owners of blue-eyed Pitbulls are asked to take extra care and caution where their dog is concerned.

How do you care for a Pitbull with blue eyes?

A blue-eyed Pitbull can fit right into your life if you are willing to invest the time and effort to look after them. We have already established that these Pitbulls are susceptible to ocular issues.

If you sense your Pitbull feeling some irritation in their eyes, take immediate steps to keep it under control.

Here are some measures you can consider taking to protect your Pitbull’s blue eyes.

Yes, sunglasses can also be worn by dogs! Pitbulls are active dogs and will want to step out in the sun often. Extended playtimes in the sun can hurt a Pitbull’s blue eyes.

To limit their exposure to the sun without cutting down on playtime, you can get them sunglasses!

The tinted protective lens can provide their eyes some coverage from the UV rays of the sun while they play.

A visor is essentially a hat for your dogs that looks cute and protects their vision too!

If your Pitbull finds sunglasses uncomfortable or tight, then visors are a good alternative. Not only does the visor provide shade to the eyes, but it also protects the facial skin.

This is important, considering a lot of blue-eyed Pitbulls also lack protective melanin in their skin. With a visor, your Pitbull can see better in the sun without squinting!

Light sensitivity can irritate the Pitbull’s blue eyes, making them scratch and rub their eyes. This can damage their already vulnerable visibility.

You can rinse their eyes with a saline solution recommended by a vet, preventing any further scratching or rubbing.

Do all Pitbulls have blue eyes?

Most breeds are born with blue eyes, but not all. It is incredibly rare for black, brown, and dark grey Pitbulls since their melanin levels are so high.

It depends! When they open their eyes as a newborn Pitbull puppy, you will see their eyes are foggy and bluish. As said before, melanin production always starts out lighter in color. However, eye color change will not happen overnight.

Once your Pitbull puppy reaches the three or 4-week mark, their eyes will start to develop, with the permanent color settling in.

It takes around 3 to 4 months for the permanent eye color to fully develop and “stay.” In special cases, puppies may take lesser or more time to achieve their permanent color. By the end, the majority of Pitbulls end up with brown eyes.

If your Pitbull still has blue eyes by the end of this period, it means they are a carrier of the merle gene.

Can my blue-eyed Pitbull breed?

Yes, but you must not let your merle Pitbull breed with another merle Pitbull! When your pet is breeding, you should consider breeding for health and temperament. Two merle Pitbulls will give birth to an offspring with the double merle trait.

While the offspring born may look striking with their icy blue eyes, they will also be vulnerable to serious deformities. It is not an easy task taking care of blue-eyed breeds. So your Pitbull can breed, just that owners should remember to do this responsibly.

Let’s go back to the original question – can Pitbulls have blue eyes? Yes, they can.

Most Pitbulls are born with blue eyes, but not all of them end up with it permanently. Those who do, develop it mainly as a result of their gene pool. Although they may have their issues, these Pitbulls deserve a loving home just as much as any other dog!

All you need to make sure is to take extra care of your blue-eyed Pitbull. You do that, and you will witness a happy and healthy Pitbull ready to embrace life with its family!