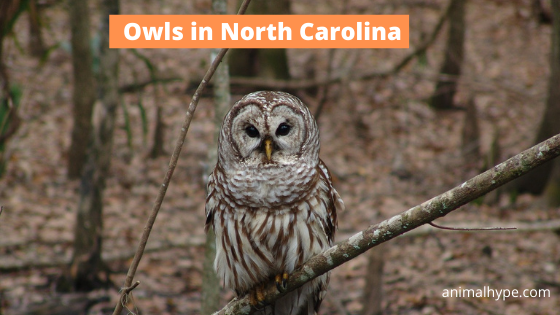 If you are a consistent bird-watcher, Cardinals, Chickadees, and Warblers might have become a common sight for you by now. Can you spot owls that easily as well? Not likely. It is not every day that you spot an owl flying over your backyard. After all, these nocturnal birds are rather solitary and prefer to venture out and hunt in an undisturbed environment.

There are 6 species of owls who reside in North Carolina. Five of them are true owls, and the sixth is a barn owl. In this article, we are going to tell you all about them: their appearance, sound, and other personality traits. 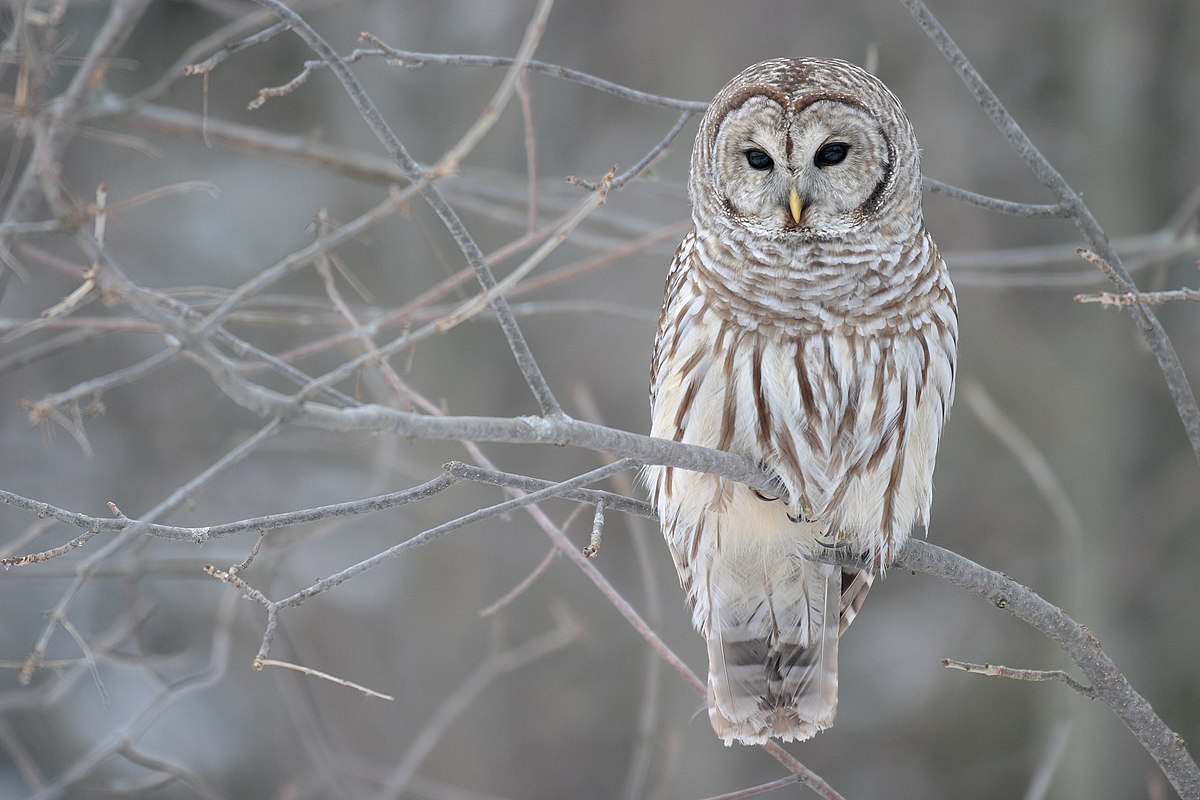 More commonly referred to as “hoot owls”, Barred owls are a large species of owls who belong to the true owl family. Although these birds are endemic to eastern North America, you can also find them along the west coast, where they are considered to be an invasive species.

Being nocturnal birds, these birds like to sleep off their days in well-hidden nests of the dense deciduous forests. Although they prefer to nest in the natural tree hollows, if they find an abandoned nest of other birds, they wouldn’t hesitate to make it their own.

When you compare the appearance of Barred owls with that of other owls found in North Carolina, you will find them too drab and dull.

Their body has an overall greyish-brown or dull brown coloration. They have white bars on their mantle and head, with white spotting on their wing coverts. Their head is comparatively larger than the rest of their body, with a roughly rounded shape. Their beaks are a bright shade of yellow, with brownish-black eyes set too close to each other.

They lack the ear tufts, which makes their face appear rounder. Barred owls are the only member of the true owl family who has dark eyes in the eastern United States; all the other owl species have yellow eyes.

The flight of Barred owls is direct and heavy, with slow wingbeats and occasional long glides. Their calling voice is quite unique, with a vast range of calls. If you hear a rhythmic hoot, or a vocalization like “who cooks for you, who cooks for you all”, know that a Barred owl is close by. The voice of the females has a higher pitch than that of the males.

Both the males and females have the same plumage, with the females being larger in size than males. These birds are non-migratory and stay in North Carolina all year round.

Endemic to the Americas, the Great Horned owls are a large owl species belonging to the family of true owls. Due to the unique coloration and pattern on their body, these owls are also known as “tiger owls”.

It is believed that their brownish color acts as a camouflage for them in the woods. The head, upperparts, and wings are mottled brown, with dark markings all over them.

On their throat is a white patch that stands out. The skin of their feet and legs are black, with bills and talons colored in gunmetal grey.

Although they have named to be horned, they don’t really have horns. Instead, they have hair tufts that are positioned in such a way that they look like horns. These tufts are called “plumicorns”. It is still unknown why these owls have these plumicorns. They have rounded eyes with yellow iris and a dark cornea.

The Great Horned owls are highly adaptive birds and can thus live in regions with different types of climates as well. They don’t mind humans much and can live in suburbia as well as densely wooded regions. The northern population of Great Horned Owls are migratory and travel during the winter season. However, the rest of them are quite content to live in temperate areas all year long.

The Great Horned owls are the heaviest owl species in North Carolina. Their body is somewhat shaped like a barrel, with a large head and broad wings. The legs, talons, and feet are large and powerful as well. They have a hard, black bill which, though long, appears to be shorter since half of it is covered with facial hair.

The hearing capabilities of these birds is remarkable. Studies show that they can hear ten times as well as any average human being. Their calling sound is “ho-ho-ho hoo hoo”, which is loud but low-pitched. It has four to five syllables and has several transliterations, one of them being “You still up? Me too”.

Other sounds they produce are “ank ank ank”, “erk erk”, a “meee-oww” that sounds very much like a mewing cat, a “ke-yah ke-yah” like a hawk, etc. 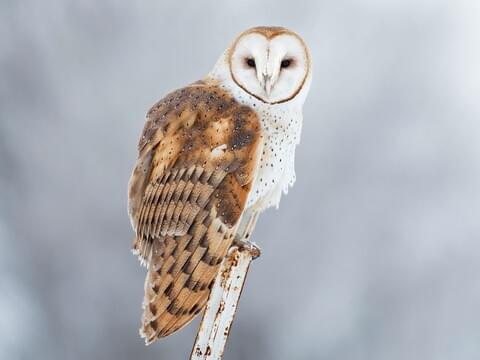 Out of all the birds found in the world, Barn owls are by far the most widespread. Although they do not belong to the family of true owls, they are a beauty to behold. Their body is paler than any other owl species found in North Carolina.

Their head and back vary between pale brown and shades of grey, with fine black and white speckles all over their body. The male Barn owls are seen to have lesser spotting than their female counterparts.

The face, that is shaped like a heart is often bright white with their ears placed irregularly; the right one is slightly below the eyes, while the left one is slightly above. It enables them to find the exact location of any sound.

Many people believe that Barn owls make a “hoot” sound. This, however, is not true. These birds produce a shrill shriek sounding somewhat like “shree”. It is a long, drawn-out shriek that could be painful to the human ears. The males use a shrill twitter to court their female partners.

When they are happy, they make a “kee-yak” sound, which resembles the sound of Tawny owls. When they feel threatened, these owls make a snake-like hiss sound in defense.

A remarkable feature of the Barn owls is their silent flight. Their wings make absolutely no noise while taking flight. This, coupled with their pale body, gives out an impression of a ghost. It is why people also call them “ghost owl”.

Barn owls live to live near water bodies for the benefit of having an abundance of food. They are known for nesting in church belfries, barns, tree holes, etc.

Their diet mainly consists of rodents, mice, voles, and rats in particular. However, if they cannot find rodents, they can also eat rabbits, insects, birds, reptiles, amphibians, and bats. You can find them in North Carolina in abundance. Belonging to the family of true owls, the Short-Eared owls are also referred to as “eared owls” because their ears resemble the ears of mammals closely.

These ear tufts are not always visible because of their facial hair. However, when these owls are in a defensive stance, they show their tufts. Their scientific name contains “flammeus”, which is given to them because of their flame-colored body.

The Short-Eared Owls are medium-sized owls with remarkably large eyes, short neck, big head, and broad wings. Their body is colored in tawny brown, with bars on their tails and wings.

Their upper breasts are significantly streaked. They have yellow-orange eyes with a black eye-ring, which gives them an impression of wearing mascara. The males and females look alike, except the females are larger than their male counterparts.

The wingbeats of the Short-Eared owls are somewhat irregular, due to which their flight becomes floppy. This is why these owls are known to bat or moth-like in flight.

They like to live in open terrains like marshes, prairies, and dunes. Rodents are their staple diet, in addition to other birds, fish, reptiles, and amphibians. They fly low while hunting, hovering for a while before approaching their prey.

The Northern Saw-Whet owls are one of the smaller members of the true owl family who are endemic to North America. They are, in fact, the smallest owls found in North Carolina. Although they are carnivore themselves, these small birds often end up becoming prey to larger raptors, including the larger species of owls.

In size, these birds are not much larger than an American Robin. Their body is covered with cream and brown streaks all over, with their face being considerably white.

They have yellow eyes and a dark bill that bends downwards. These birds also lack ear tufts, just like the Short-Eared owls. Their underparts are pale with fewer streaks.

The Northern Saw-Whet owls have a pigment called porphyrin in their flight feathers, which makes them appear neon pink when exposed to the ultraviolet light of the sun. They have a tooting whistle sound, which they usually make to find a mate.

In the eastern parts of North America, the Eastern Screech owls are a common sight. Although slightly larger than the Northern Saw-Whet owls, these owls are a small species of owls belonging to the family of true owls.

They are native to the wooded forests but have adapted well to the manmade environment in order to survive. They have two color variations: grey morph and rufous morph.

While they appear quite different, the two morphs have often been witnessed to mingle and mate. Strictly nocturnal in nature, these birds make a sound that is called tremolo when they venture out at night.

To sum it up, owl sightings are already a rare event for all the bird-watchers. In case you ever spot one, it would be disheartening if you couldn’t recognize them correctly. If you go through our article thoroughly, you will be able to identify every owl in your locality with ease.