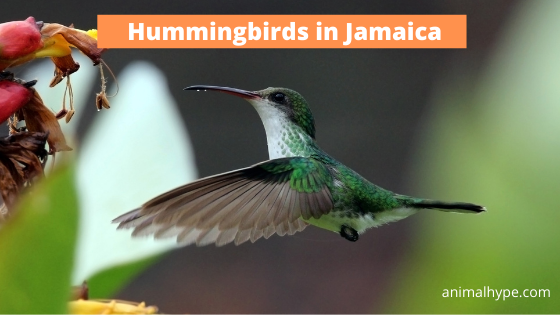 Although the island of Jamaica is not the largest island of the Caribbean, it is certainly the most beautiful island on the sea, with its richness of flora and fauna and the beauty of its serene beaches.

Did you know that there are 28 species of birds that are endemic to the island of Jamaica? The fact itself is evidence of the richness of the avian fauna of Jamaica. As far as Hummingbirds are concerned, 6 different species inhabit the island, out of which 3 are endemic, while the remaining can be found here in specific seasons.

In this article, we will take a look at these 6 Hummingbirds species you can find in Jamaica and help you in identifying and differentiating between them.

Endemic to the island of Jamaica, the Red-billed Streamertails are gorgeous birds that are found both along the coastline as well as in the mountains of the island. These birds heavily populate the western parts of Jamaica, but are rarely seen in the eastern parts, which is why they are also known as the “Western streamertail”.

Other names given to them are “Scissor tails”, “God birds”, and “Longtail hummingbirds”. The Red-billed Streamertails are also the national bird of Jamaica.

Although you can find the Red-billed Streamertails almost everywhere in western Jamaica, they are most abundantly found in the thick forests of the island. These birds are non-migratory and spend their whole lives on the island.

The bills of the Red-billed Streamertails are their most remarkable feature. They are long and slender, curving downwards slightly with a black tip at the edge. While both sexes have a long tail, the male’s tail is longer and is believed to be the longest tail among all the hummingbird species. These birds are sexually dimorphic.

The males have a black head and neck with a glossy sheen on it. Their underparts are bright emerald green, with black wings and tail edged in green. Their tail feathers are slightly elongated to form streamers that are crossed like a doctor’s coat tail, thus, they are named “Doctorbirds”.

The females, on the other hand, have a greyish-brown head, a green breast, and white underparts edged with green. They lack the streamer tail of their male counterparts and instead have rounded tails tipped with white.

The Red-billed Streamertails have a loud, sharp, and high-pitched calling sound “teet-teet” or “tee tee tee”. Another sound they make is metallic and go like “ting ting” or “chink chink”. You can easily attract these birds to your backyard, either by planting flowers that contain nectar in your garden or adding sugary water in your backyard bird-feeder. 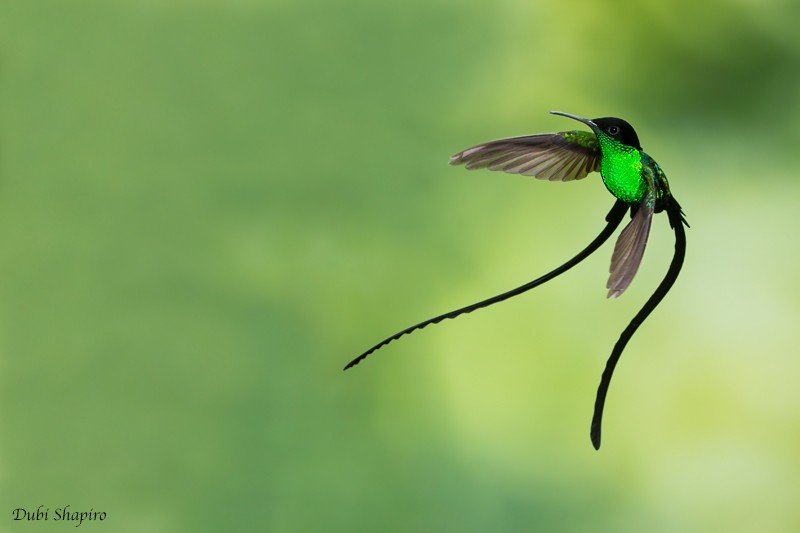 The Black-billed Streamertails are a species of hummingbird endemic to Jamaica who is found exclusively in the eastern part of the island.

Due to the similarities between these and the Red-billed Streamertails, many bird experts consider them to be a subspecies of the latter. However, there are some undeniable behavioral differences between the two, which have led the authorities to treat them as two separate species.

For populating western Jamaica, the Black-billed Streamertails are referred to as the “Western streamertails”. These birds are sexually dimorphic, with the males being somewhat similar to the male Red-billed Streamertails, with the exception of a bill that is completely black. They are also slightly smaller in size than their red-billed cousin.

The female Black-billed Streamertails have a pale green neck, crown, and back. They have dark brown wings, light brown lores, and a black tail with white-tipped edges. Their lower mandible is pinkish-brown with a dark brown upper-mandible. The lower parts of their underbody are white in color. The females don’t have the long streamer tails that the males possess.

The Black-billed Streamertails are attracted to brightly colored flowers and use their stretchable tongue to draw nectar from them. Their bills that are slightly decurved at the edge help them in this endeavor. These birds are so quick with their tongues that they can suck the nectar up to 13 times in a single second. They often approach the local backyard feeders looking for food.

However, because of their surprisingly fast movements, it is likely that you won’t even know of their visit to your feeder. When they find nectar, the Black-billed Streamertails are also known to feed on spiders and other small insects. 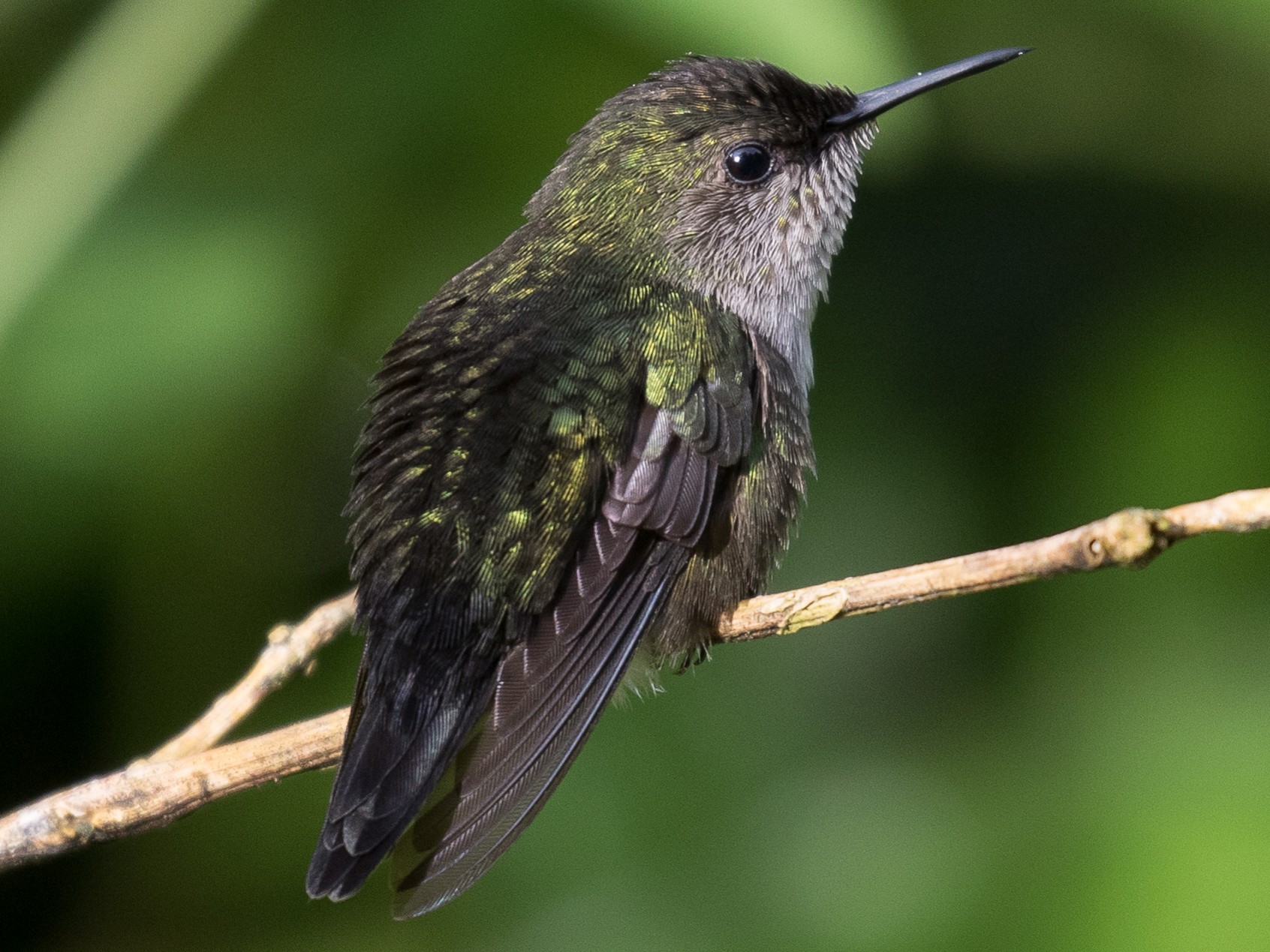 These hummingbirds are non-migratory in nature and can be found on the islands of Jamaica, Hispaniola, Saona, Gonve, Tortue, Cayman, Catalina, and Ile-a-vache islands. They also visit the western part of Puerto Rico as vagrants occasionally.

Although the Vervain Hummingbirds prefer to inhabit high-altitude regions, they can be found in gardens, evergreen forests, desert areas, shrubs and scrubs, and even in suburbs and other human-inhabited areas. The only region you can’t find them is the montane forests.

The best way of distinguishing them from the other Hummingbirds of Jamaica is to notice their size; you should simply look for the smallest hummingbirds you can find.

Because of their small size, many birders often confuse the Vervain Hummingbirds with Bumblebees or Hawkmoths. They have dark brown eyes and a dull black bill, with a few differences between both sexes. The males have a dark tail that is slightly forked towards the end, while the females have a rounded tail, and their outer flight feathers are tipped with white.

The plumage of the males is a dull metallic green with a dark rump, whereas the females have a bronze or bluish-green plumage with glossy metallic green sides.

The Vervain Hummingbirds are highly vocal birds, the males more so than their female counterparts. You can hear their prolonged twitter throughout the day. When they are upset, they produce a dry, chittering sound. While singing, these birds have a tendency of turning their head from side to side.

They will mostly sing when they are perched, and not when they are in flight. They feed on nectars from smaller, lower-yielding flowers than the larger hummingbirds, such as the Ruby-throated Hummingbirds or the Streamertails. 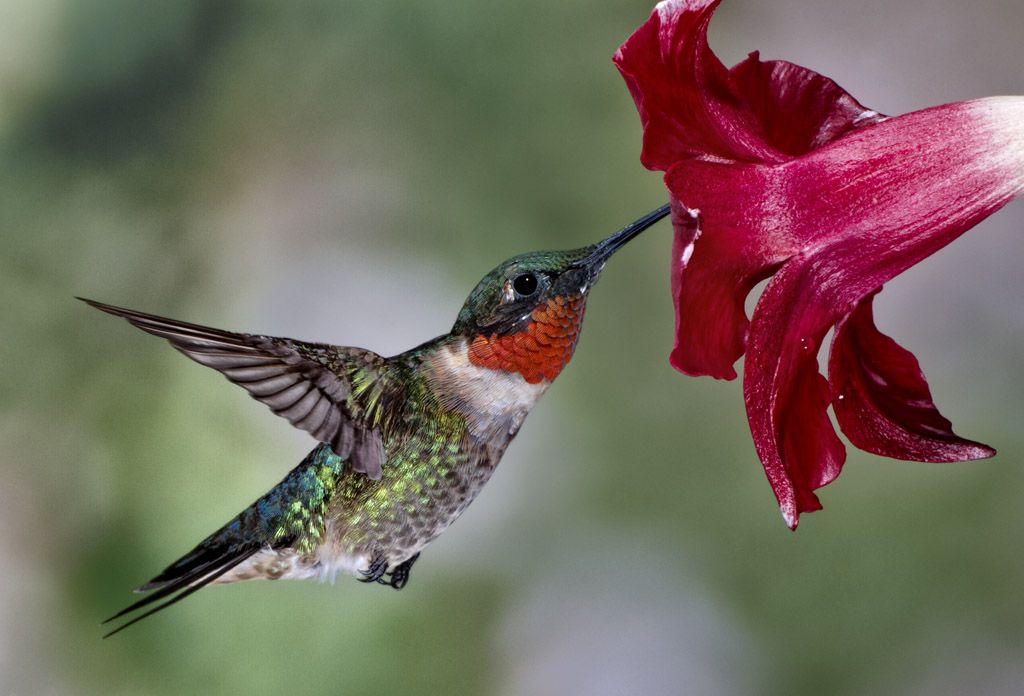 They have a reversed sexual dimorphism, wherein the females are slightly larger in size than their male counterparts. The males have a metallic green head with greyish-white underparts. Both their wings and bill are dark, with a fork-shaped tail that has a violet sheen.

On the other hand, the females have a white body that is covered with dusky streaks. Their feathers have green, black, and white in them with a notched tail. Females have slightly longer bills than that of males. The juvenile Ruby-throated Hummingbirds appear like the females in the beginning.

The Ruby-throated Hummingbirds are known for their flight skills and can flap their wings about 53 times in a single second. Although they prefer to inhabit woodland areas, they are also found in gardens full of flowering plants. These birds eat twice the weight of their body every day in order to have the energy for their day-to-day activities.

The Ruby-throated Hummingbirds are solitary birds who prefer to live with themselves at all times except the breeding seasons.

They are very possessive of their territory and lash out or get defensive if another hummingbird encroaches their boundaries. With a light body and wings shaped like blades, these birds are agile fliers and are often invisible due to their speed. 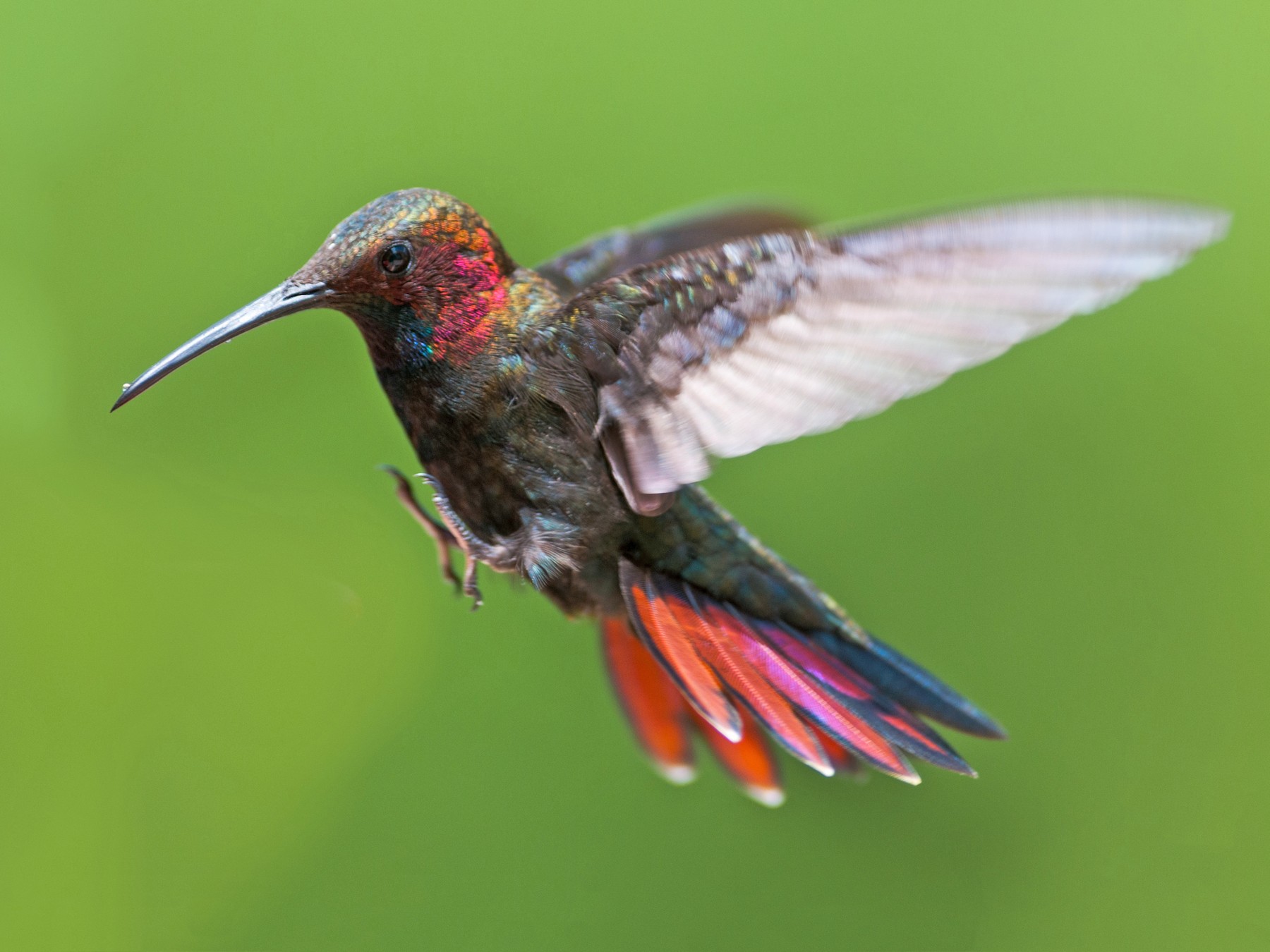 The Jamaican Mangos are members of the Hummingbird family who are also endemic to the island of Jamaica. In Jamaica, these birds can be commonly found along the northern coast, where they inhabit the forest edges, open lowlands, and other man-made environments.

During the winter season, they migrate south to the John Crow and the Blue Mountains. Because of the dark appearance, these birds are also known as “Black Hummingbirds” or “Black Mangos”.

The Jamaican Mangos have an overall blackish body with iridescent magenta streaks on their cheeks that go down all the way to their neck. On their shoulder is an orangish-golden sheen, with blue, green, and blue streaks over most of their body. Their black bill is long and curved slightly downwards.

The main diet of the Jamaican Mangos is nectar from brightly-colored flowers of large trees, particularly Kapok, Ceiba, Inga, and Erythrina. They also approach the backyard feeders look for sugary water and flowering plants. Insects and small spiders are included in their diet for they provide them with the essential protein they need for breeding.

Being solitary birds, the Jamaican Mangos neither live nor migrate in flocks; they are always alone except during courtship and breeding. After the brief breeding season, they return to their solitary lifestyle. This is why you would never find a Jamaican Mango in pairs or groups. 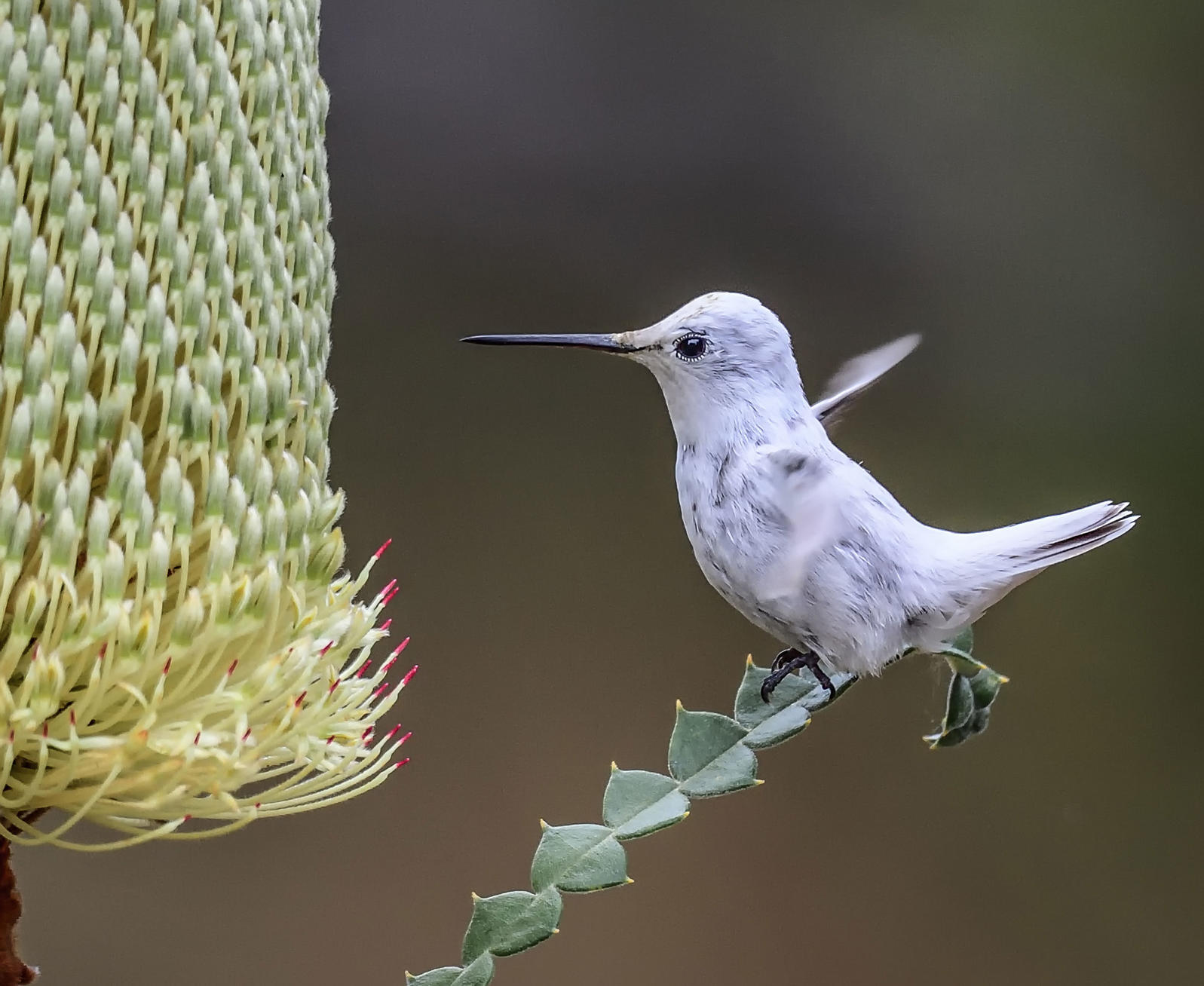 The Leucistic Hummingbirds are one of the most unusual hummingbirds in the world. These birds are about the size of common hummingbirds; only they have a stark white body.

The color of their body might vary from pure white, off-white, partially-white, tan, to grey. The other parts of their bodies, like their eyes, bill, feet, are black. The reason behind their white body is due to the complete lack of melanin, the pigment that causes coloration.

Although they appear different from the other hummingbirds, other traits in them are similar to the rest of the hummingbirds. They have the same diet, reside in the same areas, and have similar calling sounds.

The Leucistic Hummingbirds are still considered to be an under-studied species. Therefore, there is very little data about their habitat, lifestyle, or behavior. However, there have been enough sightings of these birds to ensure that they are found on the island Jamaica.

If you are a bird-watcher, Jamaica is the perfect definition of a “paradise island” for you. The diverse variety of birds found here can keep you enchanted for a lifetime. The hummingbirds of Jamaica, although small in size, are attractive as any larger bird, if not more. After all, there has to be a reason why the Jamaicans have made a hummingbird (Red-billed Streamertail) their national bird. The next time you find a hummingbird in Jamaica, make sure you can tell its name.