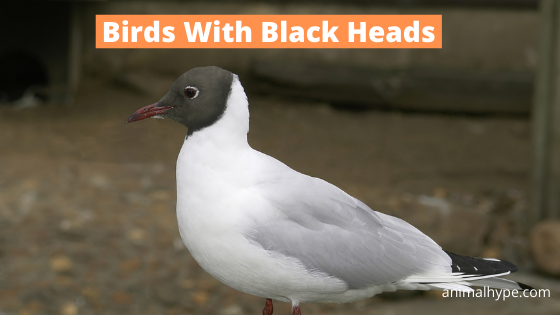 While white is considered to be the color of royalty among us, black has its own appeal. The same is true for birds. You might have come across several birds of all shapes, sizes, and families who happen to have black heads. In this article, we will attempt to make 23 such birds familiar to you. In North America, these birds are also called “Thin-billed Murre”. They have a black head, back, wings, and tail, with their underparts being white. Their black bill is long and thin. The Black Phoebes are black-and-white passerine birds who are a member of the tyrant flycatcher family. These small birds have a wholly black body, with the exception of white underparts and covert tails. They are fond of water and are, thus, always found around water bodies. 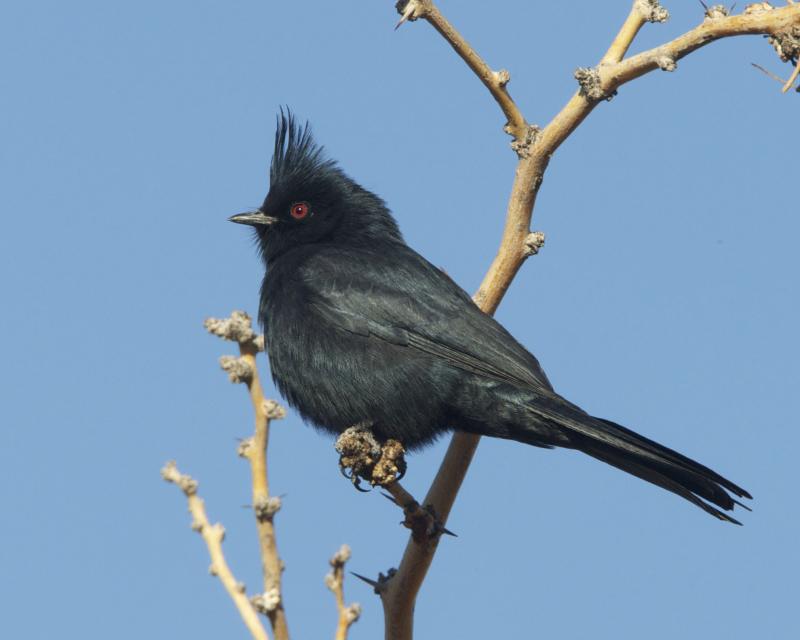 The Phainopeplas or Northern Phainopeplas are members of the family of the Silky Flycatchers. These birds can be found anywhere from central California to southern Utah.

They prefer to live in desert regions and are found in deserts in southern Nevada, Arizona, southern California. The males have a glossy black body with a crest and a long tail with a white wing patch. The females, on the other hand, have a paler grey body. 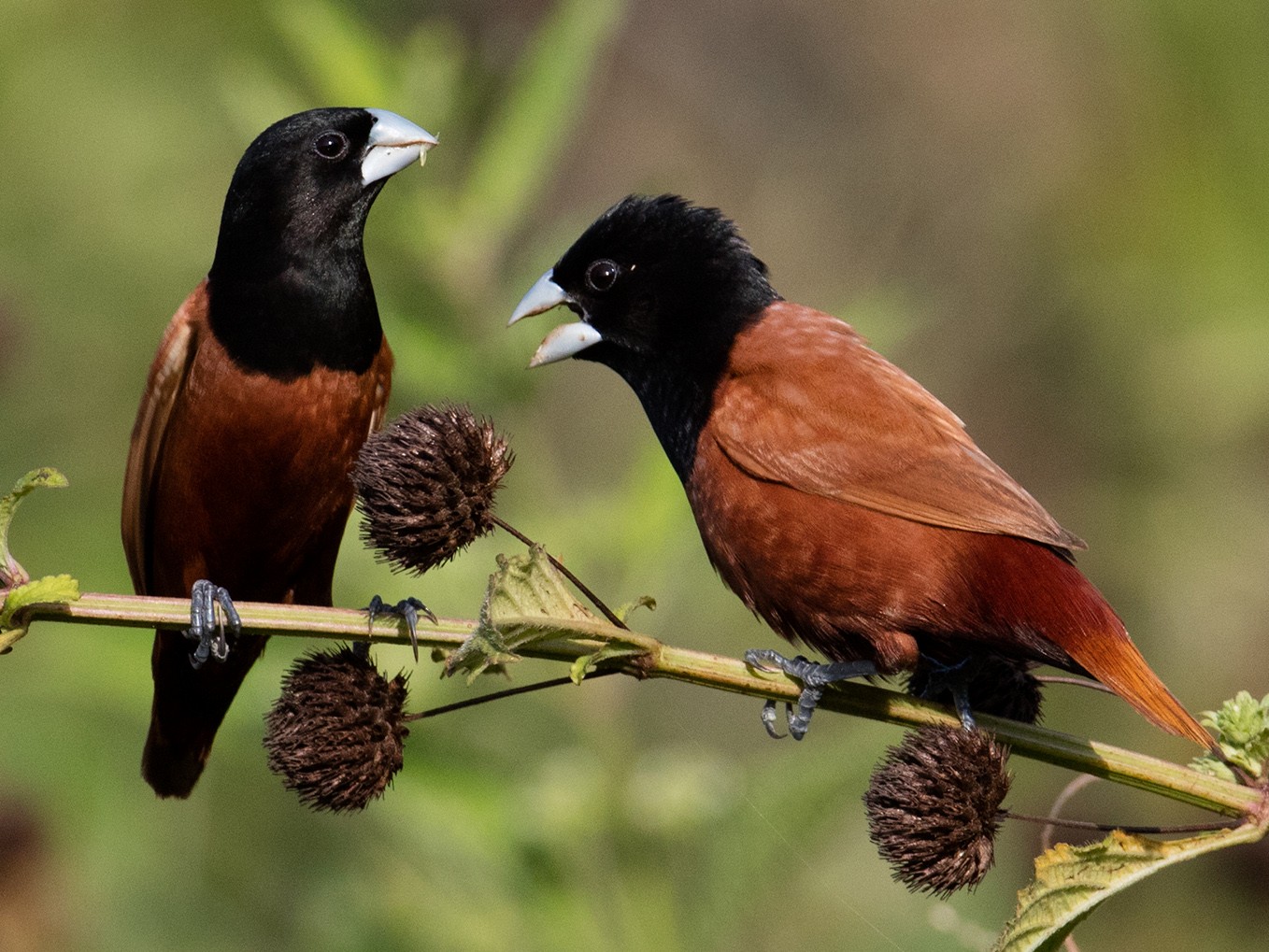 The Chestnut Munia is a small passerine bird who was the national bird of the Philippines before 1995. In the Philippines, they are known as “mayang pula” or “mayang simbahan”. They have a small brown body with a black head, and short, pale-blue bills. On their lower back is a prominent red patch. 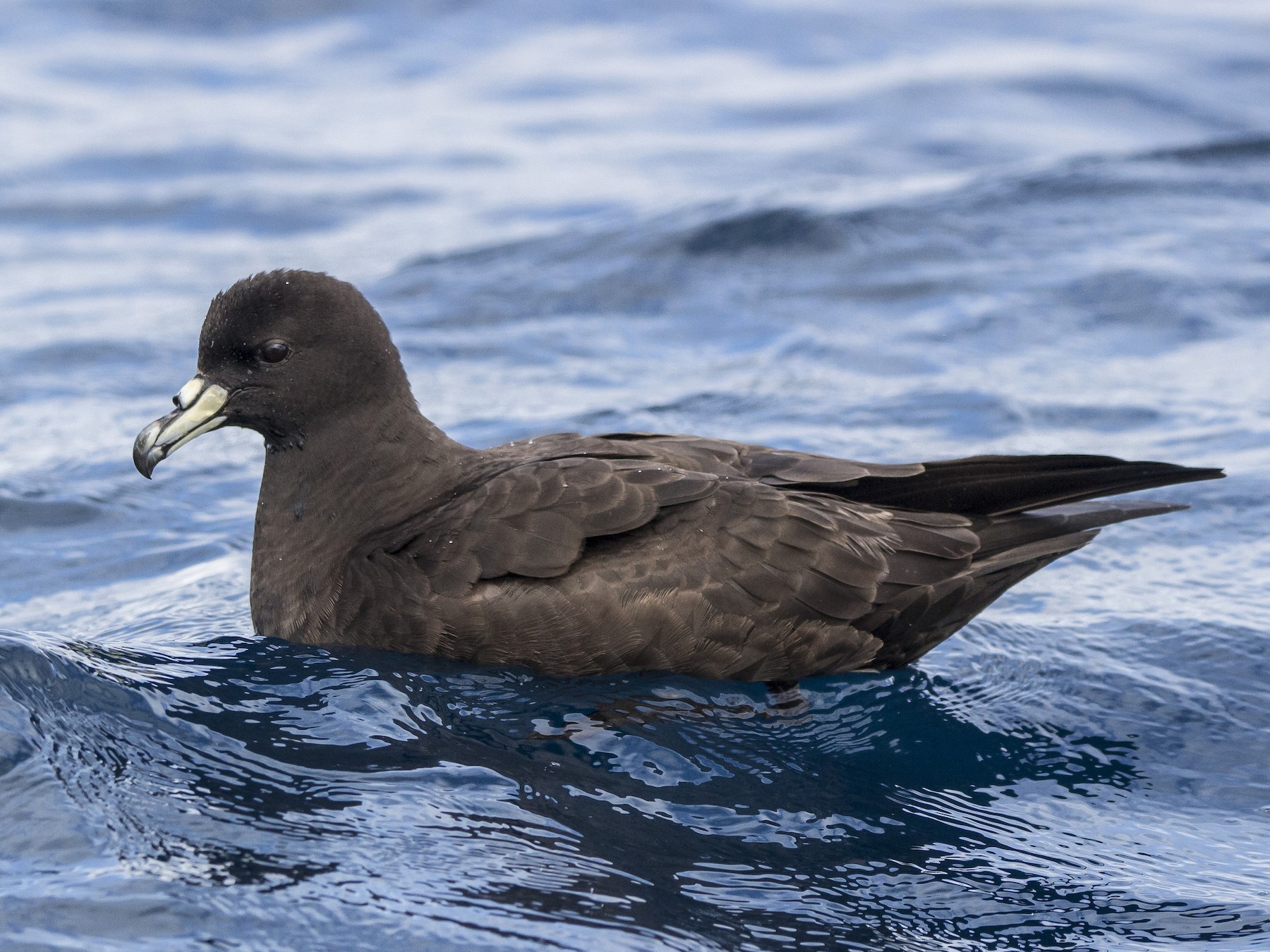 The Parkinson’s Petrels, also known as “Black petrels”, are medium-sized petrels that belong to the family of Procellaria. Of all the sea birds in the Procellaria family, these birds are the smallest.

They are native to New Zealand and are found all across the Northwest Nelson and on the South Island, as well as the North Island. They have an overall black body with a pale beak.

The Black Rails are small birds who belong to the family of Rails, who have an overall black body with white speckles all over their wings and flanks.

Their beaks and legs are black as well. They are found in the Caribbean, North and South Americas, and mostly inhabit salt marshes. In many states, the population of their species is considered to be threatened, even extinct. 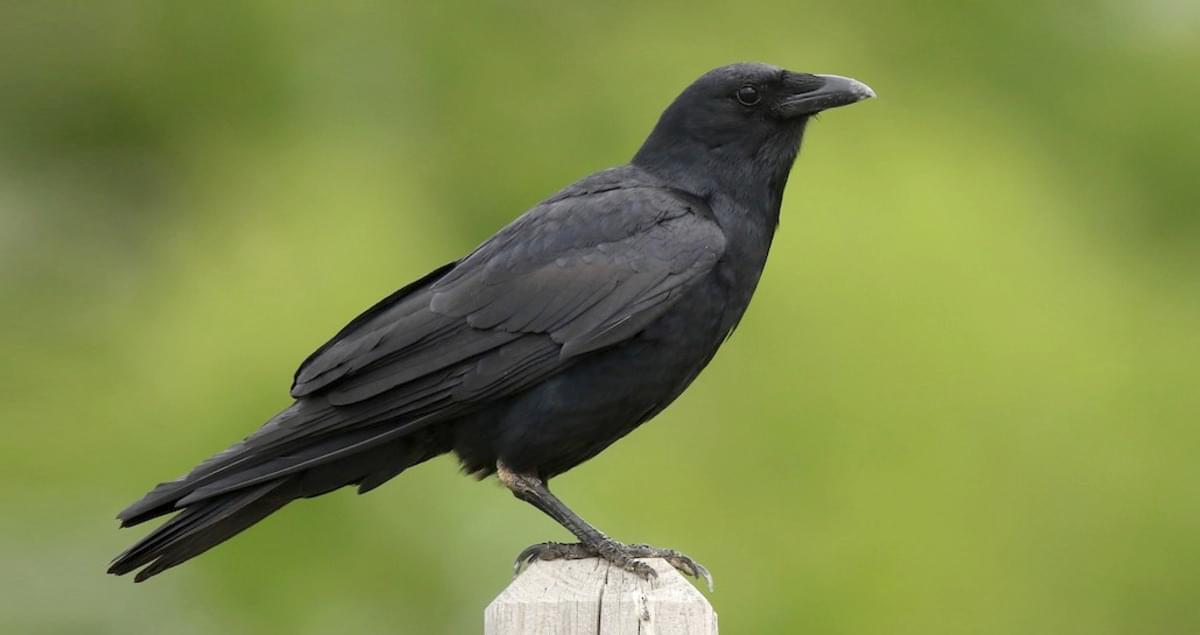 Discovered by the Scottish ornithologist and naturalist, Alexander Wilson, the Fish Crows are birds who inhabit the wetlands. These medium-sized birds are found across the southeastern United States.

In appearance, they are similar to the American Crows but are smaller in size. Their bodies are covered with a glossy black color, with a bluish sheen to the wings and greenish sheen to the underparts.

The males have an overall black body with a purple sheen on the head and bright yellow eyes, while the females have a dull brown body with dark brown eyes.

They prefer to live closer to water bodies and are found in central and western North America. Named by Darius N. Couch in honor of the American military Commander, Winfield Scott, the Scott’s Orioles are the members of the family of Icterids or New World Blackbirds.

These medium-sized birds are found in parts of the southwestern United States. They have a black head, neck, and wings, with yellow underparts. Their wings have white bars on them.

Found on the Asian subcontinent, the Black-headed Ibis is a large member of the ibis family. They are also popularly called by the names of “oriental white ibis” or “India white ibis”. They have a black head, neck, beaks, and legs, with white plumage and lower body. The tails of the adults are grey in color and are strictly ornamental. 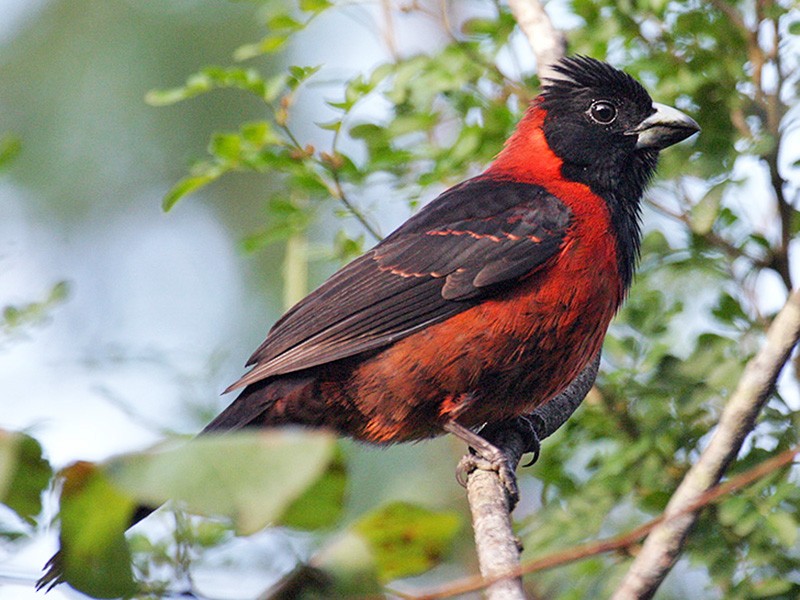 The Crimson-collared Grosbeaks are small birds who belong to the family of cardinals endemic to North America. They are found in north-eastern Mexico, central Tamaulipas, northern Veracruz, but travel to southern Texas and the Rio Grande Valley during winters.

The males have a black head and plumage with crimson collar, neck, and upperparts. The females appear similar to the males, but their underparts are greenish-yellow. 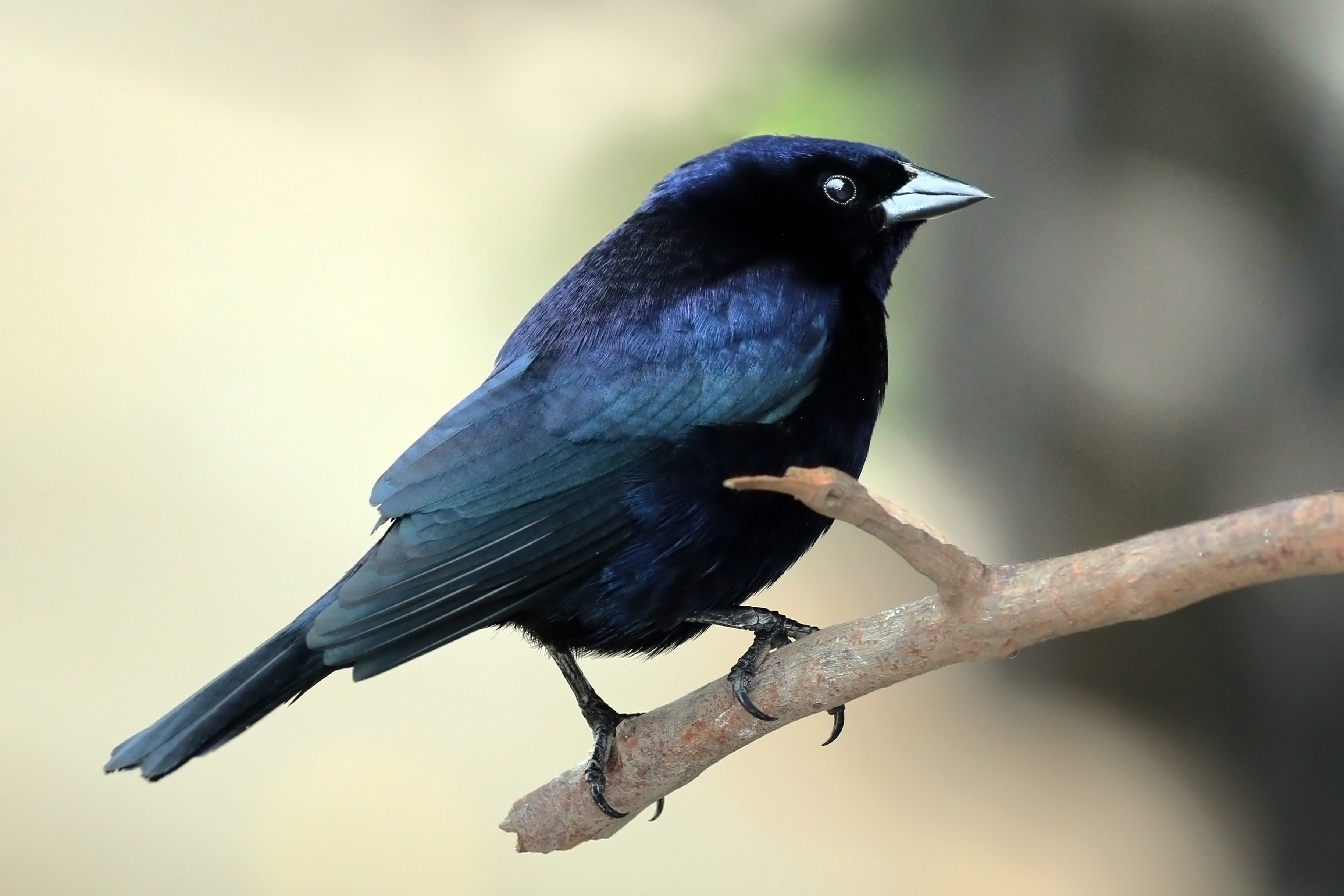 The Shiny Cowbirds are small passerine birds belonging to the family of the New World Blackbirds. They breed all over South America and are found in the low-altitude regions. The males are larger than females and are overall black with a bluish iridescence. The females have a duller brown plumage. 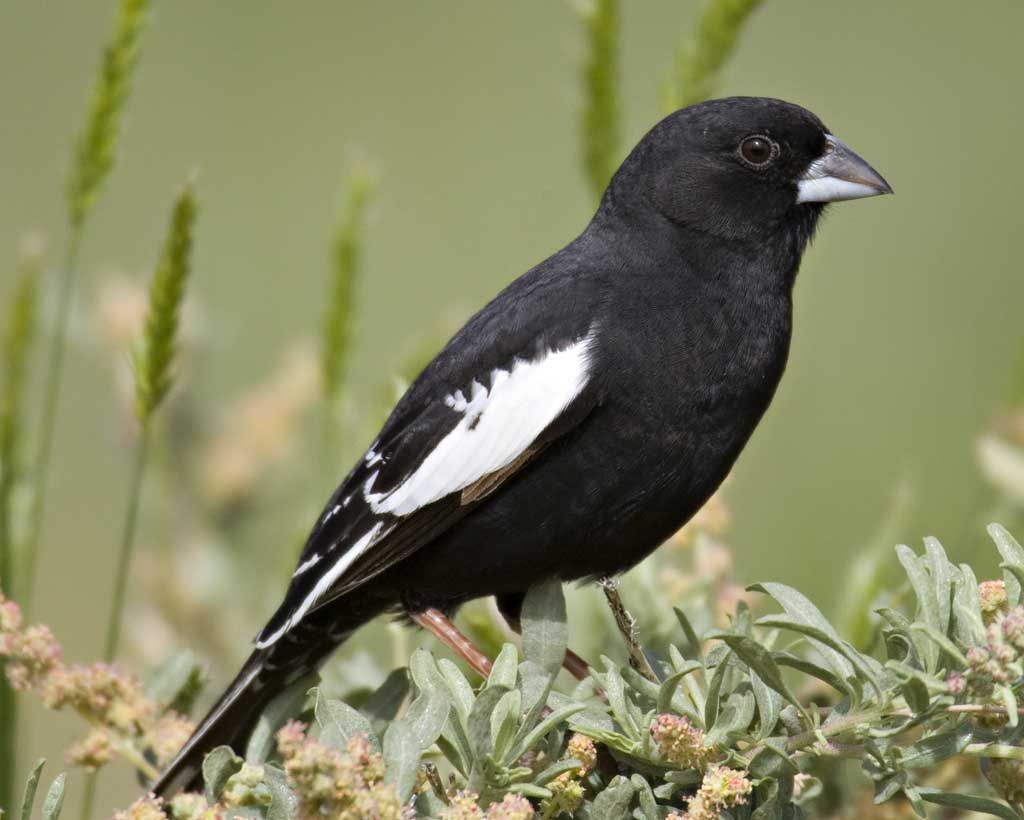 Endemic to central and western North America, the Lark Buntings are American sparrows who have been declared the state bird of Colorado. Their species was first discovered in 1837 by the American naturalist, John Kirk Townsend. 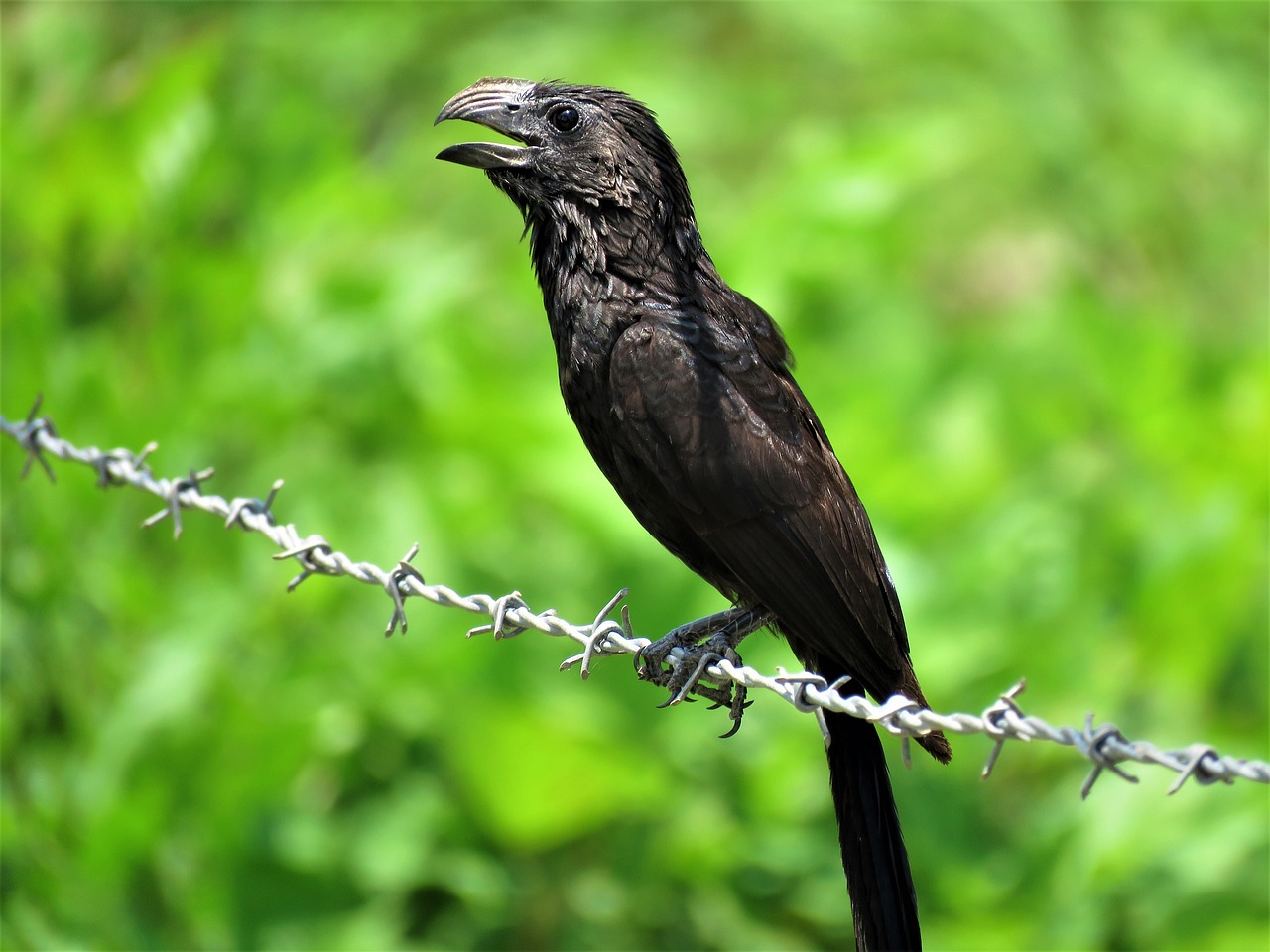 The Groove-billed Ani is a small tropical bird belonging to the family of cuckoos. They have a long tail, and short, curved bills. They range all over Texas, Mexico, Bahamas, Peru, Ecuador, and Venezuela, and inhabit savannahs, pastures, and orchards. They are completely black in color, with their tails as long as the rest of their bodies. 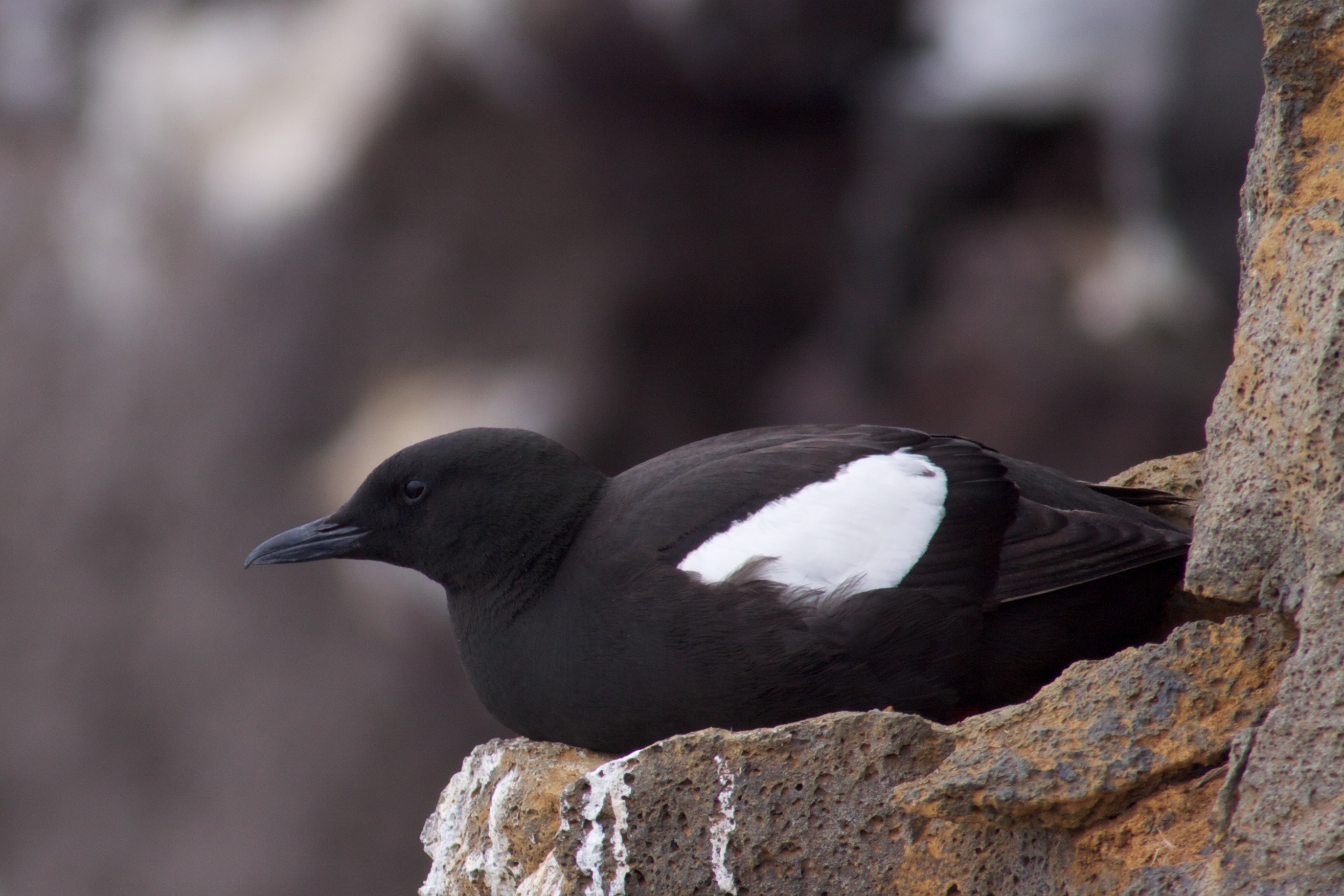 The Black Guillemots are medium-sized sea birds who are the members of the alcid family. Native to eastern North American coasts, they live on cliffs, islands, and rocky shores. They have an overall black body with a large white patch on their upper wings. The Black-headed Grosbeaks are members of the cardinal family who prefer to inhabit deciduous forests. They are about the same size as the common starling and have a tawny orange breast with dull yellow underparts. Their heads, wings, and tails are black in color with several white patches all over them. 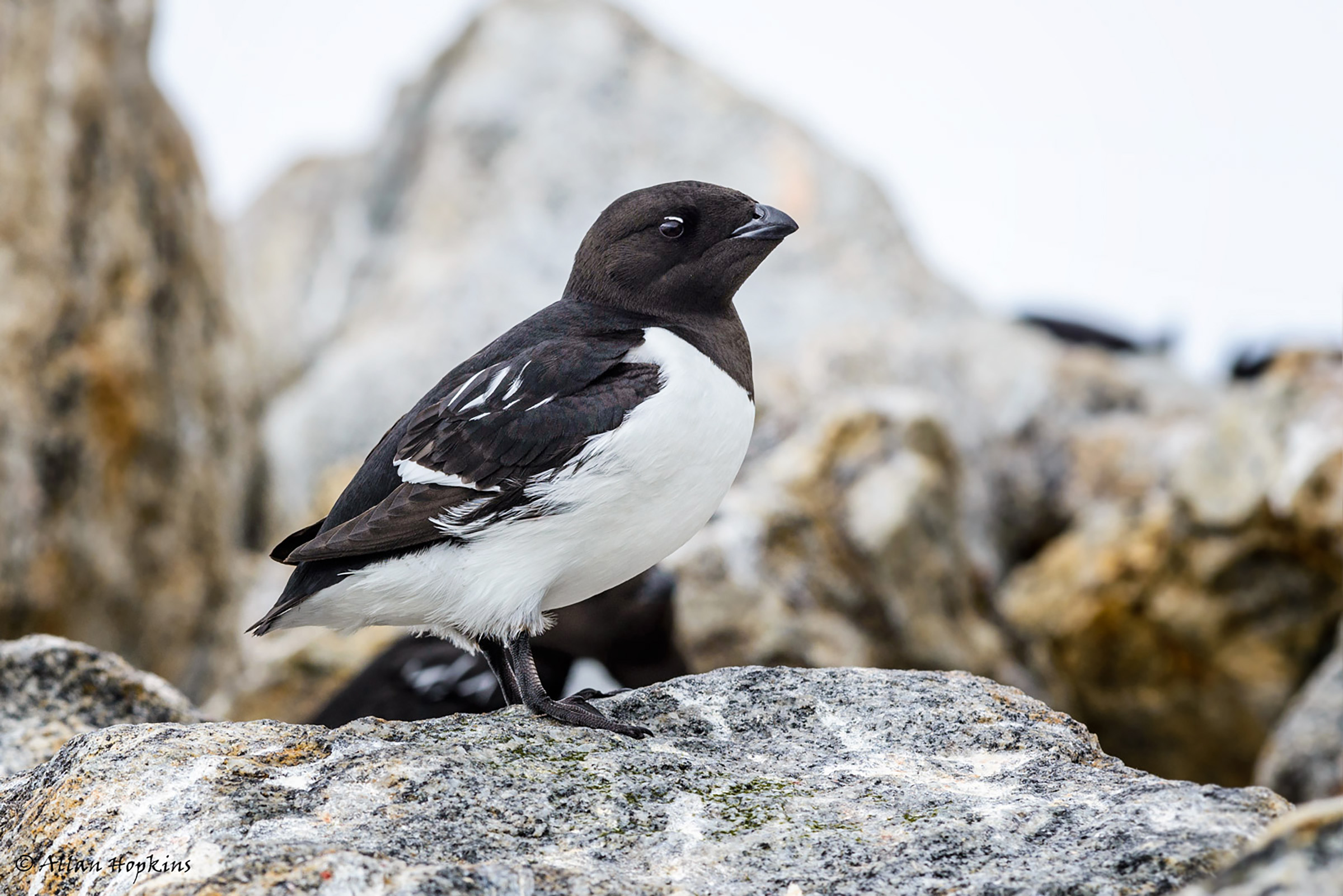 The Dovekies are popularly known as “Little Auk” in some regions and are one of the smallest members of the alcid family. Much like penguins, these birds have black head, neck, back, and wings, with white underparts. Their bills, which are short and stubby, are also black. They are highly social birds who breed in large colonies. 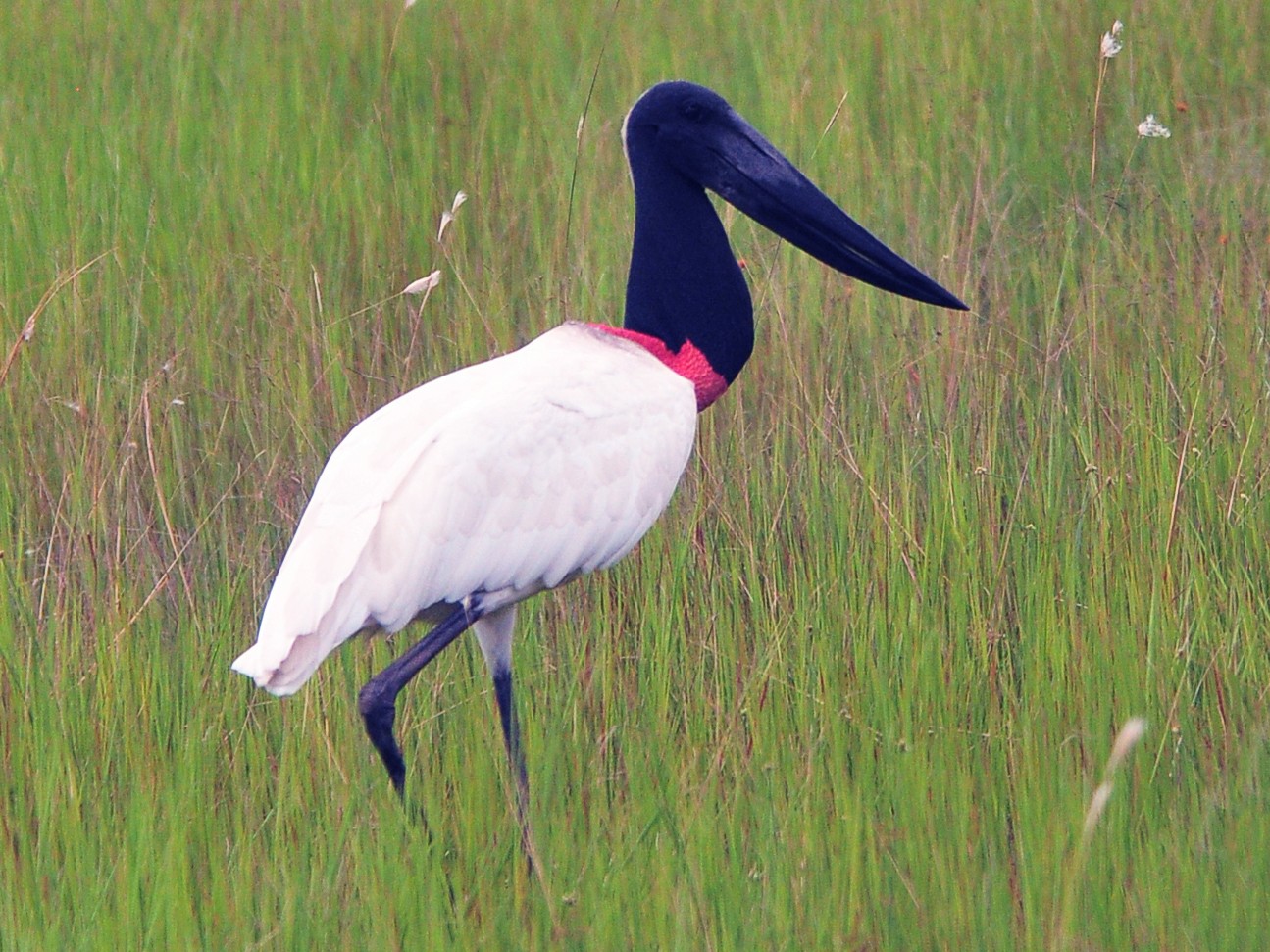 Belonging to the family of storks, Jabirus are found all over the Americas except for the West of the Andes mountains. They are not local in the United States but are occasionally found in the country.

The male Jabirus are about 25% larger than their female counterparts. They have a white body and plumage with a black head, neck, and a long, black beak. They have the second-largest wingspan in the continent, after Andean Condor. 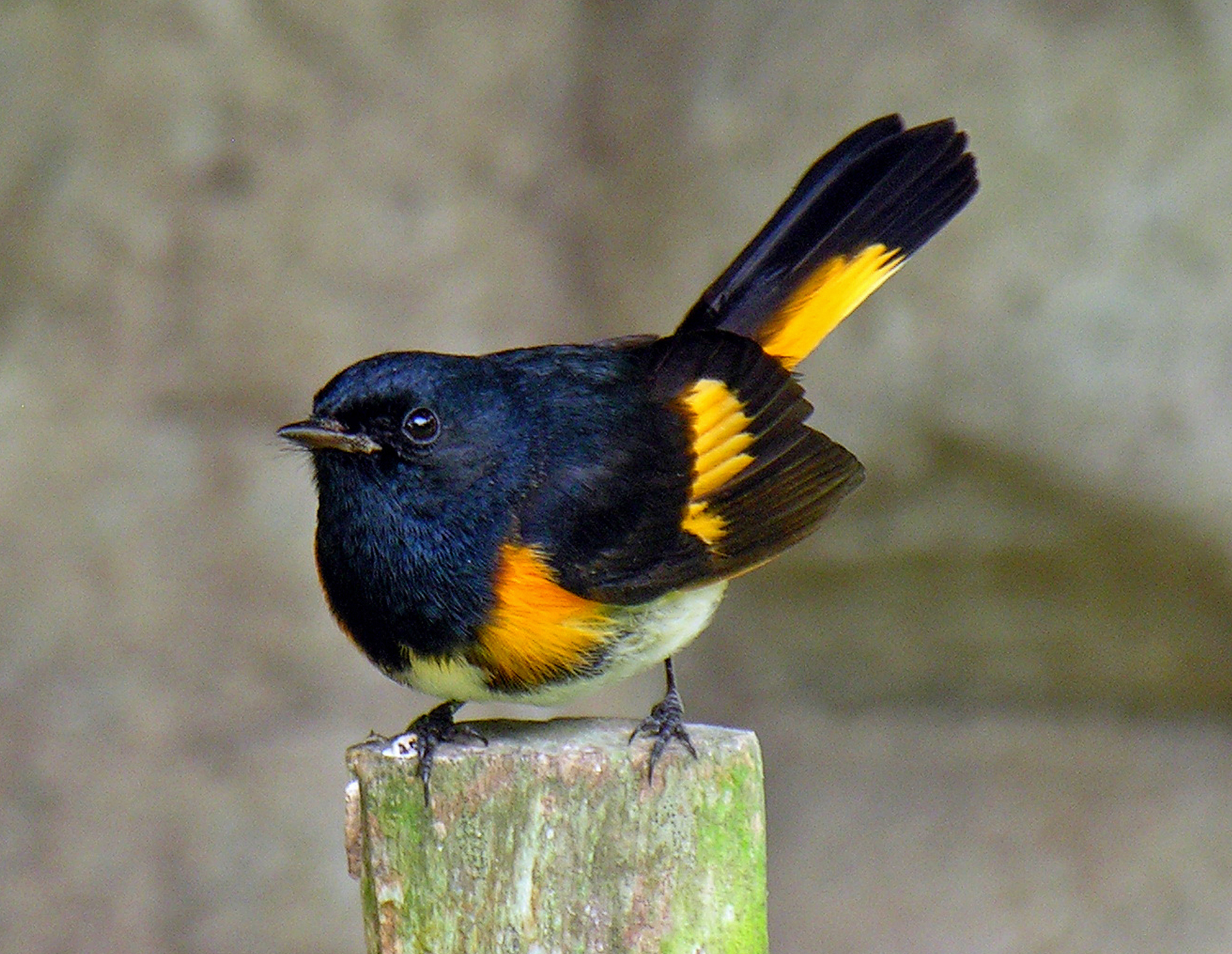 The American Redstarts are small birds who belong to the family of New World Warblers. They have a jet-black head and neck, with white underparts and orangish patches on sides. You can find these migratory birds throughout the United States. 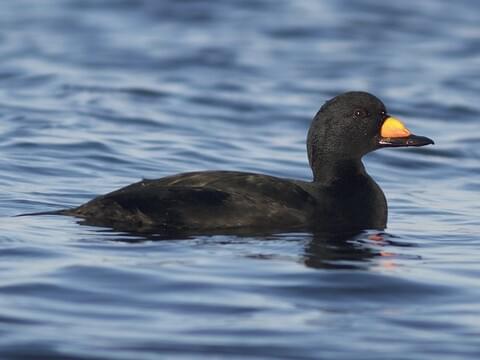 Popularly known as American Scoters, the Black Scoters are large sea ducks who are known for their large beaks and bulky body. The males have an overall black body with a yellow bill, while the females have a dull brown body. 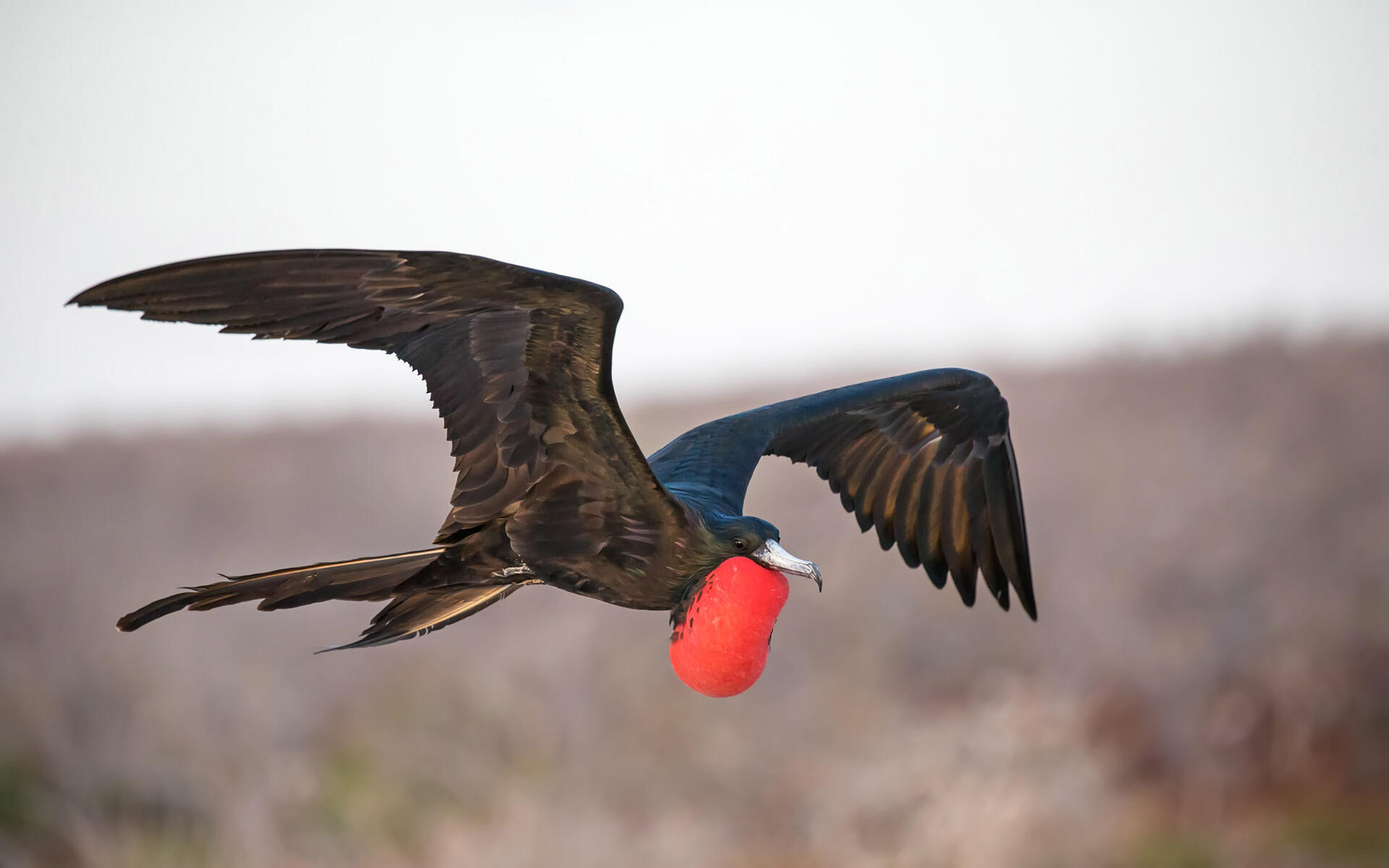 The Magnificent Frigatebirds are the largest members of the frigatebirds. These birds occur over tropical and subtropical waters. The males have a large black body with an inflated scarlet-colored throat pouch that resembles a balloon in the breeding season, whereas the females have a white breast with a black body. 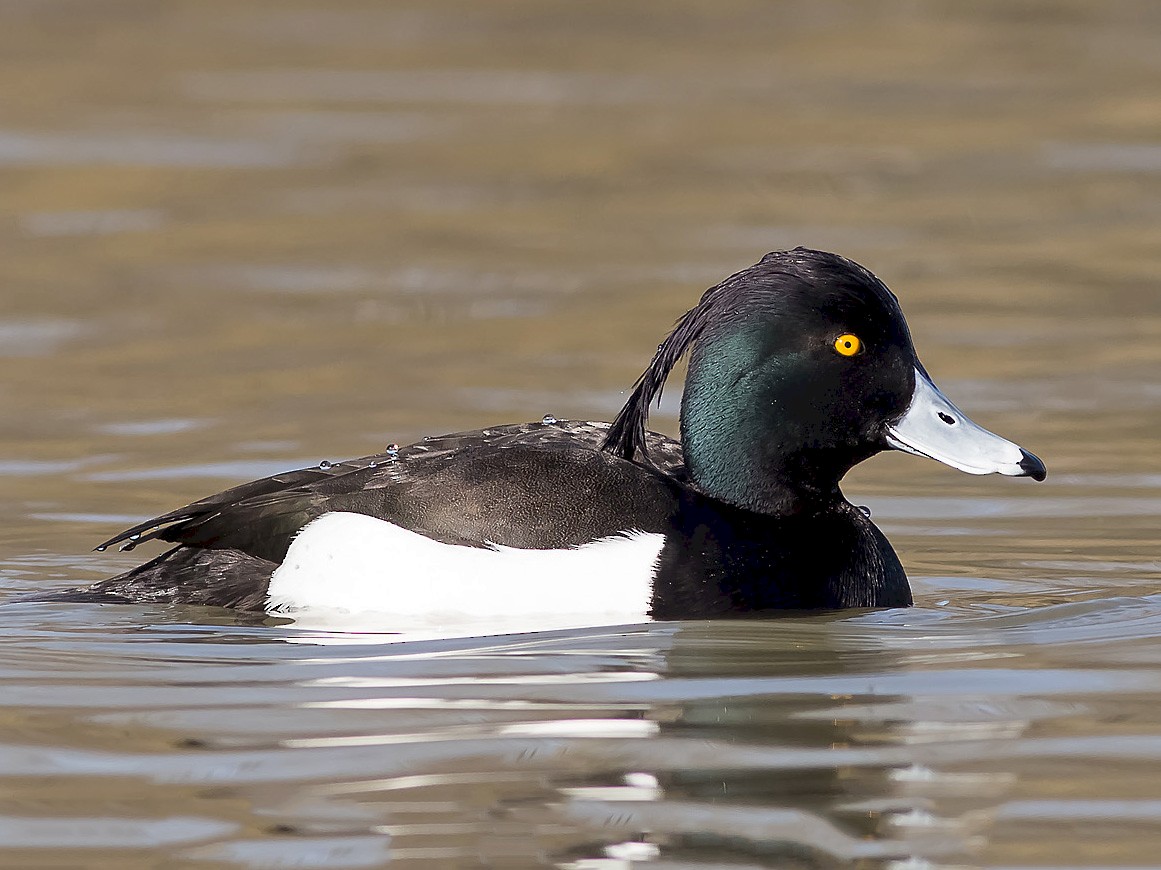 The Tufted Ducks are small diving ducks found in northern Eurasia. They have an overall black body with white plumage and a thin black crest, golden-yellow eyes, and a bluish-grey bill. A resident of the temperate and northern Eurasia, they travel to the United States in the winters. 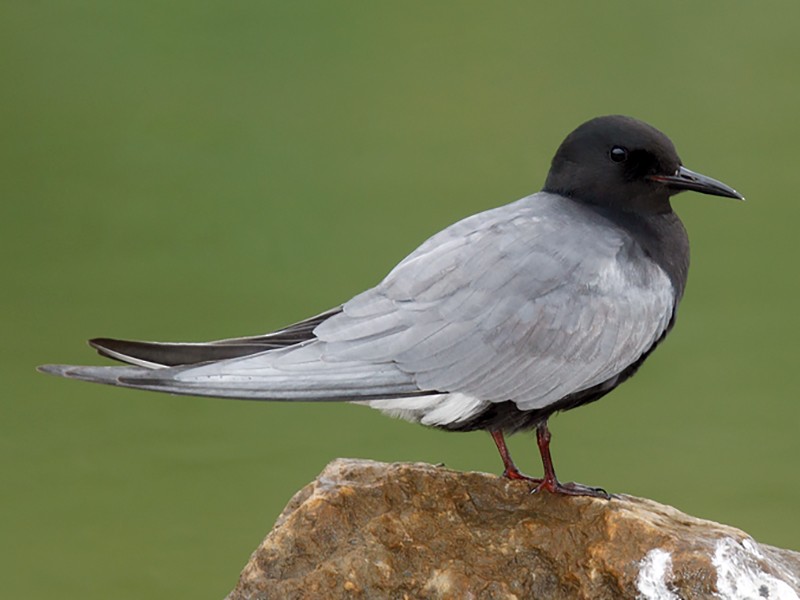 The Black Terns belong to the family of terns found in Western Asia, Europe, and North America. They have an overall grey body with short, dark legs, a seemingly fragile bill, with a darker, black head with tails turned upwards.

While some of the birds given in the list above have entirely black bodies, others have different colors on them, with their heads being black. In any case, these birds easily stand out of the crowd of birds due to their dark heads, which helps in recognizing them even from a fair distance.