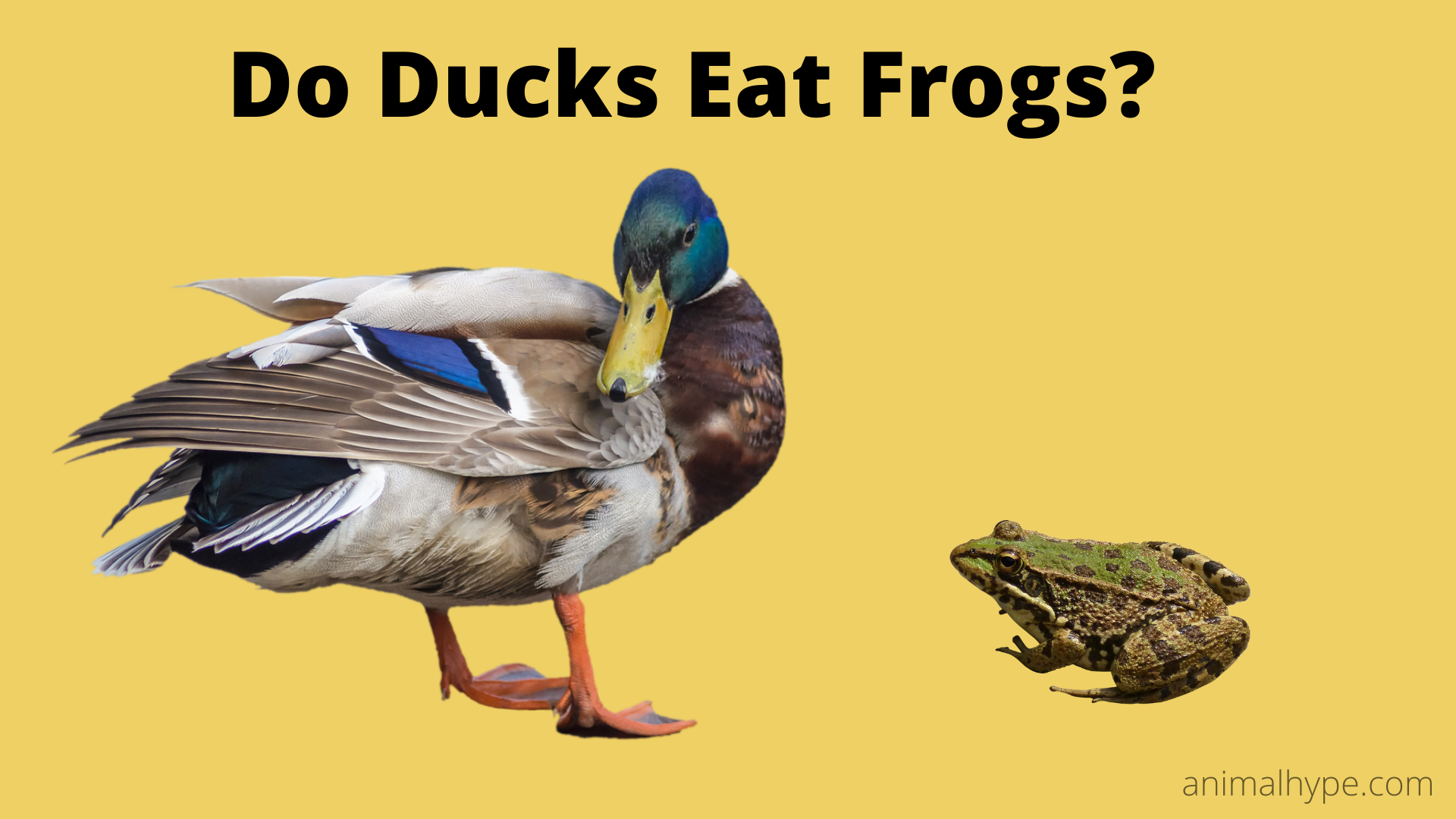 Fairytales of the Frog Prince and the Ugly duckling may be found in the same book, but do you know that they, in reality, are mortal enemies to each other? Both creatures of land and water aren’t the best of chums as we might think; rather, the revelation is quite the opposite. In this article, we’ll check out whether ducks eat frogs.

So, do ducks eat frogs? Yes, ducks do eat frogs and tadpoles when there is a shortage of fodder. Since ducks are omnivorous, many species of ducks often eat small sized frogs. Ducks and geese are known to be higher up in the food chain than frogs and toads. Mallard ducks especially are known for their frog-hunting capabilities.

As we might know, ducks are quite adaptive and innocuous in their survival. They aren’t picky when it comes to food!

Do Ducks Eat Frogs and Toads? 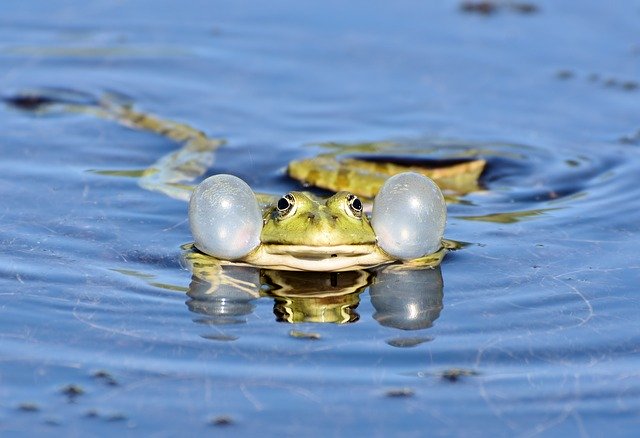 Female and Male Mallard ducks have a strong appetite for frogs and toads. During the nesting season, these birds look for meaty foods to sustain their lives.

Researchers have seen that female mallards hunt the amphibians while males are more focused on stealing them from the female. Even the Black duck’s diet relies more on toads than on the vegetation. 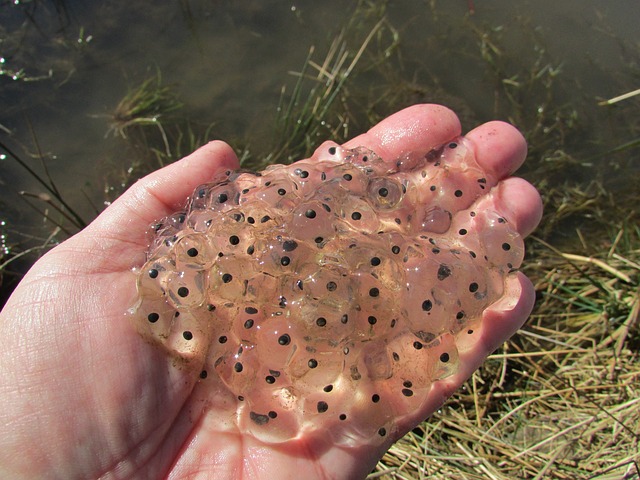 Studying the Frog lifecycle, we can see that frogs lay a large no. of eggs, but only a few reach the full gestation period and hatches into tadpoles and even fewer into frogs. The reason for this is that frog eggs make for a portion of duck food.

Since most frogs are quite large in size, ducks cannot eat them without choking to death. Therefore, they go for tadpoles, which are inevitably smaller in size.

Tadpoles live mainly in the aquatic sources. These larval creatures metamorphose into frogs that can live in both land and water. It also makes it easier for the ducks to catch the tadpoles as they live mainly on the surface of the water. They do not have to scourge for tadpoles, which is one of the main issues of frog hunting.

The abundance of tadpoles in the water, especially when the food supply on the land is scarce, is a blessing for these birds. Moreover, during their migration, the flock of ducks will particularly land near water-bodies, which contain balanced biodiversity.

Ducks and Their Food Habits

The range of their diet and eating habit is vast and quite unpredictable. Usually, the observed pattern sees ducks pecking at small shrubs, weeds, and various other edible water plants.

Along with veggies, they are also known to eat small insects and pests such as cockroaches and insects.

Breadcrumbs might be the choicest food of Queen Elizabeth and Blair Waldorf for feeding their ducks, but when it comes to fending for themselves, the wild birds often resort to frogs and little insects.

Dire circumstances have even seen some Mallard Ducks preying on small birds. Accommodative to their survival, the geese turn to tadpoles and smaller frogs to curb their hunger.

Omnivorous in nature, ducks are always on the lookout for food or Foraging. The grazing of duck herds constitutes a significant amount of time for hoarding food. Mostly they stick to the vegetation only, but when they crave meat they go for frogs and other small animals. 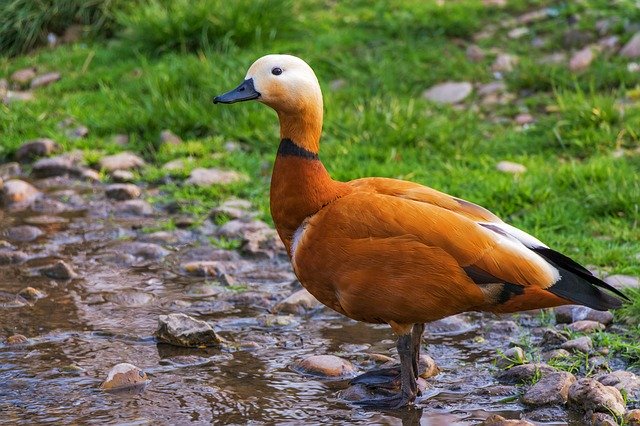 Like other predatory birds like eagles and kites, ducks are also the natural hunters for the amphibians. Though by several degrees lesser. It is only in rare situations where they would diverge from their usual food habit and hunt for frogs.

Here is a list of things that makes the cut for the duck’s menu and goes into the curious record of what ducks eat:

Duck Species and Classification of Food

Food choices vary in accordance with the type and living habitat of the duck. It seems some ducks are more vegan than the other, while others prefer a protein-rich diet.

These ducks do not descend from the Mallard variety and are exceptionally chosen for their pest controlling characteristics. Hailing from South America, Muscovies derive their name from eating mosquitoes.

From spiders to Japanese beetles, grubs, grasshoppers, mosquitoes, mosquito larva, slugs, snails, these ducks will have it all. Blueberry farmers of North America often resort to breeding these ducks in order to protect their farms.

Also known as SpoonBill, these ducks make for a favorite hunting game in Europe. Since their bill is broad on the tip and tapers down in dimension towards the end, they also have small teeth as a filtering component. Small plants, insects, and fish get stuck here.

This gives them an added advantage over other birds, and perhaps that is the reason why they have grown significantly in number over the past few decades.

The domestic variant mainly found and reared in the Indian subcontinent feasts on small insects and fishes mainly. They rarely go for larger prey like toads or salamanders.

Considered as most vicious of all, they often prey on frogs, tadpoles, toads, fishes, and eggs. Some research has also shown them to have an appetite for smaller birds. These ducks have homes in Central and South America.

Topographical changes incur migration of many various species of ducks as we know, be it Siberian or Waterfowl.

When the temperature drops or rises beyond normal, aridity arises in the habitat of these birds. It propels them to take flight in search of food. Avoiding the cold blizzard also ensures lesser life loss of the species.

Blue-wings migrate as soon as the autumnal equinox begins. That puts the timeline to September. Favorable wind direction also alludes to their migration. Mallards also take a flight to the south right after fall and The Pacific Flyway, and the San Francisco Bay is a treat for birdwatchers as most flocks pass through this area.

Range of Feeding for a particular species is also a pertinent factor in the survival and relocation of the Ducks. For instance, Comb Ducks prefer the dry land over the swamps, and thus their daily diet consists mainly of grains and seeds.

The Mandarin ducks of China, quite colorful in appearance, have an affinity towards water and pecks on smaller fishes and water insects.

Save Money and Make Duck Food

Some easy alternatives from grated carrot to chopped pears, apples, and grapes can easily make it to your duck’s meal without any harmful impacts. However, if you’re looking for a potent and wholesome alternative here’s a Vet approved recipe:

For the ingredients, all you will be needing is a quick trip to your pantry. Take out a cup of brown rice along with choicest veggies, two hardboiled eggs, and 2 tbsp of Wholemeal Flour.

And Voila! You’re ready with a healthy and cost-effective supplement to the breadcrumbs. These little balls are bombs of nutrition with carbohydrates, vitamins, protein, and minerals packed in one dough.

Duck Feeding is an activity that is widely encouraged for children to develop their social and emotional skills. However, it should be done under strict parental guidance as to the birds, and the children are both strangers to each other and volatile.

Breadcrumb feeding shouldn’t continue to the next generation. Instead, opt for bird seeds, which are by far a safer option ergonomically and health-wise. Throw them at a distance so that the child and the duck both feel safe.

Wild birds are usually kept in parks or zoos, and a stipulated time is fixed for visitors. This is done to protect both the birds and the humans as accidents, and violent attacks from birds aren’t that rare.

Be it frogs or breadcrumbs, the diet of a duck continues to be wild and unpredictable as their nature. So go ahead and take a royal feel in feeding the ducks right and healthy. And the next time you see a duck gobbling a tadpole, don’t curse the paddlers but honor nature as it is.