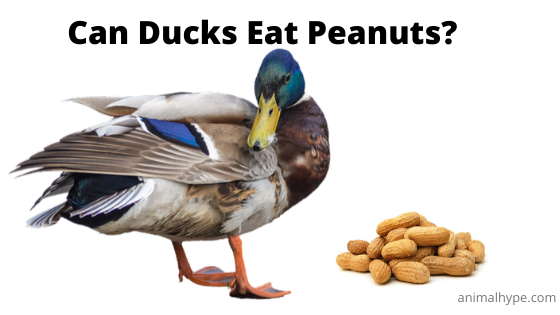 Ducks are the most common feathered pets you’d see around in the houses. They are no-fuss pets who eat almost anything and everything. They gobble up most of the things that you give them, but are they good for them? Let us find out.

Ducks shouldn’t be given anything that you are consuming. So, the question that arises in a lot of duck owners’ minds is, can ducks eat peanuts?

Yes, Ducks can eat peanuts but not as a whole. If you want to feed peanuts to your ducks you have to grind them first. Ducks find it really difficult to digest large nuts and seeds. Treats like peanuts can also get stuck in the duck’s crop as they just swallow their food as a whole. Peanuts are a good source of protein and carbs and should be fed to the ducks only after they are ground to a paste or very fine pieces.

Can Ducks eat all kinds of Peanuts?

Ducks throw absolutely no tantrums when it comes to eating. They love eating bugs, worms, grass, weeds, etc. Sometimes when you leave them in the garden, they can even eat flowers.

As mentioned above, peanuts can be fed to the ducks, but not all peanuts, even in the ground form, are good for the birds. Raw and salted peanuts are a complete NO and should be struck off the feeding list of the ducks.

Roasted and unsalted ones are the best options when looking out to feed peanuts to your feathered pets.

Raw peanuts are not recommended for the ducks because of an enzyme called trypsin, which is present in the raw peanuts and is said to be harmful to the health of ducks and chickens.

Peanuts, as treats, can be occasionally given to the pets as they are rich in fats and proteins.

Avoid giving too many peanuts as it can make your ducks obese, which is a common issue in poultry birds.

Yes, Ducks can eat peanuts along with their shell. But keep in mind that peanut shells offer absolutely no nutritional value to the duck’s diet. Hence, their consumption is useless. It only has dietary fiber, which the ducks get from the peanuts and other food items.

Peanut shells can also hamper the digestive process. So, it is advised not to feed peanut shells to the ducks.

How many Peanuts should you feed your duck?

Ducks have a simple yet very efficient digestive system. They swallow their food as a whole because they have no teeth to break the food into finer pieces.

Because the shell and the whole peanuts can get stuck in the duck’s crop, it is best to remove the shell first, grind the peanuts and then mix the paste or powder with the ducks feed.

You shouldn’t give your ducks more than two peanuts a day. They can be given as only treats and not as a full meal.

How do Ducks Digest Peanuts?

Once the peanuts and other food particles are swallowed, they pass through the toothless mouth of the ducks and goes into their esophagus. From the esophagus, the food is driven toward a little storage pouch, which is commonly called the crop.

The crop can hold the food for a good 12 hours. When the food is released from the crop, it makes its way to the duck’s stomach, where all the nutrients are separated from the food.

Now the gizzard takes over and grinds all the food along with the girt, using the muscle power.

From here, the nutrients are absorbed as the ground food passes by a long-tube, the small intestine. The food left after the nutrients from the peanuts and other duck feed is absorbed go to the cloaca. From here, it is expelled out.

Peanuts are legumes that are packed with high protein, fats, and dietary fiber. They basically originated from South America and are known by a variety of names like earthnuts, groundnuts, and goobers.

Peanuts are full of proteins. Out of the complete calories, 22 to 30% of the total calories are the protein content. Ducks and other poultry birds do not really require protein directly.

They require the amino acids that are actually available in the dietary proteins. When the duck consumes food high in protein, it breaks down the amino acids while digestion, and thus, these amino acids are absorbed by the duck’s body to make its own proteins that it uses to strengthen its feathers and muscles.

If the feed of the ducks contains very few proteins, then the bird can get protein-deficient, which can make it weak, and hence it may develop n number of infections.

With less protein in the duck’s body, they do not grow well, and their meat production also gets affected badly. The egg-laying process decreases or stops completely.

Peanuts have high-fat content, 44 to 56% of the total calories are poly and monosaturated fats. It is because of this fat content that peanuts should be fed in a rationed quantity to the ducks.

Too much fat in their diet can make them obese. Sometimes the oil is extracted from the peanuts, and then what is left is a high protein material that is fit to be mixed with the ducks feed.

Vitamins and Minerals in Peanuts

Peanuts are full of many types of vitamins and minerals. Some of them, namely are Biotin, Niacin, Thiamine, Copper, Vitamin E, Phosphorus, Magnesium, etc.

Mineral deficiency can lead to laying no shell eggs in ducks or softshell. This can get them to eat their own eggs, which is actually a major problem.

In the case of vitamin deficiencies, the ducks stop growing well and become weak. Their feathers are ruffled, and their movement is misbalanced. The bird can have chest problems and nose & eye discharges.

Peanuts are the richest source of dietary biotin. Biotin is important for ducks which they can get from peanuts. The deficiency of biotin can result in dermatitis of skin around the eyes and beak and the feet.

Skeletal deformities can also be seen in embryos and newly hatched ducklings if the mother is biotin deficient.

Niacin is also commonly known as Vitamin B3. The deficiency of it can lead to severe disorders of digestive organs and skin.

The first few symptoms seen in Ducks in the case of Niacin deficiency are retarded growth, loss of appetite, general weakness, and diarrhea. The deficiency also causes enlargement of the tibiotarsal joint and bowing of legs.

Thiamine is commonly known as Vitamin B1. It is a vitamin which when gets deficient in the duck’s body, results in Polyneuritis in the later stage. In the initial stage of the deficiency, the ducks can experience head tremors and lethargy. A decrease in appetite is observed in birds that are fed thiamine- deficient diet.

To get over all these deficiencies, ducks can be given small quantities of Peanuts in their diet.

Yes, Ducks can eat peanut butter but should be given only in a very small quantity. Peanut butter with fewer additives is okay for the ducks. Overall, it should be avoided if possible.

Many scientists conducted experiments on ducks. One of the experiments was to test whether the introduction of peanuts in the ducks’ diet can result in them laying heavier and larger eggs.

Once it was clear that peanuts do help in increasing the size and mass of the egg, scientists tried finding out the ideal amount of the peanut to be fed to the ducks.

This experiment proves that an ideal amount of peanuts in the ducks’ feed can make their eggs big and weigh more. This also can be useful to increase the quality of eggs and the production of healthier ducklings.

In addition to all of that, the peanuts provide a good amount of nutrition if introduced in the ducks’ feed.

Do all Ducks consume Peanuts?

Just like us, humans, ducks, other birds and animals have their own food preferences too. They might approach the food but would take a u-turn when they dislike what you keep in front of them.

Over time the owners get used to the food preferences of their pets. It is very much likely that some ducks might not even look at the peanuts when you toss them in their feed bowl, and other ducks might just love peanuts to the extent that they fight with their mates for them.