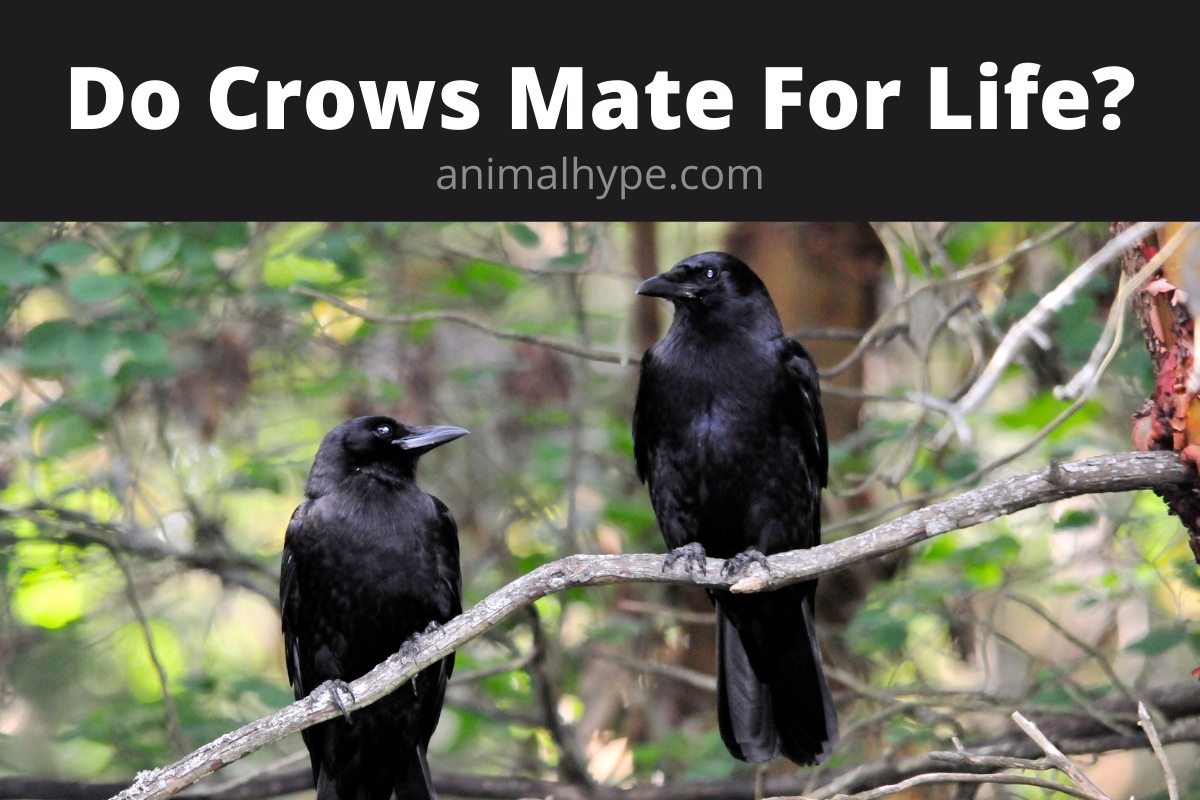 Crows are so widespread in every part of the world that it is often said that if a person knows only three birds, one of them will be a crow. Given their widely distributed population, you’d think that we would have thorough knowledge about their characteristics. But on the contrary, there is very little we actually know about these birds besides their appearance. Take their mating habits, for instance.

Crows are indeed monogamous and mate for life. Once a crow has found the perfect partner for themselves, they mate for life and spend this time raising their young together. The male will help feed, protect, and incubate the eggs for about two months which both parents share parental care. The crow couples mate every year for their entire lives until one dies or loses their ability to reproduce.

Crows choose a life-mate when they are adults. Then, they mate for life. They stick with this life-partner throughout the winter and summer seasons. If one dies, another crow immediately takes his or her place as a partner. Crows fall in love with one another through eye contact.

This article will learn everything about the mating habits of crows: their sexual maturity, courtship rituals, mating process, and more.

When do crows reach their sexual maturity?

Do you know how long crows live? Crows have an average lifespan of about 20 years. Although some of these have been seen to live as long as 28 years, it has only happened on rare occasion. As far as their sexual maturity is concerned, it differs in the males and females, just as with many other birds and animals.

Among crows, the females reach their sexual maturity considerably earlier than the males. While a male crow will mature sexually when they are five years old, females are sexually matured since they turn three.

Once crows reach their sexual maturity, they are known to mate every year in their breeding season for as long as they live. And in every single mating season, the females can lay about 3-9 eggs. Imagine having 9 babies every year for about 15 years! No wonder crows are so widespread.

How do crows mate?

Apart from their black appearance, if you had to mention one significant trait of the crows, what would you say? We’re sure more than half of you would mention their signature “caw.”

All of us associate cawing with these birds, but did you know that cawing is not the only sound they can produce?

Contrary to popular belief, crows have a quite complicate calling system and can produce up to 30 different sound combinations. While cawing is one of their simplest sounds, they produce the song while truly intriguing mating.

How do crows use their song to attract their mates?

Although most of you must already know this, most bird species have a typical tendency of wooing their prospective partners by singing to them. While crows use songs, their way of using them is a little different from the other birds.

Just like the other birds, the male crows are the ones that attract their female partners at the onset of their mating season. However, they don’t sing their courtship songs loudly for their partners from a distance as other male birds do.

Instead, their courtship song is surprisingly soft and rich, kind of like a mixture of cooing, soft rattles, bowing movements, slow growls, and ultimately, mutual nuzzling.

Doesn’t it sound pretty intimate and romantic? Well, it seems like there’s a lot we can learn from the crows.

The courtship rituals of crows

Although singing is the most significant courtship ritual performed by the male crows, many other rituals are a part of their courtship. These rituals are quite varied and can differ individually as well.

Before the process of mating begins, both genders display a variety of gestures to communicate their willingness to mate with their partners.

Some of the commonly seen behavioral patterns displayed by the males to attract the females can include showcasing their flight skills (making deep dives off cliffs as the female watches intently), giving dance performances, and bringing gifts (mostly food) for their partners.

If the female crow appears to be impressed by their feats, the males are encouraged and will attempt to rub their mouth and nose against those of their partners. If not resisted, they might even push their face into their partner, resulting in nuzzling.

Once the females are thoroughly impressed with the males, their dating (or mutual courtship) phase begins. In the next couple of days, the couple spends quality time together to know each other before mating better.

During this phase, you can find the crow couple taking joy flights together, soaring and tumbling, and even mimicking each other mid-air. They also lock their toes together in flight, which is believed to be symbolic of their affection towards each other.

The process of mating: Cloacal Kiss

As adorable as the mutual courtship between crows is, it doesn’t last long. Within a day or two of displaying their mutual attraction, crows are ready to mate.

While many bird-watchers believe that crows mate in flight, in reality, these birds always mate on the ground. The male crows do not have an external penis like humans, so their mating process is quite different from ours.

When the crows mate, they rub their cloacas together. In the process of rubbing, the sperms of the male are transferred inside the female’s cloaca. These ejected sperms then travel inside the female’s body, finally reaching their reproductive tract, fertilizing the ovum.

The whole process lasts for about 15-17 seconds and is also referred to as the “Cloacal Kiss.”

Do crows mate for life?

While the crows are so expressive and affectionate towards each other during the courtship, what happens afterward? Do the crow couple estrange each other and look for a new mating partner a year later? Or are they more like lovebirds?

As far as the studies conducted on their species are concerned, crows do mate for life. These birds are intelligent and social and surprisingly family-oriented and like to care for their younger ones, at least before they reach their sexual maturity. This is why you can find many American crows living in small families of 6-9 crows, including the parents, for years.

Once the crows have mated, they remain loyal to their partners year after year until one of them either has died or lost the ability to mate. While the older crow couples usually stick together for life, break-ups do happen among the young, immature crows when they are unable to reproduce together.

However, when the crows find a healthy partner (and can reproduce with them successfully), caring, dominant, and protective, they will not break off their partnership.

Unlike most of the other male birds that abandon the females right after mating, the male crows stick to the females and help them throughout the incubation (in building the nest and keeping it warm), and raise their babies together when they hatch from the eggs.

Do crows cheat on their partner?

Nope, they do not. Crows take their loyalty towards their partner very seriously and are happy to spend their entire life with them. However, on the off chance that one of them dies, the remaining crow might look for another partner. Although that is not exactly cheating.

How often do crows mate?

As we’ve already mentioned earlier, crows tend to mate with their partners every year, right after they gain sexual maturity until they live. Crows have a specific mating season and are never seen mating outside of it.

Conclusion: Do Crows Mate For Life?

In this article, we looked at the question Do Crows Mate For Life? based on facts and supported by scientific evidence and observed that these birds do mate for life.

Crows mate for life and the pair stays together all through their lives. It forms a strong bond between the crows and they understand each other’s communication. The crows watch how a former partner interacts with a potential mate before they make up their mind whether to accept it or not.

The world is filled with amazing creatures, and crows are among them. Learn everything there is to know about the birds that grace our skies with feathers and flight; from their amazing colors to their hunting behaviors, to their life cycle.

Crows live in pairs or small family groups. About 87% of the total number of crows mate for life. The average lifespan of a crow is 10-15 years. The pair usually has 1-3 broods (about 3-4 chicks per brood) each nesting season.

In conclusion, crows and many other birds do in fact mate for life. These animals will consistently stay with their partner for as long as both of them are alive.