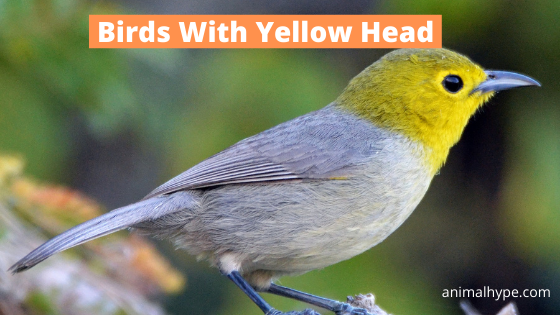 While most birds have the same color all over their bodies, some also have uniquely-colored heads that do not match the rest of their body. For instance, the bald eagle: its head is white, while the rest of its body is dark brown. In this article, we will find out which birds have yellow heads. 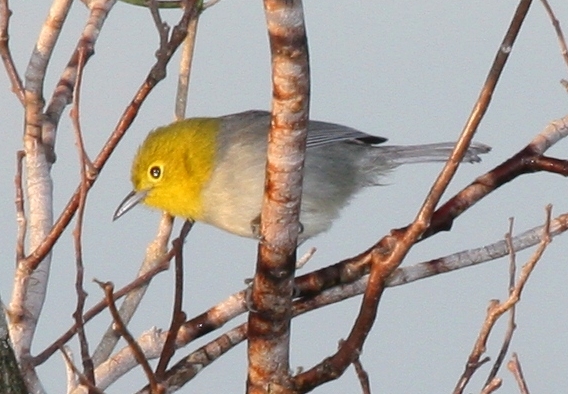 The Yellow-headed Warblers were initially placed in the group of New World Warblers or Wood Warblers. However, recently, these birds have been moved to the family of Cuban Warblers because of their nativity to the western parts of Cuba.

They have a small body with a light-yellow head and white underparts. Their wings are grey with a slightly yellow hue. 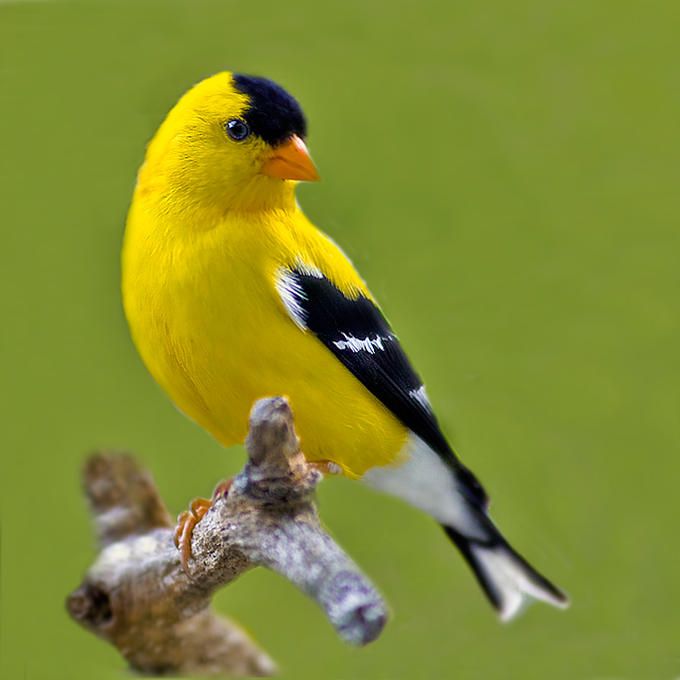 Of all the birds belonging to the finch family, the American Goldfinch is considered to be the prettiest, because of both their bright appearance and sweet flight calls. As is true in the case of most birds, the male American Goldfinches are more beautiful than their female counterparts, especially in the breeding season.

They have a lemon-yellow body with a shiny black head cap, black wings with white bars. The females, on the other hand, have olive-green upperparts and yellow underparts. Their wings are a dull black, and they lack the blackhead cap of the males. Both sexes have a pink, conical beak.

These migratory birds are found all over North America, residing between Alberta and North Carolina in the breeding season, and from the south of the Canada-US border to Mexico during the winters. The Wilson’s Warblers are named after Alexander Wilson, the American ornithologist. They are also known as “Black-capped Warblers” because of the black cap present atop their heads.

These birds breed in the western part of the United States and northern Canada. Due to their habit of nesting in the lower parts of plants, they are often called “Thicket Warblers”.

They have a yellow head and underparts, with green-brown upperparts and wings. They have a short, pointed bill, small black eyes, and dark legs. Their main diet includes insects such as bees, beetles, and caterpillars. 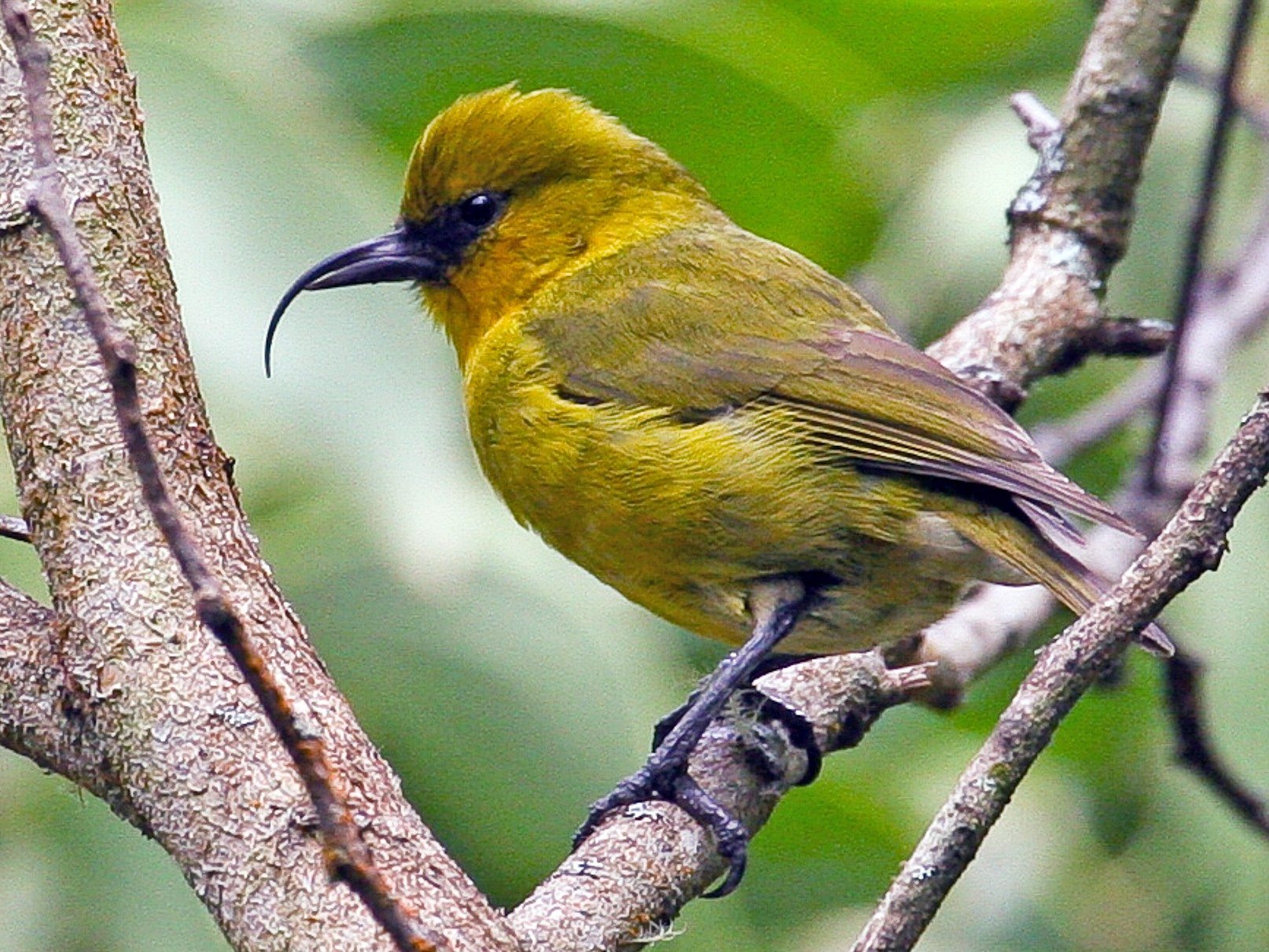 Found in the dry and montane moist forests, the ‘Akiapola‘au belong to the family of Hawaiian honeycreepers but have many tendencies of woodpeckers.

They have an orangish-yellow head and chest with a black face mask and wings. They have an unusually curved bill.

They mainly drink the nectar from flowers but are also known to eat invertebrate animals and insects. In 1976, the IUCN declared them to be an Endangered Species. 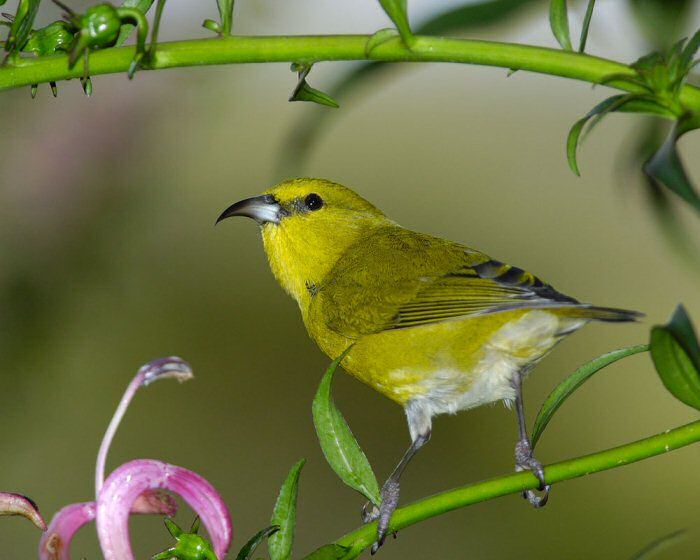 Native to Kaua‘i, the Kaua‘i ‘Amakihis are a family of Hawaiian Honeycreepers who has a large, sickle-shaped bill that curves downwards. They feed on both fruits and insects and nest on the upper parts of long trees.

The introduction of new species to Hawaii and climate change has impacted their population, but not severely enough to push them into the Threatened Species List of the IUCN. The Blue-winged Warblers belong to the family of the New World Warblers and can be commonly seen in eastern North America during the breeding season. In the winters, they migrate to Central America. They are mostly found to inhabit large, abandoned fields.

The males have a narrow black line around their eyes, while the rest of their head and body is yellow in color. Their wings are bluish-grey with white bars. The females are overall duller than the males in appearance. 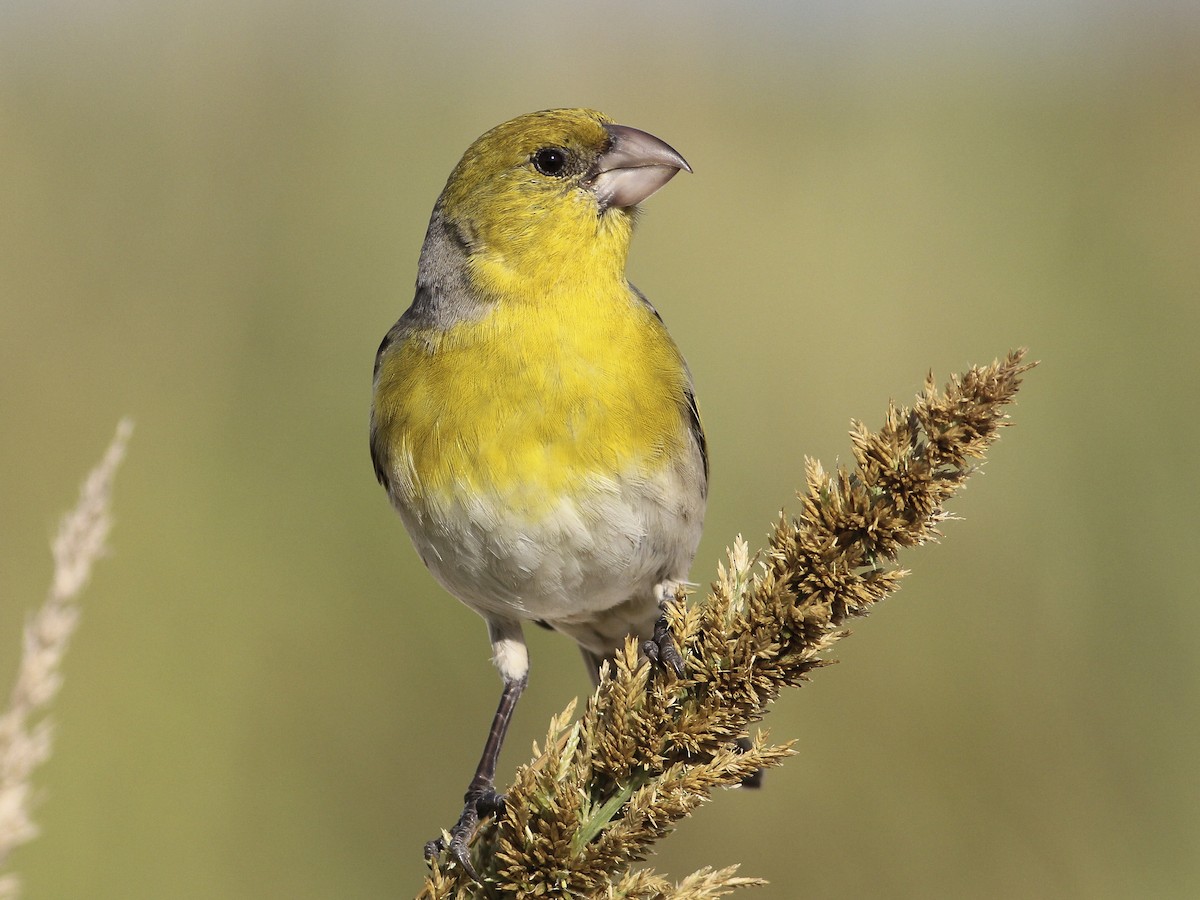 Although the Laysan Finches are called “finch”, they are actually finch-billed birds that belong to the family of the Hawaiian Honeycreepers.

These birds are native to the North- Western Hawaiian Islands and are closely related to the Nihoa Finches. Since they were first discovered on Laysan Island, they were named after it.

The Laysan Finches have a short but heavy bill. The males have a yellow head, upperparts, and plumage, with a grey neck and whitish underparts. The females are duller and have brownish streaks all over their bodies. Belonging to the family of the New World Warblers, the Prothonotary Warblers are small songbirds native to North America. They breed in the US and southeast Ontario and migrate to West Indies, northern South America, and Central America in winters.

They have a bright yellow head and underparts, with bluish-grey wings and tail. The males are brighter in appearance than their female counterparts. While the females build the real nests, the males construct several incomplete and unused nests in their territory. 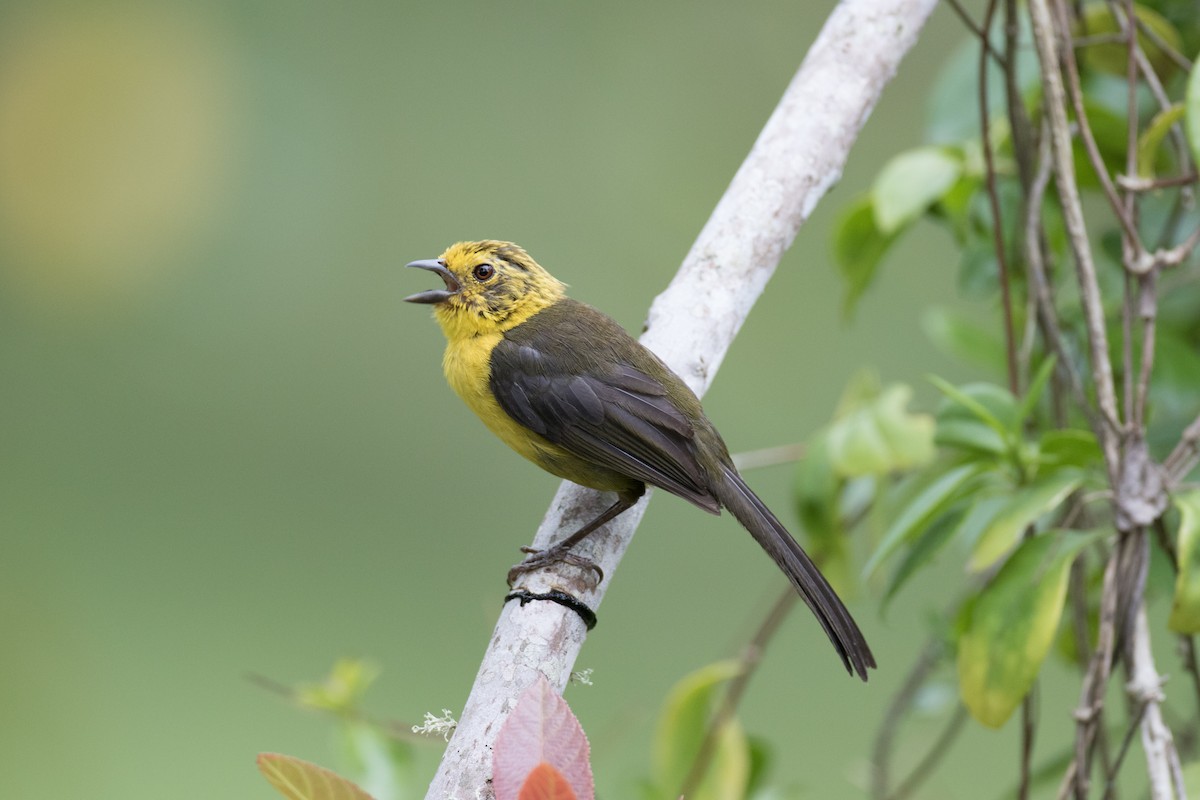 Although some people still insist on calling them “olive-headed brushfinch”, the Yellow-headed Brushfinches have been named aptly after the true color of their heads.

These birds belong to the American Sparrow family and are native to Columbia. The IUCN has placed them under the category of the Threatened Species.

Their heads are dark yellow but sometimes appear to have an olive hue. The rest of their body is bright yellow as well, with the exception of their olive-green tail and wings. It is believed that their females have an olive head, although it lacks sufficient pieces of evidence. Of all the New World Warblers found in America, the Yellow Warblers are by far the most common. In the breeding season, these birds nest in northern South America and the Caribbean, and in winters, they travel to the south as far as Peru.

Aptly named, they have they yellowest body among all other warblers, and are colored in the same shade from head to toe. The males are adorned with streaks on their breasts that the female lacks. 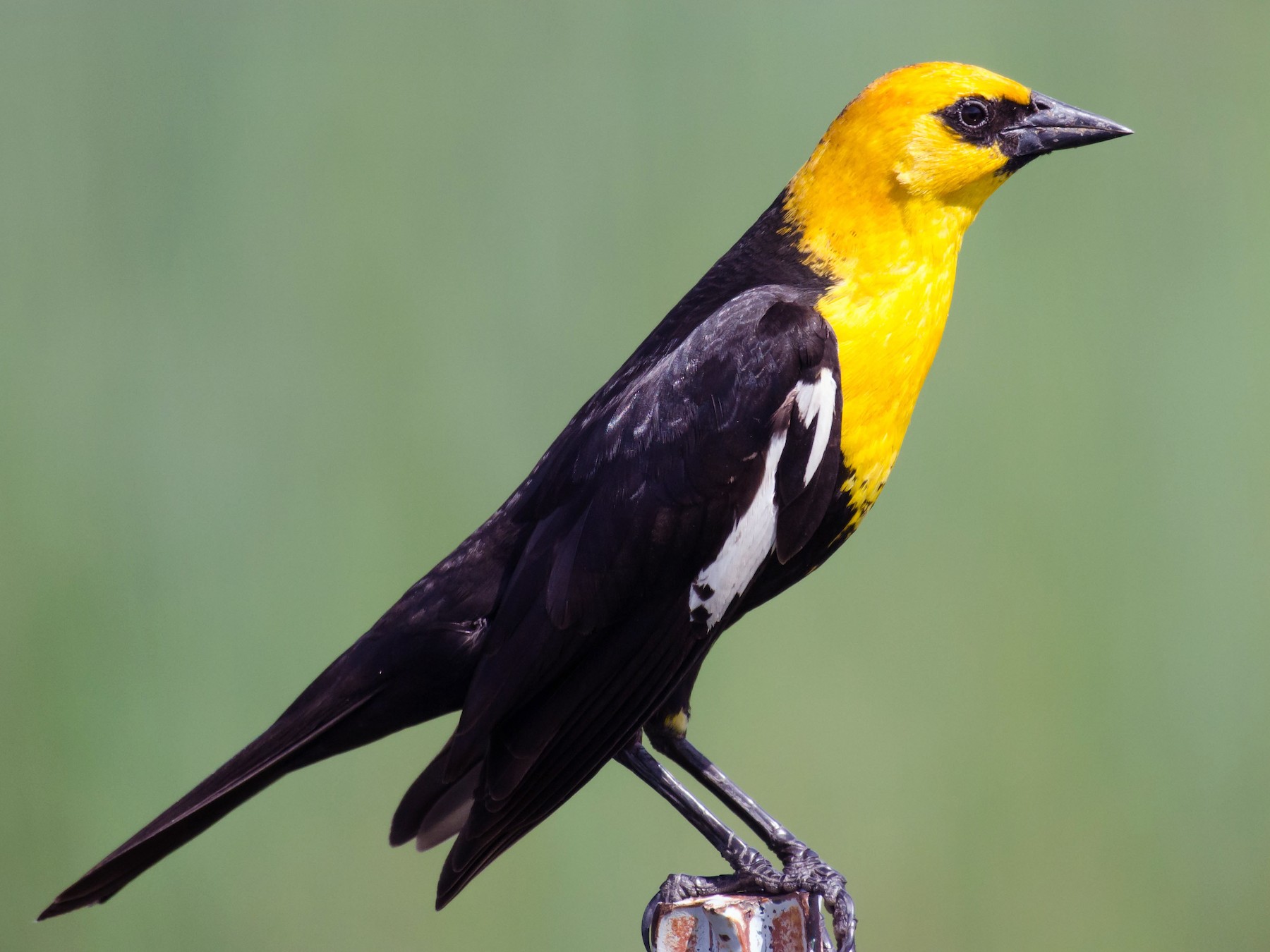 The Yellow-headed Blackbirds belong to the family of the Icterids or the New World Blackbirds. Native to America, these birds breed in the marshes (mostly in the west of the Great Lakes). In winters, they migrate to the southwestern US and Mexico.

The males have black eyes, a pointed black beak, and an overall black body except for their yellow heads. The females, however, have a dull brown body. 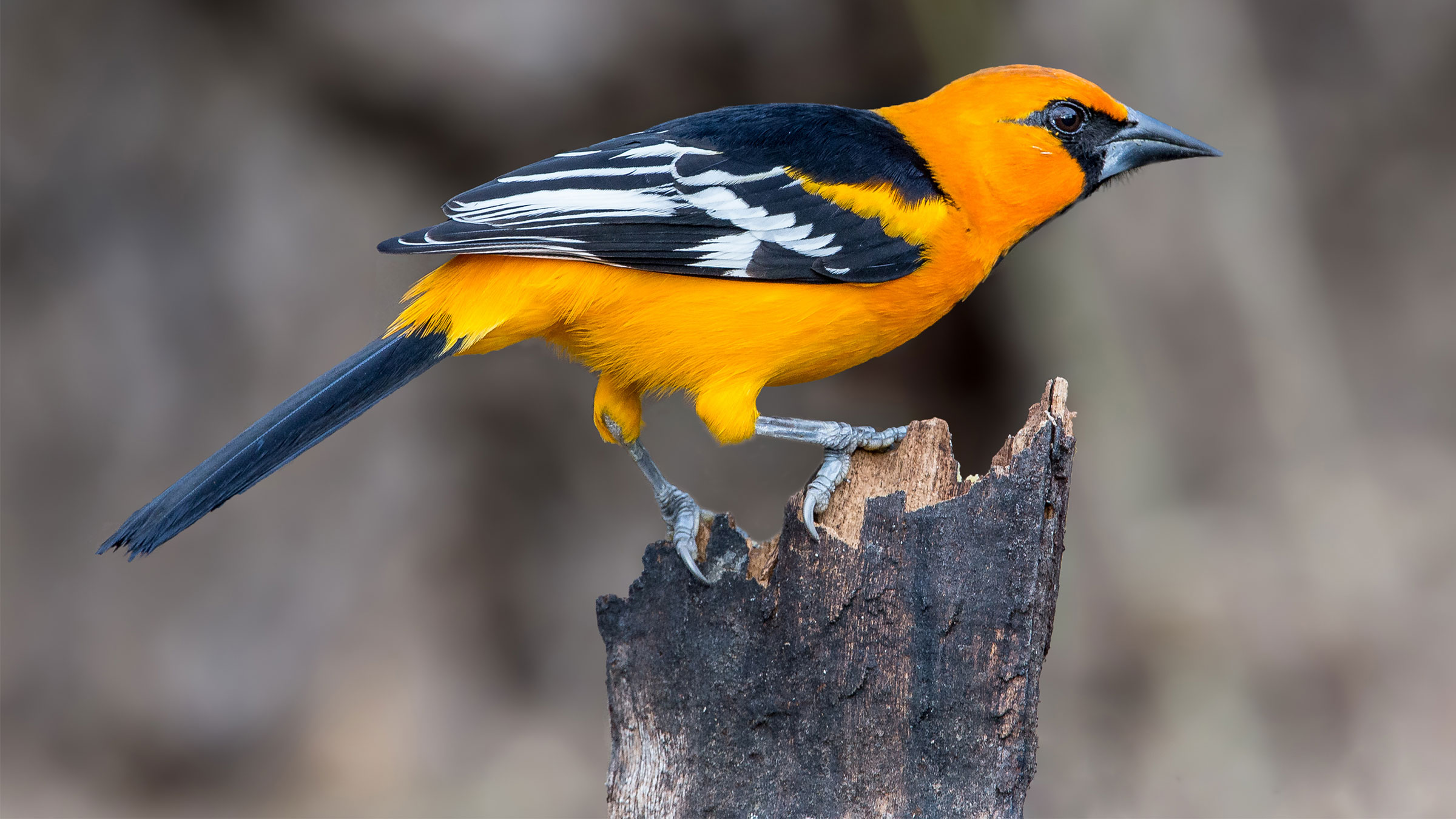 Found in northern Central America, Texas, Mexican Gulf Coast, and Pacific coasts, the Altamira Orioles are the members of the New World Orioles. These birds are the largest members of their genus.

Their heads, neck, and underparts are a bright orangish-yellow, with black wings and tails with white bars. They feed on small fruits, figs, and insects such as grasshoppers, caterpillars, and crickets. 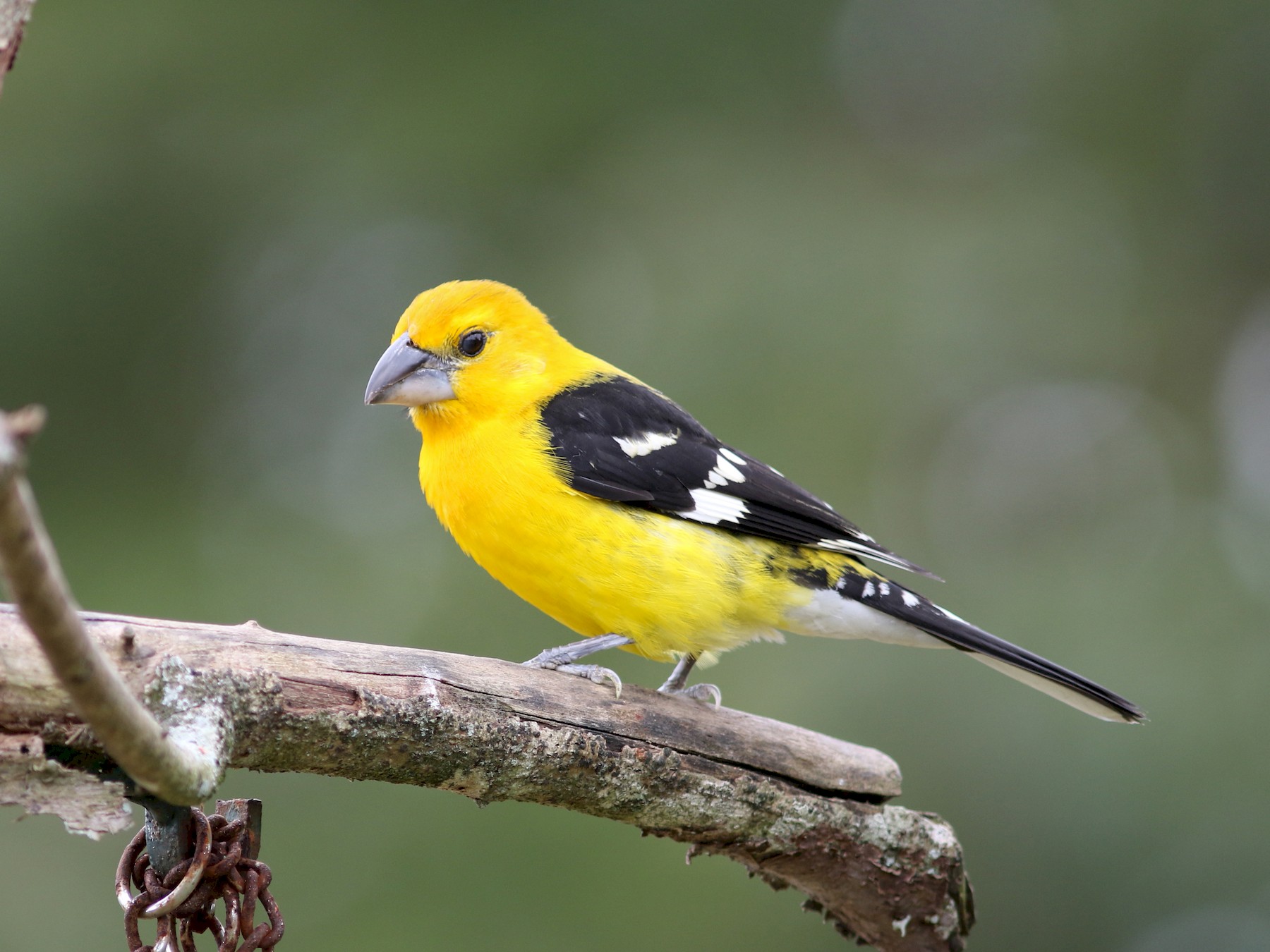 The Yellow Grosbeaks are migratory birds belonging to the family of the New World Grosbeaks. These birds are native to Mexico, and are thus also called “Mexican yellow grosbeak”. Their bodies are a striking contrast of yellow, black, and white. While their body is almost entirely yellow, they have black wings with unusual white spots. 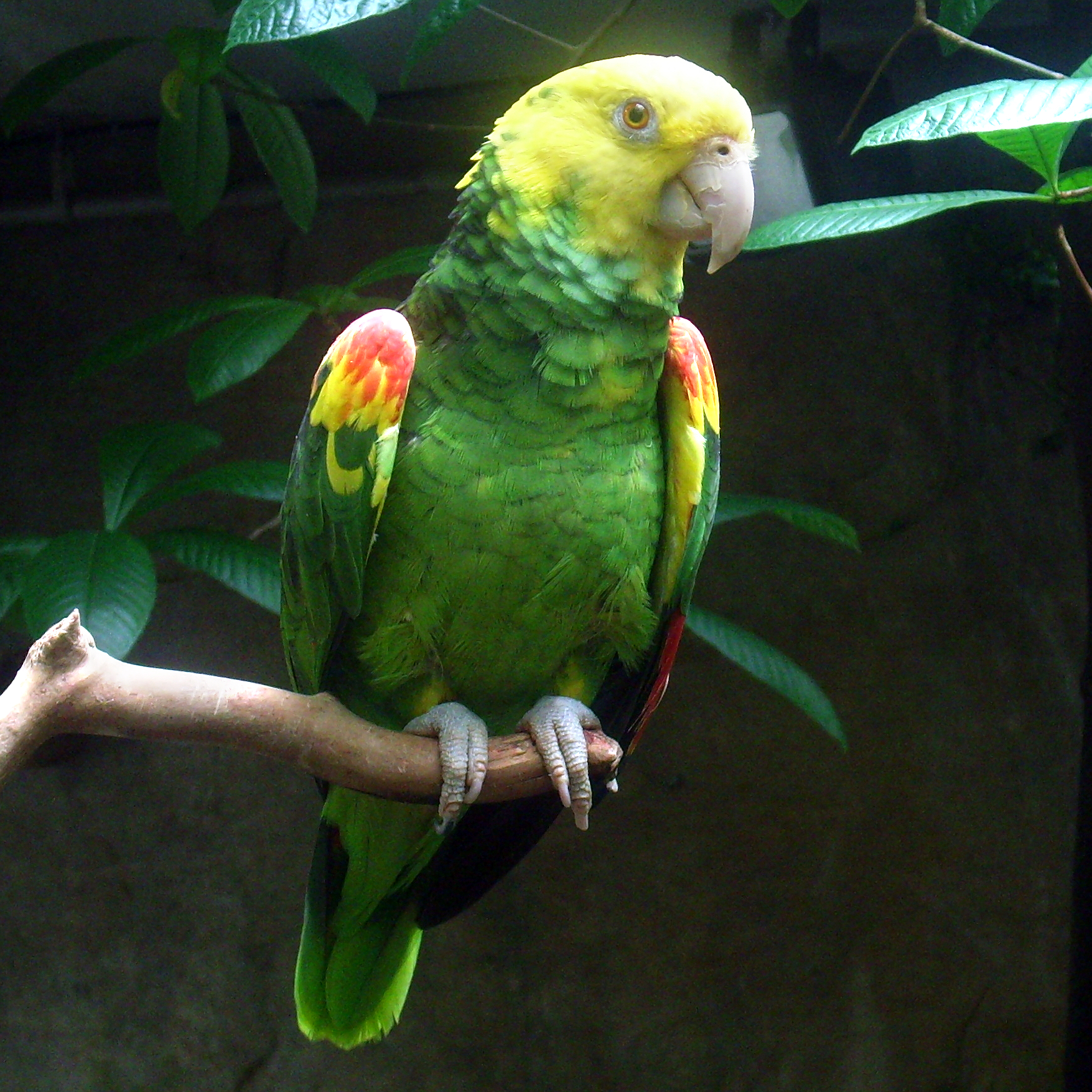 Found in Mexico and northern Central America, the Yellow-headed Amazons is a member of the parrot family. They are also known by names like “yellow-headed parrot” or “double yellow-headed amazon”. They have a green body with a yellow head and neck, with red streaks on their wings. 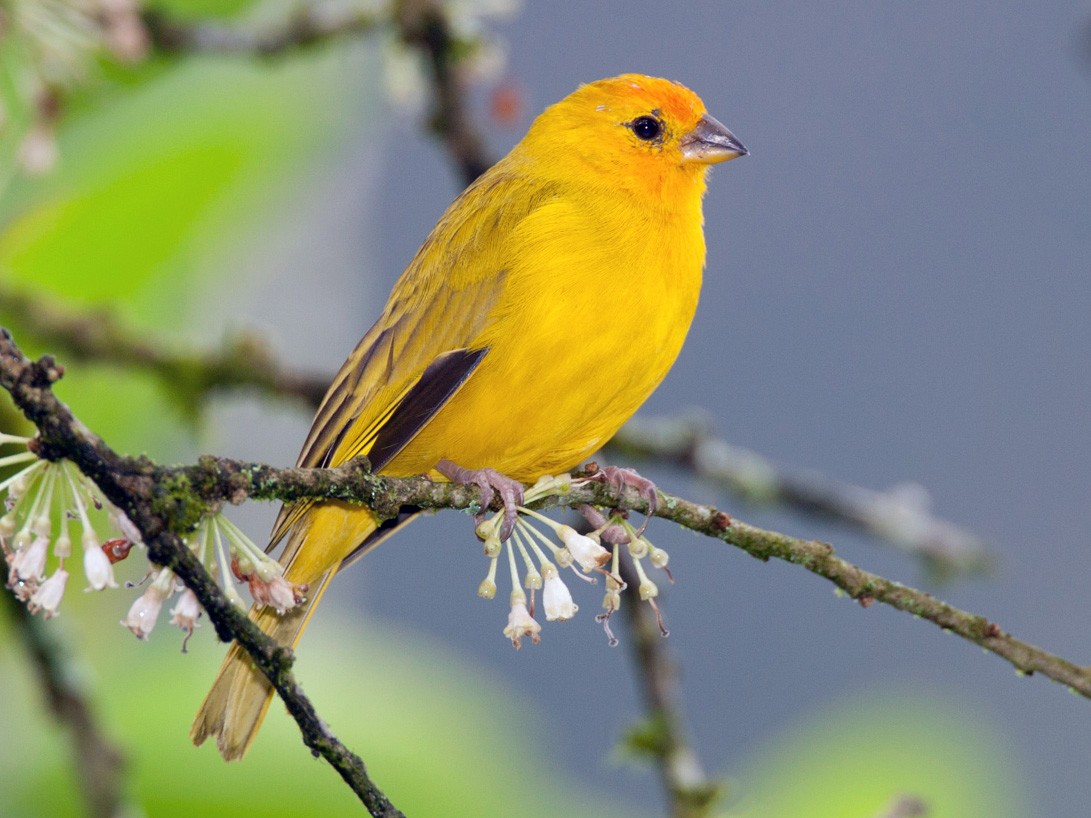 The Saffron Finches are the members of the tanager family native to South America. They have a yellow head, neck, and underparts, with yellow wings streaked with brown, and a short dull-brown beak. 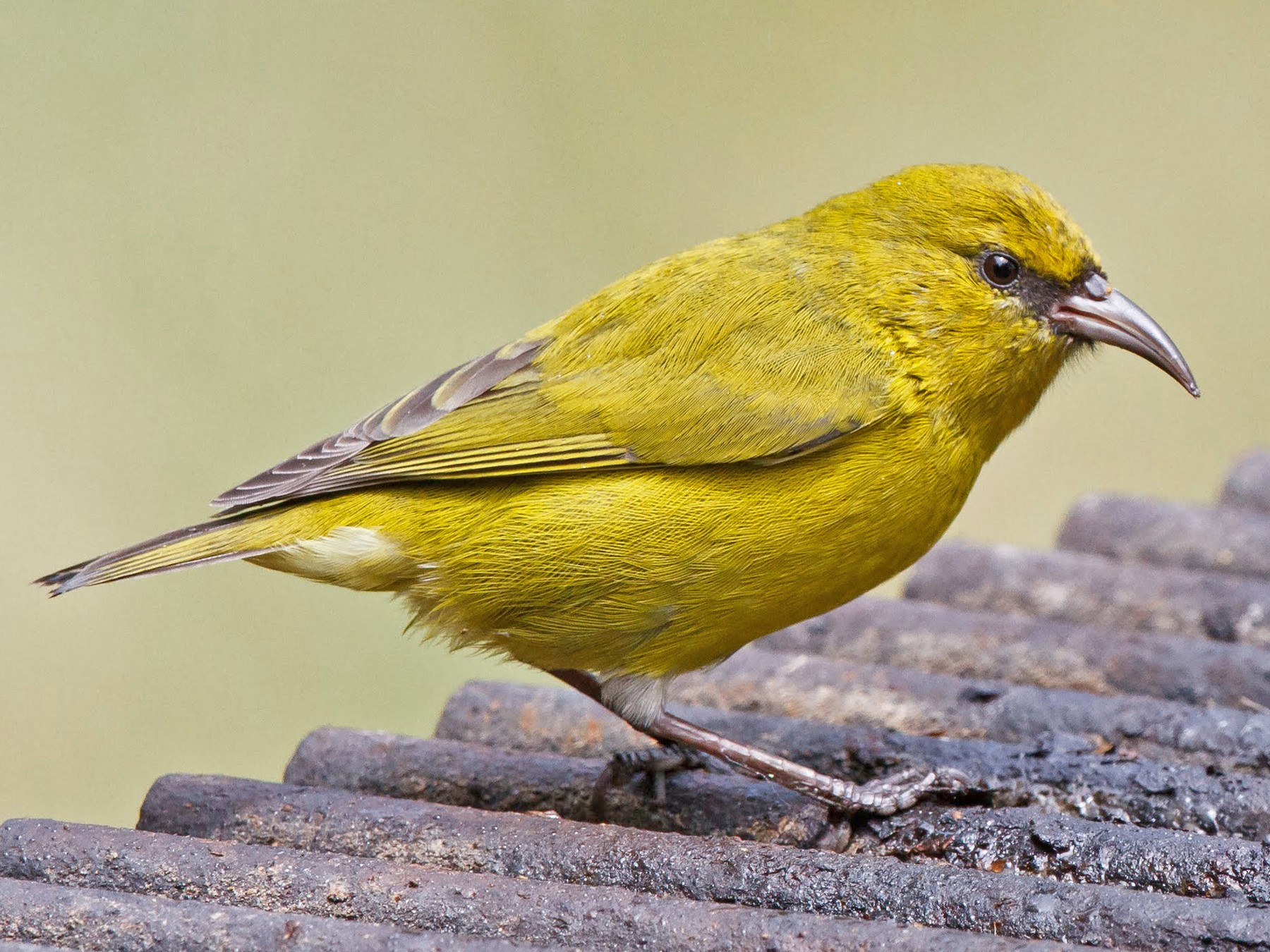 Hawaii ‘Amakihis are birds belonging to the family of the Hawaiian Honeycreepers. They reside in the Moloka’i, Maui, and the Big Island in Hawaii. These birds are flexible when it comes to their habitat, and are found both in the dry as well as wet forests of Hawaii.

They have a pale-yellow body with wings that have a darker shade. They appear to be similar to the Maui ‘Alauahio, but their beaks are slightly curved, unlike the short and straight beaks of the latter.

The changing climate of Hawaii, which has affected all the native birds and animals, has had the least impact on the population of Hawaii ‘Amakihis. 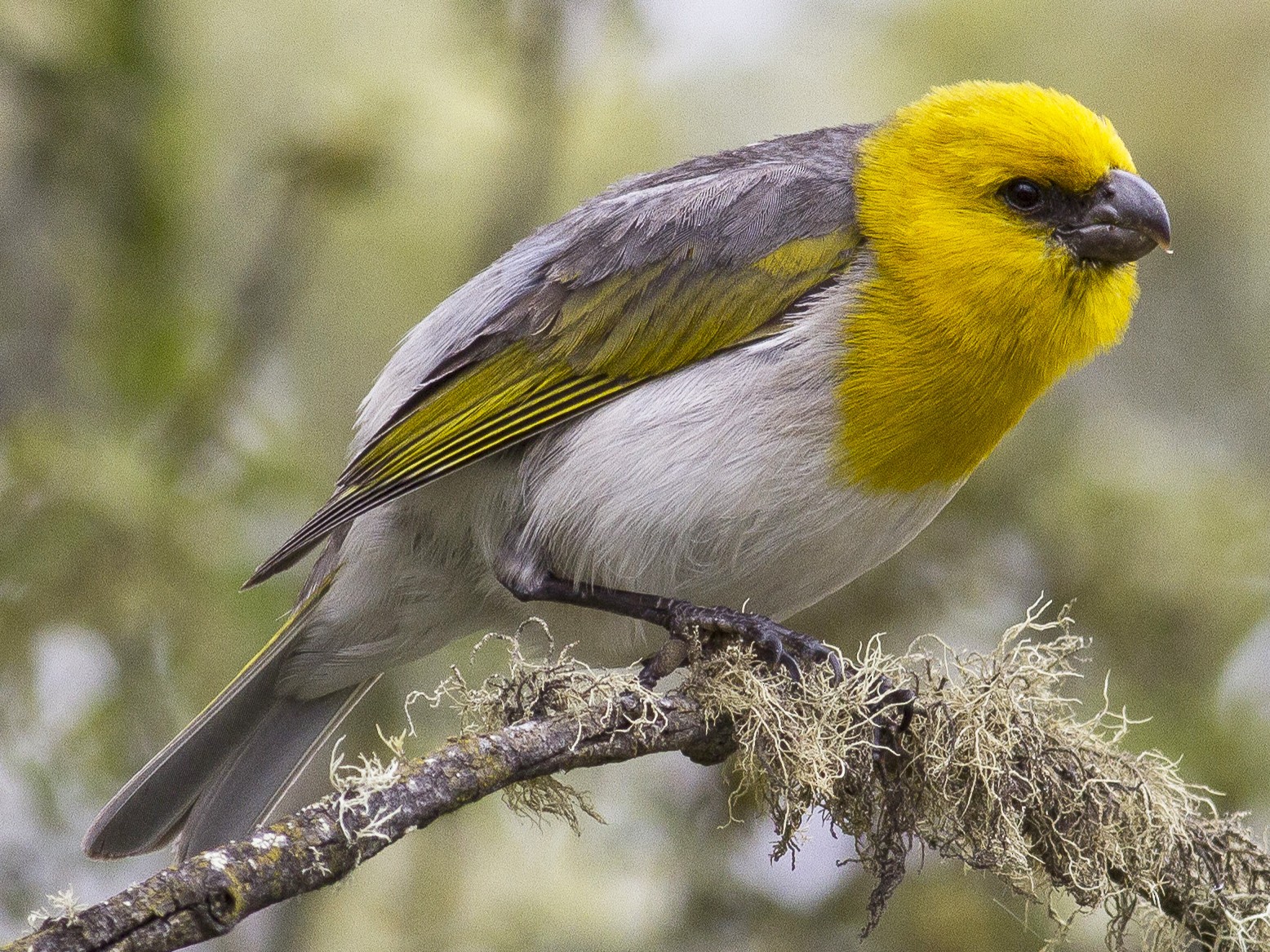 The Palilas is a severely endangered species of finch-billed Hawaiian Honeycreepers. They have a golden-yellow neck and head, with white underparts and grey upperparts.

Their wings and tail and slightly greenish in color. Their bills are short and thick, with brown irises and dark feet. The males are more brightly-colored than their female counterparts.

The Palilas inhabit dry forests, the mamane trees in particular. It is the large-scale deforestation of these trees that has led to the sharp decline of their population. 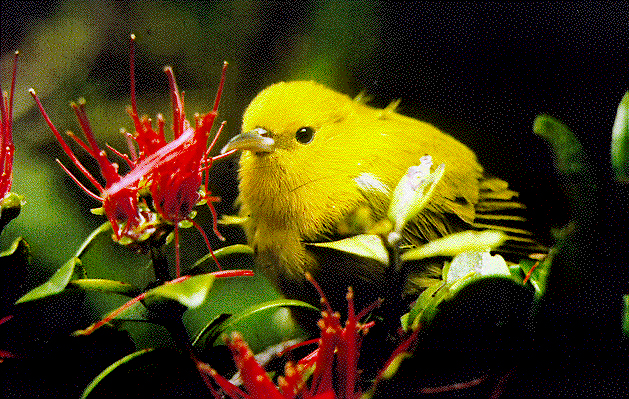 The ‘Anianiaus are the smallest members of the family of the Hawaiian Honeycreepers. These little birds are native to the upper forests of the Kauai Islands, Hawaii.

Distant relatives of the ‘Amakihis, the ‘Anianius have a bright yellow body with slightly darker wings and tail. Their beaks are curved and golden in color. Although nectar is their staple diet, these birds can also feed on small insects and spiders.

Since they reside on the trees native to Hawaii, the introduction of non-native plants on the islands is one of the central reasons behind their steadily declining population. 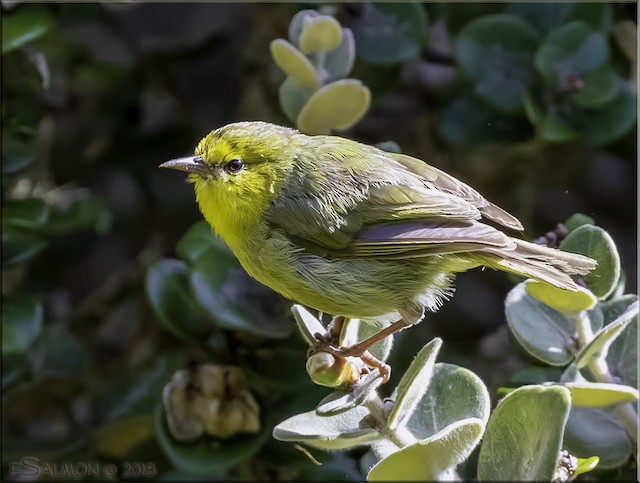 The Maui ‘Alauahio is also referred to as “maui creeper” or “maui nui ‘alauahio” by the common folks of the Hawaiian Islands. These little birds are native to the native Maui Nui, an island of Hawaii. However, today, they are also found on the islands of Kaho’olawe, Lana’i, Maui, and Moloka’i.

They have a small, yellow body that appears to be duller in the upperparts and brighter in the underparts. Their wings have a brownish hue to them, with their short brown legs and bills. Both sexes appear similar.

They reside on trees and forage on the native plants of Hawaii. Due to habitat loss, the species of these birds face the danger of extinction.

Yellow is said to be the color of joy. The birds who have yellow heads are, thus, a joyous sight for us. The list given above will help you identify every yellow-headed bird you encounter in the future.