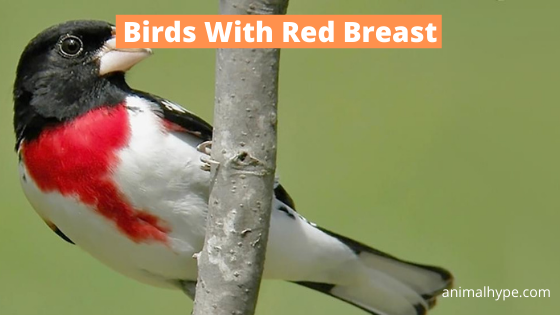 Red is a color that brings a sense of warmth and passion. It may be one of the reasons why red-breasted birds are so charming and beautiful to most people.

Birds that have bright wings are naturally found to be attractive by all of us. However, their bodies play an equally important part in their appeal. If a bird has a vibrantly colored body, its wings might even go unnoticed at times. In this article, we will take a look at the list of 20 American birds that have red breasts.

There are a number of different reasons why birds may find themselves with red-colored breasts. The color red is obviously important to many species as a warning sign, but also mothers will often display the color to attract nearby mates.

There is certainly a lot more to say about the fascinating characteristics of these colorful avians. Below you will find an informative list of birds that have reddish-colored breasts, this should hopefully provide some additional information about their behavior! 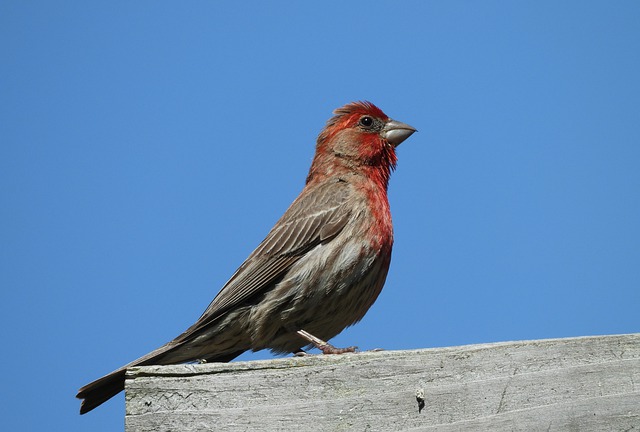 The head, breast, and rump of these birds are red, while the rest of their body, including their plumage, is a muted shade of light brown.

The coloration in the male House Finch can vary from red to yellow or orange. The cause of this variation is not a regional difference but simply a difference in their diet. 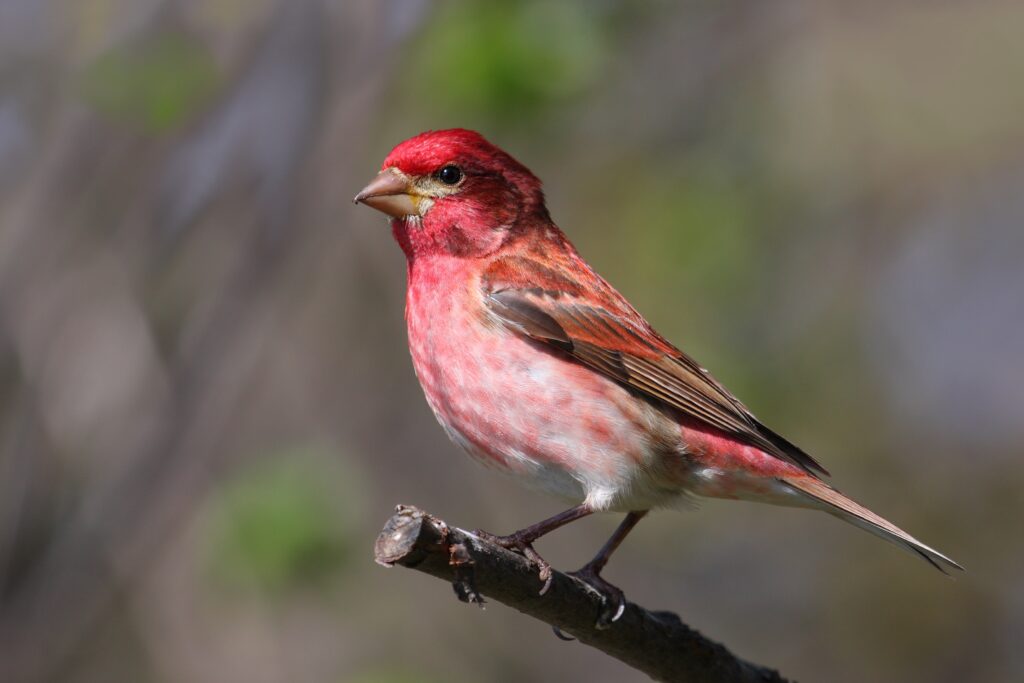 The breast of the Purple Finch is not a pure shade of red, but a pinkish-red. Although they are called “purple finch”, the color they acquire is not purple but a rosy shade of red.

The female Purple Finches do not share the rosy-red coloration of the males. Unlike the House Finches, the Purple Finches like to inhabit areas that are less disturbed by the human population.

They are mostly found in coniferous or deciduous forests, shrublands, and old fields. 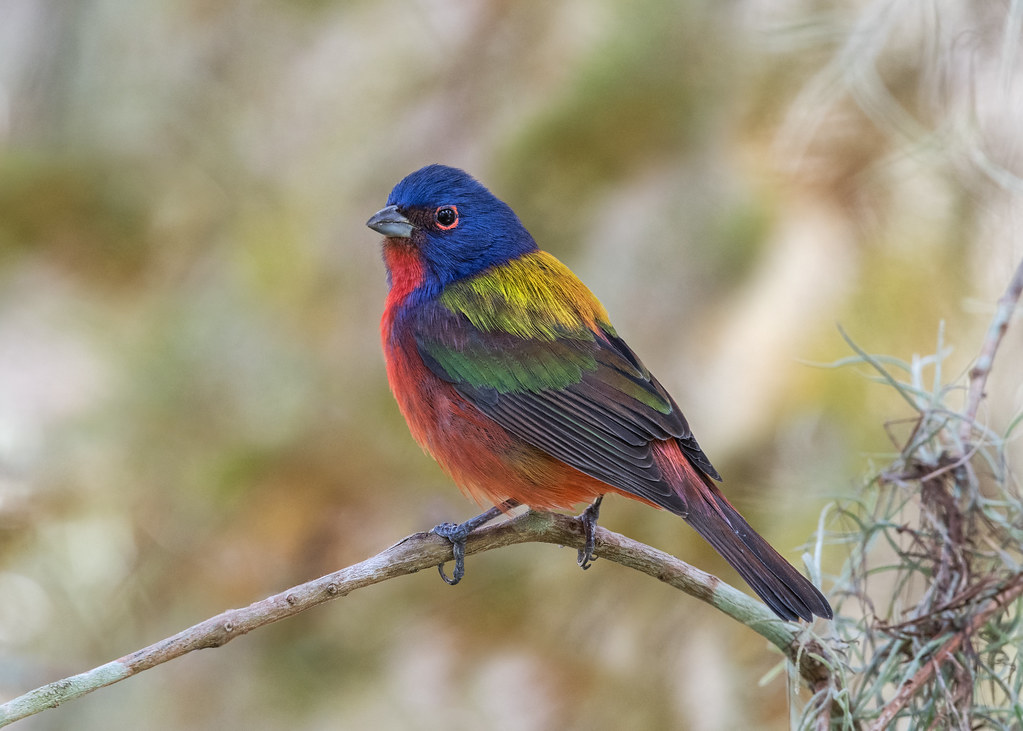 The Painted Bunting belongs to the family of the cardinal birds. These birds are popularly known by the name of “Nonpareil”, which translates to “unrivaled”.

It describes the unimaginable blend of colors on their bodies, which can be matched by none of the other cardinals.

Although the Painted Buntings are secretive birds, they are more commonly seen in the woodlands of the Southeast. They are social birds that forage in flocks, often with the other bird species as well. 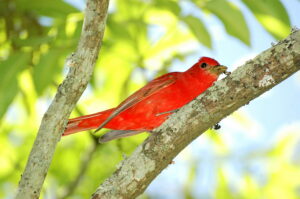 The Summer Tanager is one of the most remarkable breeding songbirds of North America. While the female Summer Tanagers have a mustard-yellow body with green wings, the males have bright red shade all over their bodies.

You can find these birds perched on the oak, pine, and willow trees. In the winters, most of these little birds migrate to Mexico and other regions of Central America. 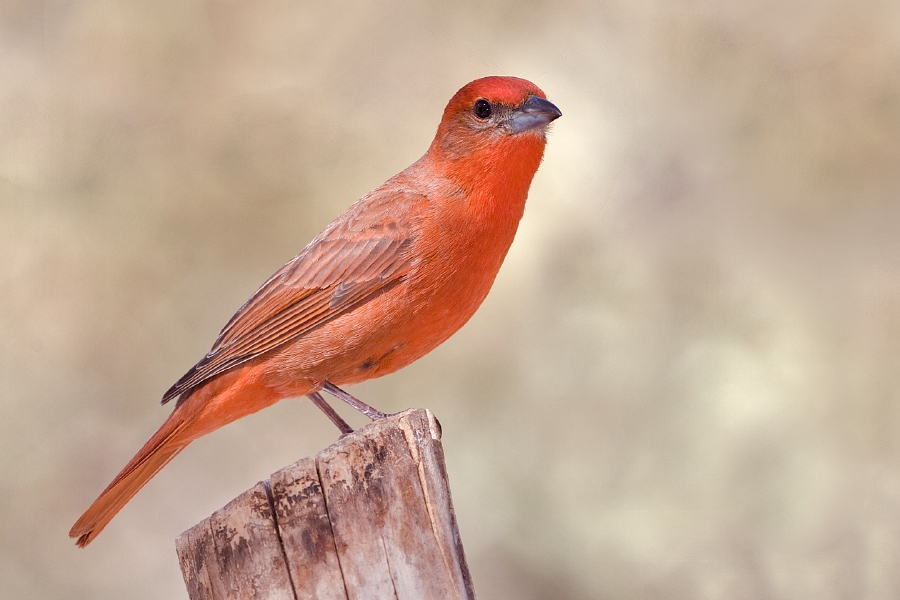 The Hepatic Tanagers are another species of American songbirds who were initially said to belong to the tanager family.

However, recently, researchers have found that these birds are actually cardinals, due to their similar plumage and voice. The male Hepatic Tanagers have a red body with a greyish-red plumage, while the females are mustard-yellow in color.

The Hepatic Tanagers are highland birds who frequent the mountain regions of New Mexico and Arizona during the summer and spring seasons. 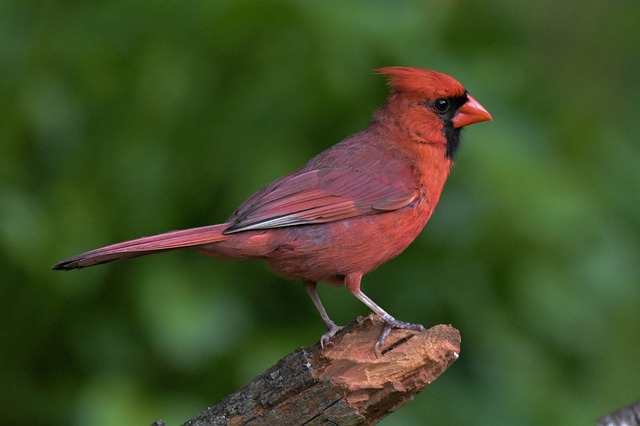 Also known by the names of “Redbird” and “Virginia Nightingale”, the Northern Cardinals can be easily distinguished from other cardinals by their bright red plumage and prominent head crest.

The males Northern Cardinals have a red body with a dull grey tint over their wings. The females, on the other hand, have a golden-tan body with a tinge of red to their wings and tail.

Another remarkable feature of these birds is their melodious songs, for which they are also referred to as “nightingales”. 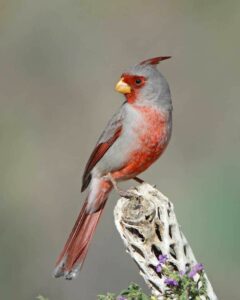 The Pyrrhuloxia, also known as the “desert cardinal”, inhabits the dry region of Southwest America. In terms of behavior and habitat, there are many similarities between the Northern Cardinal the Pyrrhuloxia.

However, the former cannot tolerate the harsh climate of the dry deserts as well as the latter. Used to the lack of trees in the desert, these birds mostly forage on the ground, shrubs, and smaller trees. 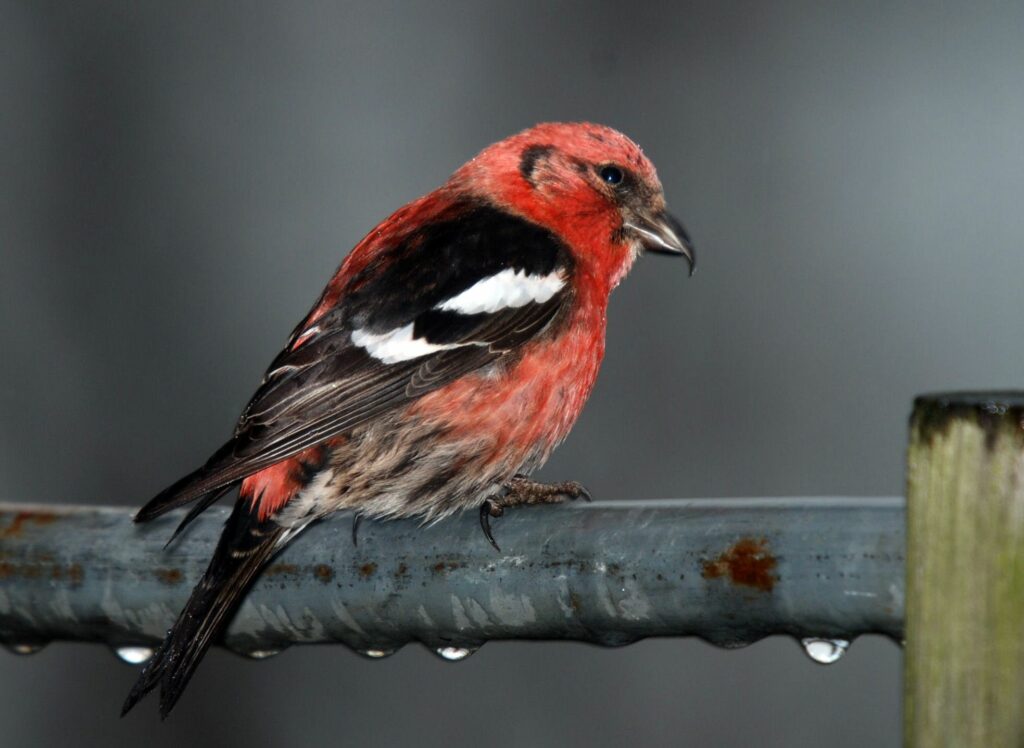 Although the White-winged Crossbills have an overall red body and black wings, they have been named so because of their white-winged bars, which work as a field mark for the bird-watchers.

These birds frequent in the Boreal forests, but can also be found in your backyard bird feeders occasionally. They are highly social and live in flocks all year round, including the nesting season. Unlike the males, the females have a yellowish body, with the same wing and tail pattern. 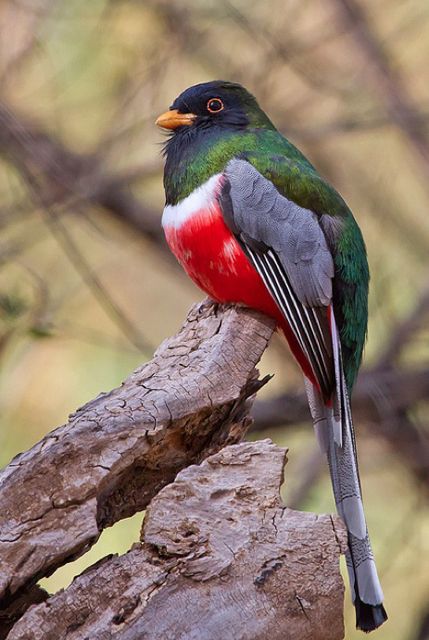 The Elegant Trogons were initially called the “coppery-tailed trogon”. The Greek term “trogon” translates to “gnawer” in English, which refers to the hooked bill and insectivorous diet of these birds.

All the other Trogon birds live in tropical forests; these are the only ones who inhabit North America. The heads of these birds are metallic green, with a white streak that marks the distinction between the head and underbody. Their underbody is bright red in color.

Also known as the “Scarlet Honeycreeper”, the ‘i‘iwi is a passerine bird that belongs to the family of the Hawaiian honeycreepers.

Native to the Hawaiian Islands, these birds can easily be recognized by their uniquely decurved, salmon-colored bills. They have black wings and a black tail, with a vibrant red plumage all over their bodies.

Due to Avian Malaria (a parasitic disease in birds spread by mosquitoes), the population of the ‘i‘iwi birds is declining severely. The IUCN has placed them under the Threatened Species list.

The ‘Apapanes are the Hawaiian songbirds that, like the ‘i‘iwi, belong to the family of the Hawaiian honeycreepers. These birds have a short, slightly curved bill, an overall red body with dark wings, a tail, and a white vent.

The ‘Apapanes are known to live in the upland forests. They are nectar-sucking birds, fond of the ohia flowers in particular. 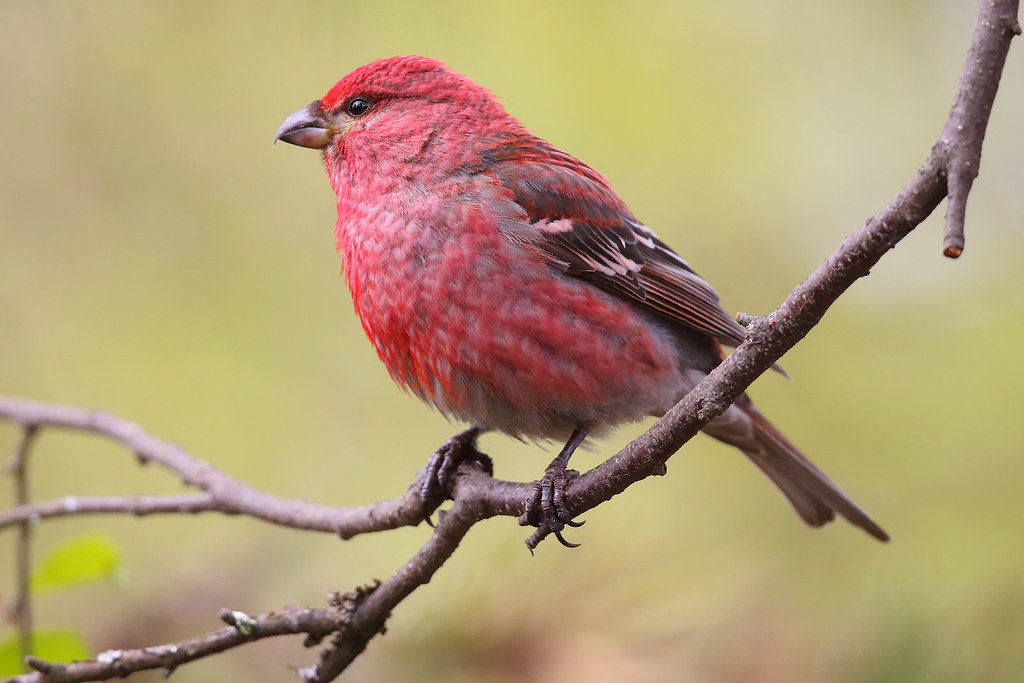 The Pine Grosbeaks are large, heavy-chested birds of the Finch family who frequent the subalpine forests. During winter, they move to the forests of ash, maple, and mountain ash in order to have access to an abundance of seeds to feed on.

The Pine Grosbeaks have different colorations in different parts of America; in California, they appear more orangish, while in the interior West, they appear in a shade of fading red. 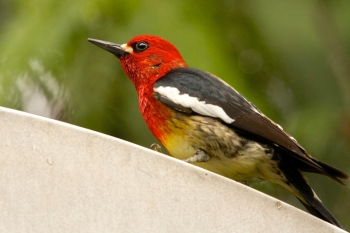 The Red-Breasted Sapsuckers are medium-sized woodpeckers belonging to the sapsucker family. They have a stout bill, an upright posture, and a still tail, all of which are traits of the woodpeckers.

A bright red hood covers their head, neck, and breast, below which their body has a muted shade of yellow. They commonly nest on the aspen, hemlock, and ponderosa pine trees in the deciduous and coniferous forests of America. 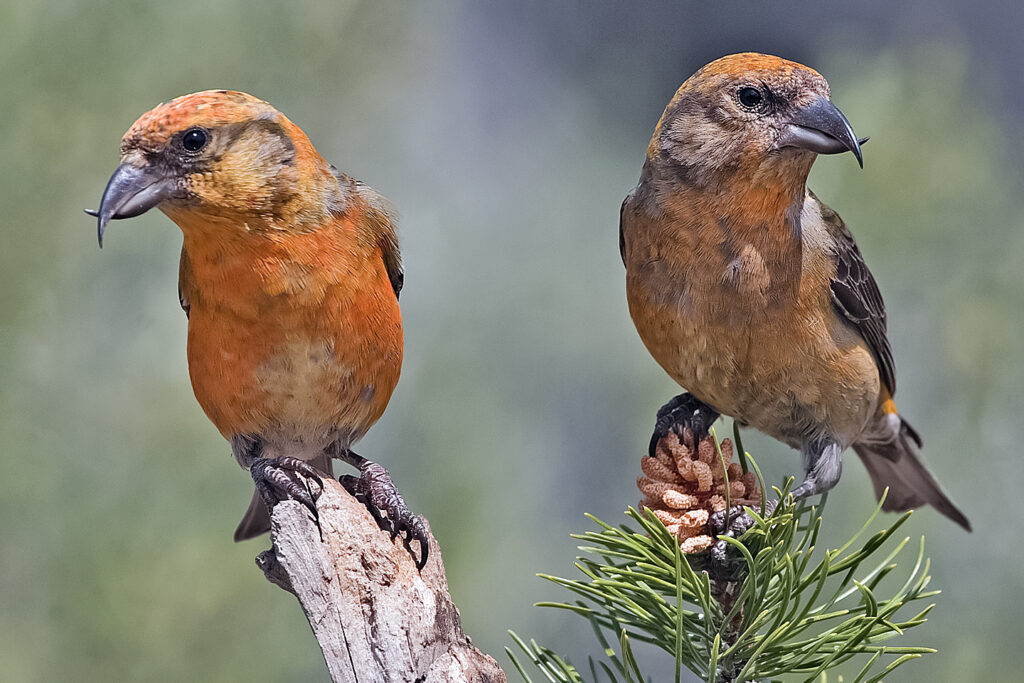 The females have an almost olive-brown body with yellow underparts. Conifer seeds make up a large part of their diet, because of which they mostly reside in coniferous forests.

They are also fond of sunflower seeds and often come to feed on the backyard bird feeders that contain these seeds. 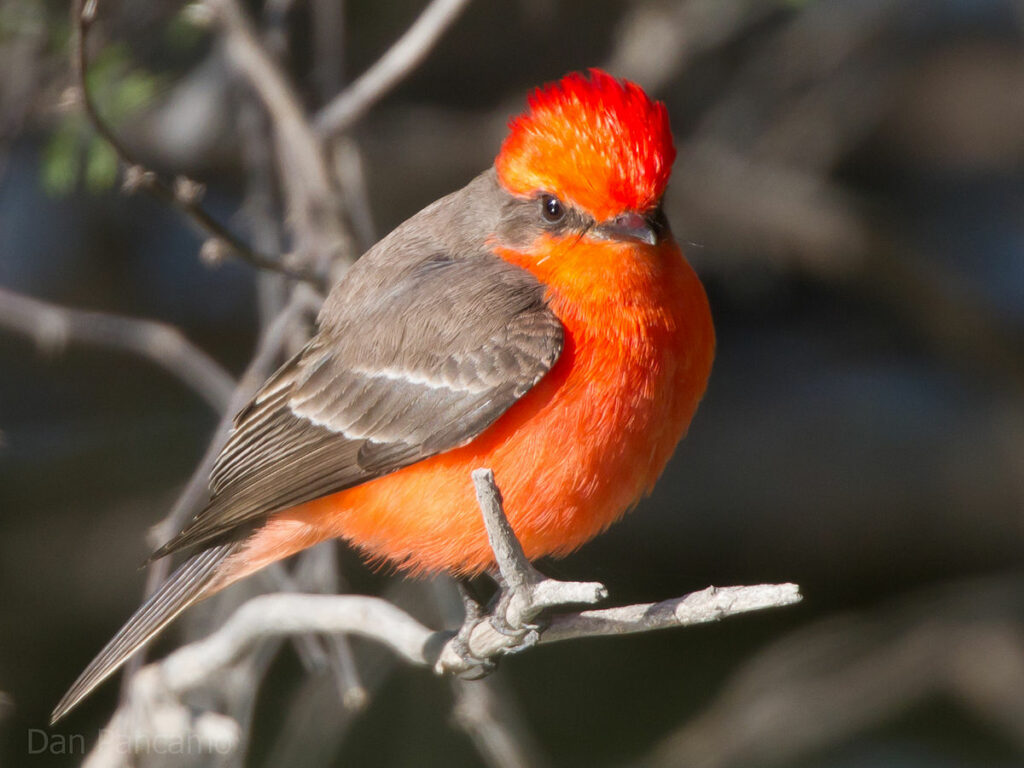 The Vermilion Flycatcher is the most attractive member of the tyrant flycatcher family. While the other flycatchers appear to be drab, the bodies of these birds are covered with a vibrant shade of red.

They like to stay close to the water and dip their tails in it. Thus, they are mostly found on the short trees at the edge of ponds, streams, and lakes. 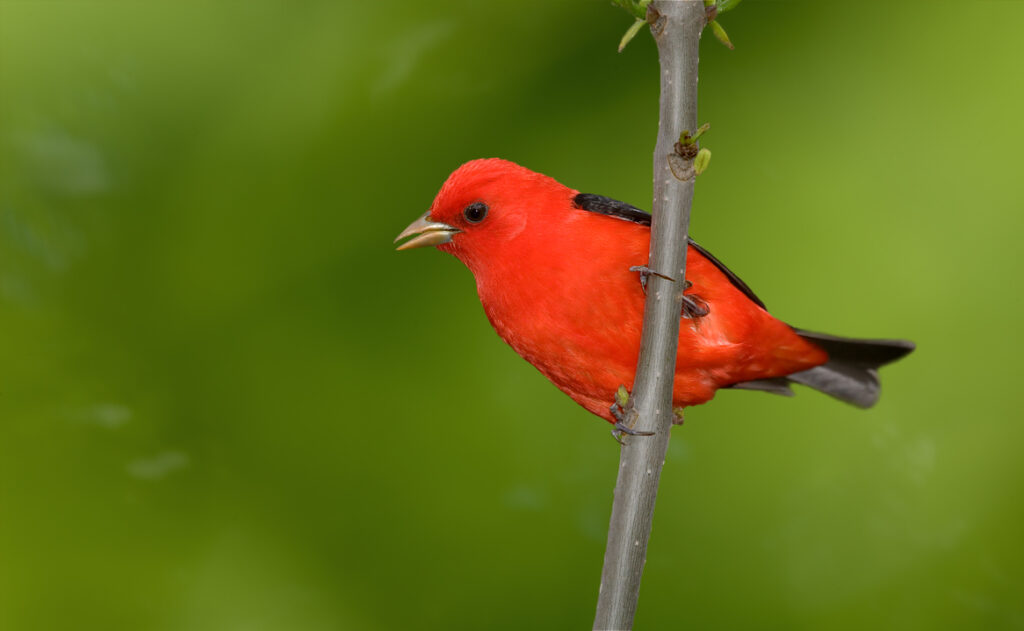 The Scarlet Tanagers are stocky, medium-sized songbirds who have rounded bills that enable them to eat both insects as well as fruits with ease.

These birds inhabit the deciduous-evergreen forests in eastern North America but migrate to lower shrublands and backyards in winters. 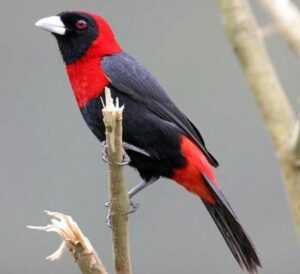 Most commonly found in northeastern Mexico, the Crimson-Collared Grosbeaks are herbivore birds native to North America.

These migratory birds move to Texas during winters. Both males and females have a large, cone-like beak, black hood, bib, and wings.

However, while the males have crimson-colored bodies, the females have a body color ranging between olive and yellow. 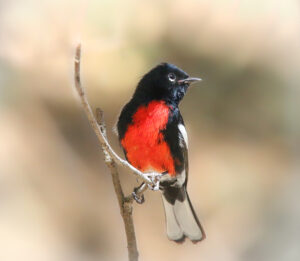 The Painted Whitestart is the largest of all the Whitestarts. These birds belong to the family of Wood Warblers or New World Warblers.

Most of their bodies are black, with their bellies and lower breast being red in color. They have large white patches on their wings and an outer tail. They are scattered all over Central America, Mexico, and Texas. 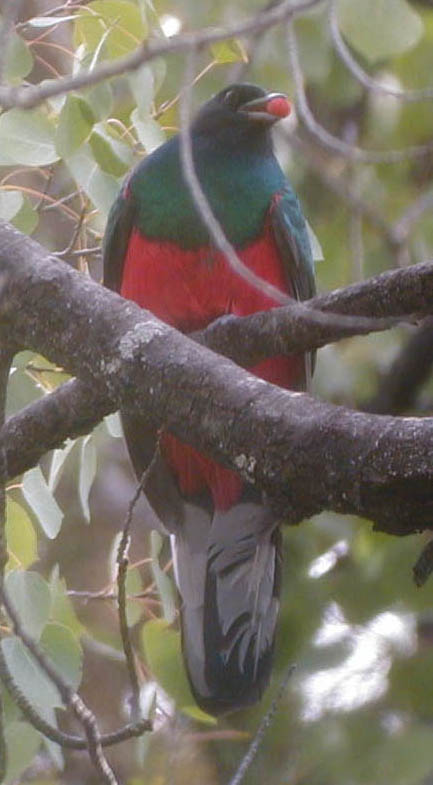 The Eared Quetzals are also known as “Eared Trogons” and belong to the family of Trogons. They are native to the mountain range of the Sierra Madre Occidental in western Mexico.

In the US, they are found in the south-eastern parts of Arizona, and the Madrean Sky Islands regions. A distinctive feature of these birds is hair-like wisps growing around their ears.

Their back is glossy green, with dark blue and white tail feathers. The chest and underbody of the Eared Quetzal is bright red in color. 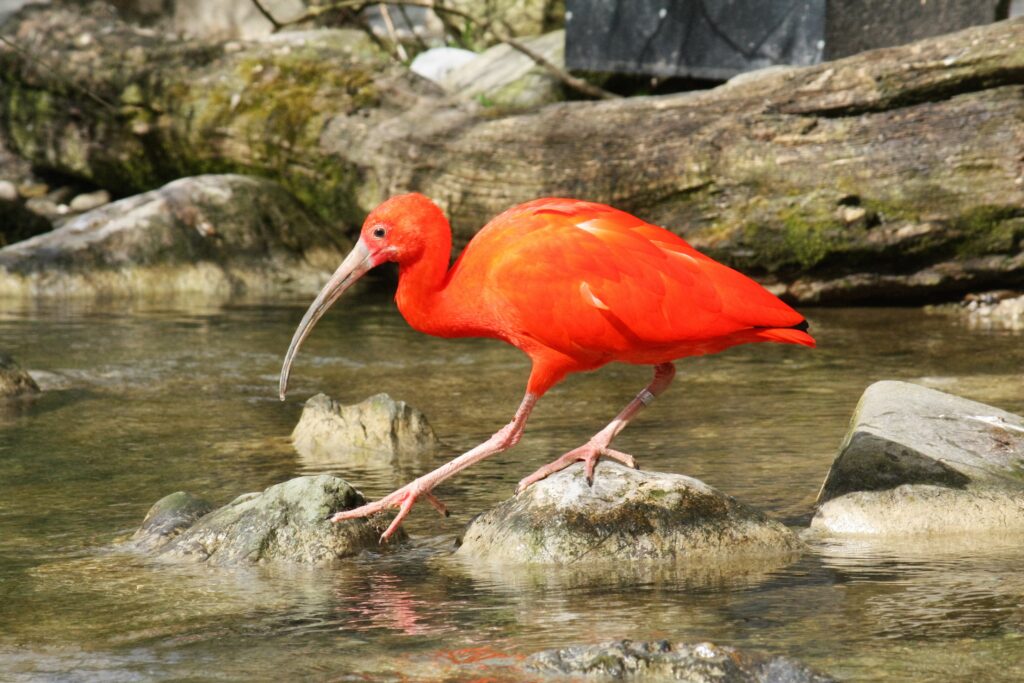 The Scarlet Ibis is a migratory wader bird belonging to the ibis family, which frequents on the islands of the Caribbean and tropical South America.

These birds enjoy legal protection worldwide and are, therefore, increasing in numbers steadily.

The plumage of the Scarlet Ibis is overall scarlet, with long legs and a long, curved beak.

Whether your best color was always red or you prefer the color of an entirely different hue, there is one thing that you should know about a bird with a red breast: it’s beautiful.

Red is the color of passion, when it comes to birds, it’s more. The most favorite and most attractive colors for birds are red, blue, and yellow. Birds with red breasts have many interesting facts associated with them.

Many people find solace in bird-watching. To them, it is a means to reconnect with nature. While bird-watching, when you come across a little red bird flying, doesn’t it just make your day? None of us can refuse the appeal of red.

The next time you watch a red bird flying overhead, make sure you recognize it from the list given above.

That brings us to the end of our article, thank you for reading! I hope I’ve helped you understand that red breasts are not as rare as most people think.

But enough of my blabbering. Now it’s your turn! Let me know how you liked this article and if you’d like to see more articles in the future based on similar topics.

And how about a quick test: Have you ever heard of birds with red eyes?