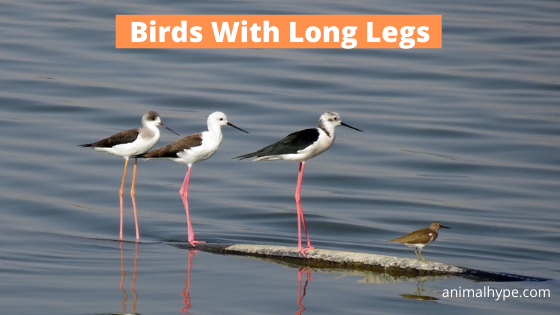 Among the birds, having long legs is a characteristic feature in the Waders and the Shorebirds. Known to live near the water bodies, these birds need long legs to make their way through the water smoothly. They are usually larger in size than the other birds and look more remarkable for it.

In this article, we will take a look at 15 birds you can find in North America who have prominently long legs. 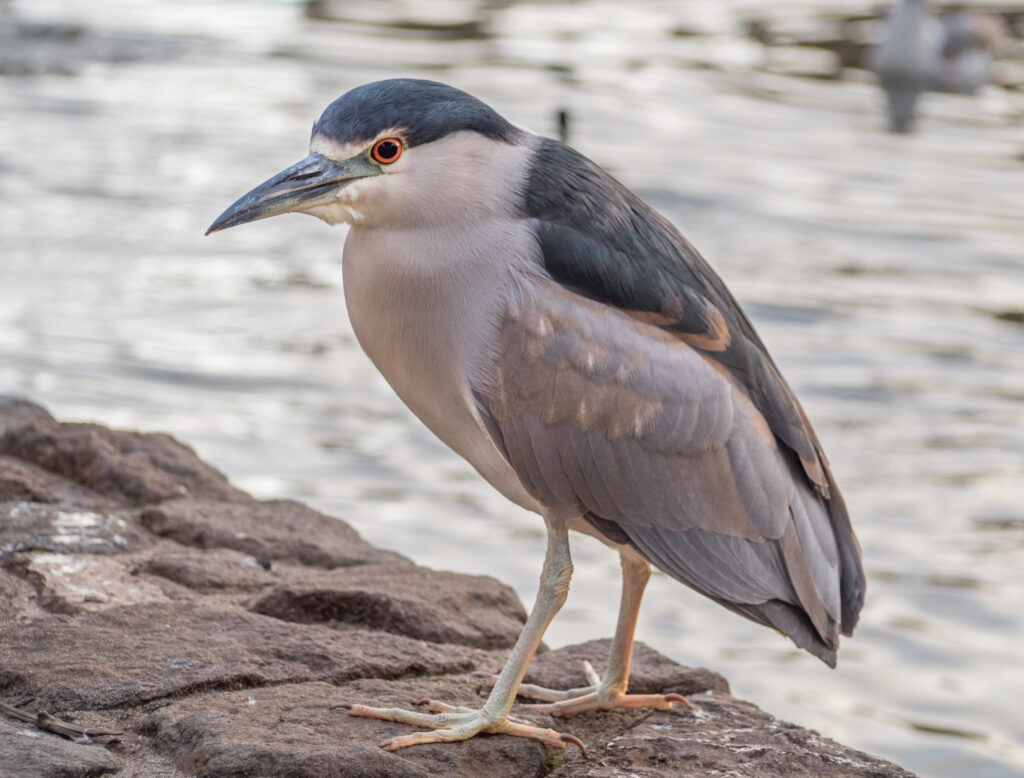 The legs of the Black-crowned Night Heron are shorter than that of the rest of the herons but longer than other birds.

Their neck is thick, with a short head attached to it. Their eyes are flat and yellow in color, with a beak that is rather long and pointed at the edge.

They live in marshes, streams, lakes, and reservoirs. You can call them nocturnal for their tendency to stay hidden between foliage during the day and venture out to forage during evenings or nights. The body of these herons is in a shade of light-grey, with their heads covered with a defined black crown. 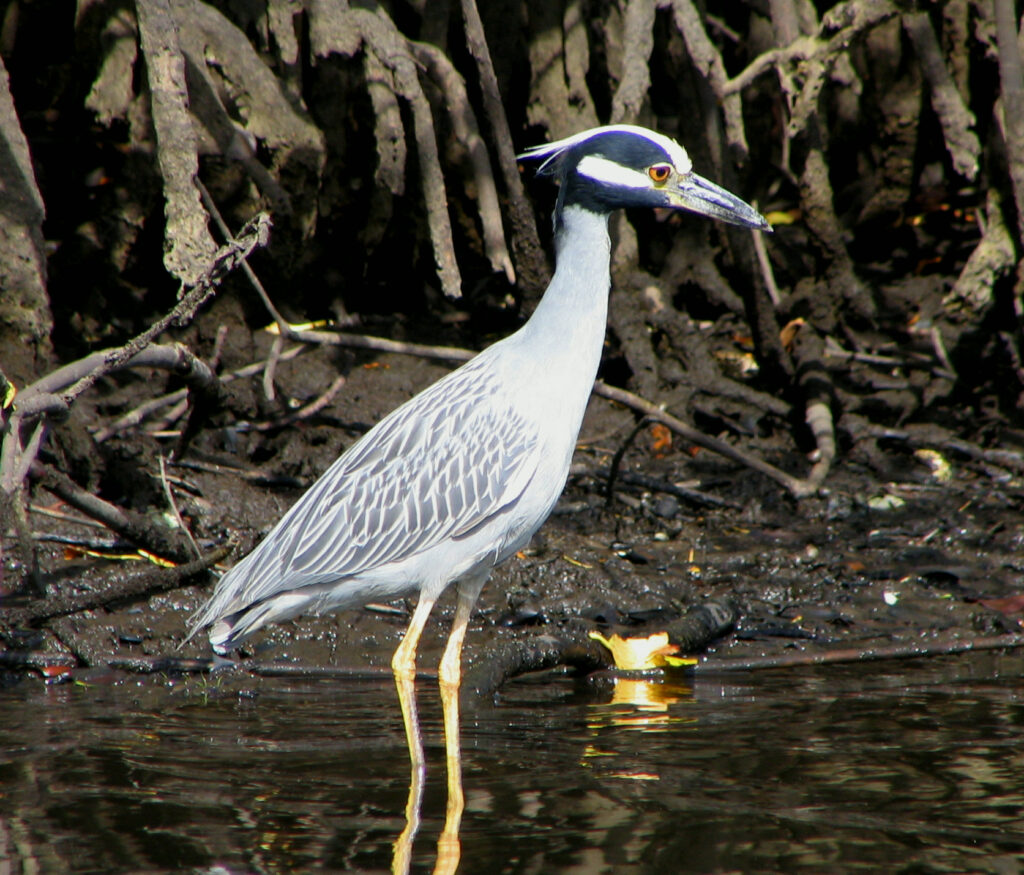 While the Yellow-Crowned Night Herons lack the grace of the other herons, their bodies are covered with a smooth purple-grey color with long, yellow plumes at the back of their head, which lends them a unique elegance.

Due to their diet being heavily dependent on the crustaceans, these herons are most commonly found in the coastal areas.

These herons are also called “crab-eaters” in many areas. Unlike their black-crowned siblings, they like to live in solitary and are much more secretive. 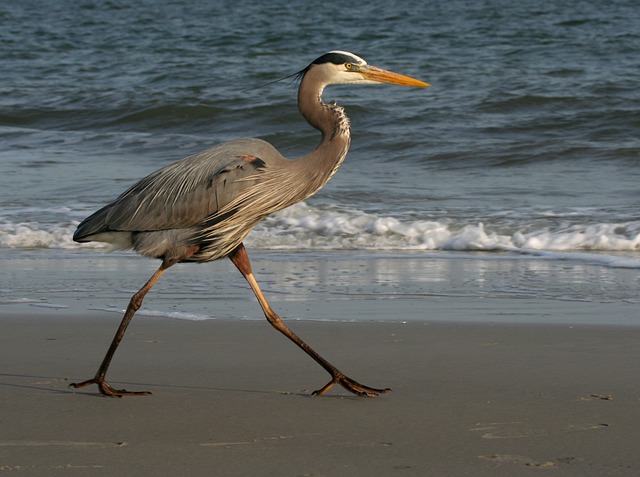 Of all the herons you can find in North America, the Great Blue Herons are the largest. These herons are known for their remarkable fishing skills. They prey on the fish by standing still in the pond or lake for hours, waiting patiently for them to come within their neck range.

As soon as a fish comes close enough, they quickly move their neck and swallow them whole with their razor-sharp bills.

The Great Blue Herons have a varied diet that consists of mice and insects besides fish. While these birds are lone hunters, they are very social on other fronts and live in large colonies. The Green Herons are one of the smaller heron breeds that spend solitary lives in dense greenery or smaller water bodies. Every time they take a flight, they make a distinct “kyow” noise, which works as an indicator for many bird-watchers.

They have finely-colored wings that appear to be dull and dark from afar. However, on close inspection, you will find that the wings on their back are a deep shade of green, with their underparts covered with a rich shade of chestnut.

Due to their smaller bodies, you won’t find them wading as often as the other herons. However, their standing-still game is totally on-point. 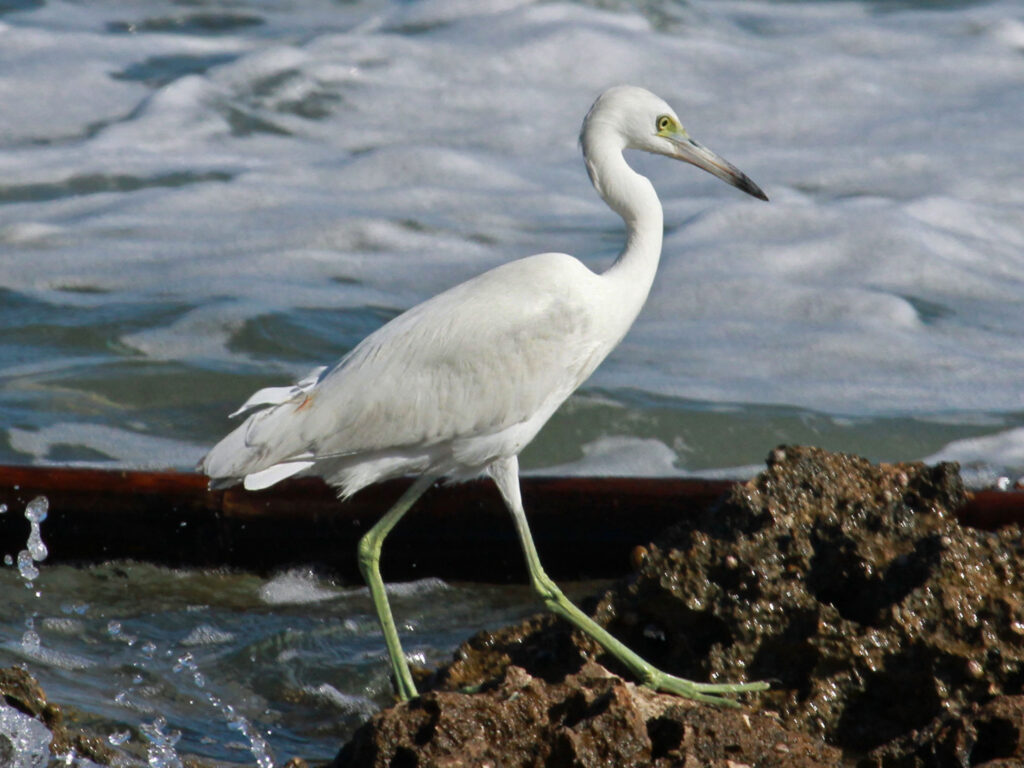 Although these birds have been named Herons, they are more closely related to the Egrets. It is also evident from their scientific name, which begins with “Egretta”.

When the Little Blue Herons are hatched from their eggs, they look very similar to the Snowy Egrets. However, as they grow up, their plumage turns into a slate-blue color.

They wade in shallow waters and grassy fields. Small fish and crustaceans make a large part of their diet, but they can eat tadpoles, snakes, turtles, spiders, lizards, etc., as well. The Little Blue Herons are social birds who often live in mixed colonies with all heron species. 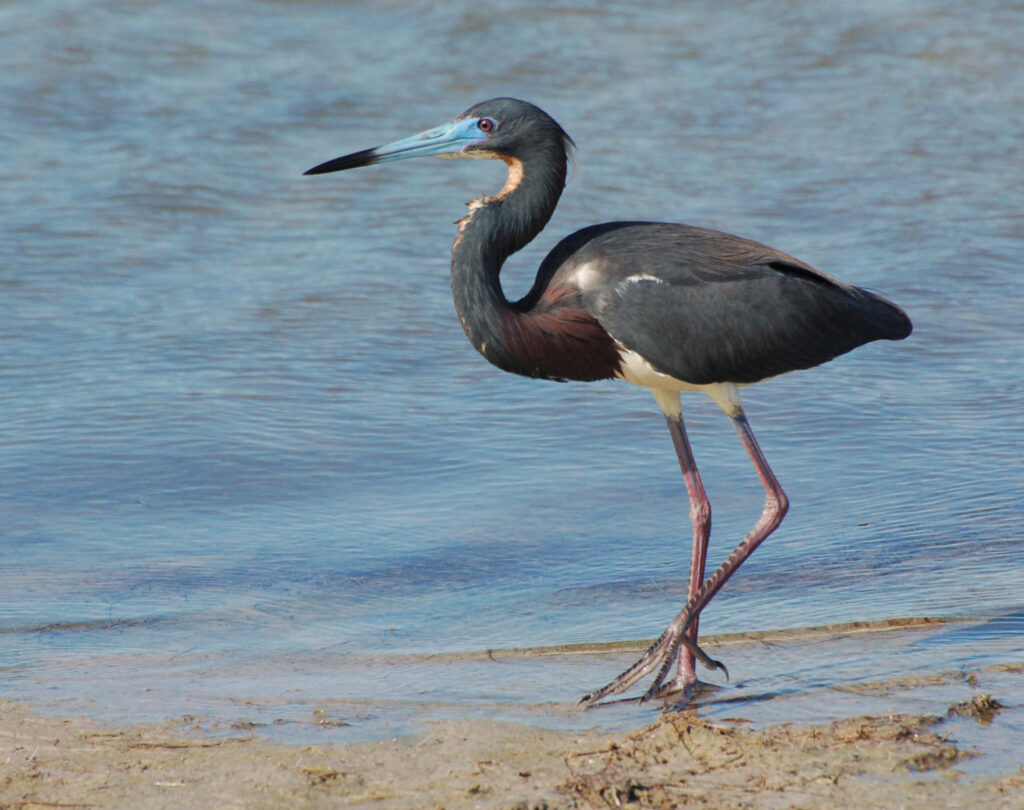 The Tricolored Heron is one of the most beautiful Heron breeds you will find in North America. Almost all of their body is colored in a rich shade of slate-blue, with several reddish stripes on their long neck. In contrast, the underparts of their body are stark white.

However, the real appeal of their beauty is seen in the breeding season, when their bill turns a bright shade of blue with a pointed, black-colored tip, and their neck feathers acquire a purplish shade.

A white crest appears on their head, and their tall legs become vibrant pink. In the breeding season, these herons are a sight to behold. 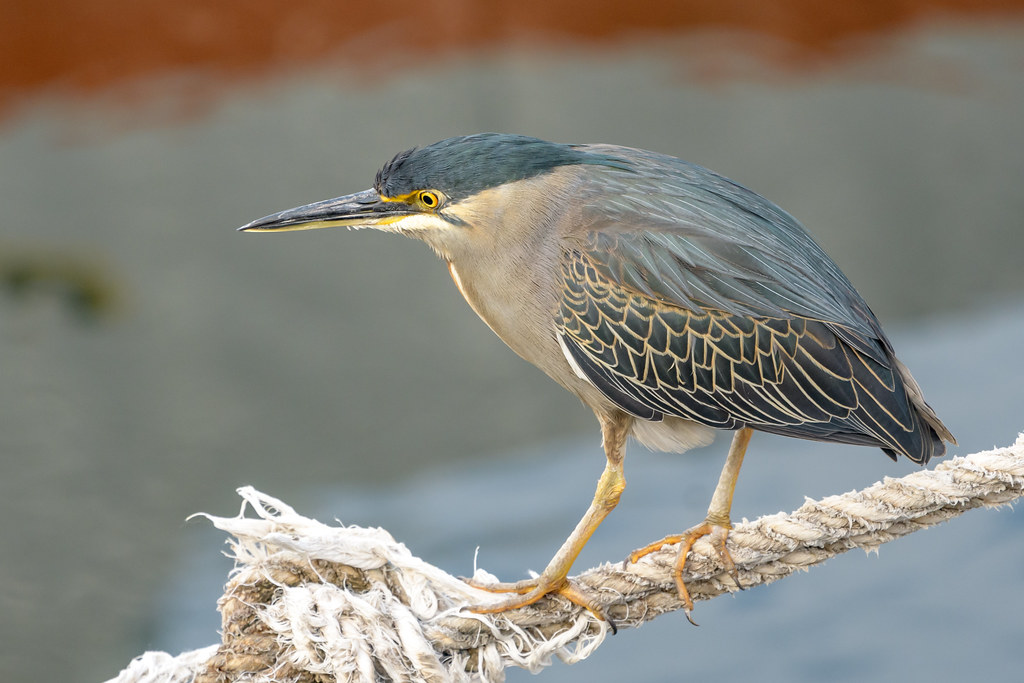 Although the Striated Herons belong to the family of Herons, most of their traits are similar to that of the Bitterns. They are small in size, have an entirely grey body and a drooping breast.

Their legs are usually dull yellow in color but turn into a bright orange in the breeding season. The most characteristic feature of their body is their hunched posture, in which they hunt on their prey. These birds are also known by the names of “Mangrove herons” and “Mangrove bittern”. 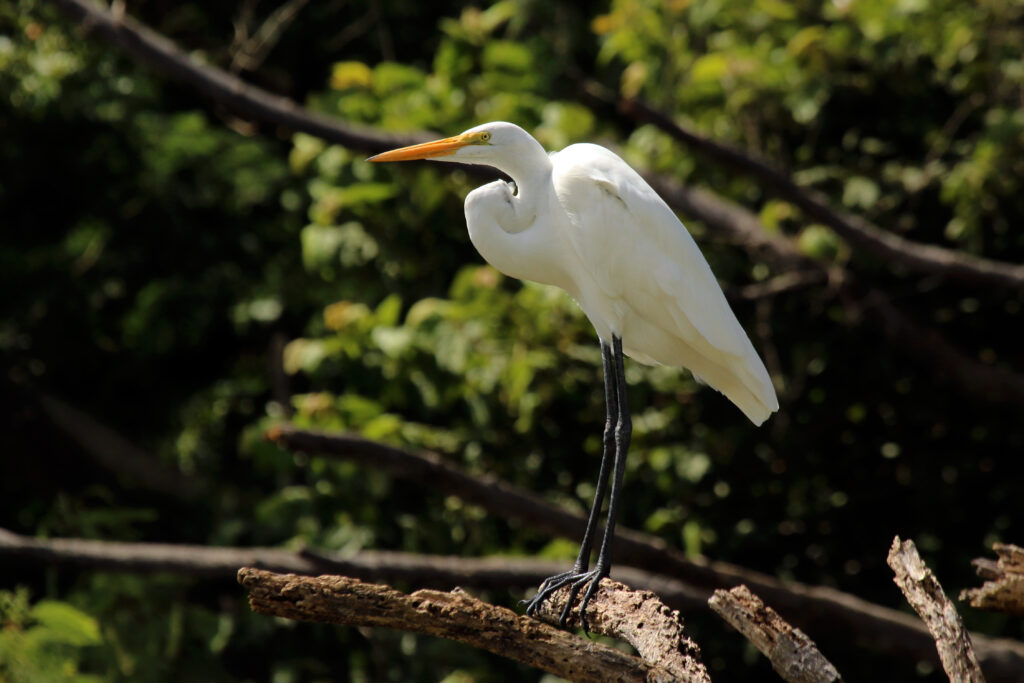 The Great Egrets are large, white birds that are found all over America as well as the world. They are quite popular for their well-formed, S-shaped necks. In size, no other egret species can beat them.

The Great Egrets live both in freshwater as well as saltwater, and are commonly found in wetlands, streams, and ponds.

Fish is their staple diet, but they can feed on amphibians, reptiles, and other small animals as well. These egrets enjoy protection by the Government and are, thus, flourishing in number. 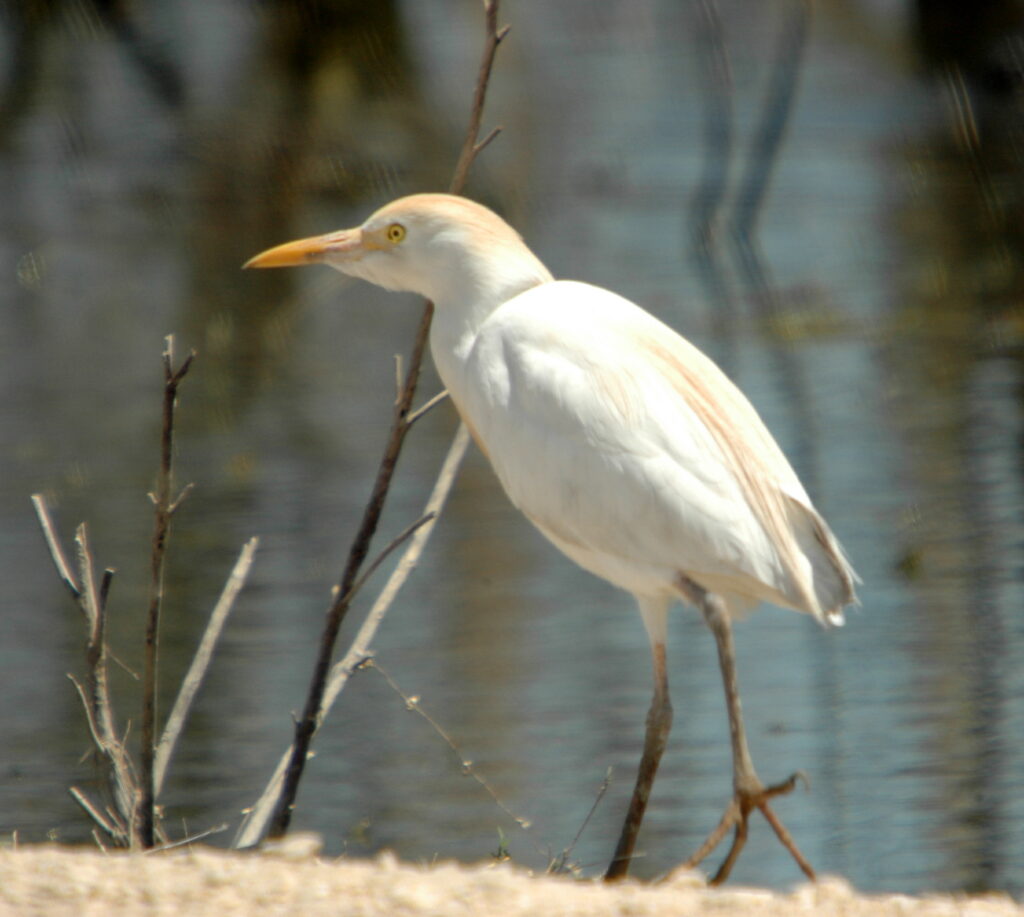 While they are called egrets, the Cattle Egrets are actually herons with long legs and a stout bill. If you go back about 70 years from now, you wouldn’t find any Cattle Egrets in America.

However, today, they are found in abundance all over the continent. The reason these birds have “cattle” in their names is due to their cattle-like behavior. Instead of wading in water bodies like other herons and egrets, they like to forage on the dry land like cattle animals such as cows.

As a result, their diet consists of all kinds of insects they can find on the grass. 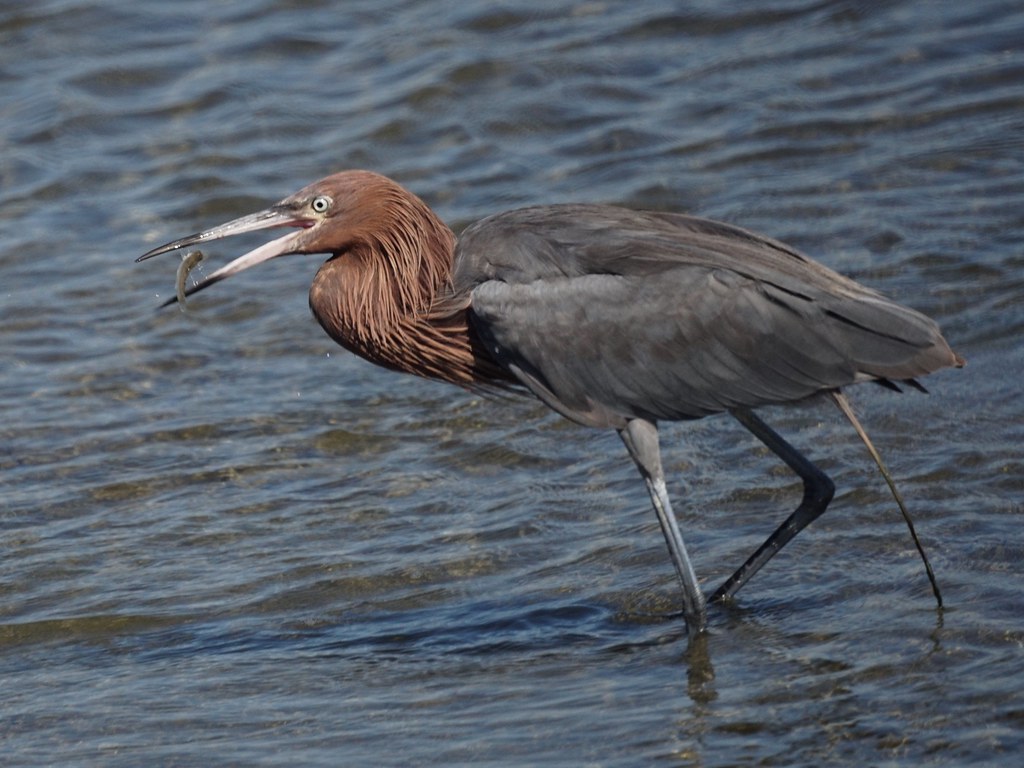 The Reddish Egret is one of the rarest species of Egrets in America. In the 19th century, their population took a severe toll due to the plume-hunters and had not fully recovered yet.

Another threat to these egrets is the loss of their habitat due to climate change. You can easily distinguish them from the other egrets by their hyperactive feeding pattern.

Their shaggy neck and dual-toned bill set them apart as well. Reddish Egrets are highly social birds, but maintain a strict territory while hunting. 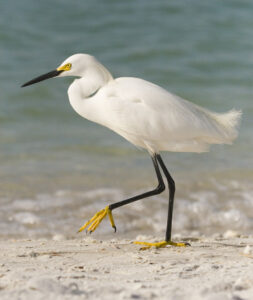 Although the Snowy Egrets are small birds, their royal white appearance lends them an elegant touch. They wade in shallow waters and have bright yellow feet, which is why they are often said to be “dancing in the shallows on golden slippers”.

In the 19th century, the Snowy Egrets were slaughtered on a large scale for their plume. However, the protection act for them has resulted in their fast-growing population.

The graceful appearance of these egrets contrasts with their shrill, raucous voice. They feed on fish, crustaceans, and insects. 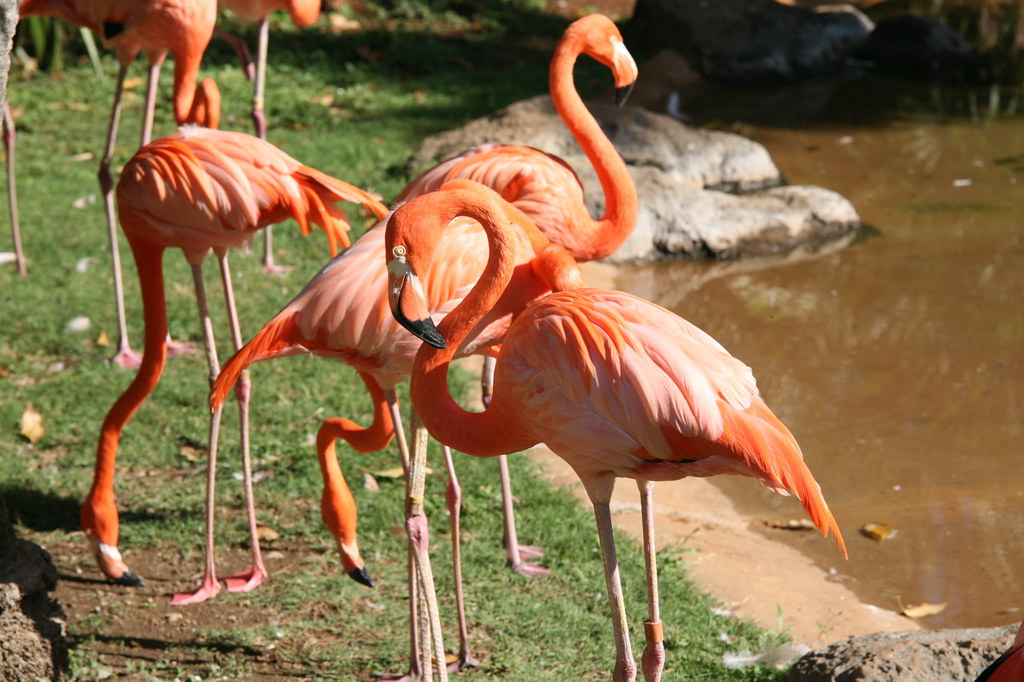 Closely related to the Chilean Flamingo, the American Flamingos are a large flamingo species that are native to America.

What sets these flamingos apart from the other flamingo species is their brightly-colored plumage that occurs in deep pink, orange, or red.

When they are newly hatched, their body is a dull grey. However, as they grow up, their plumes change color remarkably.

Known for their social skills, the American Flamingos live and feed in large colonies. They are generally shy but can get aggressively protective of their hunting territory. 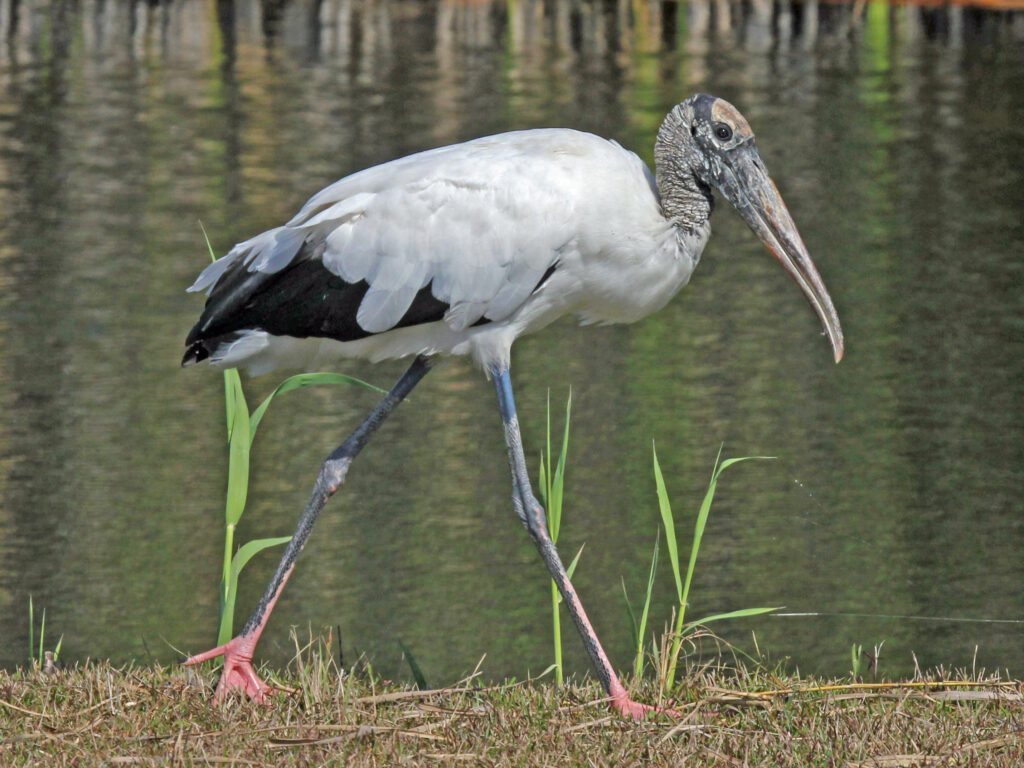 The Wood Storks were initially called “wood ibis”. However, since they are not actually ibis, their name was later changed. You can easily recognize these birds because of their prominent bill and featherless head. Their bill is not only prominent in appearance but also in its fishing technique.

While fishing, the Wood Stork bends down and sticks its beak in the water. They stay like that until one of the fish comes within the range of the beak, and then they snap it shut in as little as 25 milliseconds.

The Wood Storks eat only small fish, but they eat so many of them that you’d be surprised. During the breeding season, a single Wood Stork can eat up to 400 pounds of fish. 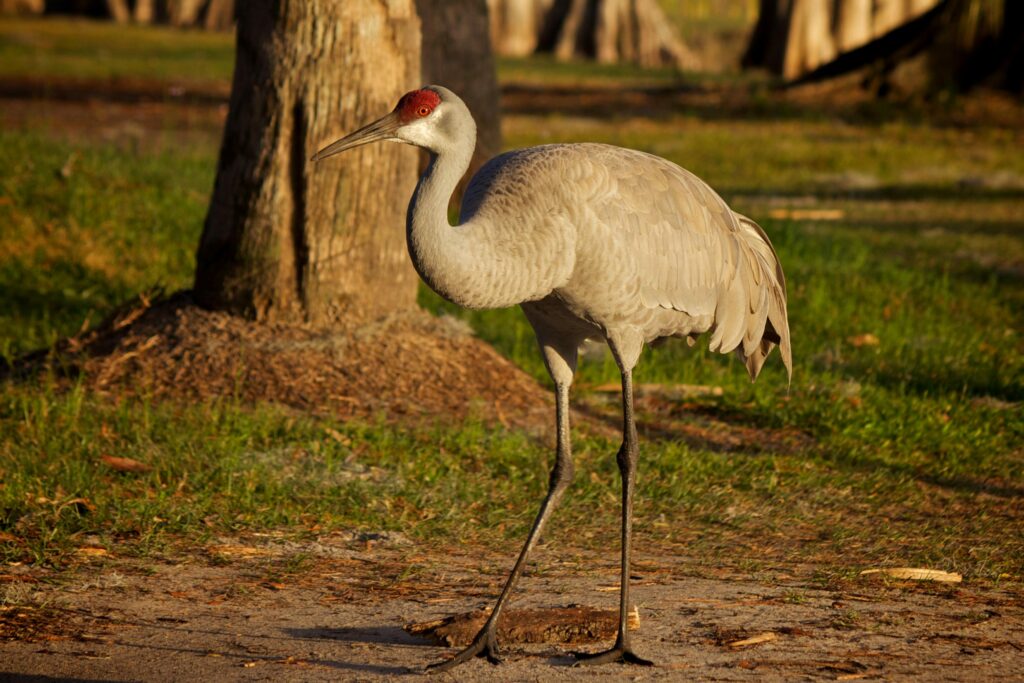 The Sandhill Cranes are found in every corner of the world, including America. These cranes often live in the wetlands and are opportunistic eaters.

Being omnivores, they enjoy eating plants as much as reptiles, rodents, and insects. They are overall grey in color, with a crimson crown on their heads. Their beaks are long and pointed, while their neck is straight.

These cranes are known for their loud trumpeting calls, often used for communicating with their mates. 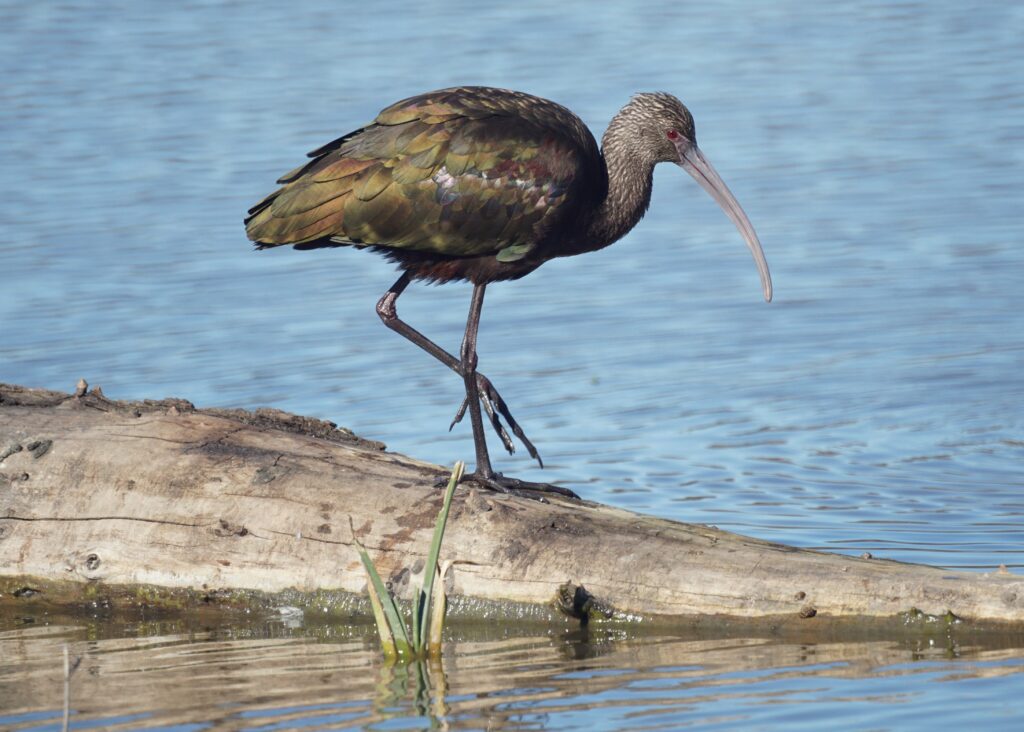 The White-Faced Ibis is very similar to the Glossy Ibis in appearance. The overall color of these birds is bronze, with a long, pink bill that curves downwards prominently.

Their eyes, legs, and feet are all red. They feed on fish, amphibians, and invertebrate animals. White-Face Ibis are social birds who live and move in colonies. They forage in shallow water and often pick out worms from the mud.

The birds who have long legs not only find it easy to make their way on watery surfaces but also look graceful. Moreover, when these birds take a flight with their wide wingspans, they are a sight to behold. If you are interested in bird-watching, you must know about these long-legged birds you are likely to come across in America.