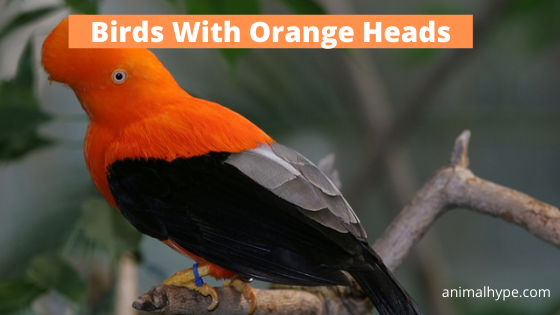 We have heard about birds with white, black, and red heads. But how often do you come across a bird which has an orange head? Even if you haven’t seen such a bird yet, you must know that orange-headed birds do exist. In this article, we will take a look at 14 birds that have orange heads. Until recently, the Bullock’s Orioles were not recognized as a distinct species but were instead grouped together with the Baltimore Orioles to be known as the “northern orioles”. They have been named after the amateur English naturalist, William Bullock, and belong to the family of Icterids or New World Blackbirds.

These birds are endemic to the western parts of North America but are believed to be seen as vagrants in the eastern parts as well. They prefer to reside in scrub forests and deciduous woodlands.

Being sexually dimorphic, the Bullock’s Oriole males have a bright orange body wing black tail, patches, and white wing bars. The females look duller in comparison and have grey-brown wings and upperparts, and yellowish-white breast and underparts. 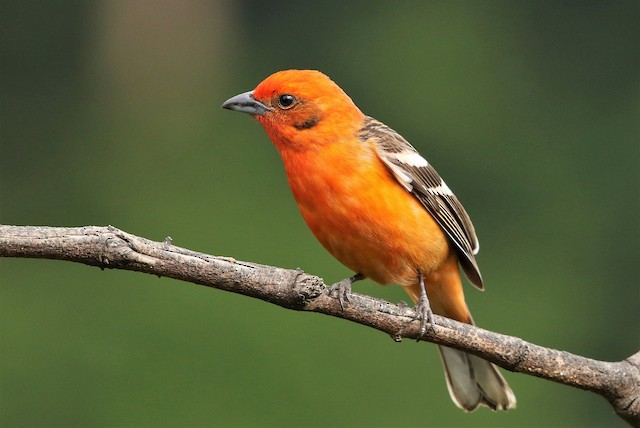 The Flame-colored Tanagers were formerly known as “stripe-backed tanagers” and belonged to the tanager family. However, recently, based on their similarities with the cardinals, they have been placed into the cardinal family.

These little birds nest in the treetop canopies in the mountain forests, preferably orchards, using rootlets, grass, and conifer needles. They inhabit the mountains of Mexico and Central America and are occasionally seen in the United States.

Both the male and female Flame-colored Tanagers have a bright orange, with grey-brown wings and tails streaked with white and yellow. Their eyes and beaks are black as well. Although they are sociable birds, these tanagers get very aggressive when it comes to sharing food. 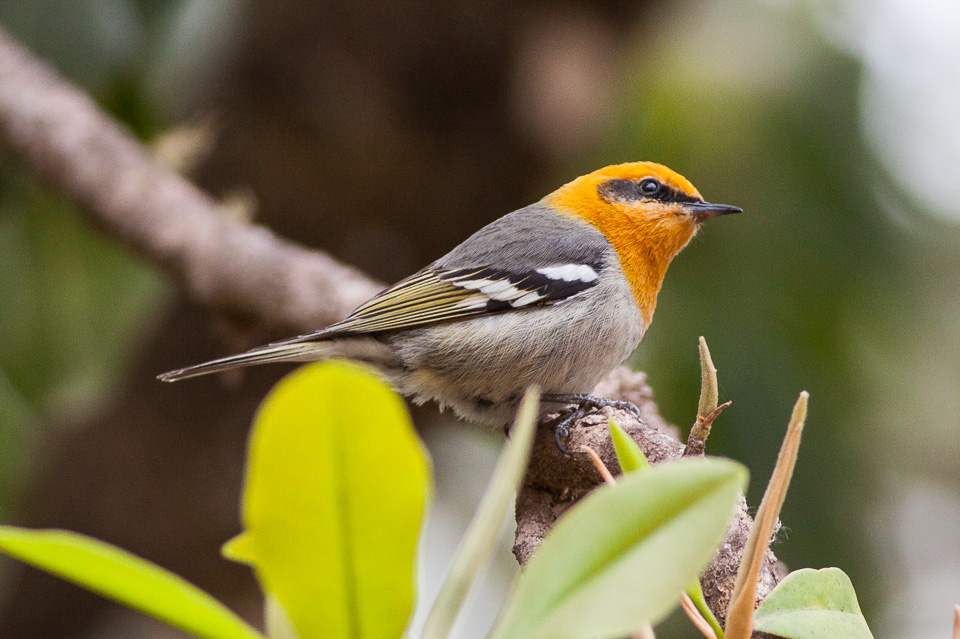 The Olive Warblers are small passerine birds who are also called “ocotero”. The family of these birds is native to North America. They breed throughout southern Arizona to Nicaragua. Although it is believed that they are non-migratory, they do leave their hometown in November, only to return in late February.

The Olive Warblers are medium-sized birds with long wings. They have grey underparts and plumage, with one essential difference between the sexes.

While the males have an orange-colored head, the females and their younger ones have a yellow head. They are insectivores who mainly feed on insects and other arthropods. They like to feed on the larvae of the tortrix moths.

The Northern Red Bishops are also known as “orange bishop” due to the color of their heads. These birds are native to Africa and are among the larger passerine birds. Their species was first discovered in 1789 in Ghana by the German botanist, Paul Erdmann Isert.

The Northern Red Bishops might be small in size, but their body is rather plumpy. The breeding males have a black crown, beaks, flanks, belly, and a black spot around their eyes.

Their tail and upper wings are brown in color, while the rest of them is orange in most cases. However, there are some instances where these birds have a darker plumage as well. This is because the color their bodies acquire is highly dependent on their diets.

The female Northern Red Bishops don’t share these qualities of their male counterparts and look similar to sparrows with their dull brown body and wings. The non-breeding males share this appearance as well. 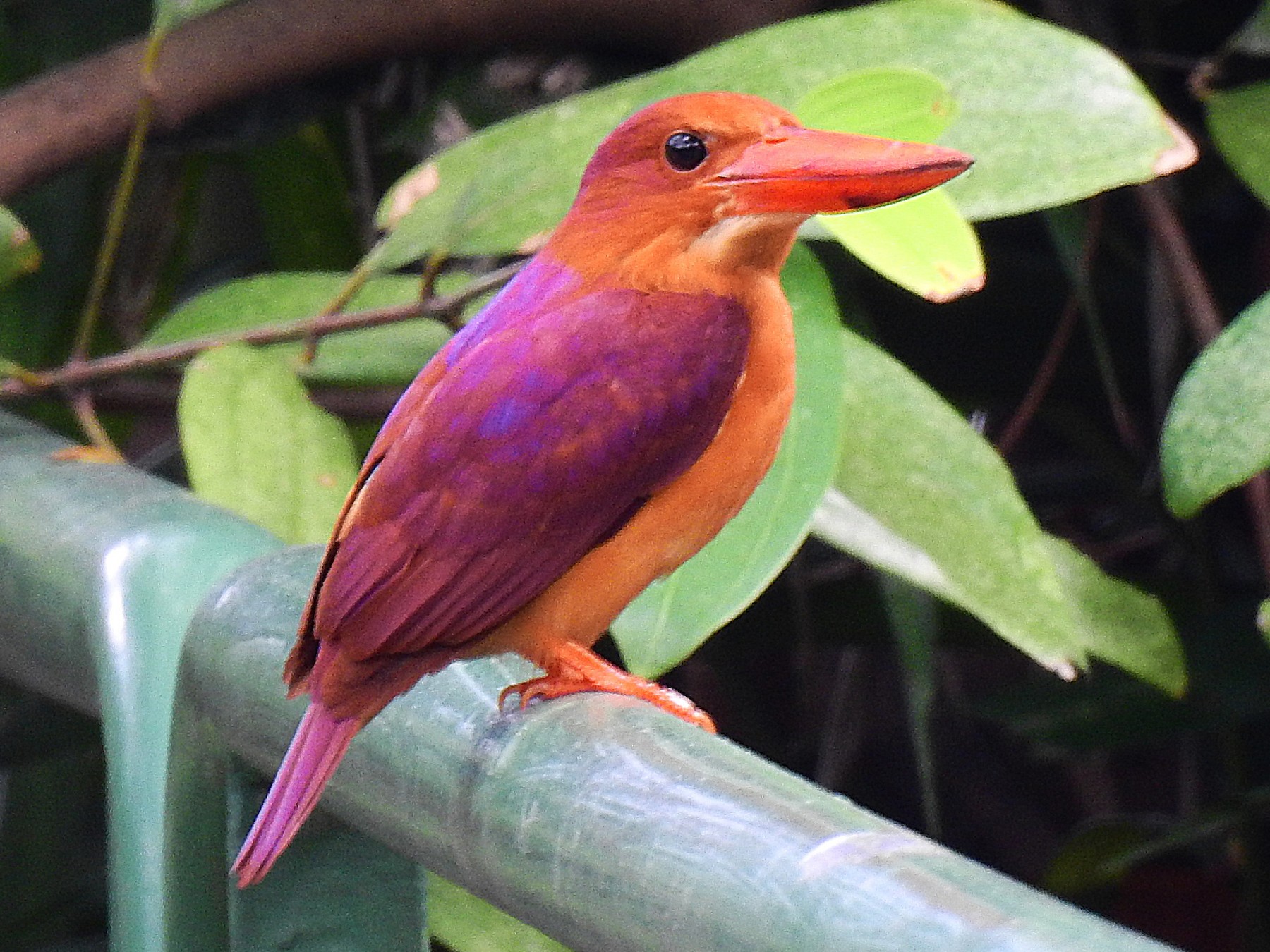 Belonging to the subfamily of Halcyoninae, the Ruddy Kingfishers are a species of wood kingfishers who are known for their remarkably large bills. These migratory birds are locally found in east and southeast Asia.

They breed across South Korea to Japan in the north, India, and China in the west, and through the Philippines to the Sunda Islands in the south. During winters, they travel south towards Borneo.

The Ruddy Kingfishers have a rusty red body, with their tail deepening to a shade of purple. Their enormous beak is bright red in color and helps them in catching fish. Their legs have the same coloration as the bills.

Although they were earlier included in the Threatened Species List by the IUCN, in 2006, they were declared to be shifted to the Least Concern List. 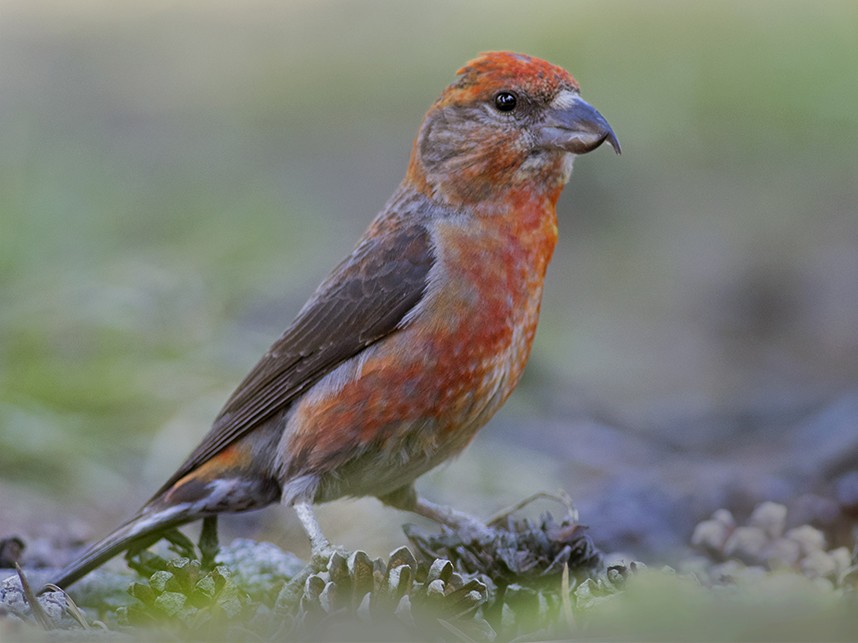 Native to the Albion mountains of Southern Idaho, the Cassia Crossbills are small passerine birds who have unique bills that are specifically designed to access the lodgepole pine cone seeds. However, when given a regular pine tree, these birds often fail to extract the seeds.

Although these birds were first sighted in 2009, it wasn’t until 2017 until they were declared to be a distinct species.

They have as many as 10 different call types, a feature that is also found in the Red Crossbill. Besides, the two species have a similar appearance as well.

The males have a reddish-orange body with brown wings. The females, on the other hand, have an olive-yellow body with similar wings.

Since their short beaks are accustomed to the lodgepole pine trees, they inhabit areas with an abundance of these trees. 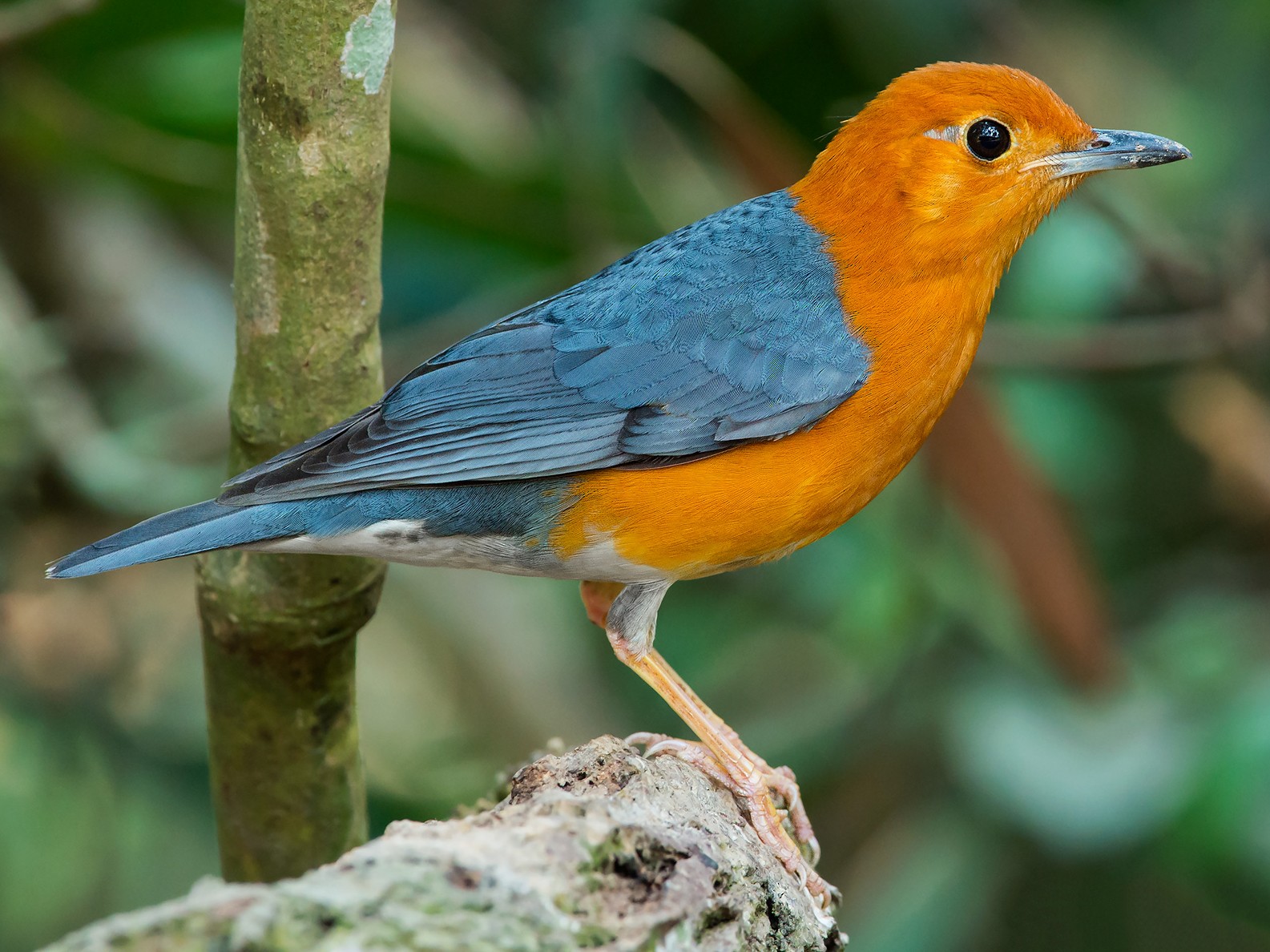 Commonly found in the wooded areas of southeast Asia, the Orange-headed Thrushes are small birds belonging to the Thrush family. They were first discovered in 1790 by the English naturalist John Latham.

Their face and head, although orange, have a slightly rufous tone to them. The combination of orange and grey plumage sets these birds apart from other bird species. 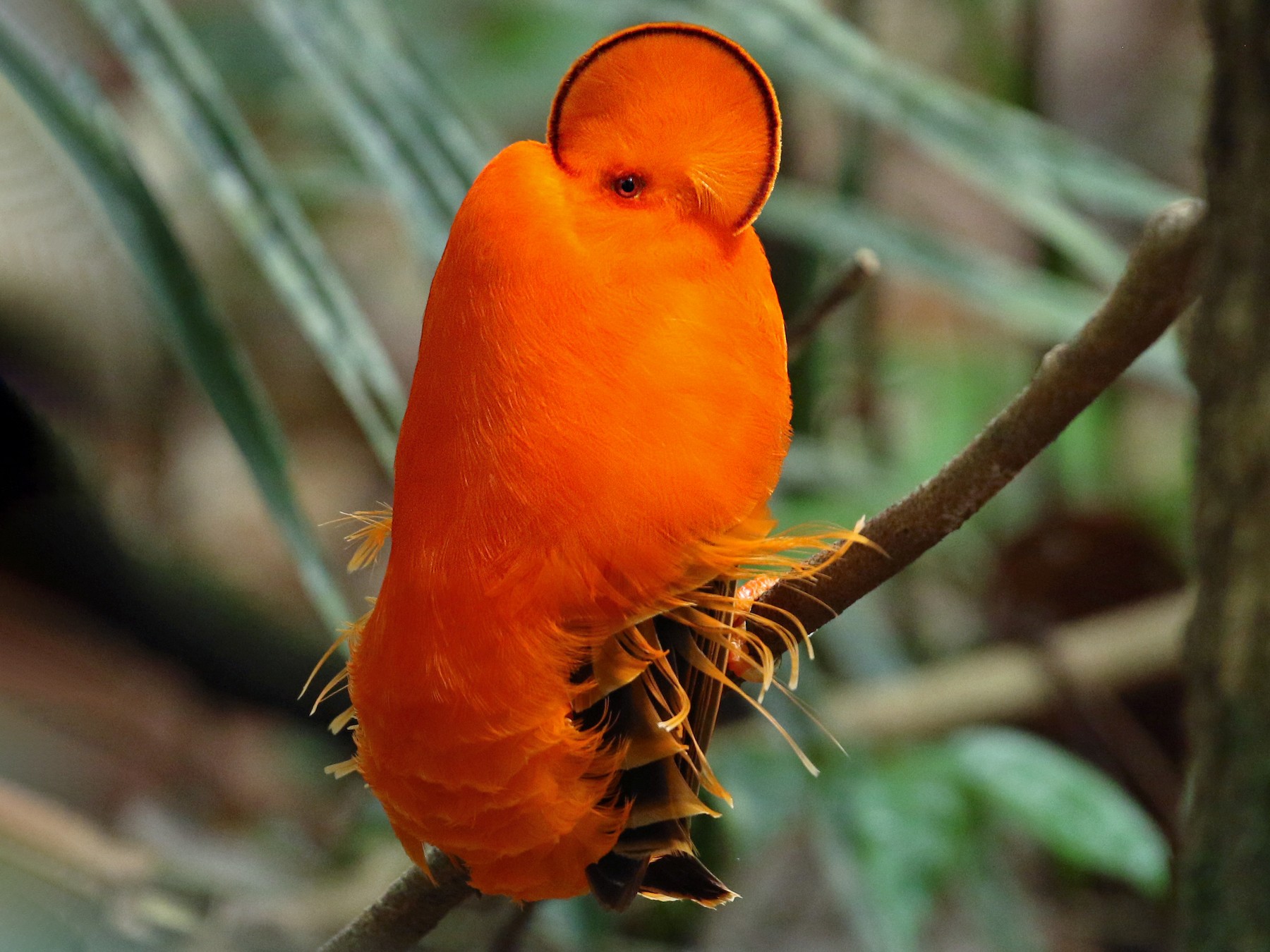 Native to South America, the Guianan Cock-of-the-rocks are passerine birds belonging to the species of Cotinga.

Due to their love for rocky outcrops, these birds mostly live in the tropical rainforests. You can find these birds in the thickly-forested areas of South America. They have a brightly-colored orange body with a crest shaped like a half-moon atop their heads, which is also orange outlined thinly with black.

Although the diet of the Guianan Cock-of-the-rocks heavily depends on fruits, they do not shy away from eating lizards or small snakes. In turn, these glorious birds end up becoming prey to the Black-and-white Hawk and Harpy Eagles.

The ‘Akepas are one of the few birds who belong to the family of the Hawaiian Honeycreepers and were included in the Threatened Species List by the IUCN in 1975.

These birds are now found only in a handful of locations in Hawaii, namely, the Hakalau Forest Wildlife Refuge, on the northern slope of Hualalai, and in the upper forests of Kau.

The males have an overall bright orange body, while the bodies of the females have a greenish-yellow. Both sexes possess a small crossbill, which is characteristic of all the Hawaiian Honeycreepers. 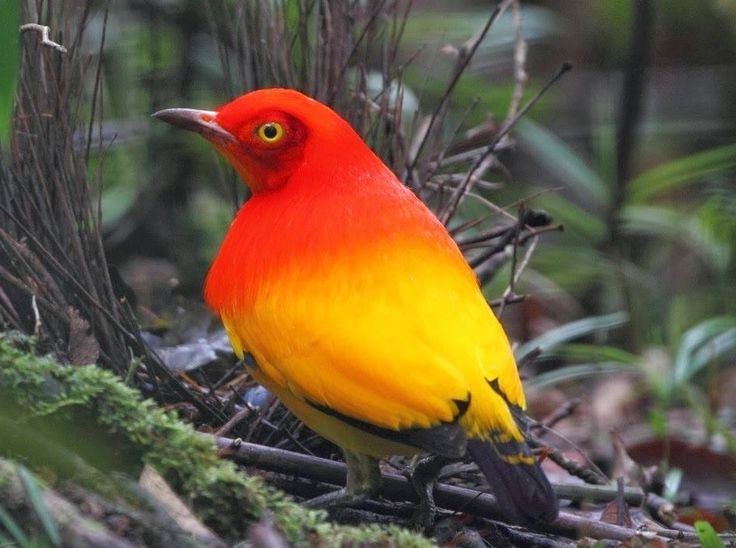 The Flame Bowerbirds are native to the New Guinea rainforests. Of all the bowerbirds, they are the most brilliantly-colored. Like most birds, the males are more attractive than their female counterparts.

They have a short, yellow bill, and yellow irises. Their heads and necks are orange and slowly blend into yellow downwards, ending in black tails. The females are olive-colored with golden below.

To court the females, the males twist their tails and shake their bodies several times. However, the courtship doesn’t always end in mating. 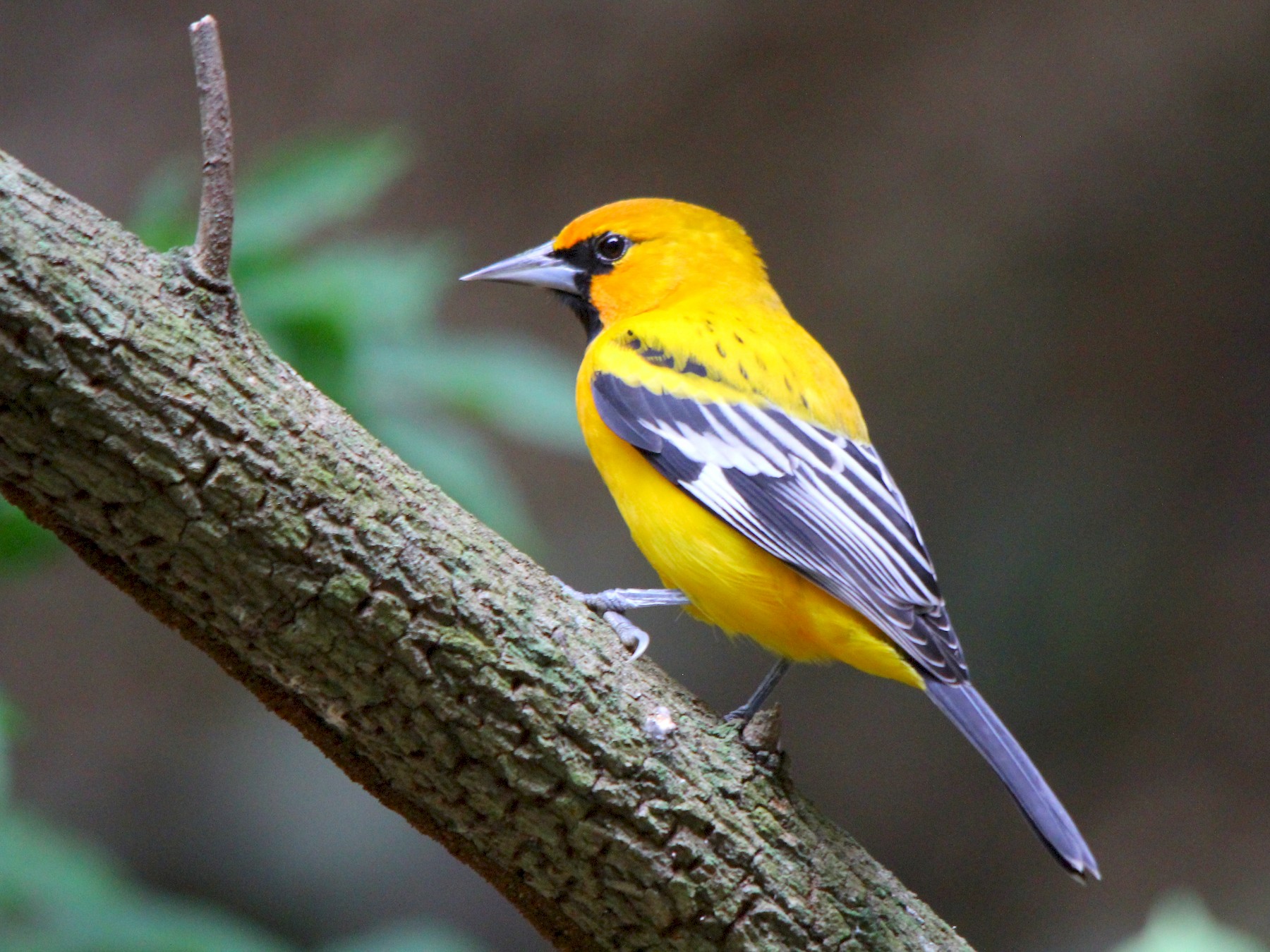 The Streak-backed Orioles are passerine birds who belong to the family of Icterids or New World Blackbirds. Endemic to Mexico and Central America, these birds seldom pay a visit to the United States.

You can find them in Mexico, El Salvador, Guatemala, Nicaragua, Honduras, and Costa Rica. They inhabit the savannahs, grasslands, woodlands, and shrublands, and are keener on eating spiders and insects rather than fruits or nectar.

They have a sharp and shiny bill that is blackish in color. Their heads are a shade of bright orange, which slowly fades into a lighter shade downwards. They have a black eye-mask, yellow feathers with black and white streaks, and faded brown feet. People often confuse these birds with the Hooded Warblers. 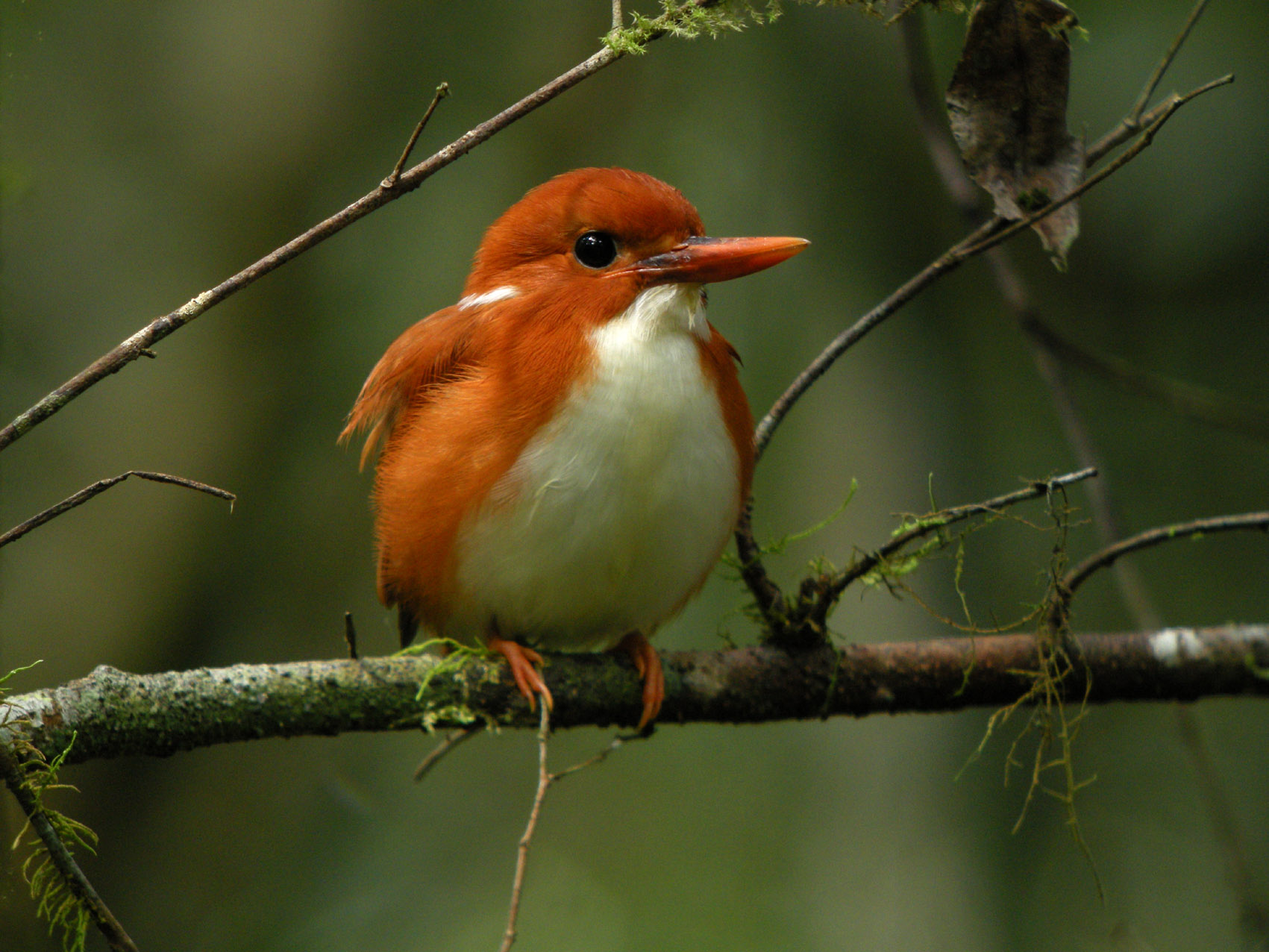 The Madagascan Pygmy Kingfishers are members of the River Kingfisher family. These birds have been named after the place of their nativity, i.e., Madagascar.

They are small, stocky birds that have an overall mute orange body with white underparts and a large, orange bill that seems quite large for their small bodies. Their eyes are large and black.

These birds were first formally described by Carl Linneaus in 1758 in his book “Systema Naturae”, 12th edition. In the book, they have been mentioned under the scientific name of “Alcedo madagascariensis”. 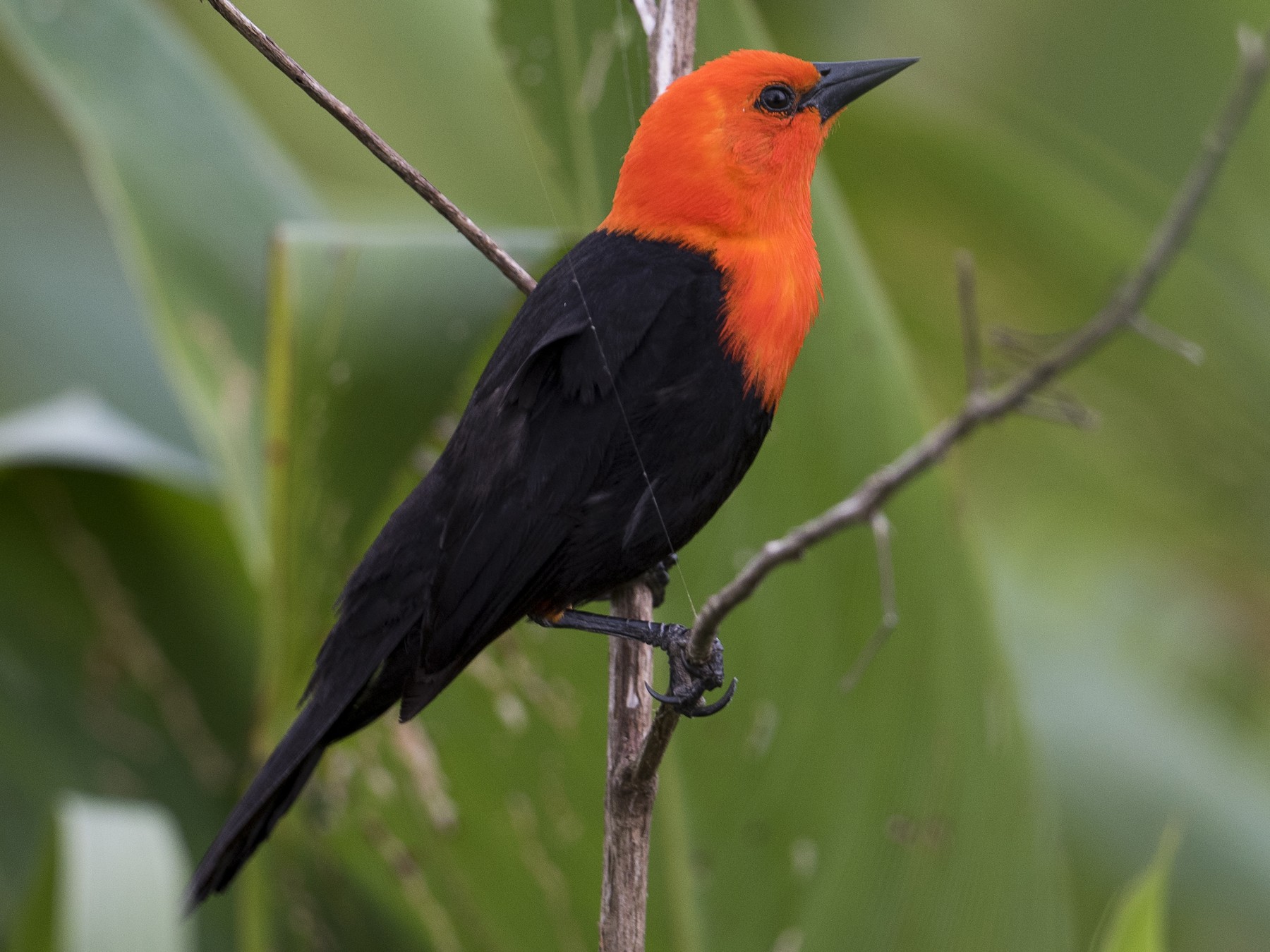 The Scarlet-headed Blackbirds are a member of the family of Icterids or New World Blackbirds. Like all other blackbird species, these birds have an entirely black body with the exception of an orange head.

Their long, slender beaks, which are jet black, are uniquely shaped and look slightly upturned. They breed in Paraguay, Uruguay, Argentina, and southern Brazil.

The Scarlet-headed Blackbirds use their uniquely-shaped beaks as a hammer to open up their food. In nature, they are social and maintain monogamous relationships.

The Andean Cock-of-the-rocks are passerine birds belonging to the family of the cotinga birds. They are also referred to as “Tunki” by the locals and are endemic to the Andean cloud forests in South America.

These birds have a significant sexual dimorphism. The males have an orange upper-body and a jet-black lower body.

They also have a disk-like crest present atop their head on the front. The females, on the other hand, have a muted brown body with darker wings and lack the crest. They are regarded as the national birds of Peru.

It is true that birds that have an orange head are rare to come across. But that is precisely the true joy of bird-watching: to find a bird so unique that you’ve never seen anything quite like it before. If you ever happen to encounter such a bird in the future, you will know which bird is it.