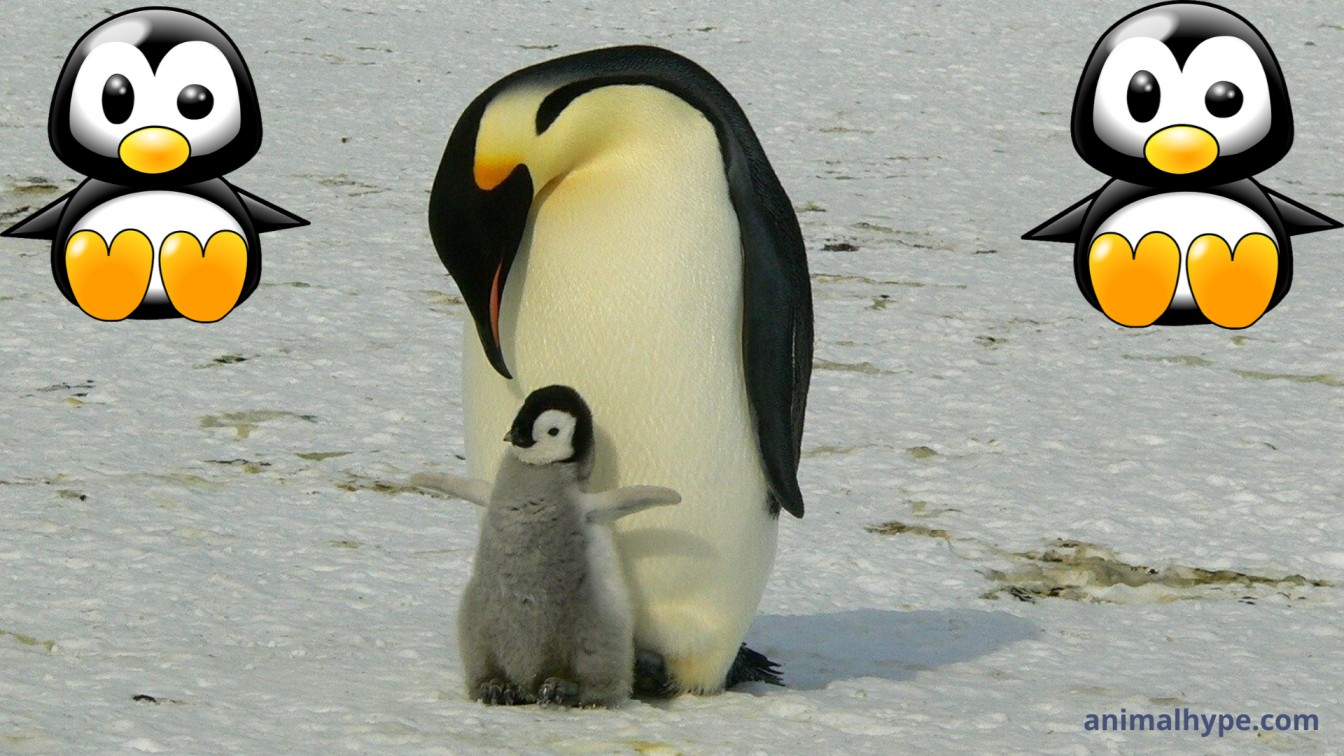 Penguins are a truly wonderful creation of nature. I say this not only because of their elegance or irresistible cuteness but also for how penguins as a species have adapted themselves to survive in the unforgiving terrains of this planet and for being the only species of birds that are highly adapted for aquatic life.

Though penguins fall under the zoological category of birds, they do differ a lot from the birds that we generally see around.

In this article, we have compiled a list of cute photos and videos of baby penguins and some interesting facts about them that will make your jaw drop! Apart from these, we have also covered the frequently asked questions about baby penguins.

A baby penguin is called a chick! 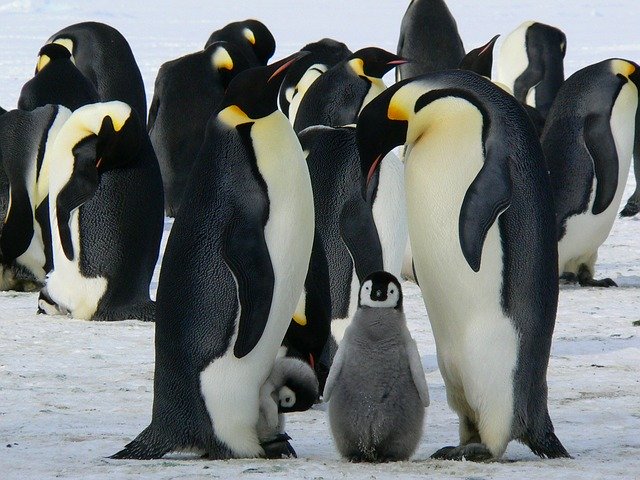 As said earlier, though penguins do not resemble birds in any manner, they do fall under the category of birds. For this reason, baby penguins, irrespective of their gender, are called chicks.

Sometimes they are also called nestlings. But yeah, no one calls them chicks or nestlings because of their irresistible cuteness, and most people prefer calling them baby penguins. They are referred to as chicks or nestlings only in research papers or other technical documentation. 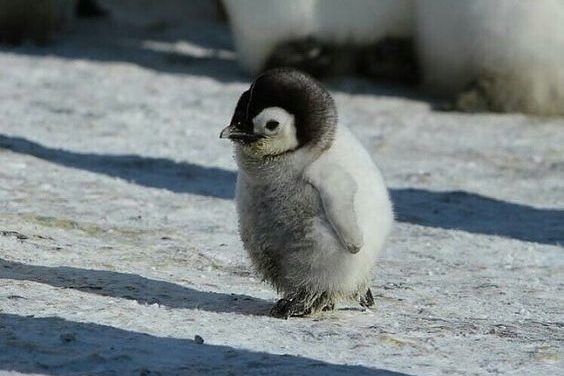 The first thing that pops into our heads when we hear the word penguin is their iconic black and white color. But did you know that when baby penguins are born, they are fully covered in white, grey, or brown?

To better understand this, let us have a look at how an adult penguin’s plumage color helps them. Let us take an example of a chinstrap penguin that has a grey plumage on the head and body while black on throat and their wings.

This unique coloring of an adult penguin’s body is a mode of camouflage known as countershading. 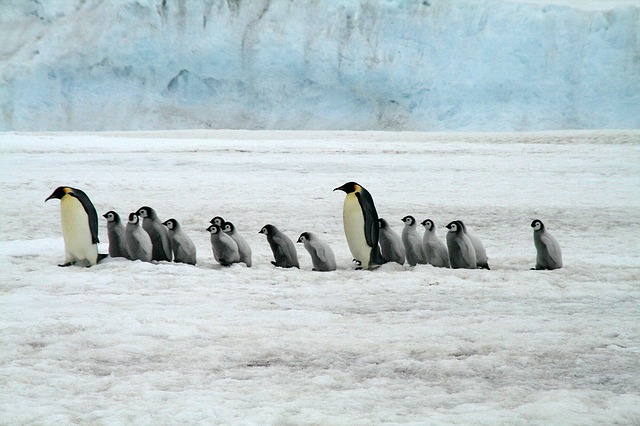 As said in the previous section, a baby penguin is born covered in grey, white, or brown plumage.

By the time these babies are 1-year old, they would have developed the strength and coordination to take care of themselves and to hop over the steep rocks or glide through icy areas of water to hunt on their own.

When the baby penguins are old enough, their parents will leave them once and for all, leaving them all by themselves. It is when these babies begin to molt.

If you didn’t know, a baby penguin has a downy feather compared to an adult penguin. Before these babies begin molting, they start growing the feathers similar to that of an adult underneath.

These adult feathers are different from that of the downy feathers they initially had. The new feathers have a dense bottom layer that provides the penguin adequate warmth to survive in the harsh winters and a top layer that is interlaced to give them enough waterproofing. 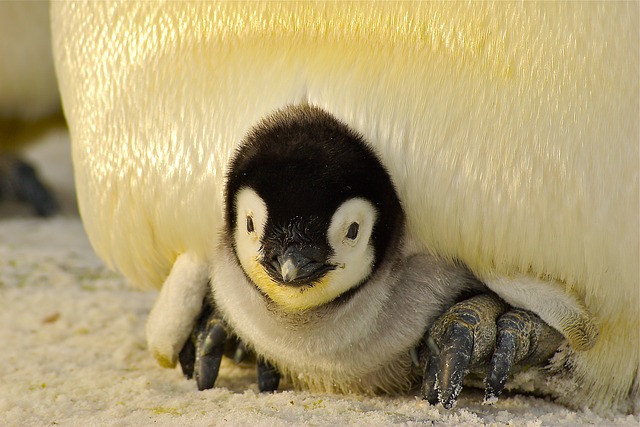 Baby penguins are dependent on their parents for their survival for up to the first 12-13 months after they hatch. Penguin parents are known for being so attentive when it comes to taking care of their young.

As said in the previous sections, penguin parents take turns to take care of the eggs.

These parents are so dedicated that if one of the partners doesn’t return, the one standing guard for the egg can starve for up to 3 weeks and take care of the egg.

Only when they are about to starve to death, shall they leave the egg and go on search of food. If you didn’t know, penguins live in colonies and all of them have the same mating cycle.

This means that the eggs in the colony hatch almost at the same time. These newborn babies are helpless and are fed by their parents. An adult penguin feeds the baby in 3 ways.

The adult penguins that go out foraging will hunt down squids, small fishes, or scrape out krill from the ice and store it inside their stomach.

By the time they come back to the shore, the food must have digested adequately. It is rather interesting to note that the parents can identify their young from their cries.

The parents then cough the food back into their mouth and then pours the mixture to the baby’s mouth.

When the babies are old enough and their digestive system begins functioning properly, the adult penguins store food inside their stomach by freezing it.

For instance, it may swallow a fish and then keep it in specialized chambers inside the stomach without digesting it. The specialized enzymes in its body ensure that the food remains as such for several days.

Some breeds of penguins choose to feed their young digested food. In that case, the penguin may completely digest the food and convert the nutrients in the food to an oily form, called the penguin milk. This liquid is then fed to the babies once the adults are back.

Penguins can identify its partner from a group

Penguins take turns to take care of their babies. While one of the partners takes care of the baby, the other goes out foraging. These penguins swim for miles in the ocean in search of food, and they need to come back in time to feed their babies.

But the real problem lies in identifying their baby. As said earlier, penguins breed in groups and they live in large colonies.

There may be around 2000 penguins in one colony, and it isn’t an easy task for them to correctly identify their baby.

For this, the adult penguins that are taking care of the babies walk in lines that resemble an identification parade.

The penguin with the food walks past each of them, making noise that their partner can identify. Once the partner has identified the unique cry of its mate, he/she will respond. That’s how the penguins identify their young. 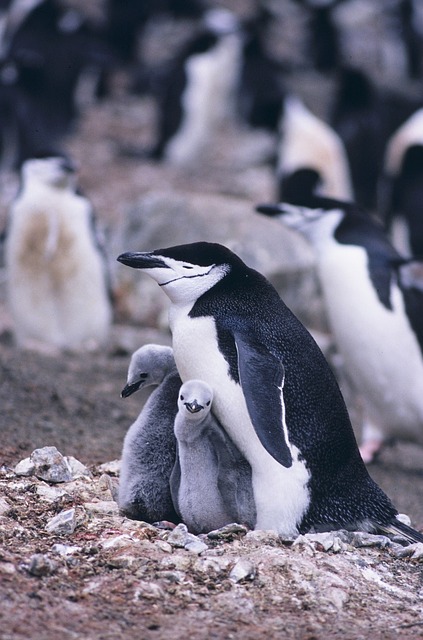 You must have seen the videos of weird ways penguins walk at times. Well if you look carefully, you can see their babies under them.

The newborn penguin babies are covered in down feathers, which isn’t sufficient enough to provide them adequate protection from the harsh winters.

It takes some time before their feathers become adequately thick to give them enough protection. Until that happens, these babies remain under the parent that’s taking care of them.

These babies remain hidden under the thick plumage of their parents that provides them with adequate heat.

Another reason why they hide under the plumage of their parent is for protection from hungry predators. The baby penguins are vulnerable until they molt and develop a water-resistant plumage.

When the adults go hunting, these babies tend to assemble in groups that are called crèche. By remaining in groups, these babies can have better protection from predators and the climate.

Now that we have discussed some interesting facts about baby penguins let us have a look at some of the frequently asked questions about them. 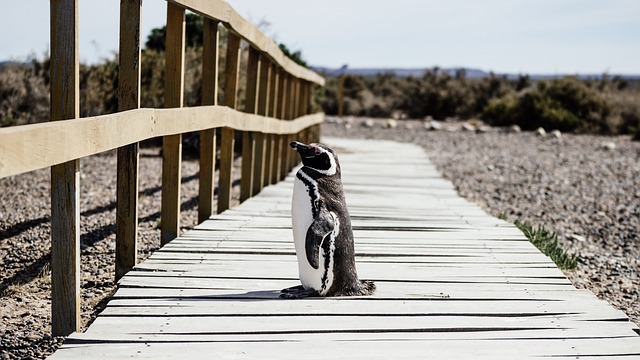 By the time the penguin babies break their way out from the egg, they will have a plumage that can be grey, white or brown depending on its species. It is important to note that not all baby penguins look alike.

The color of their plumage and size may vary with each species. Irrespective of the species of penguins, all the baby penguins have a well-developed body and open eyes when they are out from the egg.

The only thing they lack is the thick plumage like the adults to give them protection from cold and water. Owing to these reasons, baby penguins stay with their parents until they are capable of venturing out on their own.

Yes, baby penguins do drink milk. Though milk is unique to mammals, some birds are capable of producing milk to feed their young and penguin is one among those birds.

What makes it even interesting is the fact that the milk produced by these birds, too, is controlled by the hormone prolactin, as in the case of mammals. The milk produced by birds is called crop milk, and they don’t look anything like mammalian milk.

The crop is an expanded, muscular pouch located near the throat of birds. Crop milk is, in fact, an oily substance that contains 60% protein, around 35% fat, 3% carbohydrates, antibodies that are needed for the immune system of the baby penguins, and essential minerals like sodium, potassium, calcium, and phosphorus.

Unlike mammals, where the milk is produced by the males when it comes to penguins, only the males are capable of producing crop milk. Since penguins lack nipples, the males barf the crop milk into the baby’s mouth.

Do penguins eat their babies?

Yeah, some times the penguins tend to eat their babies. Though it isn’t clear as to why they do this, the most logical reason would be that the newborn baby might not be healthy enough to survive the harsh winters.

These adult penguins invest a lot of time and energy in nurturing these babies for one year.

In an unforgiving environment like the one they live in, investing time and energy on an unhealthy baby might be a luxury they cannot afford.

How much do baby penguins weigh?

The weight of a baby penguin depends on its species. Among the babies of the different species of penguin, the heaviest one is the Emperor penguin babies that weigh 315 grams, and the lightest one is the Fairy Penguin that weighs 35-47 grams.

Can I have a baby penguin as a pet? 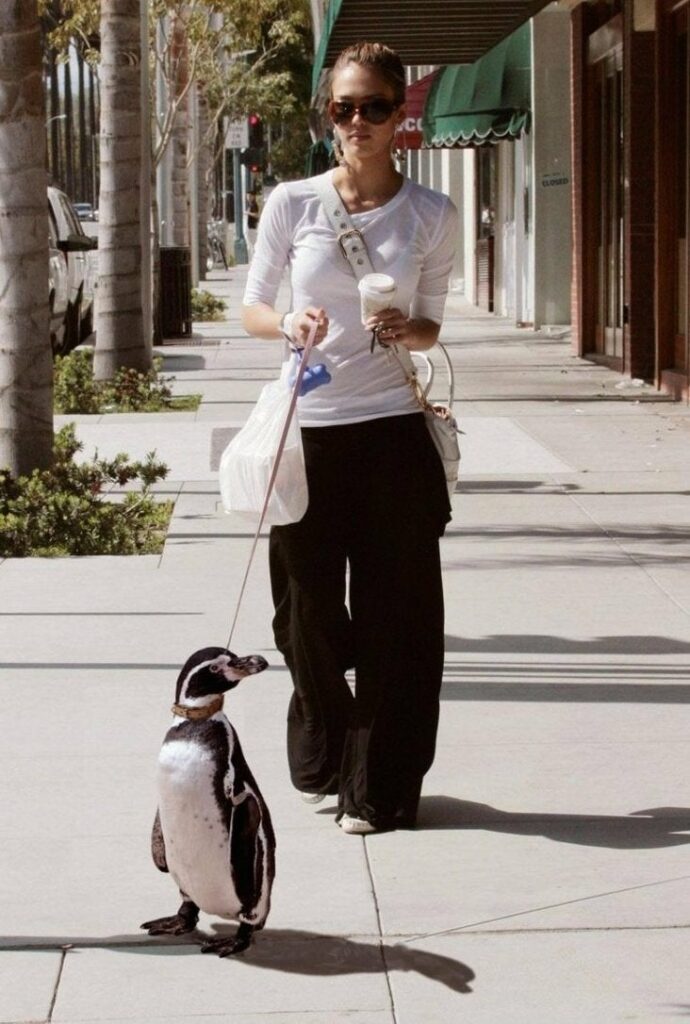 Penguins belong to the category of protected species, and the only way you can get one is from a legally approved zoo. Baby penguins are irresistibly cute, and it’s quite obvious that most people would want one as a pet. But no zoo is going to give you a baby penguin because their best chance of survival is with their parents.

But yeah, you can purchase a pair of penguins and wait for them to mate and give you a baby penguin. An adult penguin can cost you anywhere around $10,000 to $ 20,000, and you’ll have to buy a pair of penguins.

That’s not it; on average, a penguin would need around 150 fishes to eat in a day.

Feeding a penguin can cost you around $1500 a year. Apart from this, you need to set a saltwater pool for them that’s big enough for them to dive and swim, plus you would also have to clean the pool regularly.

Do baby penguins have fur?

No baby penguins do not have furs; rather, they have feathers like the other birds. A penguin feather is frequently mistaken for fur because they are short and compact.

These down feathers cannot give the baby penguin enough protection from the low temperatures. Neither they are waterproof, which is why baby penguins take shelters under their parent’s bodies to keep themselves warm.

Even if they could, they cannot because of their feathers. Unlike an adult penguin, a baby penguin does not have waterproof feathers.

Getting into the cold waters without waterproof feathers is nothing short of suicide. The babies would die of hypothermia within seconds in the water.