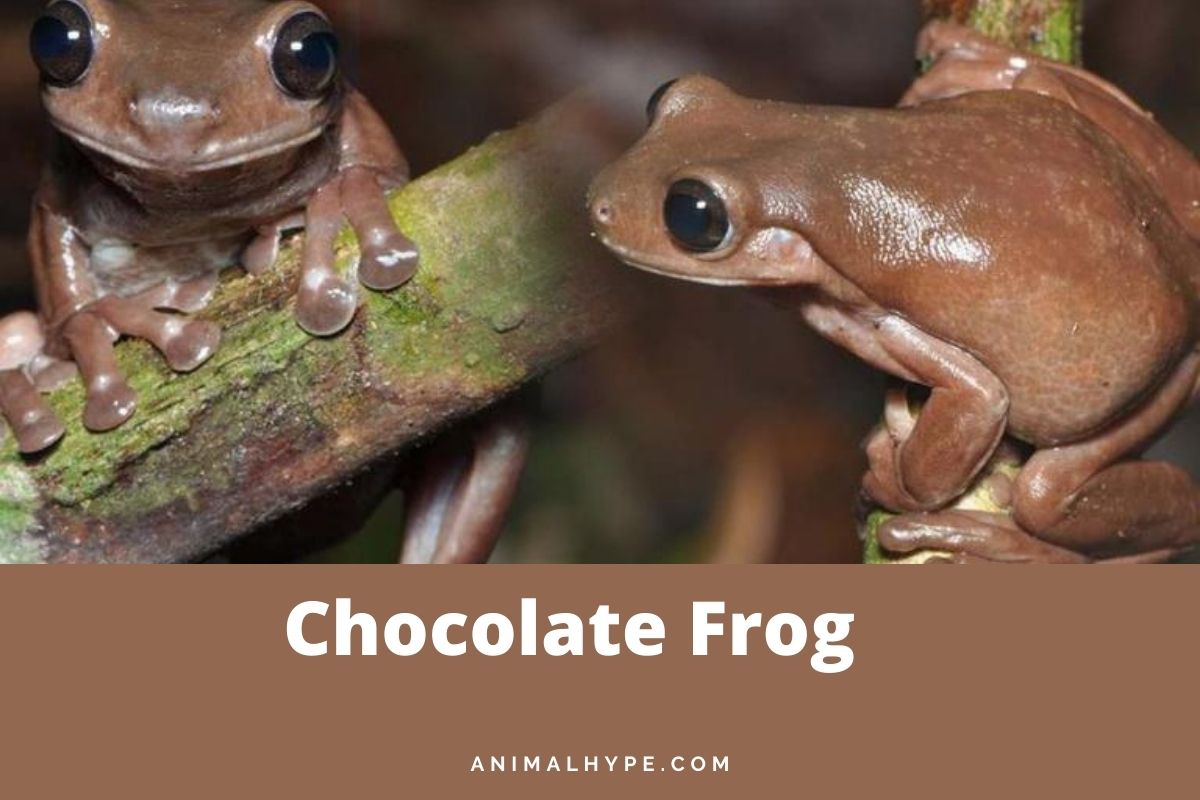 No, you’re not tripping out or suddenly hallucinating from eating one too many chocolate frogs. Some Australian scientists have discovered living and breathing chocolate frog species in the swampy terrain of New Guinea, Papua New Guinea to be exact.

The chocolate frog is distinguished by its unique coloring which ranges from dark brown to light brown and its propensity for hiding in patches of moss on rainy days.

A rather succulent discovery, an Austrian scientist has unearthed a brown-colored “Chocolate Frog,” a new species of frog in the lowland wilds of New Guinea.

South Australia Museum’s frog specialist, Steve Richards first caught sight of this exquisite amphibian 5 years back in 2016 in a tremendously hostile habitat that discouraged exploration. The location is “swampy, it’s spiky, there are lots of malaria-carrying mozzies, it floods, there are crocodiles and not many roads. It’s a really unpleasant place to work,” he said.

Back then, he was wading through the steamy marshes, keeping his eyes peeled for potential crocodile attacks, and curiously discovering the cocoa-toned creature. But down to his luck, he accidentally troubled a protruded nest carrying colossal hornets. Next, he “had to run flat out, trying to get away from these things, which was very difficult because of the water and knee-high mud.” Dr. Richards revealed.

Despite the challenging situation, he bagged some nifty specimens that he and his colleagues weaponized to support the inception of a new species after years of meticulous research.

Earlier today, researchers at the Queensland Museum branded this nut-brown frog as the “chocolate frog,” owing to the all-brown profile that sets it apart from the typical green coloring of the tree frog species.

“It was a surprising discovery to find an overlooked relative of Australia’s well-known and common green tree frog living in the lowland rainforests of New Guinea.” In fact, as per reports, scientists believe that this species could even be widespread across the New Guinean terrain.

The chocolate frog has been scientifically termed as Litoria mira, because the word ‘Mira,’ in Latin, translates into ‘strange,’ or ‘surprised,’ which is exactly how this unveiled amphibian has been discovered.

Dr. Paul Oliver, a researcher from Queensland Museum held the charge for the species’ genetics.

He said, “The closest known relative of Litoria Mira is the Australian green tree frog. The two species look similar except one is usually green, while the new species usually has a lovely chocolate coloring.”

Oliver claimed that even though the chocolate frog holds a stark resemblance to the well-known Australian green tree frog, and the only difference between the two is their color, yet it is likely that each of these has evolved to genetically differ to a point where they cannot breed any longer.

He also mentioned that he does not believe that the existence of chocolate frogs could be found on Australian lands, because they lack the swampy, lowland marshes of New Guinea.

However, as the entire team studied the identification of the physical distinctions to determine if the Litoria mira species were completely different, it was pronounced that oftentimes, the Aussie green tree frogs can bear a brown coloring and also inhabit the New Guinean terrains.

Because both would look almost identical to an untrained eye, one of the primary questions that were dispensed to the scientists, and made waves was whether the chocolate frogs could be mistakenly confused with the Australian green tree frogs, which sometimes bore a cocoa-colored body.

Later, scientists tracked various corporeal differences. Upon meticulous examination, it was recorded that one of these differences was the minute lavender-toned patches behind the eyes of the chocolate frog.

It was also observed that the chocolate frog is relatively smaller than its green counterpart, ranging between 7 to 8 cm while fully developed.

Despite the conspicuous indications, Dr. Richards, the inventor of around 200 of the chocolate frogs across New Guinea said that it was evident when something new was in the charts. Yet, it almost took forever and a day for the research to lucratively come to light!

The lands of Australia and New Guinea have been historically interconnected since the late Tertiary period (2.6 million years ago), and share the presence of biotic elements. However, today, while the former is known for its abundance of savannahs, a large portion of the latter is dominated by rainforests.

Consequently, researchers thought that governing the biotic conformity between both regions is crucial to understand how both kinds of habitats have contracted and expanded over the years. However, given the connection between the two, “Who knows maybe something like the chocolate frog will turn up,” added Richards.

“Estimates for the divergence of the new species in our study show that in the Pliocene (5.3 million to 2.6 million years ago) there was still connectivity between the two species across lowland tropical habitats of northern Australia and New Guinea.

These results emphasize the extent and connectivity of lowland rainforest and savannah environments across northern Australia and southern New Guinea and the profound shifts the region has undergone since the late Pliocene,” mentioned Oliver.

Dr. Paul Oliver and Dr. Steve Richards have co-authored a research paper about the unique chocolate frog, which is published in the Australian Journal of Zoology.

Read Types of Frogs in Ohio (15 species with pictures) 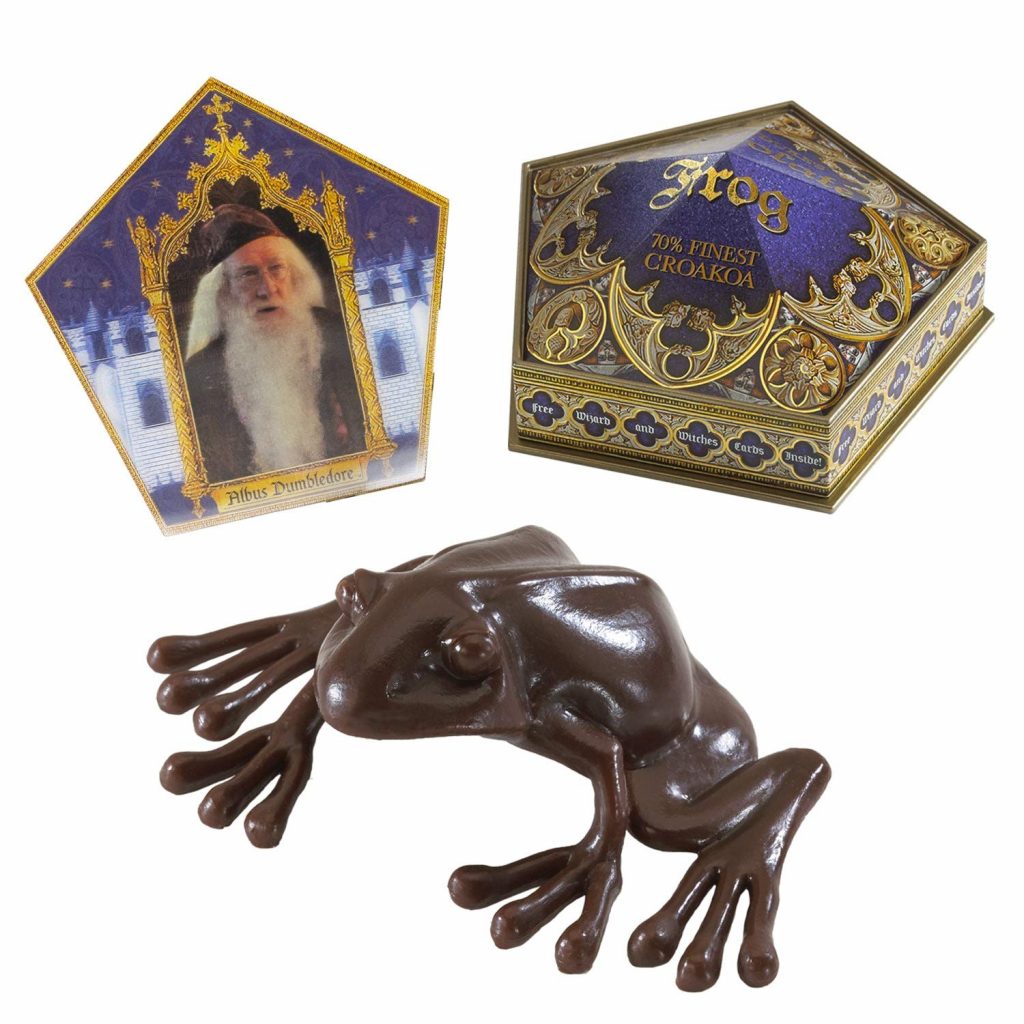 “What are these? They’re not really frogs, are they?” was Harry Potter’s earliest encounter with the brown-colored frogs as he bizarrely proposed his question to Ron.

“Chocolate Frogs have cards, inside them, you know, to collect famous witches and wizards. I’ve got about five hundred, but I haven’t got Agrippa or Ptolemy,” rambled Weasely while his mouth flooded with sweetmeats.

If you are a Potterhead, you will remember the time in Harry Potter and the Philosopher’s Stone when Harry shelled out his gold coins to get his hands on the stupefying chocolate frogs for himself and his friend and caught a glimpse of Albus Dumbledore on the magic card. Before he could even bat an eyelid, the frog hopped out of the window. Later that year, Hermione gifted him a huge box for Christmas that brimmed with the same chocolaty frogs.

From this spell-working sweet playing a key role as a clue to unearthing Nicolas Flamel’s real identity to Harry offering his last piece to Neville Longbottom to hearten him after an altercation with Draco Malfoy in the year 1992, the Chocolate Frog has certainly come a long way.

Ultimately, the golden trio of Harry, Ron, and Hermione was put on the Chocolate Frog cards for heroically winning against Lord Voldemort. In fact, for both Albus Dumbledore and Ron Weasely, being displayed on its cards was no less than an honor, and undoubtedly their proudest moment.

Did you know that presumably, chocolate frogs were prepared with 70% Croakoa in the Harry Potter world, which supposedly allowed them to mirror a real-life frog?

To our surprise, the most ludicrous confectionery from the Hogward’s Express trolley, the Chocolate Frog is now actually visible to the Muggle eyes in New Guinea. Who knows if the magical Universe is real, and as a matter of fact, the Litoria mira species have sprung up from the Hogwardian quarters itself!

The piquant-looking “chocky” frog is nothing short of nature’s marvel and certainly reminds one of the majestic, wizarding sweet that once allured us in the Harry Potter series. Although the similarities are only limited to their appearance, there is still a deluge of details to know about this creature and we cannot wait to explore more!

27 Types of Frogs in Florida (with pictures)