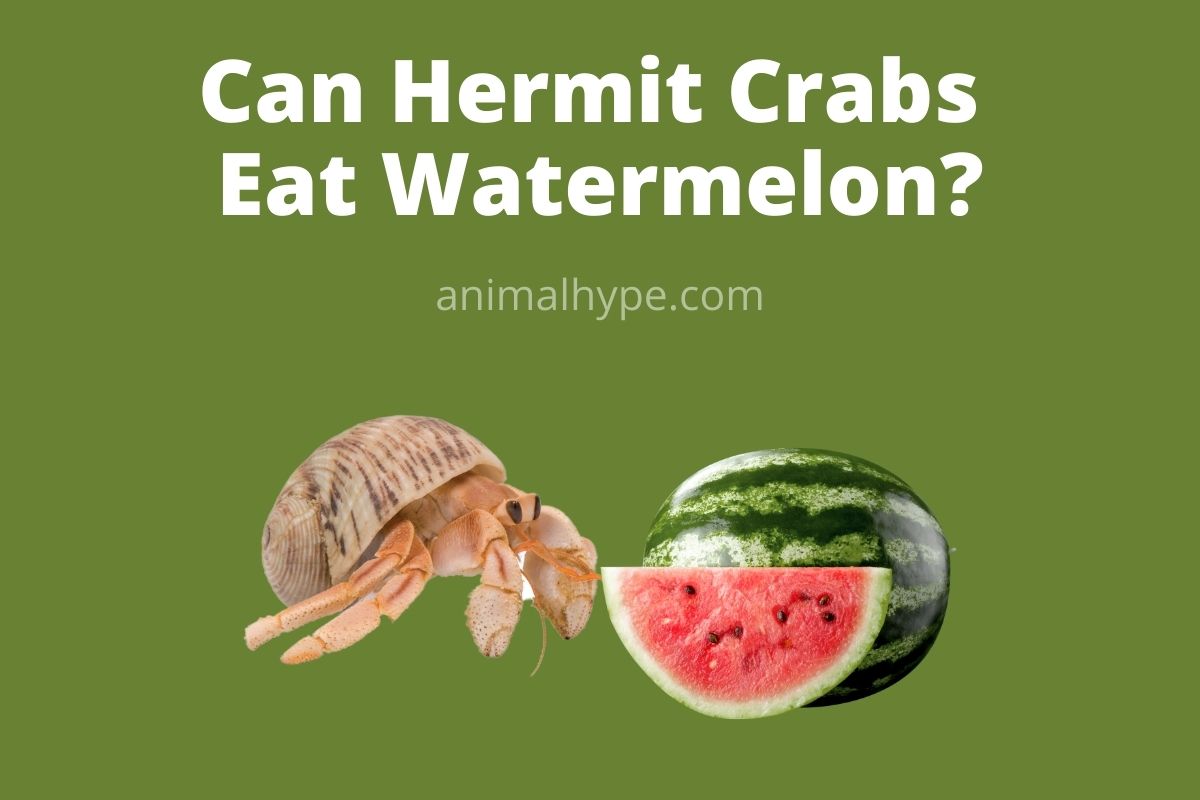 Hermit crabs are both interesting and inexpensive pets. This small crustacean has been kept as a pet almost since the moment it was first discovered. They do not require any special care, they eat just about anything that is edible and they can be quite entertaining to watch. Watermelons are juicy fruits that every person in the family will enjoy eating. But have you ever wondered if they can also be given to hermit crabs as well?

But can hermit crabs eat watermelon? Yes, the pink flesh of watermelon is rich in several essential minerals and vitamins which are an absolute necessity for the well-being of hermit crabs. However, to avoid any complications, you must make sure to remove the rind and seeds before feeding these fruits to your pet hermit crabs.

Watermelons are sweet fruits that are one of the favorite treats of hermit crabs. These fruits not only give them a change from their usual food but also provide essential nutrients such as carbohydrates, minerals, and vitamins.

Watermelons are sweet and watery fruits that can act as a refreshing snack for us, particularly during the summer months. But can these treats work just as well for your pet crabs? That’s what we aim to figure out in this article. If you have any doubts or questions about feeding these melons to your pet friends, you can find their answers below.

Is watermelon healthy for hermit crabs?

Did you know that hermit crabs are scavengers in the wild, eating anything they can come across? In captivity, they’re not all that different either; no matter what you feed them, they will most likely gobble it down.

But just because they will eat anything doesn’t mean it is healthy for them. And since they cannot think about their health, the responsibility of doing it falls on you. So, can watermelons benefit the health of your crabs? We’ll get to that in a minute, but let’s first go through the nutritional table of these fruits given below:

The nutritional value of watermelons

As you can see for yourself in the table, watermelons are rich in Vitamin A, and along with it comes beta-carotene, an organic pigment that is vital for keeping the crab’s shell bright and colorful.

These fruits also contain Vitamin C, which strengthens their immune health, preventing them from all kinds of infections (which are often the cause of their death in captivity). Calcium, a mineral that is most essential for their health, is also present in watermelons.

Additionally, watermelons are rich in antioxidants, carbs, and fibers, all of which are necessary for your crab’s well-being. It would, thus, be safe to assume that these fruits are great for the health of the hermit crabs.

Can watermelon be fed to hermit crabs along with its seeds?

While the inner flesh of watermelon is both healthy and delicious for the hermit crabs, what about the little black seeds present in it? Are these seeds edible to your pet friends as well? No, they aren’t.

It might come as a surprise to many, but amygdalin, the chemical that makes apple seeds lethal, is also present in the watermelon seeds, but a much smaller amount. This small amount might not mean much to you, but it can be highly toxic to the hermit crabs.

What about watermelon rind? Is it edible to hermit crabs as well?

The rind of watermelons is thick and fibrous and is too tough for us to eat, which is why we usually throw it away. Can you imagine your little pets feeding on something that tough? We know you can’t. And even if they somehow manage to cut off a piece of the rind and try to eat it, it’s just too fibrous for them.

All of us know that watermelons are seasonal fruits that are only available during a small period of time. To preserve these fruits and enjoy them outside of the season as well, watermelons are dehydrated. These dehydrated versions are referred to as “dried watermelons.”

Contrary to popular belief, the nutritional value of watermelons is more or less the same in both their fresh and dried versions, except for one significant difference. This difference is in their sugar levels. Since the process of dehydration sucks all the water out of these fruits, what’s left behind is concentrated sugar, resulting in a higher calorific count.

Is watermelon juice safe for hermit crabs to consume?

If watermelons themselves are safe for your pet crabs to consume, there is no reason why they cannot drink their juice. Moreover, since watermelons are practically all water, blending their juice is much easier and less time-consuming than other fruits.

However, if you’re planning on sharing your watermelon juice with your hermit crabs, there are a few things you might want to know beforehand. The first concern is the seeds of watermelon. While most of you already remove all seeds from watermelons before blending their juice, when making it for your pets, you need to be extra careful.

As we’ve already mentioned above, these seeds contain a small amount of amygdalin which, when broken, converts into hydrogen cyanide and be lethal for the health of your pet friends.

Another thing you must keep in mind is never to feed them store-bought watermelon juice. These juices are highly processed and contain many added preservatives and additives, not the extra added sugar. While these additives are safe for human consumption, they can harm your pet’s health.

Now that we’ve covered almost all grounds of feeding watermelons to hermit crabs, what remains is discussing how to feed these fruits to them. It is not as difficult as it might sound. Below are some pointers that might be helpful when you’re feeding them watermelons for the first time:

Is it okay to feed yogurt to my hermit crab? Yes, hermit crabs can eat yogurt as a treat. If you’re thinking of feeding yogurt to your pet crabs and are confused about which yogurt to go with, purchase live culture organic yogurt. This is because the live bacteria present in it makes it easier for the hermit crabs to digest it.

Which other fruits can be fed to the hermit crabs?  Being opportunistic omnivores, hermit crabs are open to enjoying a large number of fruits. Apples, papayas, mangoes, grapes, pineapples, strawberries, and bananas are some of the fruits that your pet crabs are quite fond of.

Do hermit crabs need both fresh and saltwater in their tank?  Yes, hermit crabs use both fresh and saltwater for purposes like drinking and bathing. This is why we’d recommend you to add two separate water dishes in their tank, one for freshwater and the other for saltwater. Also, make sure the dishes are big enough for them to submerge themselves in it wholly, but not big enough to drown.

I hope that the answer to ‘Can Hermit Crabs Eat Watermelon?’ helps you understand more about these fascinating creatures and how to care for one if you wish to. After all, they are very easy to look after and can make a fantastic addition to any household.

It is perfectly possible for hermit crabs to eat watermelon and that they actually love it. The high amount of water content helps them to regulate their body temperature as the food passes through their digestive tract, thus making it a very healthy fruit for hermit crabs and other crabs alike.