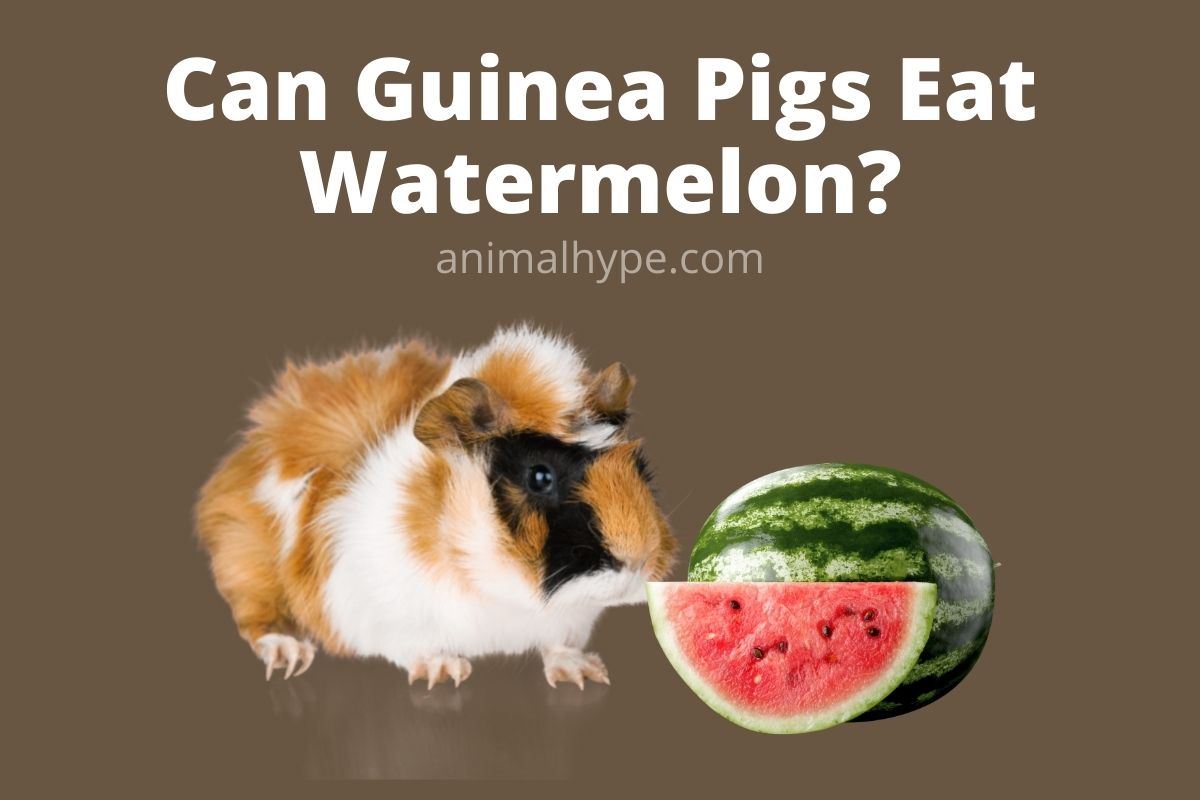 This is one of the most common questions caretakers of pet guinea pigs face. Can guinea pigs eat watermelon? What about red or yellow ones? Do they have to remove the seeds first before giving it to them? Are the rinds edible for them as well? If you’re one of those who are wondering whether your pet guinea pig can eat watermelons, this article will answer all your questions and help you make an informed decision.

Yes, watermelons are healthy for guinea pigs when fed in moderation. The black seeds present in watermelon flesh can present a choking hazard to guinea pigs, but their rind is completely safe. Guinea pigs can eat seedless and yellow watermelons safely.

Studies indicate that watermelons are a complete source of nutrients for guinea pigs. As long as you feed these fruits to your cavy in moderation (which is always the key), then it is safe and healthy for them.

In this article, we will cover all aspects of feeding watermelons to your pet cavy, including its pros and cons. Moreover, we’ll also talk about the parts of watermelon that are edible to them.

Can watermelon be healthy for guinea pigs?

Most of you must already know that fruits like watermelons cannot be included in the staple diet of guinea pigs but can only be fed to them in moderation. But just because guinea pigs can eat watermelons as a treat doesn’t mean these fruits can benefit their health.

Watermelons can be as refreshing a treat for guinea pigs as they are for us. Before we delve into talking about the health benefits of eating watermelons for your cavy, let’s quickly browse through the nutritional table of these fruits given below:

The nutritional value of watermelon

Now that you’re familiar with the nutritional composition of watermelons, check out all how they can benefit your little pets:

Because watermelons are practically all water, you’d never have to worry about your pets gaining unnecessary weight from eating these treats with a negligible fat content. Additionally, the fiber content of these fruits will make the guinea pigs feel fuller, further managing their weight.

Watermelons have an abundance of Vitamin C.

If you go through the table above, you will notice how the content of vitamin C in watermelons is quite high (8.1 grams in 100 grams of watermelon).

Since the primary role of this vitamin is to strengthen the immune system of your guinea pigs, it plays a key role in keeping them healthy. Vitamin C can also help your pets in the absorption of iron in their body. The lack of this vitamin can cause Scurvy (also called “Hypervitaminosis C”) in guinea pigs.

Following are some of the common Scurvy symptoms that you should look out for in your pets:

Lycopene is a naturally occurring plant nutrient responsible for providing vibrant coloration to red and pink fruits, including watermelons. There are many ways in this nutrient can enhance the health of your little pets:

Watermelon can improve the cardiovascular health of guinea pigs.

Have you ever heard of citrulline? It is an amino acid present in watermelons that is essential in increasing the level of nitric oxide in their body. Nitric oxides can expand their blood vessels, balance their blood pressure levels, and promote cardiovascular health.

In addition to citrulline, minerals like magnesium and potassium also have a positive effect on the cardiac health of your pets.

There’s a reason why watermelons have “water” in their name. The flesh of these fruits contains up to 95% water, which is a bonus for your little pets, particularly during summers.

Guinea pigs can easily get dehydrated on hot days. If you serve them a slice of watermelon, it can keep them hydrated throughout the day.

Guinea pigs are small animals with a small diet, most of which should contain hay and pellets. But if watermelons can offer your cavy so many health benefits, why must you limit their watermelon intake?

Keep reading to find an answer to this question:

Did you notice in the table above that 100 grams of watermelon contains 112 mg of potassium? While potassium is healthy for your guinea pigs in moderation, when fed in excess, it can be lethal.

This is particularly true for guinea pigs that have a history of kidney problems. Since these organs are responsible for removing excess potassium from your pet’s body, if they’re not functioning properly, it could lead to serious complications.

The risk of too much sugar

All fruits have one thing in common: their sweetness. Watermelons, containing about 6 grams of sugar for every 100 grams of their flesh, are very sweet.

Guinea pigs have a sensitive digestive tract and too much sugar and easily upset their stomach, often leading to cramps and diarrhea.

Is the rind of watermelon safe for guinea pigs to eat?

While we find the watermelon rind unpalatable, your pets might not be so picky about it. Many guinea pig owners claim that their pets have no difficulty eating watermelon rind. In fact, the rind is rich in several nutrients but lacks sugar, which makes it a healthier choice than the flesh for the guinea pigs.

However, just like the flesh, watermelon rind should also be fed to the cavies in moderation. Also, if you plan on feeding them the rind, make sure you purchase organic watermelons instead of commercially grown ones.

This is because the rind of commercially grown watermelons is often sprayed with toxic chemicals such as pesticides to keep insects away from the fruits. And if any of these chemicals are ingested by your pet cavies, the consequences could be disastrous.

What about watermelon seeds? Do they pose any threat to guinea pigs?

Whenever you feed fruits to your little pets, their seeds are always your primary concern, aren’t they? They might either contain some chemical that could be toxic to your guinea pigs or could be large enough to pose a choking hazard.

This can be more problematic in the case of watermelon, which contains far too many seeds. So, are these seeds safe for your guinea pig’s consumption? No, not really. While these seeds don’t contain anything that could be harmful to them, your pets can potentially choke on them.

It’s also worth noting that there are two kinds of seeds present in watermelons, the large and mature black ones and the small, white ones. The only seeds that you need to be careful about are black ones; white ones are harmless and can easily be consumed.

Can you feed seedless watermelons to guinea pigs?

The seedless watermelons are not truly seedless, although their name suggests otherwise. Instead, these fruits contain seeds that are sterile (not fully mature). Because these fruits can be consumed more conveniently, they have a higher commercial value than regular watermelons.

The seeds present in the seedless watermelons are smaller and softer than the regular ones and are white in color. If you have been wondering about feeding these to your pets, go ahead.

The white seeds present in these fruits are far too soft to pose any choking hazard for your guinea pigs. This would mean that you won’t have to go through all the trouble of removing seeds from a watermelon before feeding it to them.

Can you feed yellow watermelons to guinea pigs?

Whenever you think of watermelon flesh, which color pops into your head? Red, right?

But did you know that red is not the only color watermelons come in? If you thought that, you probably hadn’t seen yellow watermelons before. I know what most of you might be thinking, but no, these watermelons are not modified artificially but result from a natural mutation.

Yellow watermelons have originated from Africa and appear just like the red watermelons on the outside, with a similar green rind. On the inside, they have pale-yellow flesh and black seeds.

The taste of these watermelons varies slightly from the red ones and has a somewhat honey-like flavor. Although the nutritional value of both watermelon varieties is more or less the same, there is one difference that you should know about.

The yellow watermelons lack lycopene, an antioxidant responsible for giving the red watermelons their vibrant color. And since we’ve already discussed the benefits of lycopene for your pets, it would be wise to feed them red watermelons, and not yellow ones, when given a choice. However, occasionally, these can be fed to guinea pigs as safely as red ones.

Is it okay to feed watermelons to baby guinea pigs?

Have you brought home a guinea pig that is still too young to be called an adult? If it is, then the first thing you need to do is consult your vet and find out its exact age.

This is necessary because, just as any other animal (including humans), the dietary needs of a baby guinea pig are quite different from an adult. This also means that not everything considered safe for adults to eat can be fed to their babies.

Baby guinea pigs should drink only their mother’s milk (or a replacement formula in the absence of it) during the first three weeks of their life.

Once they cross this threshold, alfalfa hay and pellets should be introduced into their diet. Being rich in calcium and protein, alfalfa supports their healthy growth and development.

You can start feeding them water around this time as well. After feeding them alfalfa for a week, you can gradually start adding other kinds of hay to their diet (slowly eliminating alfalfa that is no longer needed).

If you want to feed watermelon, or any other fruit, to a young guinea pig, you should probably wait until they’re a couple of months old.

Guinea pigs can indeed eat watermelon. However, you do need to make sure that the seeds have been removed from the fruit, or they could cause serious intestinal blockages. It has lots of Vitamin C and vitamin A. Plus it’s a great way for them to get some water into their diet.

I know many guinea pig owners who make it a part of their pet’s diet on occasion. Now the next time someone asks, “can guinea pigs eat watermelon?” you will be prepared.

That’s it, we’ve come to the end of this guide! I hope you’ve enjoyed reading it. It’s obvious that guinea pigs can eat most fruits and vegetables, but they still require a balanced diet and good care.