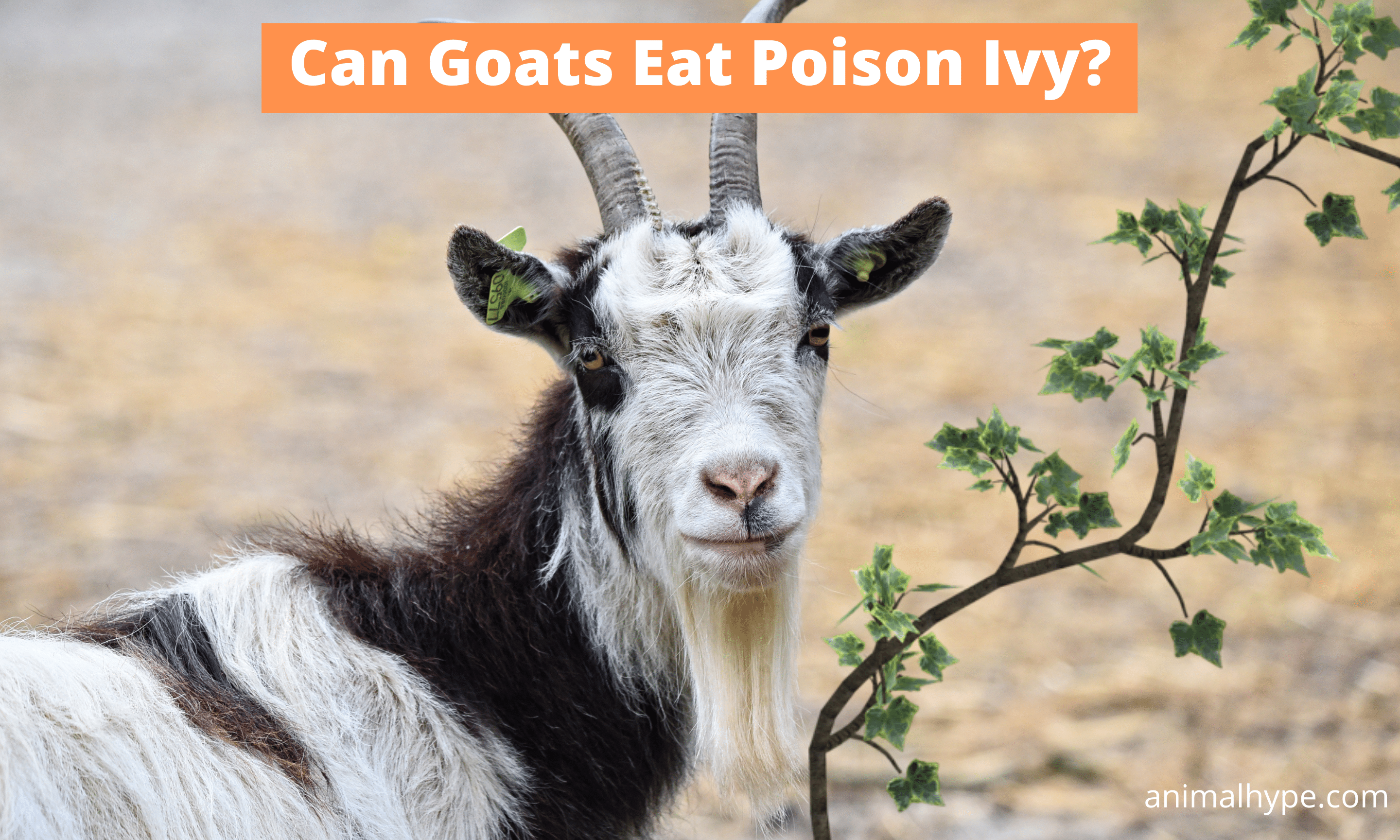 All of us know that goats are primarily farm animals. However, this doesn’t mean that they can’t be kept as pets. In fact, these ruminants make great household pets due to their harmless and friendly nature. Goats are also capable of forming a strong bond with their owners and are great companions to them. They also have a strong digestive system and can eat a wide range of plants and brushes. But what about Poison Ivy?

Can Goats eat Poison Ivy? Yes, poison ivy is completely safe for goats to eat. While Poison Ivy can have several ill effects on humans who touch it, such as itching, rashes, and skin irritation, these plants are perfectly safe for your pet ruminants. In fact, goats enjoy munching on the Poison Ivy leaves and can also eat the berries and flowers of the plant safely. Like the adults, Poison Ivy is safe for the baby Goats to consume as well.

When it comes to their diet, goats usually do not give their owners a reason to worry about. Although they are curious little things that tend to put everything into their mouth, they rarely eat something harmful.

These animals are believed to possess a unique intelligence in terms of what to eat. In this article, we will learn all about goats eating different parts of the Poison Ivy plant. We’ll also talk about whether or not they can eat other members of the Poison Ivy family.

Why is Poison Ivy poisonous to humans?

Poison Ivy (Toxicodendron radicans) is a highly allergic plant endemic to North America and Asia. Along with the other members of its genus, it is known for releasing a toxic compound known as urushiol, a liquid present in the sap of the plant.

When humans come in contact with the plant, they suffer from skin allergies such as itching, rashes, and irritation on the parts that were exposed to the plant. This is why these plants are considered poisonous to humans.

However, to many animals, birds, bees, and flies, they are safe. These include goats, deer, raccoons, black bears, etc. 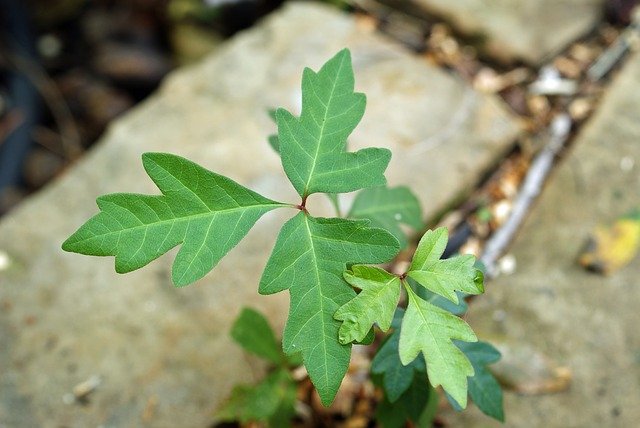 Although we have already established that goats can safely eat Poison Ivy, do they really like eating it? The answer is yes, they do. If your pet goats find any of these wines or shrubs going in your neighborhood, it will become their favorite spot.

The fact that there are people who rent goats to get rid of the Poison Ivy growing around their house in an environment-friendly way is a clear indication that these ruminants like it.

Can Goats eat the roots of Poison Ivy?

It is a common misconception prevalent among the goat-owners that goats eat the roots of Poison Ivy as well. In reality, goats do not eat the root of these plants. However, since they strip it of all the leaves and branches, the roots die on their own in most cases.

However, if the plant is re-growing, you can use a vinegar-based herbicide to kill it without harming the soil.

Between the months of April and July, you can see small, yellowish-green flowers growing in clusters on the Poison Ivy plants. These flowers mature into berries in the late summer and fall. Unlike the other parts of the plant, its flowers do not cause any irritation to humans.

Goats can eat these flowers just as they can eat the other parts of the plants without a second thought.

Is it safe for Goats to eat Poison Ivy berries? 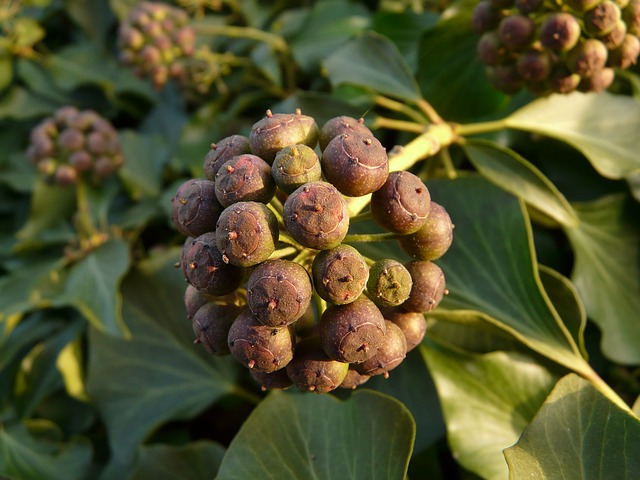 At the approach of the fall, white berries begin to grow on the Poison Ivy plants. These berries are medium-sized and grow in abundance.

While it is not safe for humans to eat them, birds have no such limitations and eat them lovingly. Some of the birds that are found pecking on these berries often include Woodpeckers, Northern Flickers, Cedar Waxwings, Eastern Phoebes, etc.

Many goat-owners have expressed serious concern about whether or not their pets can eat the Poison Ivy berries safely. To their relief, these berries are safe for the goats, as for the birds we talked about earlier.

While full-grown goats have a sturdy digestive system, it is natural to worry about their health when they are young and fragile. Do you have a young goat at home and are worried about them eating Poison Ivy, you can rest assured. Just as Poison Ivy poses no threat to the adult goats, they are safe for their babies as well.

Is it safe to drink milk from Goats that eat Poison Ivy?

The milk of goats is usually prescribed for small children in order to strengthen their immunity. While most people stop drinking this milk once they’re past their teenage, there are others who like its taste too much to give up on it.

Ever since the word of goats eating Poison Ivy spread around, many people who use goat milk have brought forward queries about how it could affect them.

Today, we are going to put all concerns regarding the safety of goat’s milk to rest. Many studies have been conducted to trace the journey of urushiol inside the goat’s body.

As a result, it has been found that this toxic compound from Poison Ivy cannot be transferred into their milk. Hence, it is completely safe to drink the milk of goats that eat Poison Ivy.

The myth of Goat’s milk providing immunity from Poison Ivy

In the countryside, it is a popular belief that those who drink the milk of goats that eat Poison Ivy are immune to the reactions of touching the plant. However, since there is no scientific data to back the claim right now, it is considered more as a myth than a fact.

Other poisonous plants that are safe for Goats

Apart from the Poison Ivy, there are many other plants that your pet ruminants can safely eat. Below, we are going to discuss some of these plants:

Poison Oak – Another member of the genus of Poison Ivy, the Poison Oak is a deciduous shrub that is endemic to North America. Also containing urushiol, it is one of the most painful North American plants for humans.

English Ivy – Endemic to most of Europe and western parts of Asia, the English Ivy is a clinging vine that is considered an invasive species in many parts of the world.

Thistle – All the flowering plants that have remarkably sharp prickles along their margin belong to the family of Thistles.

Poison Sumac – Earlier known as Rhus Vernix, the Poison Sumac is a wooded shrub that appears more like a small tree. These plants are not only poisonous to humans in direct contact but also when they are burnt.

Plants that are actually poisonous to Goats

Just because goats can eat the aforementioned plants doesn’t mean that they are invulnerable to any plant. Following is a list of different kinds of plants that can be toxic to your pet ruminants.

Do goats get along well with kids? Yes, goats are gentle animals that love human kids. With a few leafy bribes, you can get them to shower your kids with kisses.

Can goats eat Kudzu? Yes, they can eat Kudzu. Kudzu is a family of perennial vine endemic to the eastern parts of Asia. Due to their invasive nature, these are often planted to control soil erosion.

Can goats eat wood? No, goats do not eat wood. However, they love to chew on it and are often found rubbing their head or horns on it. If you have wooden fencing around your house, getting a pet goat might not be a good idea for you.

To sum it up, let us return to our initial question: Can goats eat Poison Ivy? Yes, goats can certainly eat Poison Ivy and do so with great enthusiasm. Poison Ivy is, in fact, one of their favorite food.

These ruminants can eat all parts of the plant, including the leaves, branches, flowers, and berries, except the root. However, once they are done munching on a plant, the roots have a slim chance of re-growing.

Nowadays, many people rent/hire goats to stop the growth of Poison Ivy around their home or neighborhood.

This is a much safer practice than spraying the plants with toxic chemicals that harm both the soil as well as the environment. Having a pet goat in your home can mean a lifetime of relief from the threat of Poison Ivy growing in your garden.