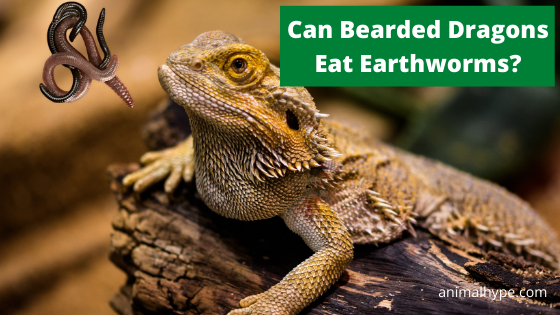 If you are looking for an exotic reptile pet for your kids, the Bearded Dragons are hands down your choice. Yes, they might have a rugged appearance that your kids might find terrifying in the beginning. However, the more time they spend with these little creatures, the more they are going to love them. Contrary to their looks, these reptiles have a rather calm and peaceful temperament and are easy to care for. When it comes to their diet, Beardies absolutely love feeding on worms and roaches. But what about earthworms?

Can Bearded Dragons eat earthworms? Yes, they can eat earthworms. Earthworms can be healthy for the Beardies as long as they are being fed these worms in careful moderation, that is, if they find them palatable. When collecting earthworms for your pet reptile, you should always go for a reputed pet store or supplier instead of catching them yourself. Also, these treats should never be given to the younger ones of the Beardies.

In this article, we are going to tell you everything you need to know about feeding earthworms to your pet Bearded Dragons.

Do Bearded Dragons eat earthworms in the wild?

Many of you might not know it, but the Beardies are native to the Australian deserts. It is, therefore, not possible for earthworms to be a part of their diet. In the wild, they have access to a large number of ground insects to feed on.

Do earthworms appeal to the taste of Bearded Dragons?

This is a difficult question to answer. Although there are Beardies that would feed on earthworms at every opportunity they get, we have noticed that they mostly don’t. This is because, in order to decrease friction, the earthworms secrete mucus, the taste of which is found to be unpalatable by most of the Beardies.

If your little pet rejects a meal of earthworms, you should better start looking for another alternative instead of hoping for them to get used to it.

Are earthworms healthy for Bearded Dragons? Risks and Benefits 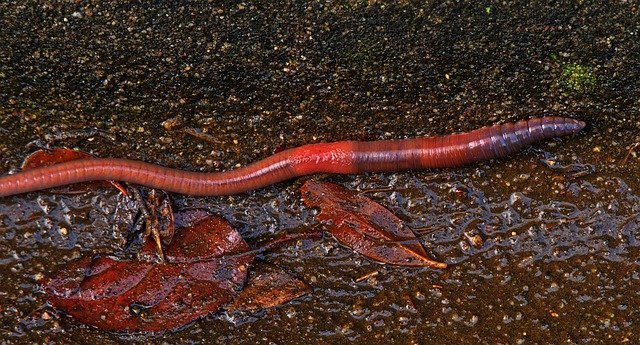 If, by any chance, your pet reptile seems interested in eating earthworms, here’s everything you need to know about the health benefits and risks associated with them:

Of all the worms that are edible for the Bearded Dragons, earthworms are the second largest in size after the hornworms.

The ones you find in your gardens can even reach a length of 14 inches! However, although most Beardies can digest these worms without an issue, there have been cases where they try to gobble them up the whole, which is not a good idea.

Eating earthworms can cause mild blockage in the Bearded Dragons’ intestines, which usually leads to constipation. Although, in some cases, it can lead to serious health problems as well.

Being omnivores, the Bearded Dragons are highly dependent on animal matter for several nutrients, particularly for protein. Earthworms are nutritionally very rich for your Beardies. You can easily assess it yourself if you look at their nutritional value.

Although the other nutrients work in their favor, the high moisture content might pose a threat to them. Since most Bearded Dragons have adapted to a diet of hard-bodied bugs, eating too many earthworms can upset their stomach.

When you undertake the job of catching these worms for your pet Beardies, from which place will you begin your hunt? Most people tend to go no further than their own yards, where they can easily find as many as they need.

This, however, is a bad idea. It is because the earthworms that you find in your yard, or even in the wild, might eat soil that has been contaminated with pesticides, insecticides, and fertilizers. If your pet Beardie eats one or two contaminated worms, it might not harm them fatally.

However, if it becomes a regular thing, the toxins can from them build up inside your pet’s body over time, making them very sick. To avoid this, you should always buy earthworms for them from a trusted pet supplier.

Earthworms might carry parasites such as nematodes, protozoa, and platyhelminths, which can infect your pet Beardies. Over time, you may notice a depletion in their health.

How often should Bearded Dragons be fed earthworms? 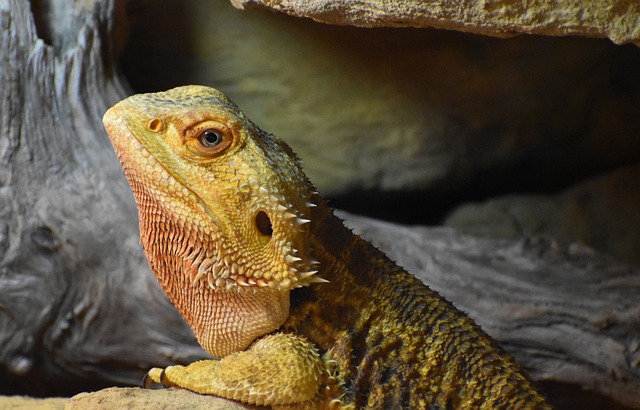 We have already established that feeding your Beardies too many earthworms won’t do them much good. But how would you determine how much or how often is enough for them? Don’t worry, we’ll tell you.

If you feed them earthworms once in a couple of weeks, you wouldn’t have to worry about its ill-effects on your pets. Feed it more frequently, and your pet might have to suffer grave consequences.

Although little is known about the diet of Beardies when they are younger, most veterinarians estimate that 60% of their diet consists of insects. However, the insects that are ideal for them are smaller ones such as crickets, fruit flies, and small waxworms. Earthworms are just too large for their diet and cause severe gastric problems in them. Therefore, it is best not to feed these worms to them until they grow older.

Other worms that Bearded Dragons can eat

Earthworms are not the only worms that Beardies can feed on. Check out all the other worms that you feed to your little pet as treats:

Horned Worms – Also known as “Goliath worms”, Horned Worms are ideal for being a part of your pet’s staple diet. You can easily find them in the pet stores in your neighborhood as well as online.

Wax Worms – Unlike the Horned Worms, Wax Worms shouldn’t be a part of your pet’s daily diet due to their high-fat content. However, as an occasional treat, these little white worms are perfect, for your Beardies will go crazy about them.

Butterworms – Rich in protein and calcium, the Butterworms are very small in size and are great for your pet’s health.

Mealworms – Mealworms are one of the most common food choices for many reptile species, including the Beardies. They are easily affordable, and your pets love them. Although, due to their hard outer shell, the baby Beardies face difficulties in eating them.

Superworms – Just as their name suggests, the Superworms are like larger versions of the mealworms and offer the same nutritional richness to your pets.

Phoenix Worms – Also referred to as the “Black Soldier fly larvae”, Phoenix worms make good supplements in the diet of the Beardies. They are rich in calcium and protein and contain a moderate amount of fat.

Silkworms – With their soft bodies and high mineral content (calcium, phosphorus, potassium), the Silkworms are a great addition to your pet’s daily diet. They have a moderate fat content and are rich in a number of nutrients.

Should I feed my Beardie every day? Yes, absolutely. Although Beardies can go without food for a while, to ensure that they are healthy, feeding them every day is a necessity. In case your pet Beardie is under the age of a year, then you should be feeding them at least 3-5 times a day to ensure their proper growth and development.

How long do Beardies live? In captivity, Beardies can live up to the age of 10 years when they are well taken care of. Some have survived as long as 12 years, although these in are extremely rare cases.

Which fruits are safe for my Beardie? As a rule of thumb, you shouldn’t include fruits in the daily diet of Beardies. With that being said, most of the fruits that you eat, other than avocados, are safe for your pet as well. Here is a list of fruits you can feed them as treats without a second thought:

How do Beardies fare in the company? When Beardies are younger, they thrive in the company. Placing two baby Beardies in a single tank is, therefore, a great idea. However, as they grow older, it is best to keep them in different tanks. The females, for once, might even adjust in one tank. However, males cannot.

Which veggies can I add to the daily diet of my Beardie? You can add squash, turnip greens, collared, dandelion, and mustard greens to their daily diet. Moreover, cucumber, radish, pumpkin, okra, cilantro, seaweed, basil, zucchini, cabbage, lemongrass, kale, and asparagus are safe for feeding them occasionally.

Let’s go back to our initial question, that is, can Beardies eat earthworms? Yes, they can. However, just because they can doesn’t mean you should feed them these often. Earthworms, when fed too often, are more trouble to your pets than they are worth.

They contain far too much moisture for them and harbor the risk of carrying disease-spreading parasites that can make your pets very sick. Therefore, while feeding them earthworms, you should follow strict moderation.

To be more cautious, you can also go for other, safer alternatives, such as crickets, dubia roaches, locusts, and mealworms.