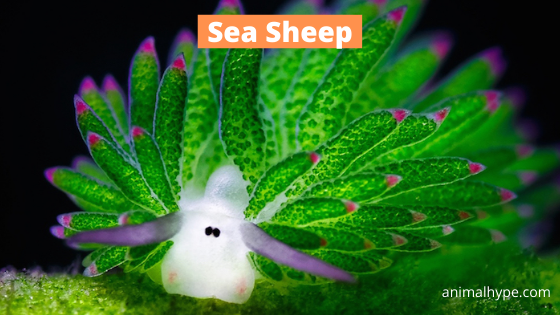 All of us terrestrial beings are surrounded by countless creatures who have unusual traits, but beyond our terrestrial world lies the world of the ocean, the marine ecosystem that hides many more extraordinary treasures. Although we’ve come quite far in exploring the aquatic world and the creatures that inhabit it, when we compare it with the vastness of the oceans, we realize that we have barely scratched the surface.

Have you ever heard of the certain sea animals who can perform photosynthesize like plants? The Sea Sheep is one such sea creature that we have very little knowledge about. Discovered not more than a few decades ago, these sea slugs are quite extraordinary for various reasons.

In this article, we will tell you fascinating and unusual facts about the Sea Sheep that will blow your mind. Sit tight.

First, let us take a quick look at the lineage and family background of the Sea Sheep:

Why is the Sea Sheep called “sheep”?

The Sea Sheep belongs to the category of sea slugs, which are invertebrate marine animals that somewhat resemble the terrestrial slugs that you might have seen somewhere. But can you find even one similarity between a slug and a sheep?

Very unlikely. The very idea of a comparison between the two sounds incredulous. While sheep are four-legged, ruminant mammals that are reared for their wool, slugs are terrestrial mollusks who either lack a shell or have a very insignificant shell.

Why, then, are Sea Sheep, being basically a slug, called Sheep? While there is no straightforward answer to it, there are some resemblances between their appearances that might have inspired the name.

Sea Sheep have a pair of antennae at either side of their head, which looks very much like the ears of the Sheep. Some people can also compare the hair-like structures grown on their bodies to the wool that grows on the Sheep. That is about all the similarities you can find between the two.

Breaking down the scientific name of the Sea Sheep

As you can see in the table given above, the scientific name of the Sea Sheep is “Costasiella Kuroshimae”. While the term “Costasiella” refers to the genus of the sacoglossan sea slugs to which the Sea Sheep belongs, what does the second part of their name signify?

“Kurashimae” comes from the name of the Japanese island named Kuroshima. Also known as the Kuro island, Kuroshima is one of the native places of the Sea Sheep.

Moreover, the island of Kuroshima might also have some relevance with the discovery of their species, which makes the name all the more significant. 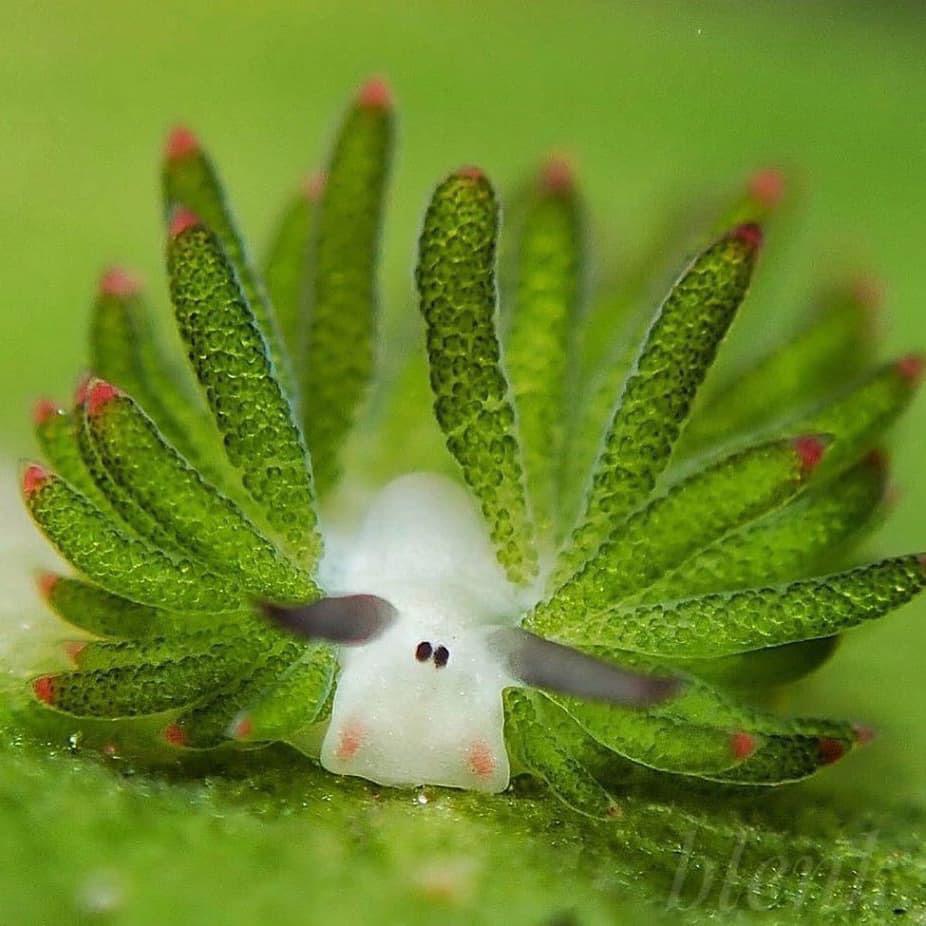 Not much is known about what the Sea Sheep looks like because they rarely appear on the surface of the sea or the ocean. However, from what we have gathered, we can provide you with a rough description.

The Sea Sheep are among the smaller sea slugs that only grow to be 1-inch long. Due to their small size, it is very difficult to recognize them from a fair distance.

They have a small, creamish-white, gelatinous body that looks slightly translucent, with two beady, black eyes. It is difficult to make out their mouths, but they have a pair of antennae at each side of their head, which is quite prominent.

Their body is covered with several pointy structures all over. These are similar to leaves, have a pinkish tip and green dots all over them.

Although most of their sightings have been of the green-colored Sea Sheep, it is said that there are other color variations present in the ocean as well.

The plant-like behavior of the Sea Sheep

While we agree that the Sea Sheep slightly resembles the terrestrial Sheep and are inhabitants of the oceans, how does their behavior match that of the plants?

What we’re going to talk about now is probably the most unusual trait that makes the Sea Sheep so significant.
The Sea Sheep are often compared to plants because they have the ability to perform the process of photosynthesis.

All of us familiar with photosynthesis, aren’t we? For a quick memory brush-up, photosynthesis is a process in which the sunlight is used to synthesize all the necessary nutrients from water and carbon dioxide.

The process of photosynthesis is associated with plants. In this respect, the Sea Sheep are like plants: they can perform photosynthesis just like them.

The Sea Sheep are kleptoplastic

How many of you have heard of the process of Kleptoplasty before? Even if you haven’t, there is no reason to worry.

We will explain it to you: kleptoplasty or kleptoplastidy is a process in which an organism feeds on small aquatic plants like the algae, but stores the plastids (chloroplasts) in its own body to use it to perform photosynthesis.

The process of kleptoplasty explains how animals like the Sea Sheep are able to perform photosynthesis.

Sea Sheep is not the only marine creature capable of photosynthesis

Now that you have found about the Sea Sheep being kleptoplastic, you better not make the mistake of thinking that they are the only creatures who can perform photosynthesis.

The phenomenon of kleptoplastidy can also be seen in other creatures such as the Sea Slug (Elysia chlorotica) and the Spotted Salamander (Ambystoma maculatum).

The Pea Aphid (Acyrthospihon pisum) are amazing insects who can produce carotenoids on their own, which they later use in the process of photosynthesis. 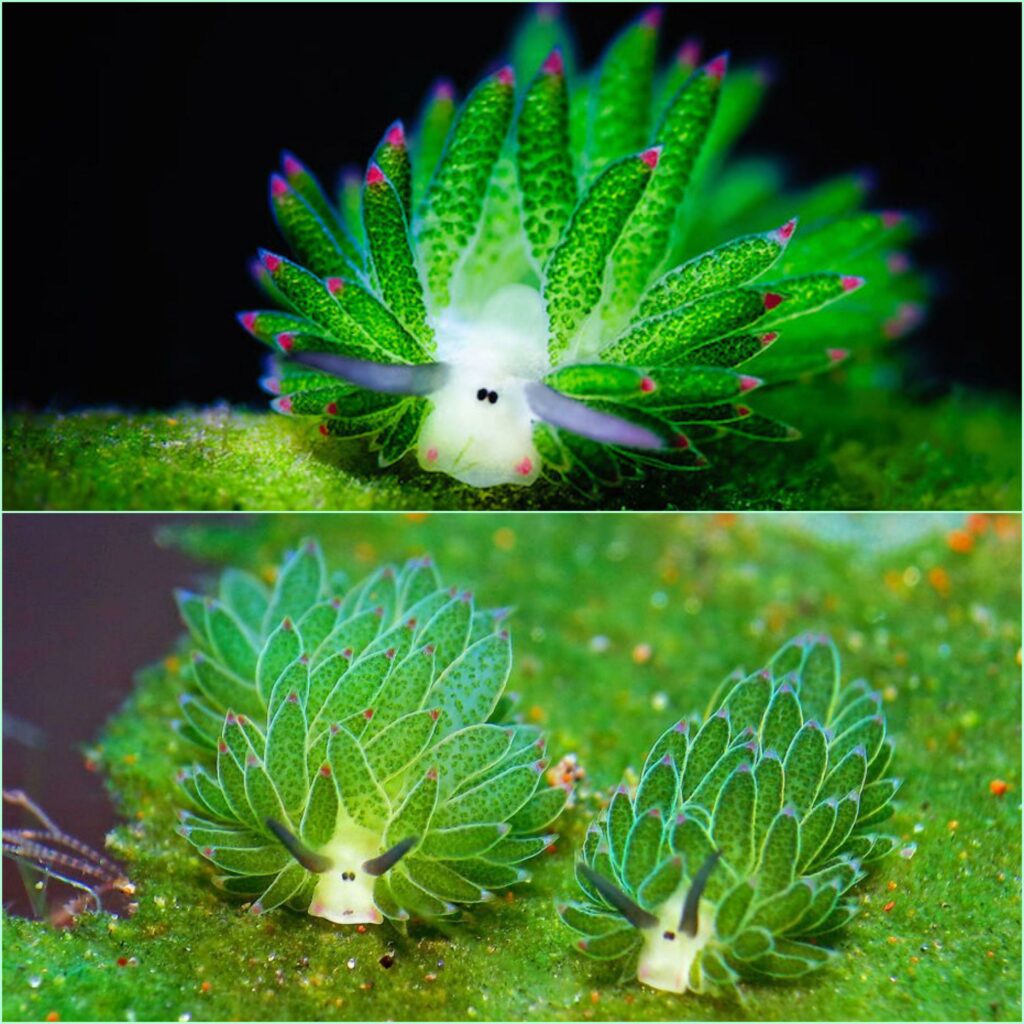 How does Sea Sheep eat?

The Sea Sheep, like the rest of the sea slug species, are pure herbivores. Their main diet is the algae (Vaucheria litorea). If they eat anything other than algae, we have no knowledge of it as of now.

The more interesting part of their diet is how they eat algae. First, they puncture the cell walls of the algae, then hold it close to their mouth so that they can suck in all of its contents.

Thereafter, instead of digesting all the contents directly, they simply retain the chloroplast from it and store it safely somewhere inside their body. Later, they take it out to use it to perform photosynthesis.

This process is similar to the one that the Sea Slug (Elysia chlorotica) performs during feeding.

Although they live in the oceans, the Sea Sheep are solar-powered

Are you wondering what makes these marine slugs solar-powered? The answer to your question is kleptoplasty. The process of kleptoplasty, which makes them eligible to perform photosynthesis, is also the reason why they are known to be “solar-powered”, i.e., deriving energy from the sun.

In which regions are the Sea Sheep found?

The Sea Sheep was first discovered from the islands of Japan in the year 1993. Little else is known about their discovery.

However, recently, some studies have shown that these kleptoplastic sea slugs aren’t limited to Japan. They have also been seen in Indonesia, New Caledonia, Papua New Guinea, Northern Australia, and Singapore.

Since these sea slugs are still considered to be understudied, there is a possibility that they could frequent in other parts of the world, too.

How long does the Sea Sheep live?

Unfortunately, due to the lack of enough data, experts have still not been able to provide information about the lifespan of the Sea Sheep. However, the lifespans of the other sacoglossan sea slugs are an indication; you can expect these creatures to live between 2-3 years on average.

Some experts claim that the Sea Sheep have a lifeline much longer than the rest of the sea slugs. However, due to a lack of evidence, their claim cannot be considered as a fact.

The sea sheep can sustain on solar energy for months

Since the Sea Sheep can perform photosynthesis, it is not surprising that they can survive on solar energy alone. However, not all the other sacoglossan sea slugs can go without any other food resource for as long as a couple of months. This feature of these creatures is, thus, quite remarkable.

Most of us have only seen the still pictures of the Sea Sheep, and wonder how these cute little creatures look in action.

Well, you needn’t worry about it. Experts who have spent time researching and observing the Sea Sheep claim that they look even cuter when they move around in the water, either to find more algae to feed on, or just for fun.

Can the Sea Sheep be kept as pets?

Many people keep slugs as pets in their aquarium. It is, therefore, a common question among all the marine pet enthusiasts whether or not can the Sea Sheep be kept as pets.

However, it is difficult to answer this question at the moment. Although they were discovered more than 20 years ago, there is still a lot we don’t know about them.

Due to the lack of sufficient information, it is difficult to say if they can be kept as pets. However, even if it was possible to keep them as a pet, you would probably need to get them a separate tank from the other aquatic pets. This is because these small creatures can easily become the prey of small fish and other animals you keep.

Humans have been eating slugs and snails for a long time. So far, there hasn’t been any incident where humans eat the Sea Sheep. However, since they eat nothing but algae and other plant matter, eating them shouldn’t be unsafe for humans.

Can the Sea Sheep be poisonous?

All kinds of slugs, including sea slugs, have not known to possess any kind of poison. Thus, there’s no reason why the Sea Sheep would be poisonous.

Do Sea Sheep mix well with other slugs?

How do the Sea Sheep breathe inside the water?

Like the other sea slug species, the Sea Sheep also have gills through which they can use the oxygen present in the water to breathe.

Can the Sea Sheep live in freshwater?

The name of the Sea Sheep itself is a clear statement about their habitat. They are sea creatures who live in saltwater. And, like most of the other marine creatures, they will most likely not survive in the freshwater.

The underwater world is full of creatures that we don’t know about, and the Sea Sheep is the perfect example of it. Thirty years ago, their species was unknown to mankind/ Even today, many people have not heard of them.

What makes the Sea Sheep unique is its ability to perform photosynthesis through the phenomenon of kleptoplasty. They steal chloroplast from the algae they feed on, store it in their body, and use it later in the process of photosynthesis.

Other than the Sea Sheep, the animals who can achieve such an endeavor are numbered. Studies on these fascinating creatures are still on-going. Once the experts have gathered enough knowledge about their lifecycle, reproduction, and other behaviors, it might be possible to keep them as house pets.