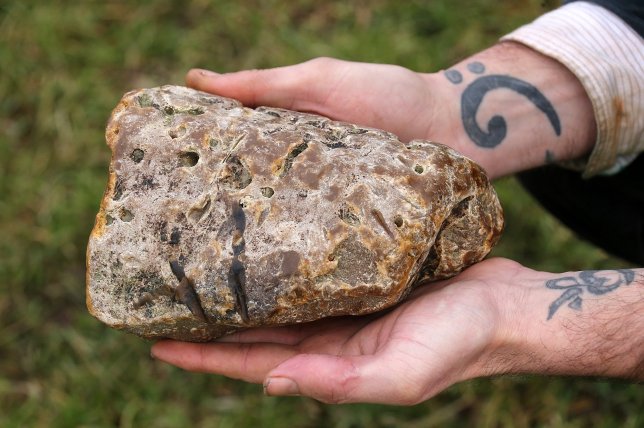 Ambergris is a whale product, a waxy substance now used chiefly in the manufacture of perfumery. Its only known source is the digestive tract of the sperm whale or cachalot, but the details of its formation are not entirely understood.

The presence of ambergris is generally considered evidence of illness on the part of the whale, and it probably is formed as a direct result of the animal’s food habits.

Aside from being found in the body of the whale itself, a lump of ambergris is sometimes discovered floating in the sea or washed up on a beach, presumably thrown off by a whale.

Many seafaring men have felt their hearts jump into their mouths at the sight of a large, irregular-shaped grayish mass floating on the water, for the material is worth from fifteen to thirty-five dollars an ounce, depending on the amount available.

The hearts of the majority, however, have shortly dropped into their boots when the substance was identified as a mass of soap, fat or other valueless material. Nevertheless, anything found in the ocean or on the shore that resembles fat or soap should be taken for identification to a museum, despite the possible apoplectic comments of the overworked staff.

Most pieces of ambergris that have been found have been rather small, but a few large masses have been discovered. The largest of which there is definite record weighed approximately goo pounds and was found near’ the coast of New Zealand.

The largest piece known to have been taken from the body of a whale weighed about 750 pounds. This lump was found by the crew of a whaling ship and was probably of sufficient value to make the men forget all about whaling for the remainder of the voyage. Only recently a 252-pound piece was found by two Long Island fishermen.