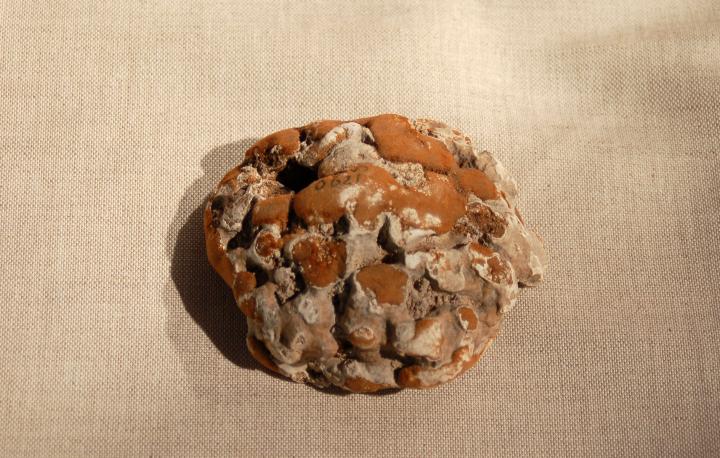 Madstones are pebbles used as amulets, which were formerly thought to have great medicinal value; even today they are in much demand for this reason in parts of the Far East.

Some writers use the terms madstone, snakestone, and bezoar synonymously, but in the United States “madstone” is preferred, while in the Far East “bezoar” is more popular.

The name “snakestone” comes from a common belief that the stones are found in the heads of snakes; they have also been reported discovered in the heads of deer, toads and other animals. There is, however, no evidence that they are normally present in the head of any animal.

Differing in size, shape and color, they may be round or oblong, as large as a small peach or an inch or so long, and white, black or brown.

Some of these fabulous pebbles have become quite famous in the past, and one of them is said to have been the amulet or charm described by Sir Walter Scott in his novel, The Talisman.

Many of the stones have been in the same family for generations and consequently, their origin is uncertain. However, it is likely that most of them were originally obtained from the stomachs and intestines of animals.

A foreign substance sometimes gains access to the digestive tract and lodges in the stomach where eventually, in goats, antelopes, deer, and related forms, it is formed by accretion into a stone. Simple balls of hair found within the stomachs of these animals, as well as genuine stones and concretions, are also frequently called madstones and bezoars.

As far as oriental medicine is concerned, the most prized bezoars are obtained from the Persian wild goat, although those from the South American llama and the chamois are also considered useful.

As the name implies, madstones were formerly believed to be particularly effective in treating mad dog bites, although they were also supposed to be efficacious in the treatment of snakebite.

The stone was placed upon the wound and allowed to remain until it dropped off of its own accord, by which time all venom or other harmful matter had supposedly been drawn from the body of the patient.

The stone was then soaked in warm water or milk to remove the poison, and there have been reports that during the soaking process a greenish scum would form on the surface.

There is no scientific evidence that these stones or balls of hair have any medicinal value.