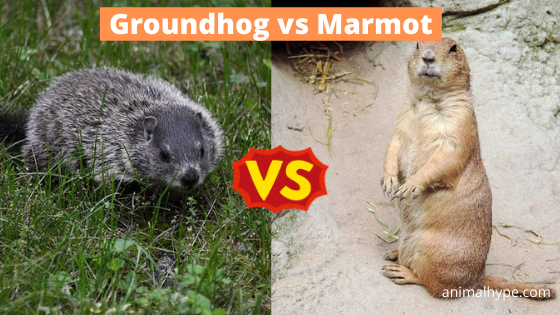 When it comes to rodents, a slender body, sharp and rootless incisor teeth, swift movement, and pesky behavior is obvious. But there are more than 2050 living rodent species on Earth and knowing all of them is quite a daunting task for anybody. But, can we make out the difference between two of these species? So, let’s dig in to know the major and minor differences between groundhog and marmot? How do they differ in appearance, behavior, diet, etc.? We will discuss everything below.

So, what is the difference between groundhog and marmot? Yellow-Bellied Marmots (Marmota flaviventris) and Groundhogs (Marmota monax) differ in their appearance, eating habits, mating, and social skills. However, they descend from the same family and genus, Sciuridae and Marmota, respectively. Where the yellow-bellied marmots like to live in the mountains, the groundhogs dwell on the plain surfaces and make burros under the soil. The yellow-bellied marmots, however, make their dwelling inside the rocks.

All these terms are a bit confusing; we understand that. But, remember that just as no two humans are the same, even if we all belong to the same species, there are differences in animals too.

Not considering the emotional intelligence part, we are going to look at the habitat, appearance, behavior, dwellings, damages, and control measures for both these species.

What do they Look Like? Groundhog vs Marmots appearance

Groundhogs are also called Woodchucks or Whistlepigs, and these pesky creatures are known for their damaging behavior and burrowing habits. They grow up to the size of 20” in length and have a 6 to 7” tail. Overall, their weight is somewhere between 6 to 12 lbs.

Furthermore, these types of rodents boast brown colored fur covering a round body shape. Plus, the tail also has some hair. Their legs are short, but they are pretty strong for a 6 lb creature. Since they are predominantly burrowing animals, they have sharp claws that make it easier to dig.

Their eyes are small and round in shape. Lastly, the Woodchuck’s ears are located on the top. Lastly, just like most rodents, they have also got those two dreading and long incisors at the front that helps them gnaw at anything they want.

Coming to the Yellow-Bellied Marmots, these creatures also look like the groundhogs but some subtle differences. Most important of them all is the color and their body texture. Yellow-bellied marmots boast a length between 18 to 27 inches and weigh between 7 to 11 lbs. In simple terms, their size can be compared to an average house cat.

One of the most distinctive factors about the yellow-bellied rodents is the yellow speckles around their necks and white fur between the eyes. Apart from the speckles, their belly is also partially or fully yellow, and on the top, the fur is brown.

To ensure that you have got the right type of rodent out of the two, observe the tail and the head. While the marmots have a big white spot on the forehead, and the groundhogs don’t. Secondly, the marmot’s tail is bushier as compared to the groundhog.

The marmot’s ears are also small and round, and their upper teeth are outwards compared to the bottom ones, similar to the groundhogs.

Where do they live? Habitat and Region

Both types of rodents are burrow dwellers. The groundhogs are found in North America, including Alaska, Alabama, and Georgia. They make the burrows in the ground, and they are master builders.

Surprisingly, a groundhog’s burrows can be between 8 to 66 feet long. Plus, all the pathways are perfectly made to cover a large, and there are multiple exits and entry points. Plus, there are levels of their burrows, and every section has a purpose. There are different sections or what we may call rooms for hibernation, chilling out, and defecating.

In the US and Canada, people also celebrate the groundhog day, which marks the weather change indicating the coming of spring.

To protect themselves from the predators, the marmots build their burrows under the rock, which acts as a shield and works very well as a disguise.

The marmots also whistle to indicate the arrival of an imminent threat. This behavioral tactic is seen in both the groundhogs and marmots.

Nonetheless, even if a predator gains access to their burrows, they are vulnerable and susceptible to get hurt. The marmots and groundhogs can blow some heavy damage to the predators with their sharp incisors.

Groundhogs are not comfortable socializing with the homo sapiens. The fact is that they don’t want to be disturbed and can even attack if you even try to feed them or pet them. They are aggressive and do not like anyone pondering over their territory.

The yellow-bellied marmots are not like the groundhogs, they like to socialize, and their average colony size is 20. But, the irony is that they are not very fond of the plains or urban areas, as we may call it.

The groundhogs can live beneath a yard or even on a farm, but they can become a cause of nuisance and disease. All kinds of marmots, including the groundhogs and yellow-bellied marmots, carry ticks that can cause the rocky mountain spotted fever or even some types of plague. So, even if you wish to socialize with them, don’t. Keep your distance, especially keep the kids and your pets away.

If they are found on your property, you can expect damages to the hoses, wiring, and the foundational construct of the houses.

The yellow-bellied marmots hibernate for at least eight months in the year. This also implies that around 80% of their lives are spent hibernating. The extended hibernation period has also become a cause of rampant weight loss and spiking mortality rates.

We can say that the yellow-bellied marmots are smart eaters as they have developed a behavior to reject the toxic parts of the plants that they like to eat.

This includes different types of grasses, flowers, and a unique flowering plant named forb or phorb. Being a herbivore, folivore, and granivore, the marmots also like to consume seeds, particularly in the late summer season.

Note that the yellow-bellied marmots do not consume insects or any other animal, even though they are living in mountainous regions.

Compared to them, the groundhogs do like to eat insects, mollusks, and bird eggs, including tree barks and leaves. The groundhogs also store fat to make sure they can survive the long hibernation periods.

When they are not hibernating, the groundhogs come out to forage the good for about 2 hours in a day. Foraging includes gathering alfalfa, clovers, and dandelions.

Reproduction and Breeding habits of Groundhogs and Marmots

To completely understand how both yellow-bellied marmots and groundhogs differ from each other, we must also know about their reproductive habits and timelines.

As we have talked before that the yellow-bellied marmots like to live in colonies. Besides, they can also thrive alone or living with their partner. Due to this, they are also identified as polygynous.

Moving on, there are three types of colonies associated with these marmots; colonies, satellite sites, and temporary sites. It is evident that the reproductive rates are higher in the colonies relative to the other two habitats. Plus, the yellow-bellied marmots start reproducing when they reach two years of age.

Breeding is most practiced in the first two weeks after they wake up from hibernation, which means that there is only one season for mating amongst the marmots. After 30 days of the gestation period, the females give birth to 3 to 8 pups in one go, which is often called a litter.

They hustle to establish their dominance over territory and build hierarchies. Then begins the mate hunting exercises. But only the older male can establish their authority, the younger male groundhogs are nomadic, and they have to change their habitat frequently.

The groundhogs too become mature to reproduce at two years, although some females can mate when they turn 1, the success rates are relatively less. With the groundhogs, the litter size is 3 to 5, and the pups leave their mothers after two months.

However, both types of rodents can cause damage to your property and belongings. So, if you sight them near to your house, take prompt and swift action.

Do they also chip on Wood? Why are the Groundhogs called Woodchucks? No, the name Woodchuck is not related to woods in any form or style. This name is has come into the saying because of the Algonquian people, who used to call them Wejack, or Woodshaw or even Woodchoock. So, Woodchuck is a kind of mixture of these terms.

For how long do the Groundhogs and Yellow-bellied marmots live? The marmots can survive in the wild for 13 to 15 years, while the groundhogs can only live up to the age of 2 or 3 years, on average.