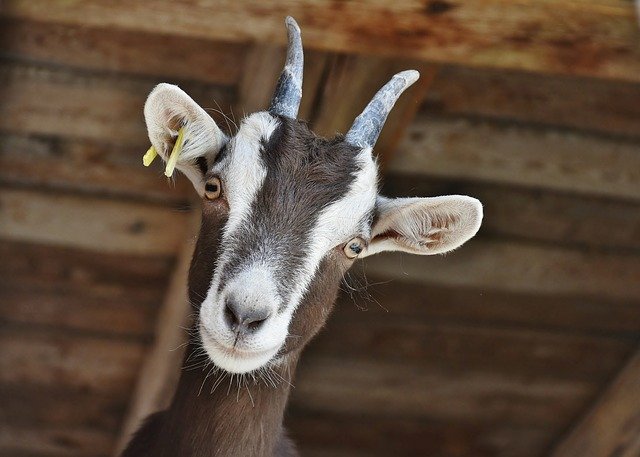 Goats’ eyes are unique and also kind of weird. Their pupils are horizontal slits. This shape is different from the round pupils that humans have. Well, like with everything, the shape of goats’ eyes have a specific purpose, which we’ll explain in this article. Thus, here’s a guide on why goats have rectangular eyes.

The pupils of goats’ eyes are horizontal slits because it allows them to have a larger field of vision on the horizontal plane. Thus, their vision is similar to a panoramic image in which all horizontal distances are clear, irrespective of where they’re focusing. Greater fields of vision help them spot predators from various angles.

In addition to that, the shape of this mammal’s eyes also helps them see better at night. It also prevents them from being blinded by direct sunlight.

Prey Tend to Have Horizontal Slits for Pupils

Goats are not predators. They’re herbivores that search and consume food like grass, plants, and moss. Therefore, they do not hunt for their food. Instead, they are hunted by other predators—which they consume as food.

According to research by Martin Banks et al., the shape of ambush predators’ pupils are vertical slits. On the other hand, prey, like goats, tend to have horizontal slits for pupils. In their case, their vision allows them to see sharp images when focused at a specific distance.

To visualize this, look at something on your screen—an icon or a word. You’ll see that only the image or text you’re focusing on is clear; everything else is blurred. With goats and other prey, that is not the case.

The sharpness of horizontal distances creates an almost panoramic view of everything around them with minimal blind spots. Therefore, they can detect predators from different directions and have a better chance of saving themselves.

Animals that have elongated pupils, whether vertical or horizontal, are typically active during the day and the night, as Martin Banks says, according to UC Berkeley News.

Therefore, these animals (goats included) can see in dim light, which can help them either find prey (for predators) or escape from predators (for prey) in the night.

That said, the elongated shape of their eyes also prevents these animals from being blinded by sunlight.

On the other hand, predators (not to be mistaken for ambush predators) tend to have circular pupils. This includes big cats like tigers and other predators like humans—animals that chase after their food. The circular shape of such predators’ eyes also has to do with their height from the ground, but more on that later.

The rectangular shape of the eyes allows the pupils to take in more light. Elongated pupils can expand more than round pupils, which allows for greater absorption of light.

In general, elongated pupils have a greater dynamic range for light absorption than circular pupils do. Therefore, this dynamic range also enables the pupils to dilate sufficiently to allow goats to see effectively during the night.

At the same time, they don’t absorb much light from sources that are above their heads. That is why they can still forage for grass and find it without the sunlight bleaching their vision.

As we mentioned earlier, goats’ eyes don’t absorb light from sources above them like direct sunlight. Having said that, they maintain that low absorption by keeping their eyes parallel to the ground when they’re grazing.

Even if goats’ heads are pointed downward while they’re eating grass from the ground, their pupils are in line with the ground. This way, they can continue to limit the amount of light that comes in their eyes during the day.

If goats aligned their eyes vertically to the ground, they would not be able to see because of the excessive light in the day. Therefore, the horizontal alignment helps them absorb enough light to see the ground properly without being blindsided.

By maintaining horizontal pupil alignment, goats can still keep their eyes on their surroundings for potential predators. With their pupils in that position, they are also able to get more light in from the front, back, and sides.

Thus, they can see their surroundings a lot more clearly without bleaching from the bright sunlight above.

In the night, their pupils dilate and absorb more light so that they can maintain their vision and stay vigilant.

If goats lowered their eyes when grazing on their ground, their pupils would become more vertical. Therefore, they would not be able to look at horizontal distances clearly, which, in turn, would make them susceptible to attack by predators.

Goats Can Rotate Their Eyes by 50 Degrees or More

This rotation ability is about ten times greater than a human’s ability to rotate their eyes. This way, animals can keep their heads down but their eyes up.

A professor at Durham University, Gordon Love, also observed that other grazing animals, like horses and sheep, could also rotate their eyes similarly and for the same purpose.

Their horizontal pupil alignment helps them see the terrain better when fleeing from predators. Goats need to see where they’re running, and their horizontally aligned pupils help them see through the corners of their eyes.

This ability can make for more successful escapes as goats are not particularly fast runners. With pupils of this shape and alignment, goats’ vision on the center and ground is clear during rapid locomotion.

Information About Animals’ Eyes in General

A large majority of grazers (like goats) and other animals that are prey have horizontally elongated pupils. This shape allows them to have a wider field of vision, which helps them detect predators, and it keeps their vision clear when they run.

On the other hand, ambush predators tend to have vertically elongated pupils. The verticality helps them estimate vertical distances accurately so that they can pounce at their target.

However, all of these predators (ambush or not) with vertical pupils are short creatures. That is to say that their faces are not high off the ground.

Tall Predators Tend to Have Round Pupils

Banks and his co-authors explain that this trend is because taller animals cannot calculate vertical distances effectively with vertical pupils as shorter animals do.

Conclusion: Why Goats Have Rectangular Eyes?

If you’ve been wondering why goats have rectangular eyes, the answer is that it is vital to their survival.

Goats would be unable to detect predators close to them if they didn’t have this defense mechanism. Horizontally elongated eyes help goats take in more or less light, depending on the time of day. It also provides them with a panoramic view, which is present even when they bow their heads to graze.

Goats tend to run away from their predators after they detect them. Therefore, they need to be able to look at the ground clearly when they’re running.

They must also be able to look clearly through the corner of their eyes because if they face ambush predators, they need to see the different angles from which the group of predators might attack them.

Therefore, the horizontally elongated pupils in their eyes help with precisely that.