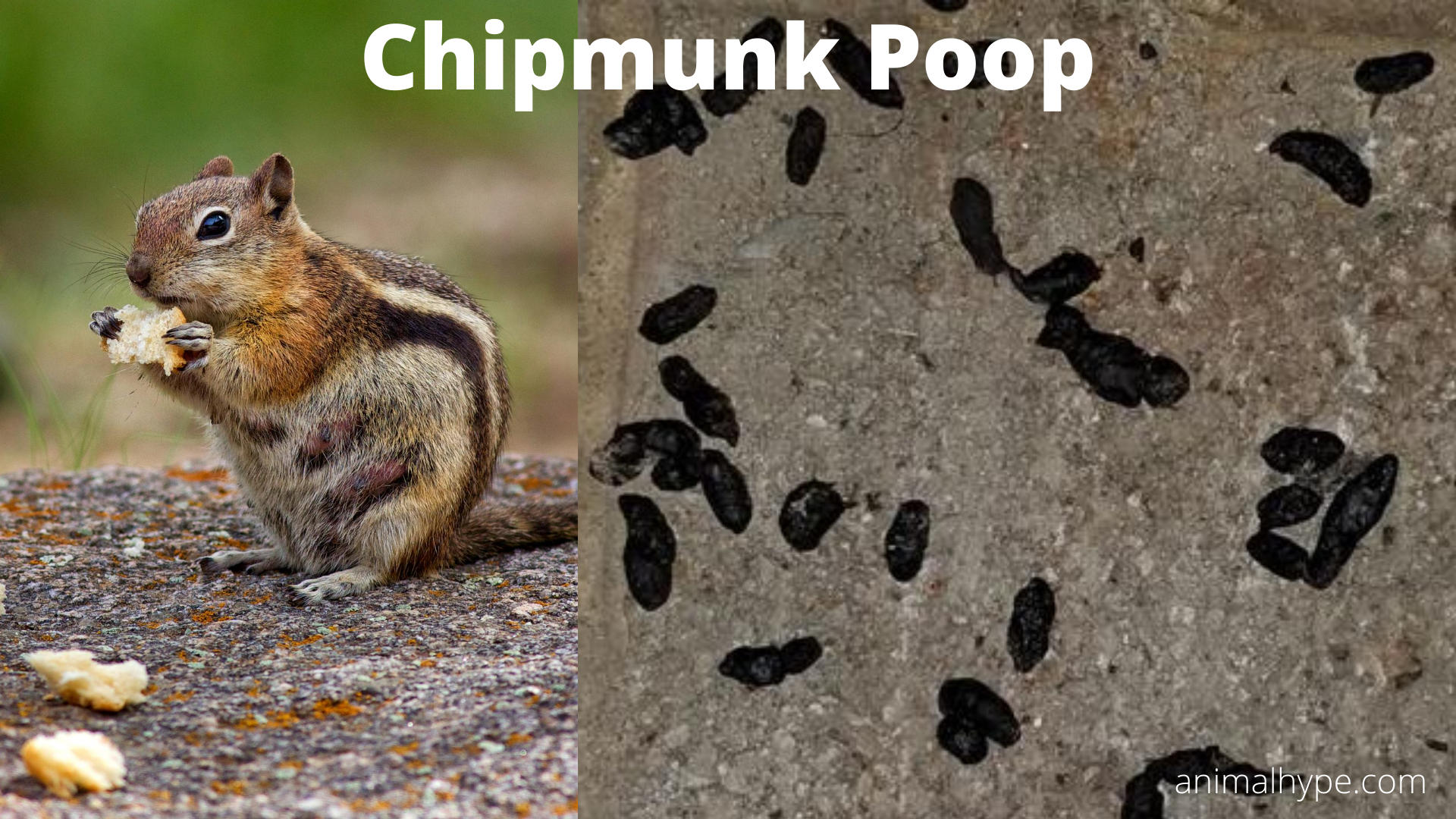 Chipmunks are adorable little critters that are commonly seen in areas in and around human settlements. For most people, chipmunks are nothing more than little furry forest friends.

They can be seen running in your backyard foraging for nuts or small fruits and, at times, even scavenging from the dustbins. Owing to this, most people would find it hard to believe that chipmunks can turn out to be destructive pests and cause you a lot of trouble. But people wonder, what potential harm can they cause?

Though not all chipmunks are troublesome, it doesn’t take them much time to become a troublesome pest. Despite being irresistibly cute, these critters can cause serious damage to your garden by uprooting small plants, flood basements, and cause walls to collapse by digging a deep network of burrows.

Apart from this, sometimes these critters even tend to chew wires, garden furniture, or items stored in the basement to sharpen their incisors. Owing to this, it is important that you get rid of chipmunks before they become troublesome, and the best way to identify their presence is from their poop.

So, what does chipmunk poop look like? The poop of a chipmunk is pellet-shaped with long pointy ends while measuring less than one centimeter. It looks very similar to a rat’s dropping, yet on a closer look, you will see that chipmunk poop is smaller than a rat’s poop. Also, the color of the poop may vary between black and brown, depending on the food they eat.

It is interesting to note that chipmunk rarely poops outside their burrows. Rather they have specialized latrine sites inside their burrows where they poop. This is done to ensure that the predators do not sense their presence and trace by the smell of their poop and trace them back to their burrows.

In this article, we will look at how to properly identify the poop of a chipmunk and other relevant information about them. We will also discuss effective ways to prevent and tackle chipmunk infestation in the following sections.

Chipmunks do not poop – Myth Buster

When it comes to chipmunks, the most widely spread myth about them is that they don’t poop. Most people believe it to be true because they don’t get to see them pooping or see their droppings lying in your backyard.

But this is just a myth, and chipmunks do poop. It is just that you don’t get to see it easily. If you have seen a chipmunk, you might know how vulnerable they are to being attacked by predators. These little critters are virtually defenseless against the larger predators, and all that they can do to stay safe is to stay out of sight.

Therefore, chipmunks have specialized chambers inside their burrows to poop, they don’t poop anywhere except in this latrine site.

Similarly, those chipmunks living in nests and not in burrows tend to choose a latrine site that’s nowhere near to where they leave. This is done to ensure that no predators sense the chipmunk’s presence from their poop’s scent. 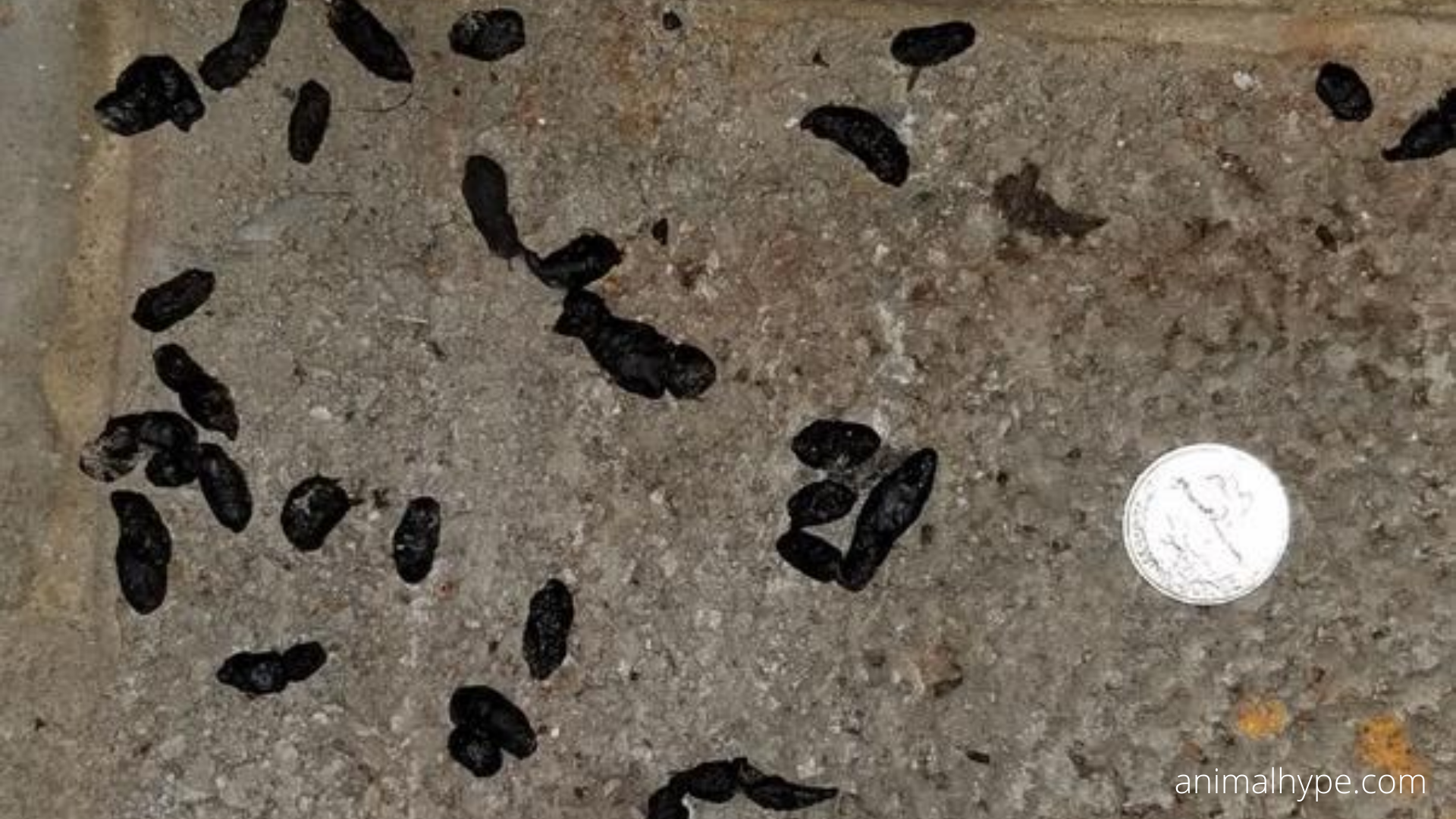 Chipmunk droppings look very similar to that of a rat’s poop. Their droppings are pellet-shaped, with pointy ends and measuring less than one centimeter. They are so small that it resembles the shape of a rice grain.

The best way to identify a chipmunk poop is to look for its distribution. Chipmunk’s rarely poop outside their burrows for the reasons mentioned in the previous section. Even if they were to, they wouldn’t poop wherever they are. Rather, they would choose a safe latrine site.

Difference Between Rat and Chipmunk Droppings 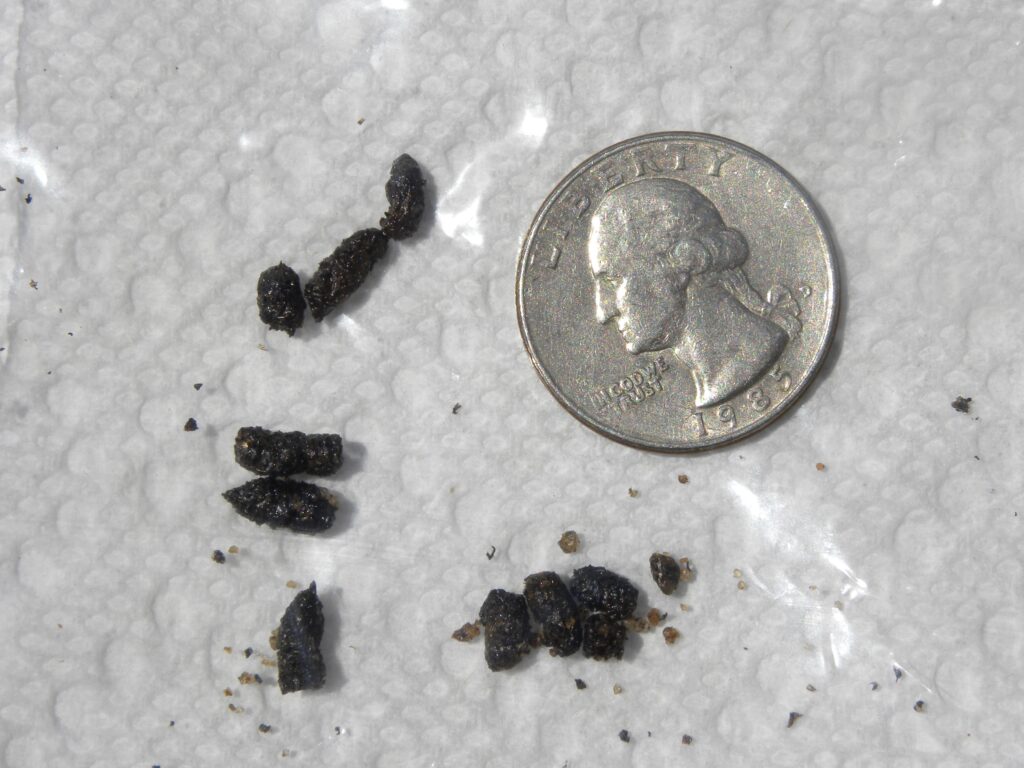 As said in the previous sections, chipmunks and rats have droppings that look similar to one another. And it can be quite hard to identify them properly. But you must identify them correctly so that appropriate steps can be taken to get rid of the infestation.

In this section, we will look at the most effective ways to identify a chipmunk’s poop from a rat’s poop.

On a first look, it may seem to you that both the rat’s and chipmunk’s poop have the same size. But if you have a closer look, you can see that the chipmunk poop is smaller than a rat’s poop.

Another major difference between the two lies in their shape. Due to its small size and thickness, chipmunk poop resembles the shape of a rice grain. Whereas, rat’s poop is bigger and oblong shaped.

Distinguishing poop based on its color is another effective way to identify a chipmunk’s poop from that of a mouse’. Both chipmunks and mice are omnivorous animals, but chipmunks seem to rely more on fruits and nuts as food. Owing to which chipmunks tend to have a paler poop.

This isn’t the case with rats who are more opportunistic hunters. Rats are found to consume everything from small insects, roots of plants, vegetables to garbage.

Their poop has a dark color. It is interesting to note that a rat’s poop is not black as it seems to be. Rather it is just that the poop is so dark that it appears to be black.

As said in the previous sections, you don’t always get to see the poop of a chipmunk. Chipmunks being virtually defenseless against predators likes to keep things discreet.

Chipmunks have specialized latrine sites inside their burrows, and they mostly poop there. Very rarely do they venture out of their burrows to poop. And even if they were to poop outside, they would choose a safe larine site to poop.

This isn’t the case with rats who are not discrete like chipmunks when it comes to pooping. Rats relieve themselves wherever they are, and they would even poop while moving around. In most cases, a rat’s poop can be seen lying scattered or spread out along the way it moves like a trail.

Is it possible to know the extent of infestation from the poop?

Yes, you can identify the extent of chipmunk infestation from their poop. For instance, if you find fresh poop regularly in a specific area, the chances are that there is a chipmunk nest somewhere around.

And the spot where you see the poop might be their latrine site. But as long as the chipmunks do not cause you any trouble, you don’t have to worry.

Similarly, if you were to find a heap of fresh and dry poop, the chances are that you are looking at the latrine site of a chipmunk family.

If this latrine site is near the basement or walls, look around to see any possible opening to chipmunk burrows. Make sure that you properly seal the opening to block their access to the latrine site. 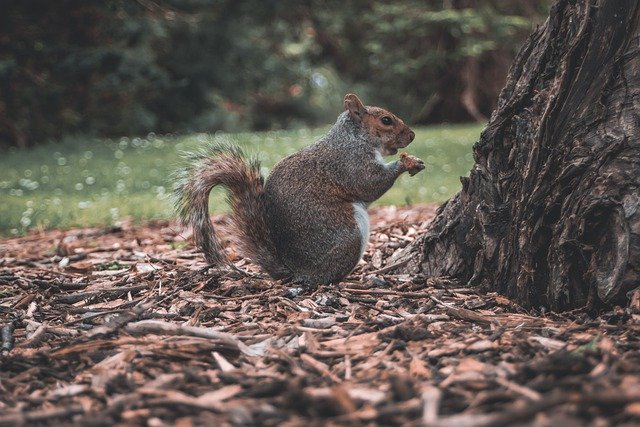 Chipmunk poop is dangerous, as is the waste of every omnivore or carnivore. Due to their omnivorous diet and occasional scavenging, there are high chances that chipmunk poop contains fatal pathogens and viruses.

Because chipmunks don’t poop in the open, it’s rare for humans to come into contact with theirs. But you need to be extremely careful if you have pets at home. There are high chances for your pet to contract diseases from chipmunk poop.

In this section, we will have a look at some of the common diseases that can potentially be contracted from chipmunk poop.

The common diseases that are often associated with chipmunk poop are:

Salmonellosis is a bacterial infection caused by the bacteria of the Salmonella type, and these are commonly found in chipmunk poop. Though not fatal, the symptoms and ailments associated with salmonellosis can last almost for seven days.

Common symptoms include diarrhea, fever, abdominal cramps, and vomiting. The disease is contracted through direct contact by ingesting food or water that was contaminated by chipmunk poop.

Hantavirus is a highly contagious viral disease that is contracted by inhaling virus-containing particles from rodent urine, droppings, or saliva. As said earlier, due to the chipmunk’s discrete nature of pooping, the chances of contracting diseases are very less.

How to safely remove chipmunk poop?

In most cases, you won’t have to worry about clearing chipmunk poop because of the most poop inside their burrows.

But if you were to spot a major latrine site in your backyard in your garden, you should clear it off. This should especially be done if you have kids at home.

Make sure that you take proper protective measures by wearing rubber boots, gloves, a facial mask, or a face shield. Follow these steps for the safe disposal of chipmunk poop:

How to get rid of chipmunks?

Getting rid of chipmunks can be a little tricky because you would never know their presence unless it is too late.

If you were to find them make sure that you remove them safely. Always keep in mind that every organism on this planet has its right to live.

Here are some ways to get the job done without harming them.

As always, prevention is better than cure. Rather than waiting for the chipmunks to infest your property, you should take measures to prevent their infestation. There are some ways in which it can be done.

Trim your plants and bushes such that it doesn’t provide sufficient cover to the chipmunks.

Place L shape footers along the foundation of your house, retaining walls, or sidewalk while constructing the house. Though this may sound odd, it can be an effective deterrent against chipmunks burrowing under your house.

Remove wood or rock piles that are kept against walls or foundations that give them cover to burrow.

Similar to squirrels, chipmunks have an aversion to strong smells. Keeping naphthalene balls in your garden, near walls and near foundation can be an effective deterrent.

Other than these, most squirrel repellents that are available in the market are found to be effective against chipmunks as well.

If you don’t want to opt for commercial squirrel repellents, you can also resort to homemade repellents such as the one made out of Lysol, Epsom salt, and water.

Sometimes irrespective of how many times you remove the chipmunks, they can be so persistent and come back. In such cases, trapping them from your property and releasing them elsewhere can be the best thing to do.

Always resort to humane ways and use a No-Kill trap. Also, note that you are aware of the local laws concerning the trapping and releasing of chipmunks.

Use a small trap and set a bait using nuts or small fruits. Keep the trap in areas of high chipmunk activity. Once it has been trapped release them somewhere far off from your property. Make sure that you don’t harm the chipmunk in any way.

Also, note that you shouldn’t set a no-kill trap or use repellents against chipmunks if it has babies in the nest or burrows. If you suspect the presence of babies, wait until they are old enough before removing them.

Well, it comes to an end, doesn’t it? After reading all of this you should be an expert at identifying chipmunk poop.

So I’d like to thank you for reading this article all the way through. If you are interested to know more about this topic or any others, feel free to shoot me an email with your questions or suggestions for future content.

What better way to wrap things up than with a humorous photo of a chipmunk? Here it is! 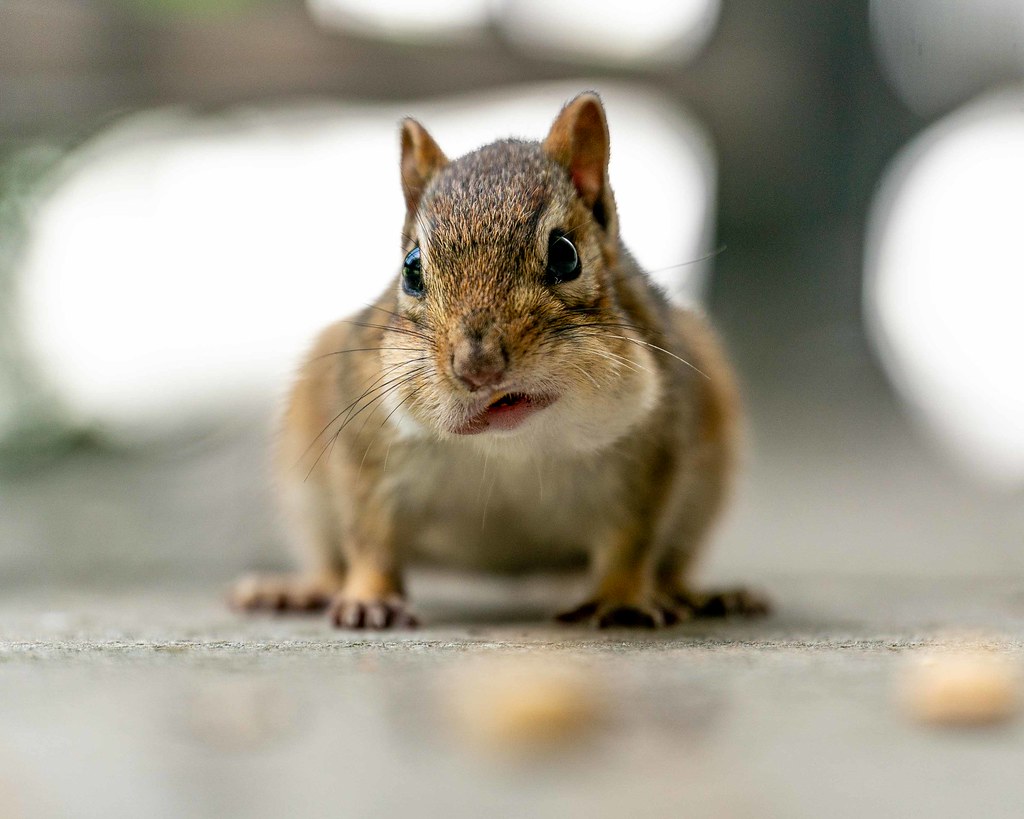