Sloths are mammals that live among trees of Central and South America in the tropical rainforests. They are famous for their extremely slow movement from one place to another. It might be surprising to think that they can paddle themselves across the water. Many wonder whether sloths have the ability to swim? In this article, we’ll answer this question.

So, can sloths swim? Yes, sloths can swim. In fact, they can move thrice as fast in water when compared to their speed on land. Sloths follow a slow lifestyle due to their extremely slow metabolism rates. However, this does not stop them from swimming.

Despite being famous for incredibly slow movement across the land (40 yards in one day), they can swim.

Why do sloths swim?

Sloths are arboreal mammals. This means they prefer movement across trees while living. Besides, they have no adaptations to live an aquatic way of life and do not find food in the water. However, as they live in tropical rainforests located in South and Central America, sloths have to swim for their survival.

In these places, there is a possibility of rising waters due to rain or floods. Hence, swimming is essential for survival. Furthermore, if sloths need to move to a new region of trees, they wait out for the waters to rise to swim and reach their destination.

Swimming helps them cover more ground in less time when compared to their motion across the land. Research also suggests that sometimes, they can use swimming to look out for a mate or to search for new territory.

How are sloths able to swim?

Sloths are reputed as sluggish movers across land and tree. However, it is surprising that they are better swimmers than climbers. This is due to the lowered effect of gravity inside water. This lets them float in water instead of dragging their weight across like they do in the forest.

How fast can sloths swim?

Sloths swim at surprising speeds of 13.5 meters per minute (44 feet per minute). They employ their long hands to propel themselves forward as they move from one island to the other or while crossing a river.

What technique do sloths use to swim?

Sloths are buoyant in water like humans. They use the breaststroke technique to move fast in the water.

How long can sloths hold their breath in the water?

Sloths can hold their breaths for up to 40 minutes underwater. When they swim, they reduce their already slow metabolism further and lower their heart rates to less than one-third of the normal rate. This helps them hold the breath for a long duration.

What adaptation enables sloths to swim?

Sloths are naturally buoyant in water. Besides, they have long arms which they use like paddles to move in the water. They use a unique doggy paddle method to swim thrice as fast as they can when compared to land.

Yes, sloths can swim underwater as they can hold their breaths in water for a maximum of 40 minutes.

Sloths learn to swim when they are babies. They display swimming behavior as a survival adaptation to their habitats. They may hang from trees most of the time but when the situation demands, they can drop from the trees and swim.

How do different species of sloths behave and swim?

The pygmy three-toed sloth was discovered only in the 21st century. It lives exclusively on this island situated 17 kilometers from the Panama mainland.

This is the only type of sloth that swims in salty water. These species swim more often than the remaining species. They usually swim peacefully by lifting only their hairy heads from the sea waters.

Pygmy three-toed sloths can move much faster in water as compared to the land. Hence, swimming is its preferred way of travel.

Maned sloths are known to stay in the trees most of the time due to their inability to walk or stand on a level region. They can only drag their body using claws and front legs.

They also possess three toes and these form their primary defense mode. It has excellent swimming ability in contrast to its mobility on the ground.

The pale-throated sloth also has three toes. They use their claws so effectively to hang in trees that they can even sleep in this posture. They are known to sleep for over 18 hours and make slow movement through the trees. Even though they are mostly tree dwellers, they can swim effectively.

The Brown-throated sloths can walk on the ground. They also spend close to 18 hours asleep every day and are active only for a brief duration. They are also good swimmers but rarely get down from the trees.

Linnaeus’s two-toed sloth is considered the slowest mammal worldwide. They have 3 toes in hind legs but 2 webbed toes in their forelegs. They spend a large part of the day (15-20 hours) sleeping and wake up to eat at night. However, they usually do not pass more than 40 meters in a day.

These sloths fall prey to wild cats like jaguar and ocelots as well as crested eagles and harpy. They become prey when they get to the ground to change trees or to defecate. Besides, Anacondas are also predators of these sloths.

These mammals cross creeks and rivers. This makes them possible prey for anacondas.

Hoffman’s two-toed sloth is very slow on the level surface and land. However, they are effective swimmers. They usually fall from trees of rain forest into the rivers and stroke away with their long hands.

What are the peculiarities of the swimming behavior of sloths? 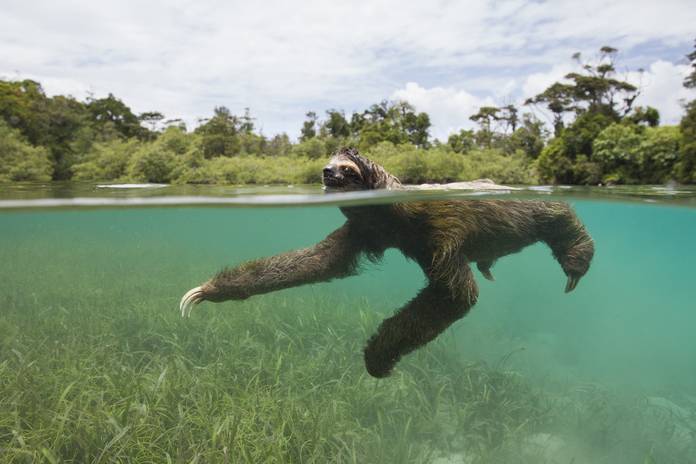 Sloths just jump into the water if they have to change trees. They prefer swimming over crawling on the ground. Since they can effectively float, they find an easy means of travel in swimming. They can move three times faster in water than on land or through trees.

One-third of the sloth’s body mass is due to the leaves present in their stomach. These produce a good amount of gas during digestion. Hence, they are comparable to big balls of gas.

Note that pygmy sloths swim larger distances compared to other species of sloths. However, being a very difficult species to track, there is a clear lack of evidence for this.

Is there any historical evidence for sloths’ swimming behavior?

Research says that the skeletons of sloths are designed in a way that suggests the bottom-walking technique of swimming. This involved moving along the bed of the water body, by pushing off from one point to another, similar to modern hippos.

Besides, the sloths did not move their spines in a wavy undulating manner. Instead, they used their long tails to move ahead. They spent their time in the shallow waters feeding on plants.

What is the habitat distribution of sloths and what is the first evolutionary link to the aquatic behavior of sloths?

Sloths first evolved in South America during a long-isolated period. Later it moved to North America after the Caribbean islands

Based on modern understanding, sloths first stood inside water. After 4 million years, they became swimming creatures who could feed off seagrasses.

Is there evolutionary evidence that suggests the continued aquatic behavior of sloths?

Sloths are not the most impressive swimming mammals. The three-toed and two-toed sloths swim with a doggy style paddle. However, tracing the evolutionary roots, research suggests there was a sloth that made its home in the water.

One major lineage of sloths were sea-dwellers. These swimming sloths lived in the seashore of Peru from 8 million years ago to 4 million years ago. These regions lacked any trees and the sloths inhabited these stretches. They also depended on the sea for their food.

What is the evidence that ancient species of sloths were adapted to swimming as well as diving?

Note that lungs full of air are necessary to help mammals swim. However, this could also get in the way of their diving habits.

Large air-filled sacs of lungs added more buoyancy to submerged animals. The evolutionary adaptation that developed to counter this situation was bones with added density yet swollen in nature. Several aquatic animals including the giant sloth had this characteristic.

This property allowed these animals to have neutral buoyancy while diving. With this, they had to spend lesser amounts of energy to stay underwater.

Although these sloths did not become the most expert swimmers, they were able to find food and survive in aquatic habitats better. They used their claws to move across the ocean floors and to search for food.

Sloths might be one of the slowest animals on land, but they have decent swimming skills and tend to use them often as you can read above.

Do Sloths Have Tails?