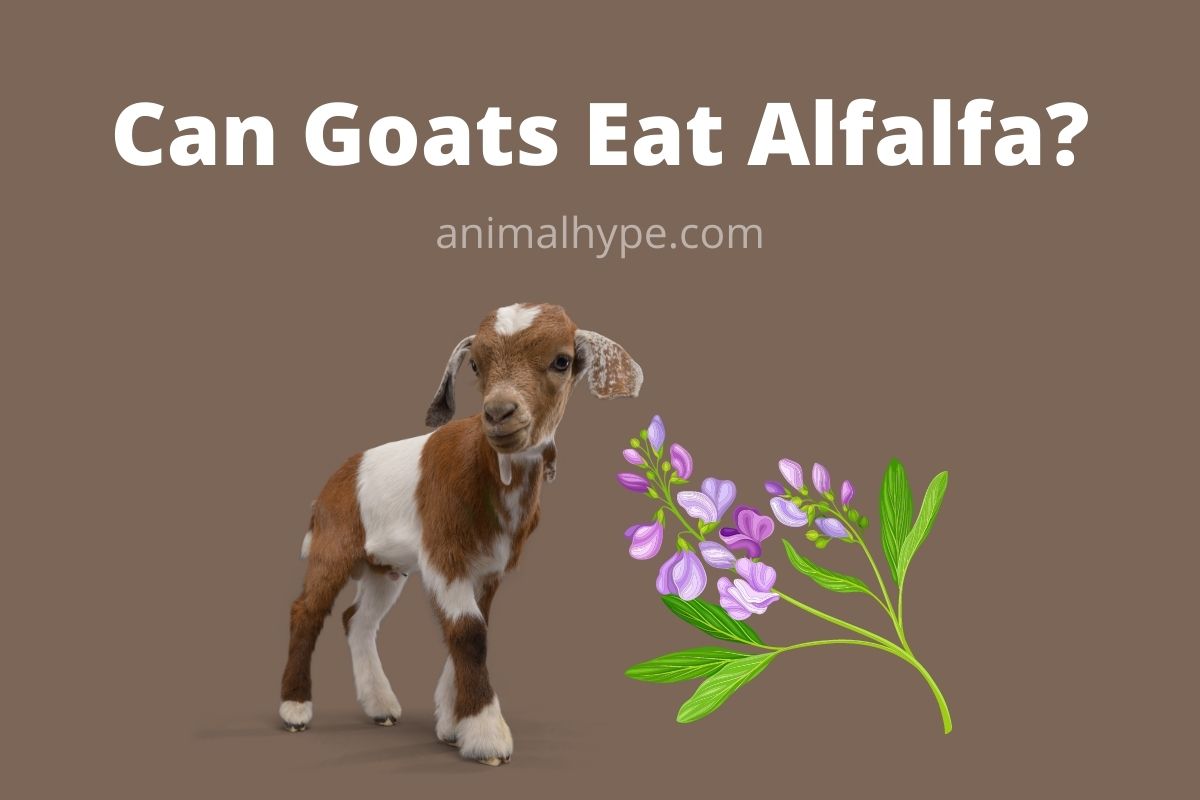 If you are having trouble deciding if your goats can eat alfalfa you have come to the right place. Here we will tell you what alfalfa is, how much to feed alfalfa and when to feed it to your goats in order to keep them happy and healthy.

Can goats eat alfalfa? Goats naturally love eating fresh alfalfa hay and also its seeds, both in sprouted and raw forms. Alfalfa is rich in protein and calcium which are extremely beneficial for pregnant and lactating goats. Moreover, feeding alfalfa to goats in winters can keep them warm. However, alfalfa should always be fed to goats in moderation.

Alfalfa hay is a popular type of hay fed to goats. Although it can be used for all goat types, it is especially good for breeding and milk-producing does (female goats). It has more protein, vitamins, and minerals than grass hays.

Did you know that alfalfa is one of the oldest crops that is solely cultivated for foraging purposes? It is used for grazing, silage, hay, green manure, and cover crops.

While it is popular as “alfalfa” in North America, South Africa, Australia, New Zealand, and the United Kingdom, it is referred to as “lucerne.” Alfalfa grows best in warmer, temperate climates and consists of small, purple flowers. The sprouts of alfalfa are also a part of South Indian cuisine.

As livestock fodder, alfalfa is fed to the goats and horses, sheep, rabbits, cows, and buffaloes. In this article, we will learn about the nutritional value of alfalfa, its health benefits for goats, the forms in which goats can consume it safely, and more.

The nutritional value of alfalfa hay

Before we proceed to talk about the pros and cons of feeding alfalfa hay to your pet ruminants, wouldn’t you want to learn more about what it has to offer?

To better understand the nutritional value of this hay, we have curated a table below which depicts its nutritional composition as a forage crop. Take a look:

Now that we have a better idea about the nutritional content of alfalfa hay, we can talk about its health benefits for goats:

The best part about feeding alfalfa hay to your goats is that its Ca:P ratio is 5 to 1, making it an ideal supplement to go with grains.

Most grains are usually high in phosphorus and, if consumed in abundance, can make your pets calcium deficit. However, if you feed them grains and alfalfa hay, its high calcium content will help keep their diet balanced.

Beneficial for the pregnant and lactating female goats

When a doe starts lactating, it needs more than twice the amount of protein as regular goats. Alfalfa is one of the few hays that contains enough protein to meet the needs of the lactating doe. However, suddenly feeding a large amount of alfalfa hay is not healthy for a new mother doe, either.

This is why you should start adding alfalfa to their diet about 6 weeks before they start kidding so that their body gets used to the extra protein. Begin by feeding them the hay in small amounts, and increase it gradually.

A great source of Calcium for the growing kids

As evident from the table given above, alfalfa hay is also a great source of calcium. And kids, when they’re growing up, can benefit from a high-calcium intake. You can add alfalfa to their diet from the beginning and switch to grass when they’re about 6-8 months old.

It keeps them warm during winters

Of all the livestock animals, goats are the ones with the thinnest skin and fur coat. Even during the winters, you will not notice a drastic change in the length or density of their body hair. This makes them more vulnerable to harsh winter climates than other animals like sheep.

One way to keep your pets warm during the winters is to feed them plenty of quality forage, such as alfalfa hay. Since the digestion of alfalfa involves bacterial fermentation in their rumen, which releases heat, it can keep them warmer.

While there are many benefits of feeding alfalfa hay to the goats, we must not forget that too much of anything is not a good idea for them. As we’ve discussed, alfalfa hay contains calcium and protein in abundance.

And while there are instances when goats can benefit from the extra amount of these nutrients, is it okay to feed them these all the time? Let’s find out:

Unless a goat is in the initial stage of their lives, is pregnant, or lactating, there’s no point in adding extra nutrients to its diet.

In other words, the dry does (the ones that aren’t pregnant or lactating), and the bucks (that are perfectly healthy) have no use for these nutrients in excess.

And since alfalfa hay is quite an expensive feed for your pets, feeding them to your goats when they don’t need it would be an unnecessary expense for you.

Some of you might not know this but calcium, when it enters your pet’s body, has a tendency of binding with zinc.

This means that if your pets are consuming more calcium than zinc, it could lead to zinc deficiency, which could lead to several health problems like:

The deficiency of Zinc is more brutal for the bucks than the does.

Excess protein is never a good idea for the goats unless they have immediate use, like in pregnancy or milk production.

Unlike fat or carbs, protein cannot be stored in their body for later use. Therefore, any extra protein goats eat will ultimately be converted into urea and be excreted from their body in the form of urine.

Moreover, if their kidneys are converting extra protein into urea regularly, it can take a toll on them as well, leading to kidney damage in many cases.

Lastly, high-quality alfalfa could also potentially lead to the painful condition of frothy bloat in goats.

Remember how we talked about alfalfa flowers at the beginning of the article? These purple flowers of the alfalfa plants are later converted into fruits, and every single fruit consists of roughly 10-20 seeds.

These seeds are just as nutritious as the alfalfa hay, if not more. They’re rich in antioxidants, Vitamins C and K, folate, magnesium, and copper.

If you’re wondering whether or not can these seeds be fed to your goats, the answer is: yes but in moderation. And if you plan on feeding them alfalfa seeds, a healthier way to do it would be sprouting them.

You can either purchase sprouted alfalfa seeds from the market or online or can sprout them at home. All you need to do is soak them in a bowl of water overnight, drain the water the next morning, rinse them, and store them in a dry and cool place for about 8-10 hours.

How long can my goat survive without food and water? It has been scientifically observed that goats can survive about 3 days without water and roughly 3 weeks without food.

How many times should I feed my goat in a day?

If your pet goat is a full-grown adult, you should leave them to roam and graze freely and provide them with concentrated feed once a day. However, for younger goats, stick to the following schedule:

Alfalfa (Medicago sativa) is a perennial flowering plant in the pea family Fabaceae cultivated as an agricultural crop worldwide.

It has a deep taproot system with an average depth of 1.4 meters give or take, making it drought tolerant. It also has the ability to remove excess sodium from soil which discourages the absorption of salt by root systems.

Alfalfa is packed with nutrition and can be sprouted and fed fresh or dried to goats in raw or hay form.

We hope that you found our article useful! If you have any questions, be sure to leave a comment below. Also, if you think people you know would benefit, we’d love for them to check us out!

If you would like to read more articles concerning what goats can and can not eat, check out our search page, we’ve got a whole host of interesting facts about your favorite topic. I know the saying goes “curiosity killed the cat but satisfaction brought it back” but there’s no harm in being a bit adventurous right?