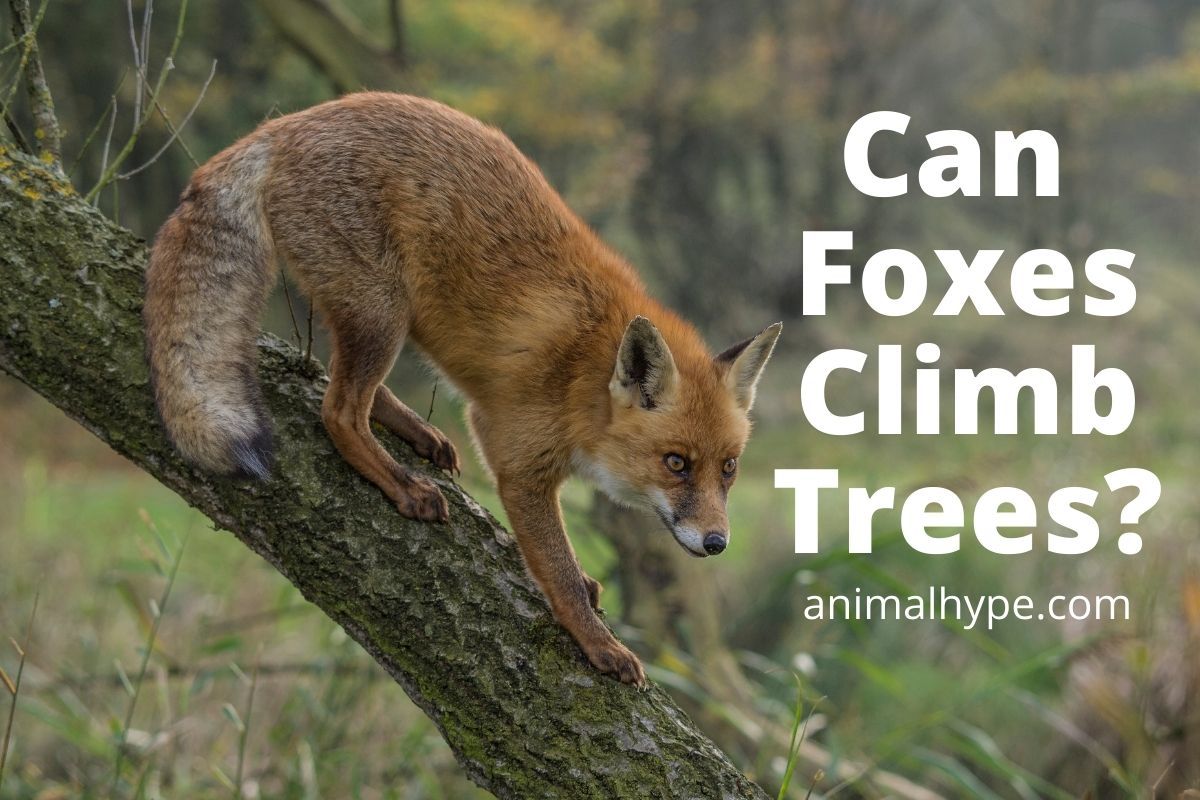 Foxes are part of the dog family, which is also known as the Canidae family. Coyotes, wolves, and raccoon dogs also come under this category. Foxes are great at adapting traits according to their environment and are naturally active and innovative. They resemble small and furry tailed dogs which snout narrower than the rest of its family members. These cunning beings share several traits with their cousin, the raccoon dog.

So, can foxes climb trees? Yes, foxes can climb trees, especially the gray and red foxes. They share this characteristic with raccoon dogs. Climbing trees helps these foxes to repel predators and find food. This ability also provides them a way to rest on trees. In fact, these animals also have the ability to climb down with their tails first. However, this trait is not very active in all the foxes but can be witnessed in a few of them.

Now, what are the traits that help foxes climb trees? Let’s have a look!

Foxes possess naturally gained physical traits that have enabled them to climb trees over the generations. The traits mentioned below are not common to all species of foxes but are usually found in the climbers.

Claws that are always out of the animal’s body help foxes get a good grip over tree trunks and climb easily.

Foxes can dig into the tree deeply and support their heavy body while climbing up or down.

Such claws also help with the instant or immediate movement of the animal in case of danger or sudden attack.

While climbing trees, foxes jump towards the trees with full force. Their naturally strong hind legs grab on to the trunk powerfully so that the lower body can plant on it easily.

These powerful legs ensure no sudden jerks that could occur while jumping on or off the tree. Moreover, they work great in pulling the body forward during the climb.

Reliable forelegs are as important in climbing as the hind legs are. Forelegs play a major role in firmly placing the entire body on the tree trunk once the hind legs grab it.

This way, the body is able to maintain a balanced position and not slip down from the tree suddenly during the climb. Powerful forelegs play a major role in maintaining speed as well.

Even though foxes have strong legs, nature has provided them with flexible ankles as an added benefit. Due to this, they are able to turn or switch paths in case of a sudden attack or while chasing their prey.

Another important trait that has aided foxes to become such active climbers is their rusty fur.

Fur coating that looks rusty or even striped lets foxes camouflage among the trees. This keeps them safe from predators already present on the trees.

Thus, foxes are able to climb and sleep on trees in the scorching heat. They can even sleep inside bird nests such as those of owls or hawks.

All these features make foxes excellent and confident tree climbers. It should be duly noted that foxes were not always climbers. These wise mammals have developed such traits in order to keep their species alive and thriving amidst the extreme danger of the wild.

How To Make A Healthy Environment For Tree-climbing Foxes?

As stated above, foxes are adaptable creatures and can easily adjust. They make good pets and do not require extra care or attention.

Although an important thing to remember while taking care of foxes is their tree-climbing ability, they might want to climb trees, chairs, tables, etc., even when indoors.

This does seem cute and cheerful but might hurt the animal if not taken care of. Therefore, below mentioned is a list of things to check on when petting foxes.

Keep away from pesticide sprayed trees

Not only do foxes climb trees, they even tend to eat its wood. Therefore, ensuring no pesticides near the objects they like to climb can save them from grave dangers that may arrive out of the blue. Moreover, fake trees and branches that have paint or any other coating can also affect them.

Provide them with a small den

After a long day of climbing up and down things, your little fox is bound to get tired and crash on anything they find comfortable. However, to ensure they get a good night’s sleep every time, it’s important to provide them with a small den.

Foxes generally stay small and, therefore, do not require a very large den. This will make them feel comfortable and safe. Try to leave vacant ground space around their den as they prefer burying their prey and gorge on it later.

It’s a very common misconception that all foxes like meat. Foxes that are proficient in climbing trees prefer gorging on foods that are found on trees.

Fruits and vegetables are a favorite to them and keep them strong. Foods such as onions, avocadoes, grapes, etc., come under toxins for foxes.

You may also feed them on bugs such as crickets, cockroaches, and even grasshoppers.

Foxes are not good with extreme climates, be it very summers or very cold winters. They enjoy moderate climates that keep them going for a long time.

If kept in harsh climates, their den or the living space should provide them with plenty of shade and protection. Give them a weatherproof den that can survive rains as well.

Foxes are small but territorial animals. They are extremely wild creatures and seldom prefer compact or confined spaces.

Due to their small size, some might consider them weak and submissive creatures. However, they might prove extremely dangerous and attack if not be careful.

As prevention is better than cure, going through the several cons of keeping foxes as pets can prove fruitful in the long run. Have a look!

Foxes are not known for their hygienic habits and clean surroundings. Being territorial by nature, they mark their region with urine.

If you keep a fox at home, you will soon start noticing the pungent smell coming from your entire house. This smell comes from their urine and fur.

Moreover, this trait is quite strongly imbibed in their nature and is very difficult to change through training.

They chew on everything

They love chewing and gorging on anything they like, sometimes even wood.

If kept at home, they will chew out your entire carpet and bedspreads to shreds. They can be very destructive and difficult to handle. You will have to constantly keep a check on them and keep away from valuables.

These animals have a very shrill and loud voice. They tend to create sounds time and time again and can be heard from a distance.

Nighttime is usually the most common time for foxes to start howling. It is believed that they communicate with each other at night and guide them towards food or away from danger.

Can pet foxes harm their owners?

Pet foxes prove good for the right people. Although they are dangerous in the wild, they possess a loving personality. They can learn to love the people around them if raised properly. However, taming or managing an adult fox can prove dangerous.

By providing the right amount of care and keeping them in the right environment will make them grow fond of you. This will reduce the chances of them ever attacking you.

Can foxes be trained in climbing trees?

No, climbing trees is a natural trait which most fox species have in them. However, if you have a fox that does not belong to those species, teaching them climbing could be hard. This is because they would lack a number of physical traits that can help them climb.

For instance, curved claws and flexible ankles. Without these characteristics, making foxes climb trees can hurt them.

Which fox species are known for their tree-climbing abilities?

The two most common species that are popular tree climbers are Gray fox and Red fox. Both the species love climbing and prove to be excellent survivors. They can jump off tall fences, and repelling predators is a cakewalk for them.

What are other important abilities of foxes?

As is quite popular, foxes are wise, cunning, and creative animals. They have a higher intellectual capacity than most animals. They are graceful and quite fast. Speed is a very important trait that foxes possess. This helps them hunt and also sprint away from danger.

Fox is one of the most gorgeous and fascinating creatures in the wild. Over the centuries, these animals have been able to survive in extreme scenarios and eventually acquire several new traits. Wilderness experts expect foxes to acquire even new traits in the coming time.

They also expect some species of foxes to live in the very deep reaches of forests and possess abilities and strengths that are completely unheard of.