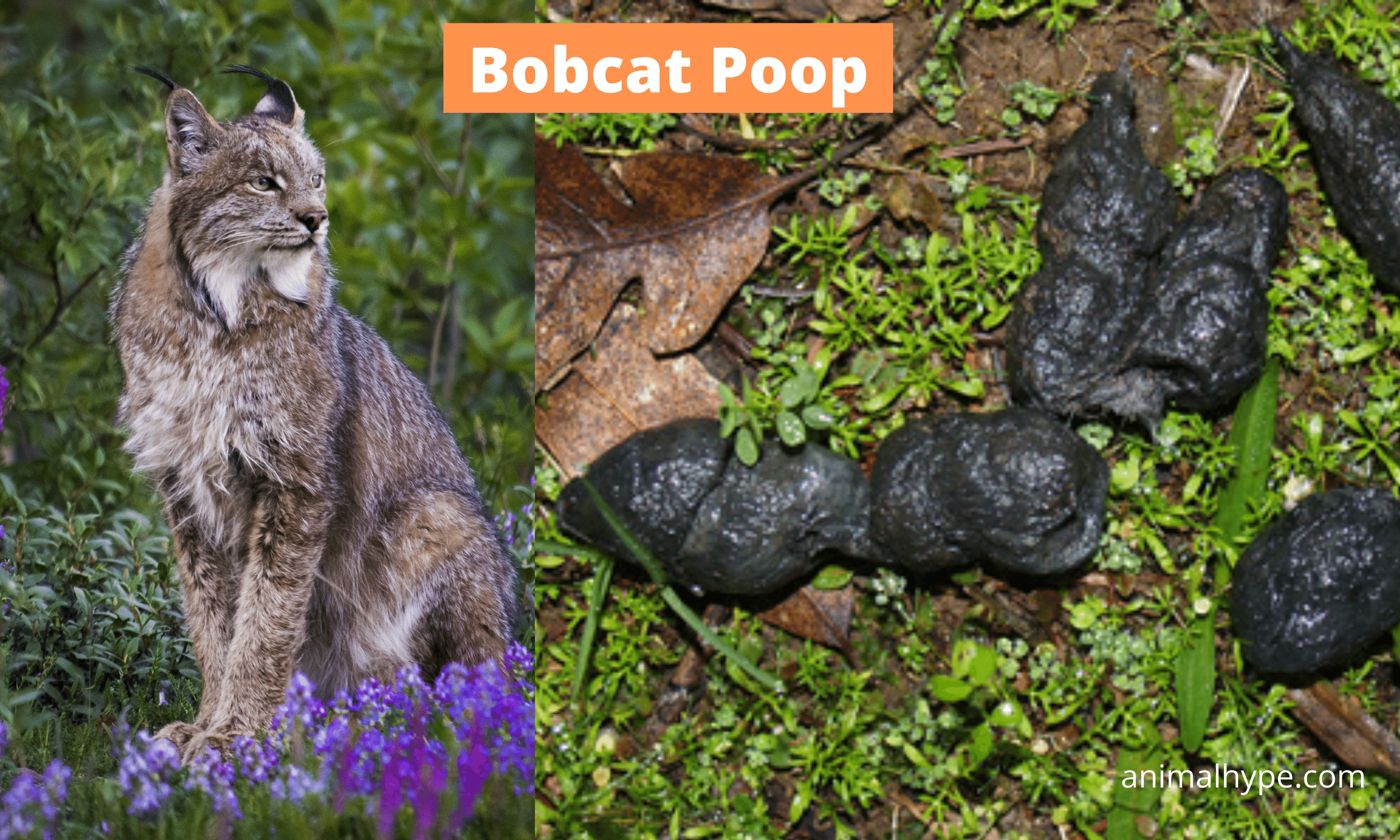 If you have been finding the half-eaten carcass of rabbits and hares in your locality, it is likely that a Bobcat has been frequenting your neighborhood. But how would you find out for sure? Bobcats are crepuscular beings, hunting mostly in twilight and are, thus, rarely encountered by humans.

If you are looking for a way to confirm the presence of a Bobcat in your neighborhood, looking for their scat is the best alternative. Although most people find scat identification gross, it is actually very useful in tracking down wild animals, especially Bobcats, that use their feces to mark their territory.

In this article, we will tell you everything you need to know about the Bobcat scat, from its appearance to its contents. Moreover, we will also tell you how to distinguish their scat from the droppings of other animals. 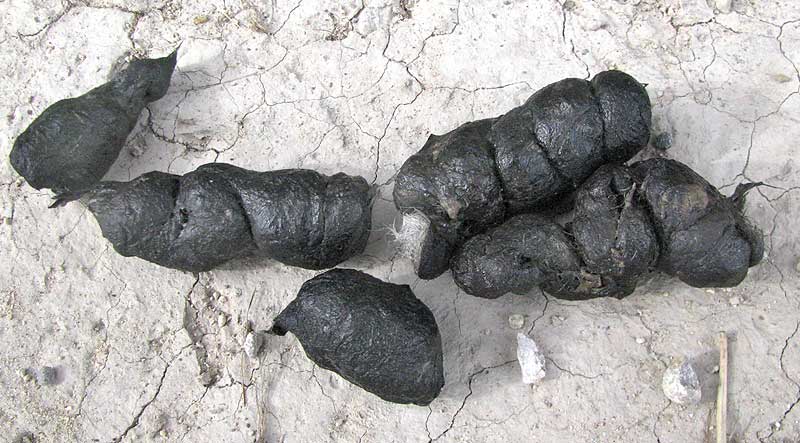 The Bobcat poop is often compared to Lynx poop because of its similar length, color, and texture. It ranges from brown to black in color, is about 4 inches long, and has a diameter of 3/4th of an inch. It has segmented, blunt ends. When wet, it appears to be smooth and shiny, while it hardens up considerably when it dries.

The texture of a wet Bobcat poop is different from that of the dry one. When wet, it is smooth and has a sheen over it. However, when it dries up, it hardens and turns a little dark in color. If you find a wet scat, a Bobcat is probably close by.

The color of the Bobcat scat ranges from dark brown to black. Its coloration resembles that of the Coyote’s scat most closely.

The scat of Bobcats has a roughly tubular shape and reaches the length of 4 inches on average. Its thickness (diameter) is 3/4th of an inch. Their scat is usually one long string with two or three additional shorter strings. The ends of the scat are blunt, with several segments in between.

Although little is known about the smell of the Bobcat scat, an effective way to recognize the scat using smell is to look for the smell of bobcat urine. Bobcats have a tendency to urinate close to the place where they poop.

The smell of the urine is somewhat pungent, like a cat’s urine. However, if you arrive at the location hours after they have defecated/urinated, you’re probably not going to find any smell at all. These smells dissipate quickly.

Bobcat’s scat is often located near scratch piles that are soaked with their urine to mark their territory.

The content of any scat depends on the diet of the animal who has defecated. In the poop of a Bobcat, you are likely to find the bones and fur of their prey.

Bobcats are territorial animals that keep their activities confined within their territory. The territories of these animals are also very well-define.

To achieve this, they use three methods: pooping, urinating, and scratching the trees on the boundary. Therefore, if you find a trail of Bobcat scat distributed methodically, you’re probably in their territory.

Bobcats have a peculiar habit of covering up their poop with whatever they can find in their surroundings (usually, dirt, snow, soil, or leaves) once they are done. Therefore, you will often find their scat covered. 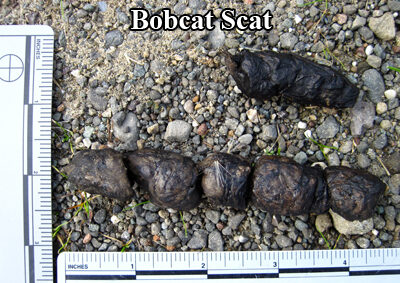 In the last section, we talked about how to identify the scat of a Bobcat based on its texture, color, length, shape, and smell. If you pay close attention to these, you will easily be able to identify whether the scat you’re looking at is of a Bobcat or not.

Finding the Bobcat is indicative of the fact a Bobcat is somewhere close by. However, is there anything else that you can learn from the scat? Yes. By examining it closely, you can find out what its contents are, which can give you a clear idea of what they’ve been eating.

A close examination of the Bobcat scat can indeed be helpful to you. However, if you don’t tackle it properly, you can also end up getting seriously ill. There are many diseases that can spread to humans and other animals through the Bobcat scat (we’ll talk more elaborately about it in the next section).

Therefore, you must take your safety seriously around the Bobcat scat. You should wear face masks and gloves. Even then, try using a stick to prod the scat instead of doing it with your hands.

Can Bobcat poop spread any diseases? 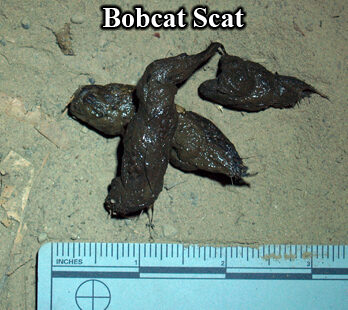 Yes. As we mentioned above, coming in close contact with the Bobcat scat can lead to several diseases, both in humans and the other animals. Let’s take a look at these diseases and how they affect us:

It is not uncommon for the Bobcats to carry the toxoplasma gondii parasite in their body. If you come too close to the scat of a Bobcat that is infected with this parasite, you can suffer from a disease known as Toxoplasmosis.

The common symptoms of Toxoplasmosis are similar to that of the flu, such as fatigue, head and body ache, fever, and swollen lymph nodes. However, if you have an already weakened immune system, are receiving chemotherapy, or have had an organ transplant, you could suffer from severe symptoms like blurred vision (Ocular Toxoplasmosis), seizures, and lung problems that are commonly witnessed in tuberculosis and pneumonia.

If a pregnant woman gets infected by the toxoplasma gondii parasite, Toxoplasmosis can also transfer to the baby in the womb. In new-borns, the symptoms of this disease are eye infection, yellow of the whites in the eyes as well as the skin, seizures, and an abnormally enlarged spleen and liver.

Apart from humans, animals can be infected by the toxoplasma gondii parasite as well. The cases of Toxoplasmosis are most commonly seen in pigs, sheep, goats, dogs, cats, and rodents.

Cryptosporidium is a genus of protozoan parasites found commonly in Bobcats. Coming in close contact with the feces of an infected Bobcat can lead to Cryptosporidiosis. If you have caught this disease, you can suffer from symptoms like stomach cramps, fever, nausea, frequent diarrhea, and vomiting.

If your pet dogs and cats are exposed to the infected Bobcat feces, they can be infected with this disease as well.

Giardia Lamblia is a microscopic parasite that spreads through some animals’ feces, Bobcats being one of them. If humans contact the infected feces, they can suffer from a small intestine infection known as Giardiasis, also referred to as the “Beaver fever”.

Once you’re infected with G. Lamblia, it might take a week or two before you start displaying the symptoms, such as fatigue, nausea, loss of appetite, vomiting, excessive gas, bloating, abdominal cramps, weight loss, diarrhea.

Besides humans, Giardiasis can also spread both in cattle as well as household pets such as pigs, sheep, goats, horses, cats, dogs, etc.

Bobcat Fever (Cytauxzoon felis) is a tick-borne disease in the cat community. It has been named after the Bobcats since they are its primary hosts. The initial symptoms of this disease are loss of appetite and sluggishness. However, once the infection begins to spread inside their body, their health deteriorates pretty quickly.

In about 20 days, your cat will display symptoms such as high temperature, jaundice, dehydration, respiratory distress, pale mucus membranes, and enlarged spleen and liver.

Differentiating Bobcat scat from the droppings of other animals 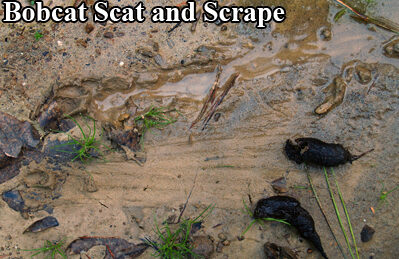 We now have a detailed description of Bobcat scat. However, did you know that there are other animals that have similar poop as well? Some of them have a similar colored scat, while others have the same tubular shape. With these animals around, it is easy to get confused about whose scat you have found.

Let us compare Bobcat scat to that of the other animals to eradicate any chance of confusion:

Out of all the animals on the list, the Lynx scat resembles the Bobcat scat most closely. It has similar coloration and length to the latter. The only distinguishing factor between the two is the litter (soil, leaf, etc.) scattered around the Bobcat scat.

The scat of Coyotes has the same length and thickness as the Bobcat scat. However, Coyotes are omnivores, unlike Bobcats that are obligate carnivores. Therefore, if you can find the remains of fruits (seeds, pits) in the scat, it is probably Coyote’s scat.

The Fox scat has half the length of Bobcat scat and is not as thick either. They also have pointy ends, unlike the blunt-ended Bobcat scat. Moreover, since Foxes are omnivores, you can find undigested parts of fruits and berries in their scat.

The Pine Martens have a peculiar habit of wriggling their hips while defecating, making their poop twisted. They produce a single, long string of poop coiled in shape and has tapered ends, unlike the straighter and shorter Bobcat scat.

Otters’ droppings are darker in color than the Bobcat scat and have a peculiar, musky smell. Moreover, their scat’s main contents are fragments of shells and fish scales because of their mostly aquatic diet.

Quite similar to sausage in shape, the scat of a Hedgehog is always black in color with a shiny gloss over it. Unlike the blunt ends of the Bobcat scat, these droppings are tapered at one end and rounded at the other. Their diet is very different from the Bobcats as well. Therefore, you will mostly find remains of berries and insects in their scat.

It is relatively easy to distinguish between the scat of Mountain Lions and Bobcats because of the considerable between their size. Mountain Lion scat is bigger and thicker than Bobcat scat, being 5 inches long, with a diameter of 1 ¼ inch.

Just like Mountain Lions, the Bears have large droppings as well, with a thickness of about 2 inches. Moreover, these omnivores feed primarily on fruits during summers and switch to meat in the winters. The contents of their scat help in recognizing it, too.

What do Bobcats eat?

Although we are now familiar with the description of Bobcat scat, to understand what their droppings are made of, we must learn about the diet of these animals.

Bobcats are obligate carnivores that solely feed on the meat of other animals. About 90% of their diet is made up of small mammals such as rabbits and hares. The Cottontail Rabbits and Horseshoe Hares are their favorite.

However, when these become scarce in their region, Bobcats prey on other mammals like Porcupines, Mountain Beavers, Possums, and Marmots. Among rodents, they feed on squirrels, chipmunks, voles, rats, mice, etc. The male Bobcats also hunt the juvenile deer occasionally.

Bobcats are solitary hunters, except the females that take their young ones hunting in order to teach them. They have sharp eyesight and an acute hearing ability that makes locating the prey an easy task for them. These animals are stealthy hunters and often attack their prey in sleep.

What to do if you find Bobcat scat in your locality?

If you have been finding Bobcat scat in your neighborhood for quite some time now, it is a sign that you need to be careful. Although Bobcats usually don’t mess with humans, it is not an impossible concept.

If a Bobcat has Rabies, they are more likely to attack humans, especially defenseless children. Moreover, there’s also the risk of diseases their droppings can spread.

Here are the things you should do if you find Bobcat scat in your locality: