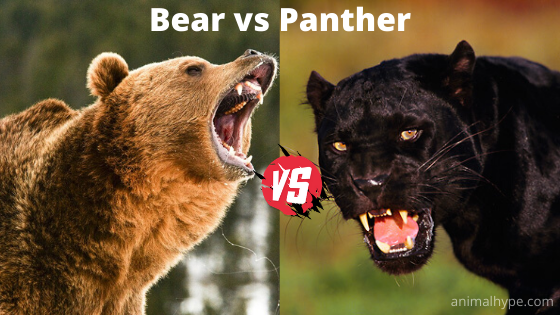 Unless we’re talking about the match against Chicago Bears Vs Carolina Panthers, match of the Exotic Feline with Majestic and mighty bear in the wild would be a rare yet gripping sight.

Our contenders in this battle are Bear and Panther, both having amazing abilities. This article walks you through each of them before the finale takes place.

Bear vs panther, who will win? Bears are sure to win this fight. Bears are a lot stronger and bigger than panthers. In a fight between a panther and grizzly bear, there is no chance for panther to win. One swing from the bear’s razor-sharp claws can tear off the panther’s skin. Due to the bear’s thick fur panther can’t attack its neck and will therefore lose.

Let’s go into detail and get to know both of them in detail and discuss their strong and weak points. 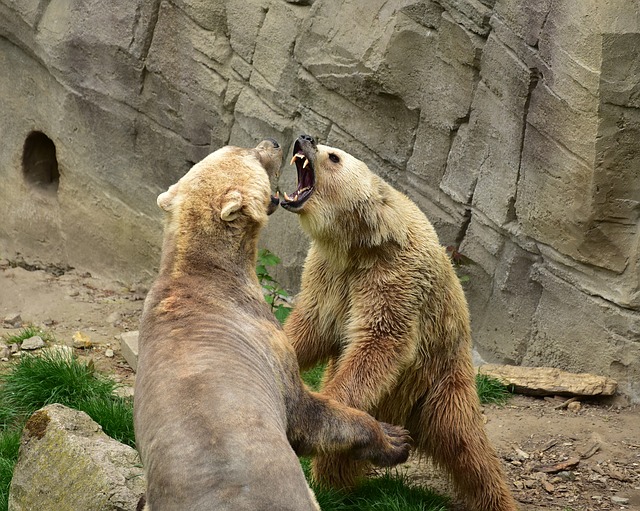 Bears are the largest Apex predators on land, and they hunt down preys larger than themselves. There are a variety of bear species. Each comes in several colors across the spectrum.

Variation in sizes and anatomy depends on the locations they are found in and the adjustments which are made to their bodies to fit their habitat.

Differences can be hard to tell between species of bears as they shed their fur with the changes in seasons. Even though they are the largest predators, several bears have gone extinct due to humans’ irresponsible activities.

Since the decrease in population of brown bears, strict measures are taken by the government to restore the population.

It has led to their spread over several territories, including North America, Europe, and some parts of Asia, while American black bears are exclusively found in North America.

They are somewhat similar to the Sun bear, which is unique to South America and polar bear, solely present in the Arctic Circle. These two species are listed as vulnerable by IUCN.

Lastly, we have species of the bears who live in Asia, which are Asian black bears, also known as moon bears, pandas, and sloth, of which two species Asian bear and sloth are vulnerable, and pandas are endangered.

Most species of bears are opportunistic omnivores. They consume plants in higher quantities than meat. The only exceptions are the polar bears and giant pandas.

Giant pandas are herbivorous and eat bamboo, which is also available in several types.

According to the article “how pandas survive on the bamboo only diet” written by Sandhya Sekar, pandas consume Arrow bamboo and wood bamboo to acquire full nutrient intake, which is not available throughout the year. They eat roots, shoots, and leaves of bamboo.

These two species are on different ends of the spectrum.

Remaining bear species eat whatever food source is available to them in the current season as they are omnivores. For example- Asiatic black bears consume large amounts of acorns and honey, but in the off-season, they shift to meat.

When bears look for plants to eat, they choose plants that are most nutritious and digestible. This knowledge is their learned behavior.

As per LJ Landriault, M.E. Obbard and W.J. Rettie wild sarsaparilla berries, dogwood berries, raspberries, and blueberries packed with carbohydrates are consumed by brown bears in considerable amount to store up for the coming winter they spend in hibernation.

Insects such as wasps, bees, termites, and ants are eaten by species of bears such as sloth and Sun bear for which they have developed long tongues.

Around June, July, and August, the best hunt in fishes is usually Salmon, which tend to swim upstream. Bears are also known to steal from other animals and feed on carcasses when food resources are lacking.

Bears behave in an unpredictable manner. But each bear has a distinct personality and might react to a similar situation in a different way.

Specific species of bear are good tree climbers. They climb trees when they are hungry, need food, or in need to escape danger. Grizzlies are known to climb trees out of pure curiosity.

Black bears with curved claws which they used to climb trees by hugging with forepaws and pulling themselves up they go down feet first.

Bears are mostly solitary animals and are only seen together when hunting fish in streams in June, July, and August. Other than that, the mother seen with her cubs.

They have round ears and thick fur to maintain warm body temperature, a keen sense of smell with which they can smell the food as far away as 20 miles.

Their long sharp claws (up to 4 inches) are used for climbing, digging, and killing their prey in a single swipe. 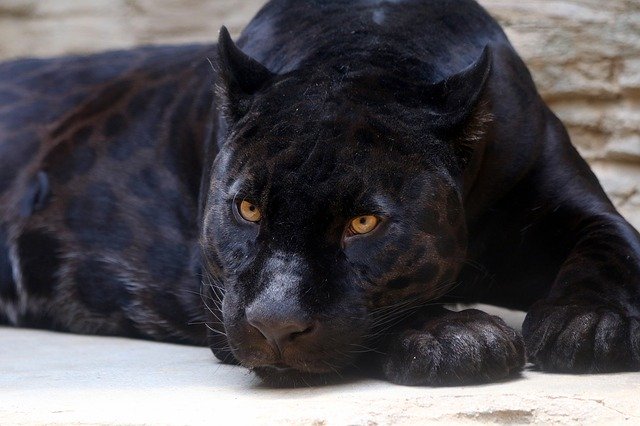 When the mutation occurs in pigment melanin the cubs are born with black fur but the rosettes do not vanish they are just harder to see.

It typically happens in three different types of big cats which are leopard, jaguar, and species of cougar.

On the other hand, albinism is caused when melanin pigment is absent as for species of cougar, however, there are no actual reports known for a pure black panther.

Like any animal, panthers required food, shelter, and water to survive. The populations of leopards are found in abundance in dense rainforests, which is mainly present in the Americas and Asia, but this does not limit them from exploring further and pushing boundaries.

They can survive in dry Woodland swamps and savannas exclusive to Africa. Their population is decreasing at a faster rate than expected due to poachers, destruction of habitats, and lack of prey.

They are being hunted for their bones and their fur, which is sold in markets for medicinal purposes. If the government and conservationists don’t stop this bloodbath soon enough, there won’t be enough of panthers to be saved.

Big cats of three species Jaguar leopard and cougar usually have tan fur, but when the amount of melanin is high in quantity, they gain black fur.

Hence, people assume that their rosettes have disappeared, which is untrue; black coat only makes it difficult to see.

It also helps them blend in perfectly to the forest background to hunt at any time of the day. But they prefer hunting at night, which has many benefits.

They can move stealthily, and there are fewer chances of competition. They have very sharp eyesight and a great sense of smell. The strong jaws help suffocate the prey and carry it up the tree where it eats its fresh hunt in safety in the shade of trees away from other predators.

Panthers are nocturnal since they hunt at night. They are very cautious and silent, which is why people rarely ever see them.

Their dark fur helps them to blend into the dark so they can hunt, and during the day, it helps them mix into forest background. Like leopards and jaguars, they rest during the day but also keep an eye out for prey.

They can leap into the air to catch their prey. Since they have multiple female mates in different ranges, they have overlapping boundaries. They face a threat from other males; this makes them very territorial.

What their exact diet is, depends on their location which could be from medium to large-sized herbivores like Deer, Warthog, Wild Boar, Tapir, and Antelope. Some of the smaller prey hunted by Panthers are Birds and Rabbit; they hunt small animals when larger prey is scarce.

Black leopards height and weight according to the book “The behavior guide to African mammals: Including hoofed mammals and carnivores” by Richard Estes.

Bear Vs Panther: who would win?

Winning depends upon several factors such as their weight, size, whether they were fed or not? If they are diurnal or nocturnal? What kind of species are they? What are their ranges? Although several of their ranges overlap and they might get into fights with one another.

Panthers tend to avoid larger animals that are more aggressive and have 4-inch claws to shield themselves, especially when they have the availability of other prey in the area. Either of these parties, if ever came into a confrontation in the wild, will try to run away.

In other cases, we know how territorial a Panther is and how suddenly aggressive it can get, although pitted in a fight against a Kodiak or a Polar bear would not be to its advantage.

If it is a Grizzly that the panther is fighting against, there is no possible way it would win. They are taller in size (1m) and even more on hind legs, have relatively more mass (725 kg) as compared to panther (160kg).

The grizzlies have thicker skin while a panther’s skin is thin, a razor-sharp claw of 4 inches swung on the panther could easily injure it whereas claws of a panther wouldn’t even reach it.

If we consider climbing on a tree as an ambush from a leap of 20ft, grizzly would only fall if panther’s teeth cut through its neck.

It would still be tough considering panther’s bite force is lower (1100 psi). It can only kill herbivores (even though larger than itself).

When compared to grizzly’s, which is up to (1200 psi), so a panther would have to bite down pretty hard to kill a grizzly, and seeing the bite force statistics, it does not sound easy.

Grizzlies can climb trees as well, so escaping won’t be an option. Speed of a Panther(71miles/h) could be a survival benefit from grizzly’s aggressiveness other than that no matter how agile it is while attacking, attacks would be blocked out.

So unless we want a beaten and broken Feline out of an already endangered one, we wouldn’t want to put them in a cage and make them fight.

On the other hand, if the contender were a sun bear the smallest of all of the bears it might win but not without engaging in a rough battle as Sun bears are even more aggressive and sudden in their attacks in comparison to its relative bears, which makes it pretty hard to decide the winning situation as tables can be turned any time on the basis of several factors.

Although bears having superior weapons at hand could easily kill or fight off a Panther, their fight would definitely not be a death-match in the wild.